It’s a shame to see stock shortages again, but we’re hardly surprised. The SNES Classic Mini improves on the NES edition with longer controller cables and some handy new features such as rewind. Whether the games line-up suits your taste, we don’t know but we think you’re getting excellent value for money here – 21 games including the unreleased Star Fox 2, two controllers and hours of nostalgic enjoyment. Let’s face it, this is a must for any Nintendo fan.

The Switch is a great console but Nintendo’s series of Classic Mini consoles provide a completely different thrill. We loved the NES version and now the SNES Classic Mini is here for another hit of retro gaming nostalgia. Here’s our full and in-depth review.

Whether or not you got the first one doesn’t matter too much here, nor does it really matter whether you still own the original SNES or if you’re too young to have owned it. The SNES Classic Mini is great for both camps and there’s already talk of a possible N64 Classic Mini – which, for the record, we’re all for.

Price and where to buy

Following on from the NES Classic Mini, the SNES version is a little more expensive at £69/$79. That’s an increase of £20 but this time you get two controllers in the box and a game that’s never been released.

Just bear in mind that you need a AC adapter to power it as just a cable is provided. It’s £10.99 from Nintendo but you’ve probably got one lying around from an old phone or something.

It might cost more but this isn’t an issue for us; the device is just as much of a bargain as the original.

So much so, it seems, that there are stock issues yet again. If you haven’t already pre-ordered the SNES Classic Mini then it looks like you’re going to have to wait until after the 29 September release date to get one.

Luckily it appears that you won’t have to pay hundreds of pounds to get one via eBay because Nintendo promises that more stock is on the way. Initially the firm said it would only be produced this year but now says it will continue to be on sale in 2018.

You might just need to be patient then get your order in quick when more stock becomes available. Keep an eye on Amazon, GAME, Very and Nintendo’s official store. 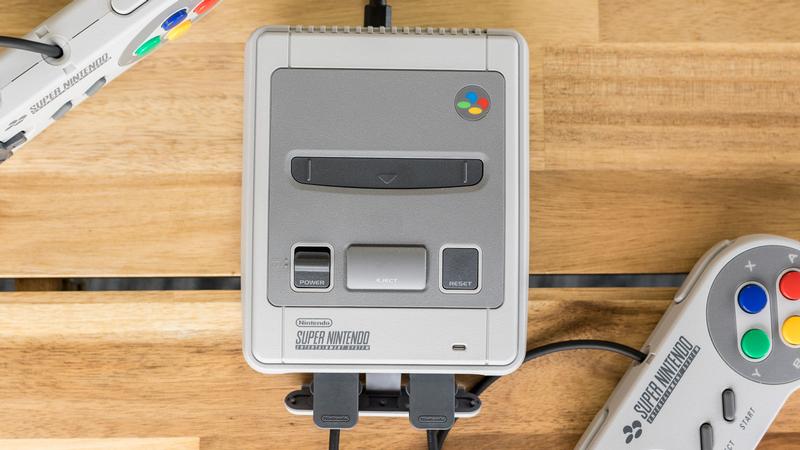 One again, as the name suggests, the idea here is a pint-sized miniature version of the SNES. That’s exactly what Nintendo has done and although it’s a tiny bit bigger than the NES version it definitely still fits in the palm.

The design is lovingly detailed and true to the original. Note that the designs are different in Europe and the US and yes, we get the better one in the UK.

You can use the power and reset buttons for those exact functions. All the games are pre-loaded so you can’t use the game slot or infamous reject button. 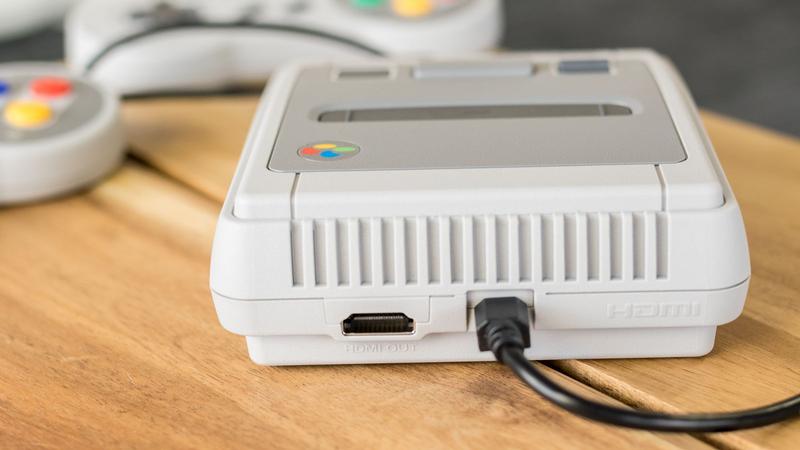 At the back is the Micro-USB port for power and HDMI for video out. It’s a small shame but inevitable requirement that the old-school ports at the front is actual a flap that reveals the more modern connection for the controllers.

The controllers look great and it’s nice that Nintendo has put longer cables on them. This was the biggest flaw of the NES Classic Mini, but although they are longer we wouldn’t mind a bit more cable.

It’s less of an issue but unless you have a tiny living room, you might struggle and end up sitting on the floor near the TV.

In terms of feel, the controllers do give the sensation of the original in the hand. However, the brand new buttons and in particular the D-pad might feel strange to some if you’re used to well-worn controllers.

One of the beauties of a console like this is just how simple it is compared to modern computing. You need only plug it into the power, your TV, attach the controllers and away you go. There’s no need for an internet connection, logging into and account and certainly no pesky software updates. 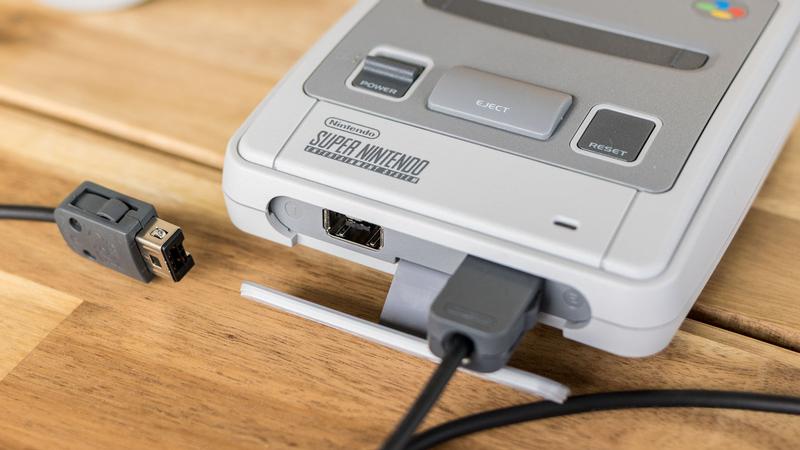 The only thing you need to decide on really is which display mode to use from the following options as per the NES Classic:

• Pixel Perfect – Gives you square pixels so you see the games as designed • 4:3 – Original SNES look but with a slight horizontal stretch • CRT – Adds a filter which looks like an old TV, scan lines and all

You will need to learn the interface a little, especially if you didn’t get the NES Classic, but it is fairly simple.

A carousel of all the games is easy enough to get the hang of; simply scroll through and select the game you want to play. A symbol in the corner indicates whether it’s a one or two player game and four dots indicate suspend points. You can also sort the games by things like developer, recently played and number of players.

A quick tap of the reset button on the console means you can save your progress at any point during a game. If you’re sharing the console, you can make use of up to four suspend points per game. 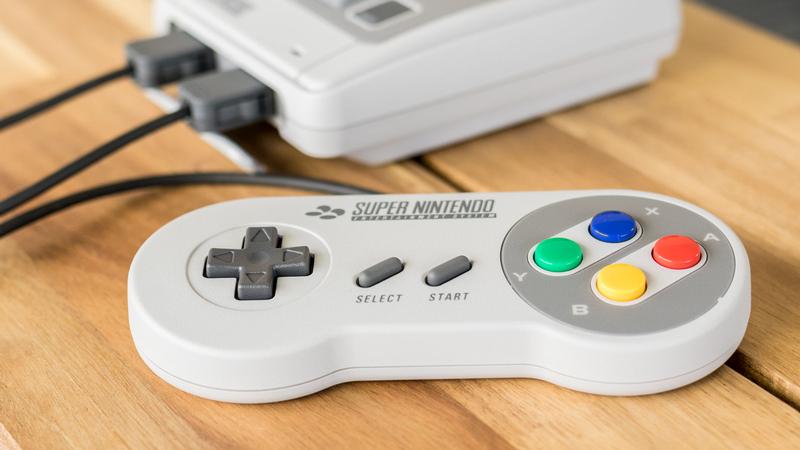 With the SNES Classic Mini comes a selection of handy new features which improve on the NES edition.

For starters, you can add frames to interface. Since the games aren’t in a widescreen aspect ratio, your modern TV or monitor will have black bars at the side but you can fill these if you like with various frames. Some of which will change colour for certain games.

That’s nice but a far more useful new feature is the ability to rewind gameplay if you mucked up or missed something important. Simply go to one of your saved points and hit the x button to bring up a sort of replay screen.

Here you can go forwards and backwards through the gameplay and pick the exact moment you want to start again. You can rewind up to five minutes of gaming.

It’s time to talk about games and although there aren’t as many compare to the NES Classic, the selection is arguably better. There are 21 games in total including a good number of acclaimed and widely adored titles. It particularly better on the two player front compared to the NES edition.

Take a look at the list below but highlights include Super Mario World, Super Mario Kart, The Legend of Zelda: A Link to the Past, Super Metroid, Street Fighter II Turbo, Yoshi’s Island, Donkey Kong Country and Kirby’s Dream Course. All the games are the original US release in 60Hz. 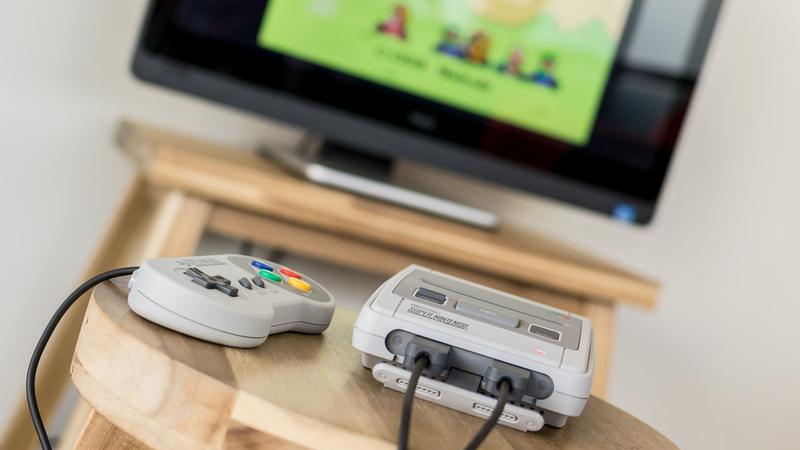 Whether or not there are games not on the list you’re gutted about is a personal thing and whether or not you buy one will likely hinge on the line-up. If you’re not keen look for the titles you want to play on Nintendo’s Virtual Console on newer systems.

Star Fox is a noteworthy game on the list but most gamers will be far more excited about the prospect of Star Fox 2 which was never released. The SNES Classic actually brings a brand new game, then. The only catch, and it’s not really a catch, is that you have to complete stage one of the original to unlock it.

As with the NES Classic, we’ve had no performance issues whatsoever. Games load super quick and play smoothly.