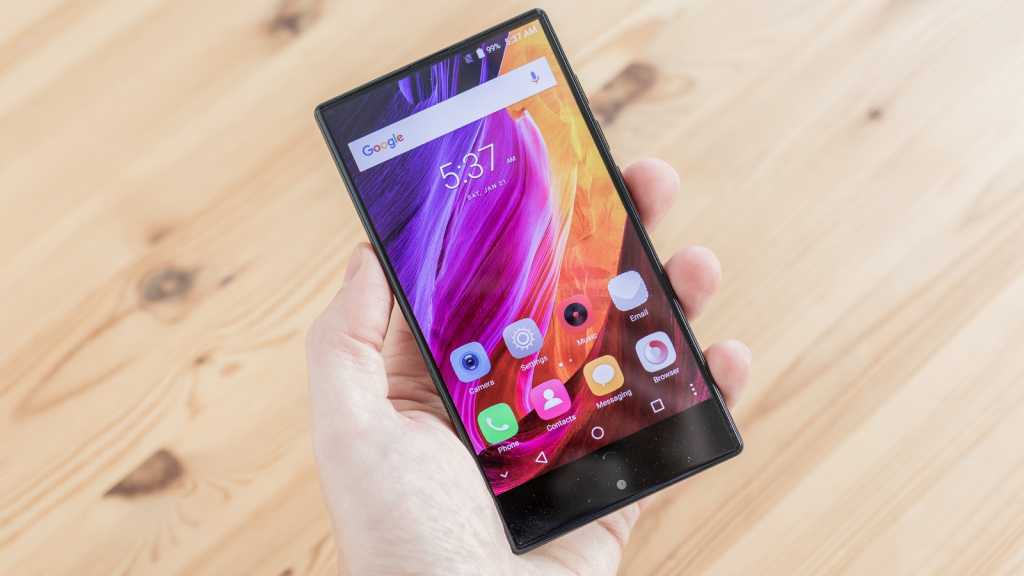 The Vkworld Mix Plus is a super-budget phone that majors on design but not a lot else. The camera and overall performance are best described as passable, but provided you’re an undemanding user it should be capable of whatever tasks you throw at it.

Vkworld isn’t a brand we’ve encountered before, but its Mix Plus is an interesting prospect. This is a budget phone that places aesthetics above all else, which makes it ideal for those who aren’t especially techy or deep-pocketed, but who want a nice-looking phone.

We’ve seen the Mix Plus advertised all over the place for its ridiculously low price and ‘bezel-less’ design. GearBest is listing it right now for a tiny £84.94 ($109.99/93.56€), which makes it significantly cheaper than nine of the 10 phones in our best budget chart.

Add in import duty – 20 percent of the value on the shipping paperwork – and you’re looking at a still-attractive £100 price tag. (Read our advice on buying Chinese tech.)

Vkworld Mix Plus Design and Build

The Mix Plus’ closest competitor is arguably the £129.99 Nokia 3, which uses the same processor but has half the storage and only two-thirds the RAM. The Vkworld has a larger screen than the Nokia 3 (5.5in vs 5in), yet it’s just a fraction of a centimetre wider.

This has been achieved by what is known in the industry as a ‘bezel-less’ screen, a trend started by Xiaomi’s Mi Mix last November. We have to point out that none of these phones are actually bezel-less, but by lopping off the top edge they can achieve a much higher screen-to-body ratio – here 90 percent. In this way you can squeeze a 5.5in screen into the body of a 5in phone, making it much easier to manage in a single hand.

It’s a trend that has no real reason for being other than the fact it looks really cool – and in the case of the Mix Plus, it makes your phone look like a top-end device even when it’s not. The screen is your primary way of interacting with a device, so the closer we can get to the all-screen phone the better.

The Vkworld Mix Plus suffers the same unfortunate side effects at the original Mix as a result, however. Most noticeably, the front camera now resides on the phone’s bottom bezel and requires you to turn it upside down to take a selfie.

The chin is larger than it seemingly needs to be, and despite there still being plenty of room here the Android-standard back, home and multitasking buttons are all onscreen types.

We are also surprised to find the Micro-USB charging port at the device’s top, and would be wary about accidentally scratching the glass when fumbling around for a charger in the dark. Also here is a 3.5mm headphone jack and a small slit for the speaker, which makes you wonder why so much space is required at the bottom.

The screen itself is not at all bad. In common with the Nokia 3 it’s an HD panel, with a resolution of 1280×720 pixels. With so many Quad-HD screens passing through our lab these days this sounds rather low, but text and images are sufficiently clear.

We were surprised by how bright the screen can go, and thanks to IPS display tech the Mix Plus exhibits realistic colours and excellent viewing angles.

Perhaps we should not be so surprised, of course, given that the design of this smartphone is its USP.

The good looks go beyond the display, and while the Nokia 3 has a polycarbonate shell the Vkworld has a premium metal frame and glass (Gorilla Glass) front and rear. The back has a mirror-shine finish, which the company claims pretty girls can use when applying their make-up. We would make a joke out of that, but they totally could.

Our only real complaint here is that the glass has a tendency to pick up fingerprints – add some make-up to those fingers and the Mix Plus will require regular cleaning.

The VKworld supports two SIMs, or one SIM and a microSD card, thanks to a hybrid slot. This sits up top on the phone’s left edge, while over on the right are three buttons for volume up, volume down and power. There’s no way to tell them apart, which is a bit of an oversight, but we assume this would become second-nature to most users reasonably quickly.

When you buy a budget phone at this sort of price in the UK it’s extremely unlikely to come with a fingerprint scanner. This is one of the benefits of buying from China, since the Mix Plus’ rear-mounted fingerprint scanner adds an easy way to securely unlock your device.

Arguably there’s just one thing detracting from the premium design here, and that’s the Vkworld logo and ‘Designed by vkworld – Made in China’ text slapped on the rear. But it’s not hideous, and it’ll probably be hidden by the palm of your hand anyway.

If you were impressed by the Vkworld’s design, you might want to look away while we talk about the hardware. Bar the Nokia 3 it’s been a long time since we’ve had a phone this slow pass through our lab. (Actually it’s a teeny bit faster than the Nokia 3.)

It’s powered by a quad-core MediaTek MTK6737 chip clocked at just 1.3GHz, which is 0.1GHz slower than the same chip when used in the Nokia 3. However, it has double the amount of storage and an extra gig of RAM over the Nokia 3, at 32GB and 3GB respectively. You can also add up to 32GB of storage via microSD, provided you aren’t already using the second SIM slot.

We’re not going to lie: this is a very slow phone, and sometimes you will need to wait a few seconds for apps such as the camera to launch.

But let’s put this in perspective: we test the very best phones here at Tech Advisor, phones that cost six-, seven- or even eight times the price of the Vkworld Mix Plus. We’re used to everything happening in an instant, but then we’re technology journalists. Hand the Mix Plus to an undemanding user and they would probably think it’s the same as any other in terms of performance.

While it’s probably not going to be any cop for gaming, nor for achieving multiple tasks at once, the Mix Plus is more than capable of providing you the necessary resources for browsing the web, enjoying social media, managing your emails, making phone calls and texts and even enjoying some video.

We’ve compared its performance in our benchmarks to the Nokia 3 in the chart below. Remember that the Nokia 3 is – relatively speaking – much more expensive than the Vkworld, and it also lacks its premium design. The differences here between the two are negligible, but differences there are.

Vkworld Mix Plus Cameras and Photography

Things don’t get a lot better on the photography front. The Mix Plus has an 8Mp primary camera and 5Mp rear camera, with both using software to boost to 13Mp and 8Mp respectively. We wouldn’t expect any more than this at this price, however, and the Nokia 3 is only slightly better with a pair of 8Mp cameras.

At first glance our test shot with out-of-box settings doesn’t look too bad, but when you cast your eye across the shot you’ll notice significant smoothing toward the edges. Viewed at actual size the lack of detail is obvious, though on the whole the colours are fairly realistic so it’s not horrific for a budget phone camera.

HDR is on or off, with no automatic setting, though it really didn’t make a noticeable difference.

In low light the camera struggles to light the scene and to differentiate blacks. Rather a lot of noise is also evident. A dual-LED flash is found on the rear, though we don’t use the flash in our low-light testing.

The Camera app is not as basic as we expected, with Auto, Beauty, Panorama and SLR modes covered, plus some control over settings, but there are no real-time filters or advanced features here.

The Vkworld, in common with the Nokia 3, comes with Android 7.0 Nougat out of the box. Unlike that phone, though, we’ve seen no guarantees that the operating system will get regular updates.

It’s a reasonably plain implementation of Nougat, with the most obvious difference the lack of an app tray – everything is placed on the home screen as it is in iOS.