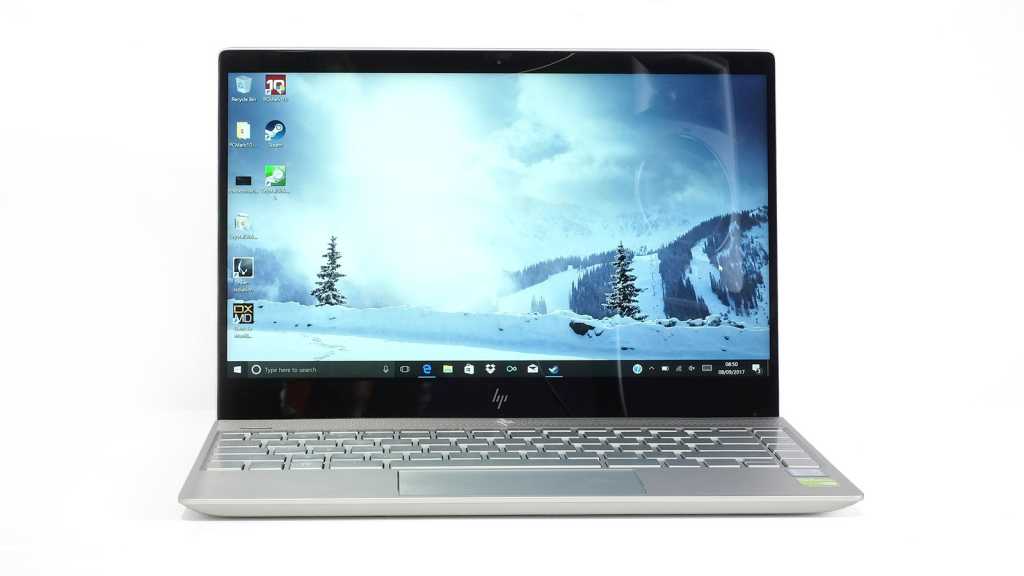 The HP Envy 13 is a great laptop for those who want something portable, good-looking, long-lasting and able to play games almost improbably well for such a slight machine. It’s more expensive than the Lenovo IdeaPad 720S or Acer Switch 3, but is far better than either for gaming thanks to its GeForce MX 150 graphics. The one niggle you need to consider is the trackpad. While it has a lovely glass surface, the action is more laboured than the best.

The HP Envy 13 has, for the past couple of years, been one of the best sub-£1000 laptops for people who want style and performance without a crazy price tag.

This 2017 model adds real gaming performance while reducing the footprint of the laptop. It’s portable, it has the power for real work and it can even play games.

The one weakness of the HP Envy 13 is that the trackpad isn’t as good as some rivals, so with that caveat, let’s talk prices.

Note: There is a new version of the Envy 13 for 2018 and you can read our full review here.

Starting at £899, the HP Envy 13 is not an affordable laptop. However, it is significantly more affordable than a MacBook or the Dell XPS 13. Dell’s alternative is £250 more for the same spec.

Gamers should seriously consider a £50 upgrade to the next model. It adds Nvidia GeForce MX150 dedicated graphics, and increases the SSD size to 360GB.

The version we’re reviewing is slightly higher-end still. It has a Core i7 CPU as well as dedicated graphics and the higher-capacity SSD. It costs £ 1099 direct from HP.

For our money the sweet spot is the middle-ranking £ 949 Core i5 version. You could get a bargain with the similar  Xiaomi Mi Air 13 with Intel Kaby Lake.

These laptops come with a one-year collect-and-return warranty. However, at the time of review you get an upgrade to a three-year warranty if you buy direct from HP. Some manufacturers charge hundreds of pounds for such a warranty.

The HP Envy 13 has been one of our regular sub-£1000 recommendations for a while now. Like Apple’s MacBook, it’s a line that gets regular updates under the same name.

This year HP has slimmed down the footprint by minimising the screen surround. It’s the latest trend in portable laptop design.

As a result, the HP Envy 13 seems, and is, a lot smaller than the older-generation MacBook Pro 13 we use as one of our standard day-to-day comparison laptops. Its footprint is petite, and both weight and thickness are pleasantly low.

The HP Envy 13 weighs 1.39kg and is 14mm thick. There are lighter, thinner laptops around, but to get one with anything approaching this spec you’ll have to pay significantly more.

This is an all-aluminium laptop aside from the glass covering its screen. It looks and feels great. There’s slightly more keyboard flex than in a MacBook, but build is otherwise solid.

HP’s latest style is much sharper-edged than the average. The keys are pure squares, there’s a tight patterned heat outlet of triangular cut-outs above the keyboard and the HP logo on the lid is aggressively sharp.

A slight difference in style isn’t the best reason to pick a laptop, but if you want something softer, check out the Lenovo IdeaPad 720S. It’s another top performer.

The HP Envy 13 has a cut-back array of connectors, but still far more than you’ll see in some new ultra-thin laptops. There are two USB 3.0s, two USB-Cs and a microSD slot, plus a headphone jack and standard cylindrical power jack.

An HDMI and a full-size SD are the only missing extras we’d make use of daily. The USB-C ports are ‘only’ specced to the Gen 1 standard, meaning bandwidth is 5Gbps rather than the 10Gbps of Gen 2 or the 40Gbps of Thunderbolt 3. However, you can still turn one of these sockets into an HDMI output with the right adapter.

The HP Envy 13 is the sort of laptop that gets you the essentials that make up a top-end laptop without some of the tech garnish. It’s why the price is hundreds of pounds lower than some competitors.

You see this on the keyboard plate too. There’s no fingerprint scanner, but the HP Envy does have a glass trackpad rather than a plastic one. This lets you move your finger back and forth as quick as you like over it without the ‘squeaky’ resistance you’ll feel with a plastic pad.

The surface is great, but the click action is not the best around. There’s about a millimetre of pre-click depression. Press down lightly and the pad depresses a little with no function attached. You then have to press further to get the pad to click.

Previous Envy models have had this style of trackpad, but it makes clicks feel more laboured than they need to be. The click itself is quiet, though.

The HP Envy 13 keyboard makes full use of the available space with full-size keys and a proper key action rather than the ultra-shallow style some style laptops have started to adopt. We found the layout takes a little while to get used to, mostly thanks to the row of function keys at the far right of the keyboard. But after that it’s very easy to type on.

As already noted, there’s a little flex if you press down firmly in the middle of the keyboard, but it’s slight and doesn’t make typing feel spongy.

The keyboard also has a backlight. It’s a simple on/off light, with no dimming, but will make typing in darkness much easier.

There are two great elements to the HP Envy 13 screen. First, it has an ultra-thin border, making it look like a cutting-edge display. This is also a touchscreen, a feature missing from many alternatives including the MacBook, the Lenovo IdeaPad 720S and Acer Swift 3.

The hinge doesn’t let the display fold out flat, though, stopping at around 135 degrees.

Display quality is what we’d call “normal” for a £1000 laptop. It has a 1080p IPS panel with a glass top surface and good but not class-leading performance in all areas.

The HP Envy 13 covers 78.2 percent of sRGB, for example. This is enough to stop the laptop seemingly obviously undersaturated, but we ideally like to see this figure get closer to 85-90 percent. It means the deepest shades aren’t properly represented, reducing the perceived richness of the screen just a little.

Contrast is solid at 863:1. Like colour, it’s not an outright impressive result but is enough to make the HP Envy 13 satisfying for movies and games.

Brightness tells the same story. The HP Envy 13 screen maxes-out at 294cd/m², which is just about enough to compete with a bright day, but only just.

Screen performance is very similar to that of arch rival the Lenovo IdeaPad 720S. It offers a tiny bit more brightness, 305cd/m, and better contrast, 1023:1, but very similar colour depth.

There is a slight drop off in brightness in the last few millimetres of the screen. For the first day or so we found it slightly distracting but the effect is minor and we quickly stopped noticing it.

The core specs of the HP Envy 13 are, in most respects, similar to other premium portable laptops. You have a choice of a 7th generation Intel Core i5 or I7 CPU. HP sent us the Core i7-7500U version, with 8GB RAM and a 360GB SSD.

This 360GB drive is larger than that of almost all the competition. Other keenly priced models like the Lenovo IdeaPad 720S have 256GB drives as standard, and even the £1200 config of the Dell XPS 13 still has a 256GB SSD.

An extra 100GB of storage is a huge benefit, particularly as an upgrade to a 512GB SSD never comes cheap.

General performance is excellent for all sorts of light tasks. The HP Envy 13 is responsive, quick to wake from sleep and fast to load apps. If you’re upgrading from a laptop with a hard drive rather than an SSD, you’re in for a treat.

Unless you’re planning on, for example, serious video editing, there’s nothing to worry about here.

The HP Envy 13 also has a special extra, Nvidia GeForce MX150 discrete graphics. This is the first laptop we’ve reviewed with this chipset, and it gets you a big upgrade from the GeForce 940MX graphics used in some alternatives. And it’s much better than integrated Intel graphics.

This laptop can handle some triple-A games surprisingly well. Alien Isolation at 720p, low visuals, runs at an average 76.6fps. Played as intended, at 1080p with the effects turned back on, the HP Envy still manages a totally playable 36.1fps average.

Turning up the heat a little, we tried Deus Ex: Human Revolution, which is a more taxing game. At 720p resolution, Low settings, it runs at an average 36.8fps. Again: very playable.

A game like this really needs more power than the MX 150 provides to shine, though. At 1080p, Ultra settings it slows down to a pitiful 9.5fps. Keeping the resolution at 1080p and dropping the quality down to Low, the game runs at an average 22fps.

While HP Envy 13 isn’t a portable PS4 Pro, it gets closer than other sub-£1300 style laptops we’ve seen to date. As long as you’re willing to play around with graphics settings to reach playable speeds, you can play most games on this laptop. Some are best run at 720p/900p rather than 1080p, though.

The GeForce MX 150 is a great little graphics chipset.

When pushing the HP Envy 13 with productivity tests, we did notice that fan speed tends to yo-yo up and down a little on occasion. This is likely down to it trying to keep the fan rpm as low as possible while keeping heat at bay, but a fan that changes speed/pitch a lot can be more distracting than a slightly louder, more consistent one.

However, it’s never particularly loud, and is virtually silent during light work. We also didn’t hear too much fan speed leaping during gaming tests, and the fan sound is inoffensive when maxed-out.

This is a very flexible laptop. And when not gaming it can easily last through a day’s work.

This is almost dead-on HP’s own claim of 12 hours 30 minutes. We love it when a manufacturer makes a claim and delivers.

Once again the HP Envy 13 roughly matches its arch-rival the Lenovo IdeaPad 720S, which lasted 12 hours 5 minutes in the same test. A neat extra, the HP Envy 13 is also quick to charge, going from 0 to 90 in 90 minutes.

This is an excellent laptop for work trips, travellers and roving workers. Its speakers are reasonable too. They sit on the HP Env y 13’s underside, for a soundstage wider than the laptop itself.

Compared to the best MacBook speakers these are a little unrefined and boxy-sounding, but they do at least have the hint of lower-frequency output needed to avoid that classic “thin and nasty” laptop speaker sound.

These are Bang & Olufsen-branded speakers, and there’s a little dashboard that lets you alter the sound profile to suit movies, music and voice recordings. It’s nowhere near as dynamic as Dolby Atmos laptop sound processing, but is a welcome extra.