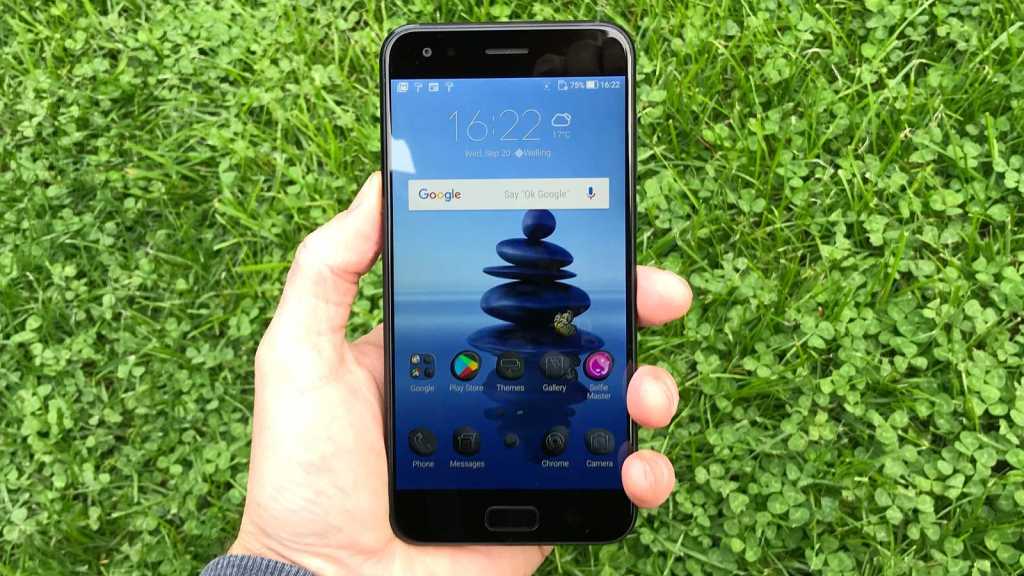 The ZenFone 4 is a well-built phone with some forward-looking specs. It also has good cameras, with the option of standard or wide-angle at the rear. However, it’s the same price as the OnePlus 5 which has considerably better performance. And if you prefer the wide-angle camera, the Moto X4 has an identical setup (albeit with a camera bump rather than flush-mounted) and is waterproof to boot. Ok, so it has half the internal storage, but for £100 less, it’s much easier to recommend than the ZenFone 4.

Asus wants to get back into the smartphone game and has already launched a high-end Project Tango phone – the ZenFone AR back in the Summer. Now it’s aiming for mid-range appeal with the new ZenFone 4.

Standing out in a crowded market is tough, so what does the ZenFone offer? Well, dual cameras, a big battery and some of the latest specs such as Bluetooth 5. But in other respects it’s a little more pedestrian: no edge-to-edge screen, a mid-range processor and no waterproofing.

It costs £449.99 which is at the top end of mid-range. It puts it in competition with the OnePlus 5 and several other cheaper phones, including the Moto X4 and Xiaomi’s Mi Note 3.

There’s more than a hint of iPhone 7 Plus in the ZenFone 4’s design: it’s the same size, has a 5.5in full HD screen, a fingerprint scanner on the front and two cameras around the back. It’s also very like the OnePlus 5, with its lozenge-shaped home button.

It has a glass back (like the iPhone 8 Plus) and Asus’ trademark diamond cut finish that makes the light reflect differently as you tilt the phone in your hand.

It’s well built but quite slippery in the hand, so the fact that a transparent rubbery case is included in the box is handy.

Unlike some other phone makers, Asus has kept the 3.5mm headphone jack but puts a modern USB-C port alongside it on the bottom edge.

Power and volume buttons sit on the right and there’s a SIM tray on the left. It’s a dual-SIM phone but if you want to expand the internal storage, you’ll have to use the second tray for a microSD card.

What’s missing is waterproofing and wireless charging, features that are becoming standard on many phones, even at mid-range prices. However, the OnePlus 5 lacks these. But the Moto X4 has an IP68 rating.

Going down a similar road to OnePlus, Asus aims to offer decent specs inside a phone that’s a lot cheaper than the Samsung Galaxy and iPhones of this world.

We’ve become spoiled with mid-range phones packing the same processors as flagships, but you shouldn’t be surprised to learn there’s a Snapdragon 630 inside the ZenFone 4 rather than the 800-series chips in flagship models. It’s a brand new chip and you get 4GB of RAM, too.

There’s certainly nothing sluggish about the phone’s responsiveness in general use, even if the benchmarks suggest it’s a lot slower than rivals. It managed 859 (single thread) and 4215 (multithread) in Geekbench 4. For reference the OnePlus 5, which is equipped with the Snapdragon 835 and 6GB of RAM, scored 1967 and 6709 respectively.

Similarly, in GFXbench, the ZenFone could muster only 14fps in Manhattan and 5.3fps in the Car Chase test. The OnePlus 5 storms ahead with 56fps and 25fps. The browser benchmark JetStream returned a score of 26 for the ZenFone, while the OnePlus scored 73.

The problem with benchmark results is that although they highlight differences between hardware, they can’t tell you how a phone feels in the real world. Games run absolutely fine on the ZenFone 4. Pokémon Go and Asphalt 8 zip along with no jerkiness or hesitation. Basically, you wouldn’t notice the difference playing games on a OnePlus 5 or this Asus.

It also has decent connectivity. For one thing, there’s Bluetooth 5 which offers much better speeds and range than previous versions.

Plus, it has the Qualcomm X12 LTE modem which means blistering Cat 12 speeds of up to 600Mb/s if you’re near a cell tower that supports it and have a suitable mobile provider and tariff. The SIM tray takes two nano SIMs and it works on a dual-standby basis. Both slots support 4G, but not simultaneously.

And if you want more storage than the provided 64GB, which is pretty generous at this price, you’ll have to forego the second SIM and use the slot for a microSD card.

As with the OnePlus 5 you get Hi Res audio support in the ZenFone 4, and AptX Bluetooth audio. The fingerprint sensor works quickly, but we did have to re-register a fingerprint after the phone stopped recognising it. Since then, it’s been fine.

Battery life isn’t bad, but it’s not as good as the ZenFone 4 Max (understandable given the difference in capacity). Expect to get a day out of it with normal use, but no more.

A ‘fast charger’ is included, but it isn’t as rapid as some, such as Huawei’s Mate 10 Pro.

Cameras are really the focus of this phone – no pun intended. You might expect the second rear camera to have a telephoto lens, but instead there’s a wide-angle lens that offers a 120-degree field of view and a 12mm-equivalent focal length.

This means you can get much more in the frame without the wild distortion you get from an action camera lens (and which LG uses on the G5 and G6). It’s particularly handy indoors, or anywhere you can’t move further back.

The only snag is that it’s an 8Mp sensor, which means less resolution and detail than you’ll get from the main 12Mp camera. The default setting is actually 6Mp (a 16:9 aspect ratio) but you can get the full 8Mp by changing this to 4:3 in the settings. When

That main camera has a Sony sensor with dual pixels for super-fast focusing. Asus reckons it can focus in 0.03 seconds, and it’s certainly quick in use. There’s also the expected two-tone LED flash for more natural skin tones at night.

Here’s a couple of test shots to show you how the two cameras compare.

At the front you get a decent 8Mp selfie camera and Asus’ SelfieMaster app for beautifying yourself in strange Asian ways. Although it’s a separate app, it launches when you flip to the front camera and the settings are preserved so you don’t have to keep changing things once you’ve found a combination you like.

The problem is that stabilisation isn’t all that good for video – only EIS is used in 4K. You’ll get the smoothest and most cinematic footage if you use the wide-angle camera, but this limits you to 1080p at 30fps.

Asus has already said that it will update the ZenFone 4 to Android Oreo, but out of the box it ships with 7.1.1 Nougat and Asus’ ZenUI.

ZenUI is now on version 4 and has been overhauled to make it simpler, easier to use and faster. There are also far fewer pre-installed Asus apps and third-party apps, which is nice to see.

We’ve mentioned the SelfieMaster already, but you’ll also find a memory booster utility, Game Genie – which offers a macro tool and a screen lock to prevent accidentally switching apps – an AI-based Gallery app which lets you sort photos by person and Twin Apps.

The latter is special versions of Facebook, Messenger and Instagram that allow you to use two accounts without signing out when you want to switch between, say, work and personal accounts. Huawei offers a similar thing on its phones.

There’s the expected theme manager which includes a few animated backgrounds for the ZenFone 4. ‘Living’ themes can change the photo of a scene throughout the day, perhaps showing a sunrise in the morning and a night time view late in the day.