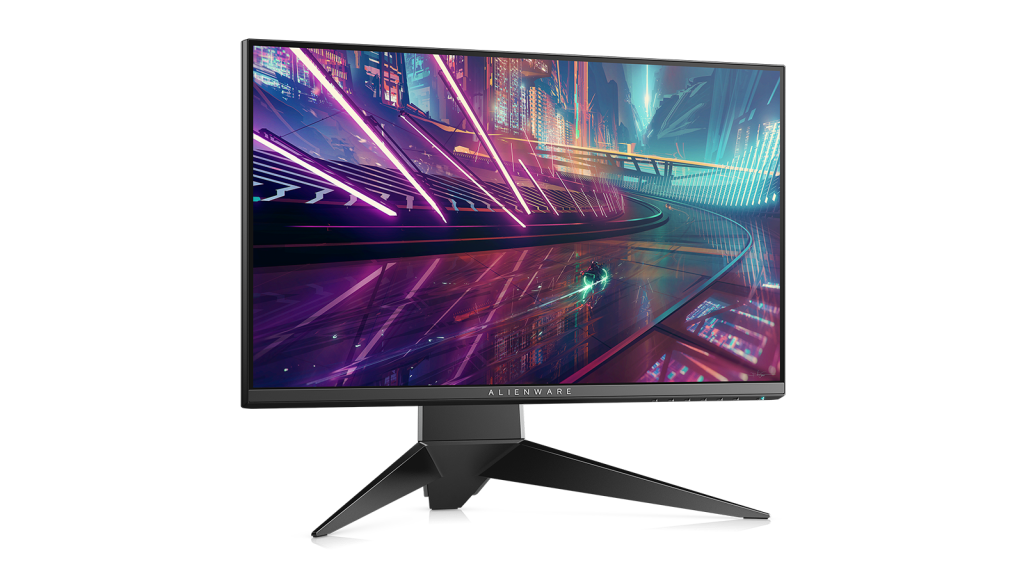 A 240Hz displays go they few are more exotic looking than this one, or can deliver that refresh level with a 1ms response timing. The caveat of this one is that it’s almost exclusively for those people who have invested in AMD GPUs, or don’t care about adaptive sync.

Hard-core gamers will be drawn to this 25in Alienware’s 240Hz capability, especially if they use an AMD GPU and not Nvidia graphics, since it supports AMD’s FreeSync tech for fast frame rates with no tearing.

Although it’s not at all cheap (but then no Alienware kit is) the AW2518HF is a whopping £200 less than its AW2518H brother that offers Nvidia G-Sync technology.

That means the G-Sync model is nearly 60 percent more expensive, or to put it another way the AW2518H costs the same as an AW2518HF and a Sapphire AMD Radeon RX 570 4GB Pulse Graphics Card combined.

Therefore the AW2518HF will attract those gamers who haven’t already invested in an Nvidia graphics card and would like a very high refresh screen to exploit the high frame rates their rig can generate.

Everything about this hardware is a design statement, including the very large box. After popping four retaining latches the outer shell of the case slides off to reveal a 24.5in 1080p panel and one of the most dramatic support stands we’ve yet seen on a monitor.

The three contact points of the support are widely spaced, and provide sufficient stability to enable the screen enough vertical travel to be fully rotated into portrait mode.

Of the 7.14 kg total combined weight 3.52 kg is the support stand, Underscoring just how well constructed it is as well as the enormous scale of the thing.

The support has a pathway at the bottom designed to organise the cables before they insert into the screen. After they’ve been attached a thin plastic panel can be attached to obscure the ports for no obvious reason. This panel is flimsy, difficult to fit and designed to be broken or retired from use by most owners with a relatively short space of time.

In comparison the screen component seems mildly unassuming, sporting a four port USB 3.0 hub, dual HDMI 2.0 ports and a single DisplayPort 1.2 input. Curiously, this is better than the more expensive AW2518H that only offers a single port of HDMI 1.4.

We should mention that there is also pass-through audio for speakers and headphones, as real gamers won’t need any integrated speakers.

Other than the lack of G-Sync support another change Dell made with this model is that it doesn’t have the AlienFX lighting that is on the AW2518H had on the rear. Being on the back of the screen the player never saw these anyway, making their omission no great loss. Oddly, the Alien head logo that was part of that feature is still included, even if it now doesn’t light up.

A more enticing selling point of this screen is the native 240Hz refresh. A feature you’d assume would work with whatever GPU you have. However, that’s entirely dependent on the card you’ve got, as we could only manage 144Hz with a GTX 1060 specification card.

Therefore it is worth doing some research on your existing GPU and what sync speeds it can generate before investing in this, or any high refresh design.
What you certainly can’t do is use a variable sync speed as defined by your video card unless you use an AMD Free-sync compliant card.

The TN (Twisted Nematic ) technology used here isn’t known for colour representation, and that was partly borne out by our calibration testing. It managed 96 percent of the sRGB Gamut and 95 percent of AdobeRGB range. These are respectable numbers for TN, but nothing special.

Where this screen did much better was in respect of the brightness and contrast tests, where it exceeded the quoted brightness levels of 400 cd/m² and produced excellent contrast levels across a range of brightness settings. Black levels on the AW2518HF are exceptional for a TN panel and really help when playing dark FPS titles.

Response performance, as you should reasonably expect from a native 240Hz screen is great, although exactly how smooth everything appears is dependent on the use of a Free-Sync compliant GPU, or one that can generate 240 frames per second consistently (if you use 240Hz mode).
As the resolution is only 1080, that would be most modern graphics cards that cost more than £150.

The weaknesses of this design are two-fold. The first is that the viewing angles of TN technology aren’t like IPS or VA, and this panel suffers noticeable colour shifts when you’re relatively few degrees from perpendicular. Not a problem for the seated gamer, but his friends sat alongside him will think that the colour calibration is wildly skewed.

The other issue is that with FreeSync 2 monitors starting to appear, and plenty of 144Hz 2560×1440 screens at a similar price point, it might not be long before the gloss of 240Hz and Alienware’s unique styling starts to rub off.

The AW2518HF is a high-quality product more practically priced than its G-Sync capable stablemate, but in a competitive market that might not be enough.