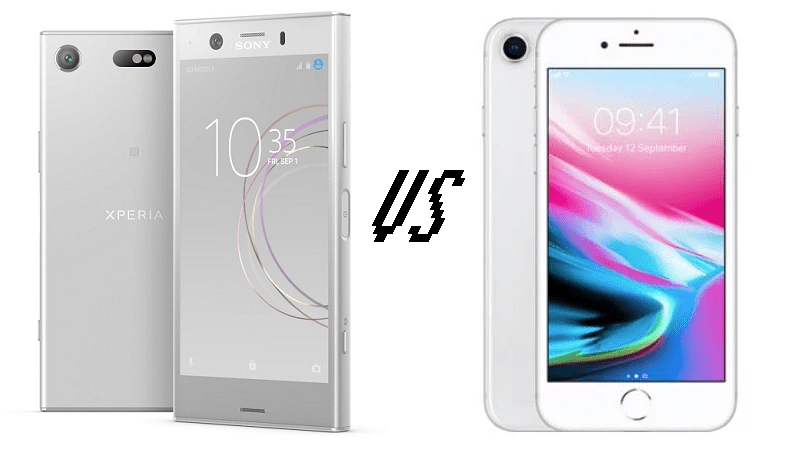 If you haven’t decided based on price or operating system, this is quite a tricky choice. While the Xperia XZ1 offers HDR and 960fps slo-mo video, the iPhone 8 has wireless charging and the option of dual camera. It’s too close to call really, but audiophiles will almost certainly want to choose the XZ1, though.

New phones from Sony and Apple are on sale today, but which one should you buy? Here we take a look at the Xperia XZ1 vs iPhone 8 including price, design and specs.

We haven’t seen the iPhone 8 models in the flesh yet so we’re comparing these phones on paper.

Historically, Sony Xperia phones have been up there with the most expensive phone around. However, as others have pulled away, the firm has wisely kept the price of the Xperia XZ1 down to an extent.

At £599, you’ll save a cool £100 compared to the cheapest iPhone 8. You can buy the XZ1 SIM-free from Carphone Warehouse or on a contract from all major UK operators such as Vodafone (from £40 per month).

Depending on which iPhone 8 model you want, all of which are now available, you could be spending as much as £949 with  Apple, though of course you’re most likely to buy it on contract. Take a look at all the prices below.

After the break we’ll compare the phones in design and specs to help you decide which one to buy.

With high-end specs on all these phones, design is a big area of differentiation. And you’ll likely know which one appeals to you straight away.

The iPhone 8 sticks with a similar design to its predecessor with the main difference being a return to a glass rear cover to enable wireless charging – the first iPhone to offer the feature.

It’s still a stylish smartphone with its clean lines and rounded corners. Bezels are still pretty big, though, so you have the home button below the screen. It’s the iPhone X with the bezel-free design.

The Xperia XZ1 also has chunky bezels but for the inclusion of stereo speakers rather than phyical buttons. It also has a headphone jack which Apple no longer offers.

Sony cleverly places the fingerprint scanner in the power button on the side of the phone.That’s despite the device being almost the same thickness at 7.4- vs 7.3mm.

Pinoneering the tech, Sony continues to offer waterproofing and those flaps to cover ports are long gone. The Xperia XZ1 has a rating of IP68 which is the highest around.

Apple’s iPhone 8 is waterproof but has a slightly lower rating of IP67 meaning you can dunk it in up to one meter of water rather than go over 1.5 meters.

Sony has stuck with a 5.2in for the XZ1 so this sits neatly inbetween the iPhone 8 models which remain at 4.7- and 5.5in – the larger being the Plus option.

Although Sony has some phones with a 4K resolution, the XZ1 has a more sensible Full HD resolution but it has the HDR support of its bigger brother, the XZ Premium. However, that’s only of use with certain content on Amazon Prime Video and Netflix.

To get this on an iPhone, you’ll have to get the X as the 8 models still have the same IPS screen as before. They do have TrueTone support though, which means better colour and automatic adjustments based on ambient lighting conditions.

You’ll have to get the iPhone 8 Plus to get a Full HD resolution but the larger screen size means the pixel density is 401ppi compared to the XZ1’s 424ppi. Things drop to 326ppi on the 4.7in iPhone 8.

Don’t worry about this stuff too much as other areas are more important in this comparison. There are a couple of things noteworthy, though.

The iPhone 8 models have a new A11 Bionic processor which is six-core and also has a new three-core GPU. The firm doesn’t say outright but the iPhone 8 is thought to have 2GB of RAM while the iPhone 8 Plus has 3GB.

Sony has opted for the reliable Qualcomm Snapdragon 835 octa-core processor and the phone has 64GB of storage and 4GB of RAM as standard. There might not be a choice like 256GB as with the iPhone 8 but there’s a microSD card slot so you can add more storage.

There’s no obvious choice when it comes to the cameras on offer here.

While Sony has a higher resolution camera at 19Mp, it has an f/2.0 aperture against Apple’s f/1.8. That said, we like the way Sony continues to put a physical camera/shutter button on the phone.

Apple’s main camera is 12Mp and also has optical image stabilisation (OIS) which the XZ1 doesn’t have. Apple’s cameras are well-known for taking great photos and video despite the lower resolution.

If you opt for the iPhone 8 Plus you’ll get dual rear cameras giving you an additional telephoto lens for x2 optical zoom.

While the iPhone can do slo-mo video at 240fps, Sony is the only to manage a whopping 960fps. You can however, only shoot at that frame rate for a single second.

Take a look at our best phone camera test which includes the Xperia XZ Premium and iPhone 7 to get an idea of what to expect.

It’s fairly obvious but software is a huge difference here as you’re choosing between iOS and Android.

It’s highly likely you’ve already pledged your allegiance to one by now but if you haven’t then it’s worth trying both to see which you prefer. If you have then it’s easier to remain loyal and not have to re-purchase all the apps you’ve spent money on.

The iPhone 8 comes pre-loaded with iOS 11 and the Xperia XZ1 is one of the first phones to ship with Android 8.0 Oreo.

If you’re trying to decide between operating systems, then read our iOS 11 vs Android 8.0 Oreo comparison review.