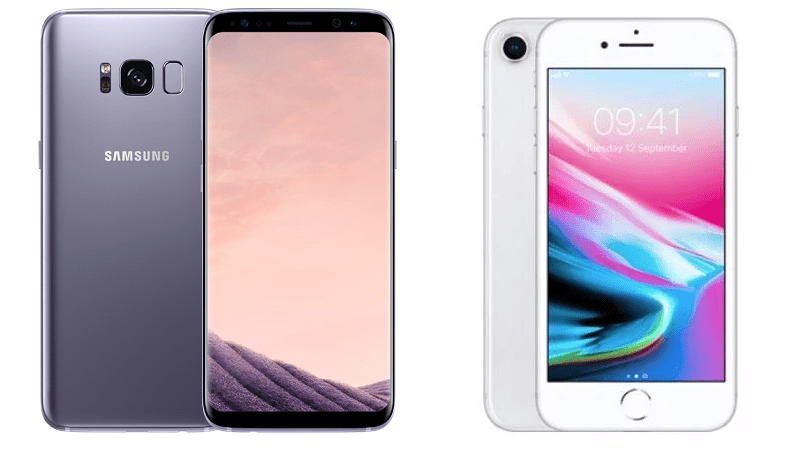 There’s no obvious choice between these four phones as it largely depends whether you want iOS or Android – and how much money you want to spend. Software aside, the Galaxy S8 is the superior phone here thanks it’s combination of sleek design, impressive Infinity Display and excellent cameras – all for a lot less money.

Apple’s new set of iPhones are now on sale but how do they compare with two of the best phones we’ve ever seen? Here we take a look at the Galaxy S8 vs iPhone 8 including the larger plus models.

We haven’t seen the iPhone 8 models in the flesh yet so bear that in mind. We’re comparing these phone on paper.

Starting with the price, you’ll need a healthy bank account balance to afford one of these phones outright.

Comparing the RRPs (see the table below) shows that the Galaxy S8 is marginally cheaper than the equivalent iPhone. However, since the Galaxy S8 has been around for a while you can now get it cheaper.

For example, Amazon is selling the phone for £529 so that’s a decent saving compared to the iPhone 8 which won’t drop in price any time soon. The new iPhone 8 models are available from Apple, or on contract from Carphone Warehouse. You can take a look at our round-up of iPhone 8 contract deals here.

This is an important category here, especially as core specs are similar and you can expect top performance from any of these phones.

Apple has returned to using a glass rear cover for the iPhone 8 which makes it more similar to the Galaxy S8. The main reason is so that the device supports wireless charging, something Samsung has offered since the S6.

The iPhone 8 is still an attractive smartphone but the large bezels look very dated compared to the Galaxy S8 with its impressive Infinity Screen.

It does mean the Touch ID fingerprint scanner is on the front, where Samsung has moved it awkwardly next to the camera on the back. The phones do have a pressure sensitive home button built into the screen, though.

Once again, the iPhone 8 models are waterproof with a rating of IP67 – meaning up to one meter of water. The Galaxy S8 has a higher rating of IP68 so you can go over 1.5 meters.

As alluded to, it’s the Galaxy S8’s stunning Infinity Display that makes it stand out in the smartphone market. It’s got curved edges, eye popping SuperAMOLED tech and a Quad HD+ resolution (1440x2960).

Fitting a 5.8in screen into a phone only a little bit bigger than the iPhone is impressive. The Galaxy S8+ has a 6.2in screen if you want something even bigger.

It’s especially true here as the iPhone 8 sticks to the same 4.7in Retina display using a (750×1334) and LCD technology. The iPhone 8 Plus is a bit more impressive at 5.5in with a Full HD resolution.

Apple has upgraded the screen compared to the iPhone 7 so it supports TrueTone for a wider colour gamut and automatic adjustments based on ambient lighting conditions.

It’s really the iPhone X that can compete with the Galaxy S8 in this area with it’s all-new Super Retina Display which is bezel-free.

This isn’t an area which should have a big impact on your buying decision but we’ll run through it briefly.

Apple has upgraded the internals for the iPhone 8 so both have its new A11 Bionic processor which is six-core and also has a new three-core GPU. The firm does state it but the iPhone 8 is supposed to have 2GB of RAM while the iPhone 8 Plus has 3GB.

Inside the Galaxy S8 phones is an octa-core Exynos 8895 (in Europe anyway) and 4GB of RAM. There’s only 64GB of storage where Apple also offers 256GB, but Samsung provides expandable storage thanks to a microSD card slot so you can easily add more.

The cameras are quite similar here as both the Galaxy S8 and S8+ have a Dual Pixel 12Mp rear camera with OIS and an f/1.7 aperture.

Apple has a 12Mp camera with OIS on the iPhone 8 albeit with a slightly less impressive f/1.8 aperture. However, if you get the larger iPhone 8 Plus you’ll get dual rear cameras giving you an additional telephoto lens for x2 optical zoom.

For dual cameras on a Samsung, you’ll need to get the Galaxy Note 8.

At the front, things are similar but the Galaxy S8 comes out slightly on top thanks to its 8Mp camera with the same f/1.7 aperture as the main camera. It can also record video at 1440p.

As with any comparison of an iPhone vs a non-Apple rival, software is a huge difference. Do you want iOS or Android? And that’s not a simple question to answer, since it’s a very personal thing.

At this stage in the game it’s likely that you’re committed to one side of the fence and it’s easier to stay there. Not only are you used to the way the operating system works, you’ve likely also spend a fair bit of money on apps which you’ll need to buy again should you switch.