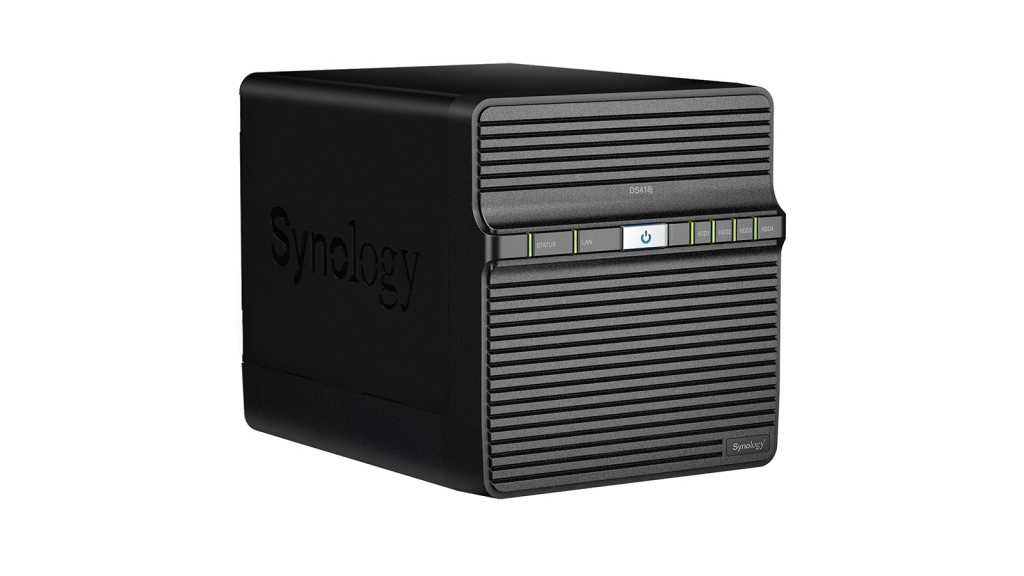 Synology wants to repeat the success of the DS416j without treading on the toes of other products in the range. For almost the same price the DS418j offers more CPU performance, RAM, more USB 3.0 ports, larger drives and volume sizes.

Synology’s NAS boxes often get an upgraded on a two-year cycle. And, while in that time the outside changed very little, the inside of four-bay ‘j Series’ NAS has been entirely overhauled.

It’s a great NAS for those that want to do more than just file serving and make use of the 80+ applications that the DS418j supports. And those that like to hang external storage off their NAS equipment should also embrace this option for the dual USB 3.0 ports.

As much as we like this design, and it is lovely, some aspects hint at future problems in this series (but not this model).

Shortly Synology might have to accept that there is already sufficient power in this box to drive four SATA drives and serve ten users, especially over Gigabit Ethernet. Therefore, installing greater CPU power and more RAM would be largely pointless for the majority of customers.

Right now, the DS418j represents a good choice for anyone who likes to keep lots of media on tap or runs a small business that needs centralised storage and backup for a handful of users.

Note that the DS420j has arrived (as of January 2020) to replace the 418j but doesn’t change things much at all. It namely adds a quad-core processor so this older model might be the better buy.

Regarding the cost, it’s reasonable, especially when you consider that the storage you put inside will likely cost much more than the DS418j.

However, there’s such high initial demand that even the cheapest online suppliers in the UK are charging over £300, including Amazon at £313. Expect prices to fall shortly.

You can still get the very serviceable DS416j it replaces for around £260, if having the latest equipment isn’t critical to you.

The test platform Seagate IronWolf 4TB drives we used to test cost around £120 each, making a full drive compliment come in at close to £500.

For those who’d prefer the IronWolf Pro 10TB drives the storage outlay might well exceed £1,600, at which point the £300 for this unit becomes the minor cost component.

Synology’s range of NAS drives covers everything from single-drive home machines up to massive rack-mounted monsters that can handle up to 180 drives. 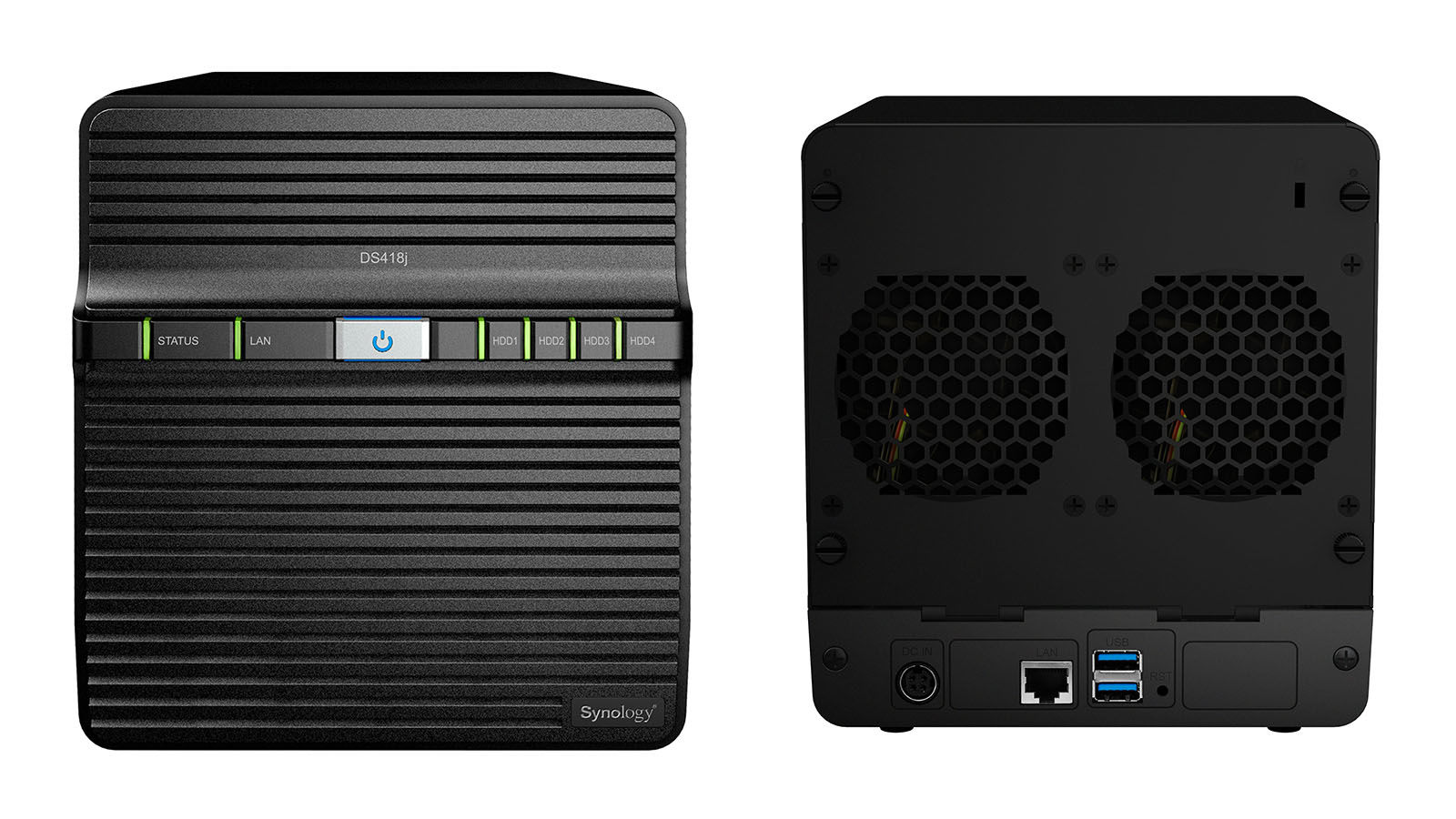 The DS418j’s target audience is the typical home and small business user. One that’s accrued the amounts of data that warrant a proper facility for it to be made more secure.

The DiskStation DS418j is the very first of the x18 series and a direct replacement for the DS416j that was released back in January 2016.

From the outside very little has changed. These models are still sporting the same black minimalist styling that the DS411 had in 2010. Synology doesn’t see anything wrong with this design and therefore, appears in no rush to revamp it.

Given that the majority of NAS boxes live their lives hidden in a cupboard, perhaps this explains why.

The previous DS416j used the Marvell Armada 388 88F6828 CPU, a dual core 1.3GHz ARM processor with 512MB of DDR3 memory to lubricate file serving operations. It could accept four 8TB 3.5in SATA drives delivering a maximum raw capacity of 32TB, although the maximum single volume size was limited to 16TB.

On the face of it, the DS418j is more of the same but tweaked to the next rung of the ladder. 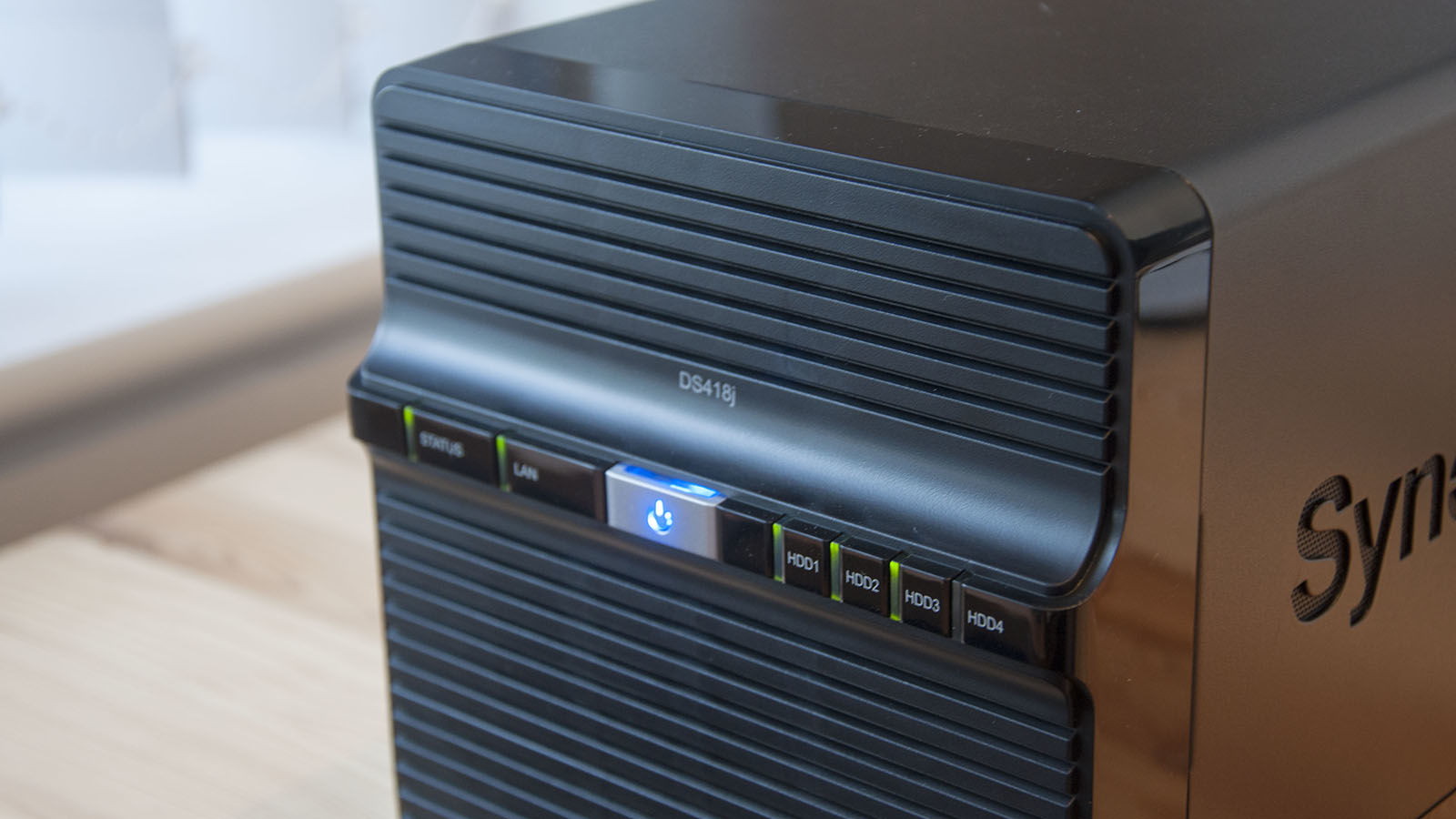 At the heart of this design is a new 64-bit dual-core 1.4GHz CPU, the Realtek RTD1293.  That’s a major brand departure for Synology. In previous models, it has almost exclusively used Marvell ARM processors, with a few limited exceptions using Annapurna Labs and STM hardware.

In this configuration, the RTD1293 is wired to 1GB of DDR4 RAM, and it supports a whopping 40TB (4 x 10TB) of RAW storage. That entire capacity can now be allocated to a single volume with changes to the file system options.

The processor also has a hardware decryption engine, accelerating the reading of attached storage in encrypted formats. What it doesn’t offer is any form of hardware transcoding, unfortunately. As Synology has restricted his capability to ‘Play’ and some ‘+’ models so far, and the DS418j doesn’t redraw those boundaries.

A single Ethernet port effectively limits the file serving performance to that amount of bandwidth, and the DSM operating system has a predefined cap of 10 simultaneous users. That won’t normally be an issue for home users, and these limitations look specifically designed to convince business users to invest in the DS1517+ or DS916+ models instead. 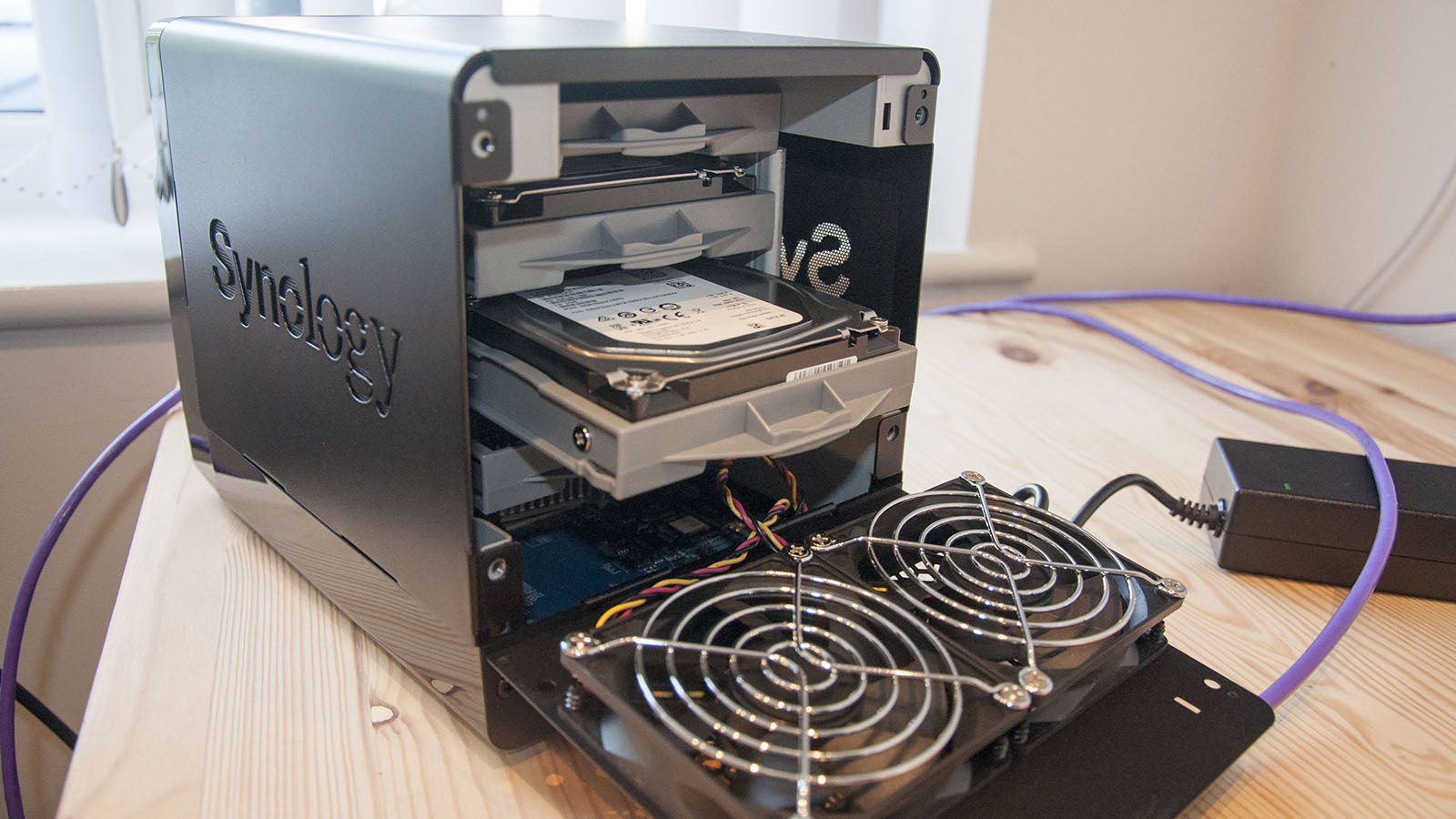 Probably the least glamorous change is probably the most significant, the inclusion of two USB 3.0 ports. With these, you can attach external drives and expect to read and write to them at a decent speed, ideal for creating another level of resilience beyond that offered by the various hybrid RAID modes available.

With two USB 3.0 ports, you can do much more than just make it a print server, and it also allows you to put off the day when you’ll need a bigger NAS or one with a drive expansion system.

As four drive NAS boxes go this has most of the features that many home users will need without straying into the specialist requirements that other Synology products effectively address.

Synology’s claimed performance for the DS418j is 112MB/s reading and 87MB/s, under a RAID 5 drive pack and connection via a Windows PC. While the read speed is as high as you can realistically get with Gigabit Ethernet, the write performance slightly lags the numbers quoted for its predecessor, the DS416j.

Closer examination reveals that the higher DS416j numbers were writing to an unencrypted volume, where the DS418j was to an encrypted one, possibly explaining the difference.

These numbers are more than fine, unless you work for NASA, or enjoy moving terabytes of data around in your spare time.

As part of our testing, we ran the system with two Seagate Iron Wolf 4TB mechanisms in both RAID 0 and RAID 1 configurations, and we also configured it with a single Crucial SSD.

Using a single hard drive reading and writing at 112MB/s is achievable. Converting this single drive into a dual drive mirror pack reduced write performance to about 109MB/s. That’s not a bad trade for redundancy, we’d suggest. 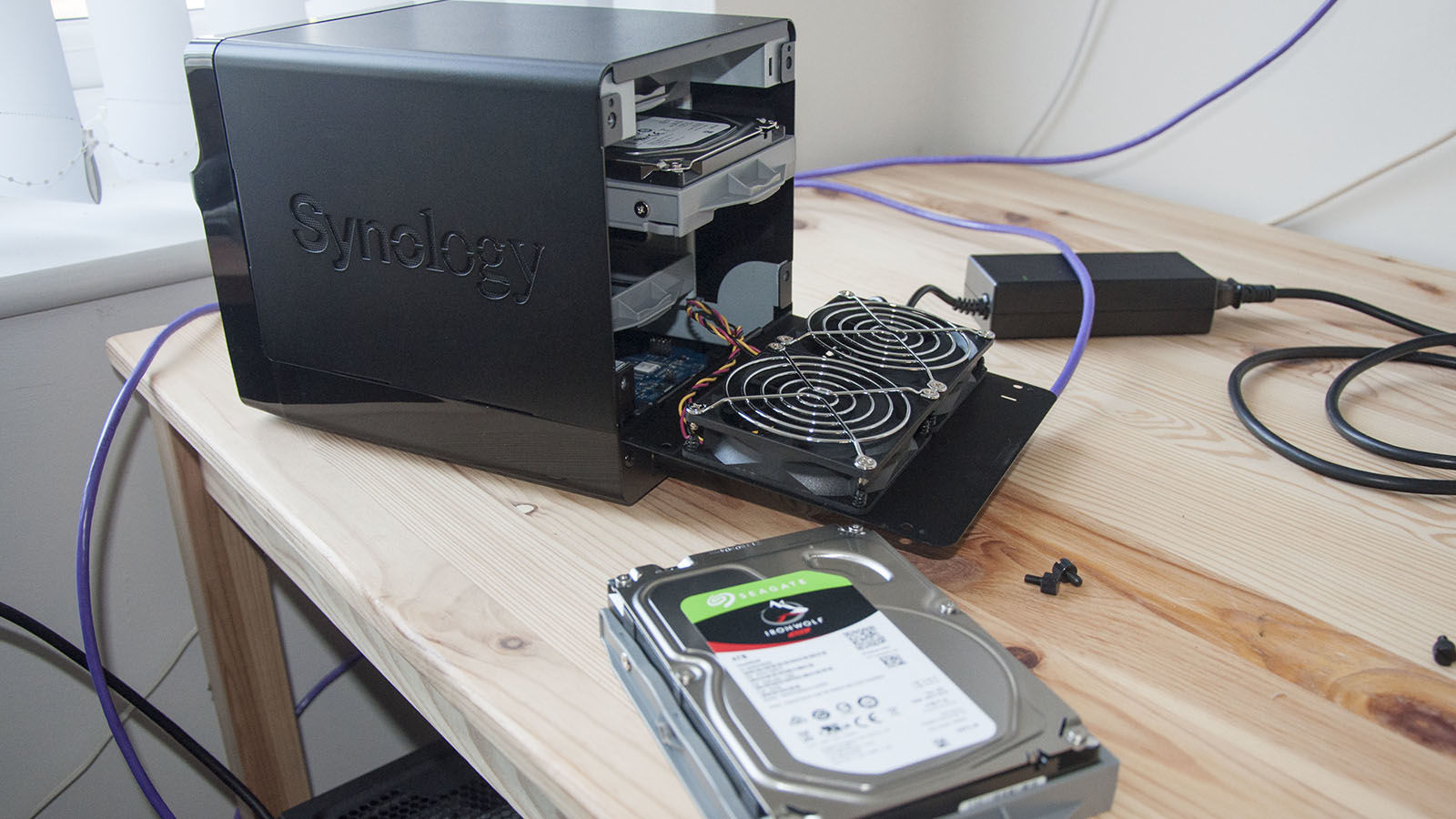 While you can use SSDs, and get the maximum possible speeds the DS1418J doesn’t offer the ability to use an SSD to cache conventional drives their recent DS1817 can.

The important detail to realise about performance on the DS418j isn’t these headline figures specifically.

What’s more relevant is that with the extra performance offered by this CPU and RAM combination, there is more performance left in reserve when the machine is file serving to perform other functions without noticeable impairment.

The bottom line is that if you like Synology’s DSM operating system, and plenty do, this provides an effective solution for those that like to stream media within their homes/offices and also offers the possibility of remote access.

Dual Lan is a feature of the similarly priced Netgear ReadyNAS 214, though you’ll need a link aggregating switch and computers with dual LAN ports if you want to exploit the potential extra bandwidth.

Overall, for the majority of home users, the DS418j is more than quick enough.