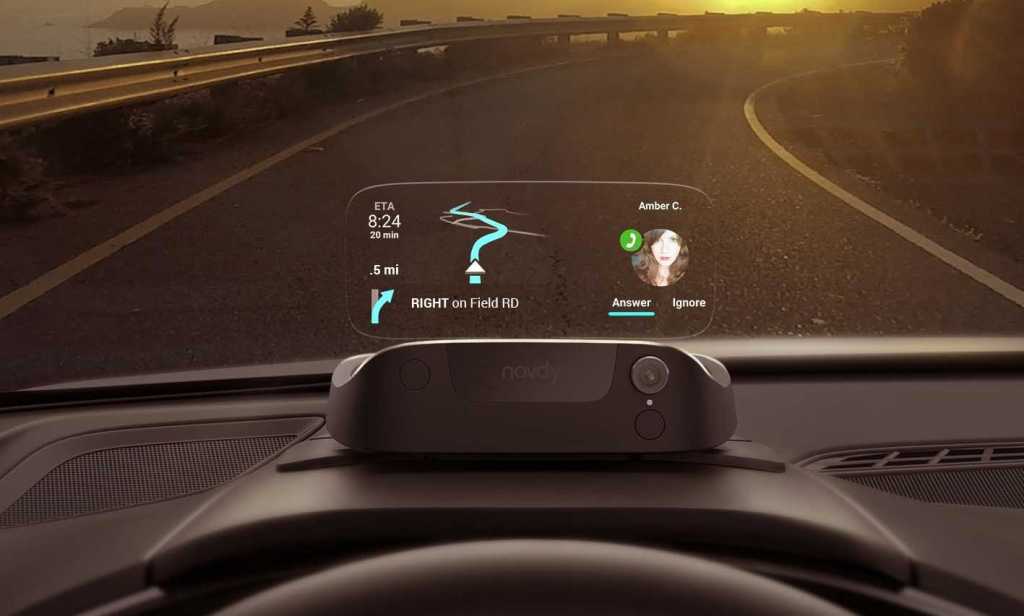 Navdy lets you add a futuristic-looking heads-up display to almost any car. It doesn’t just look cool: it works well and is genuinely helpful. The latest updates make it even better, particularly road speed limits. You can’t choose which satnav app to use, but the display itself is easy to customise to show exactly the notifications you want. The price will put it out of reach for many, but the few that can afford it won’t be disappointed.

Navdy is a heads-up display (HUD) that puts driving directions and notifications from your phone in your line of sight so you don’t have to take your eyes off the road.

It connects to your car’s diagnostic port, which also allows it to show lots of other information such as your speed, revs and other engine data that your car’s gauges might not provide.

It’s the kind of tech you find in high-end luxury cars, but although it’s slowly appearing in more affordable models, as long as yours has an OBD port – and all cars built after around 2001 do – then you can install this futuristic gadget.

Please note: Unfortunately, Navdy has gone into liquidation as of 26 November 2017 and it looks like the company will not be able to continue. For this reason, we no longer recommend buying a Navdy. It’s unclear whether all functions of existing units will continue to work, but support has already ceased and there will be no more updates.

Currently Navdy costs £399, or US$399 from the main US site, which is quite a lot but considerably less than the £799 it originally launched at.

While you can buy cheap HUD from ebay, this is a top-quality device that can’t really be compared to those, and it does far more.

The unit itself attaches to an adhesive dashboard mount using strong magnets. It isn’t exactly discreet, and you’ll probably want to remove it when you park up.

If you can’t mount it on your dashboard for some reason, two other mounting options are included in the box but the adhesive mount is the best choice for most cars. 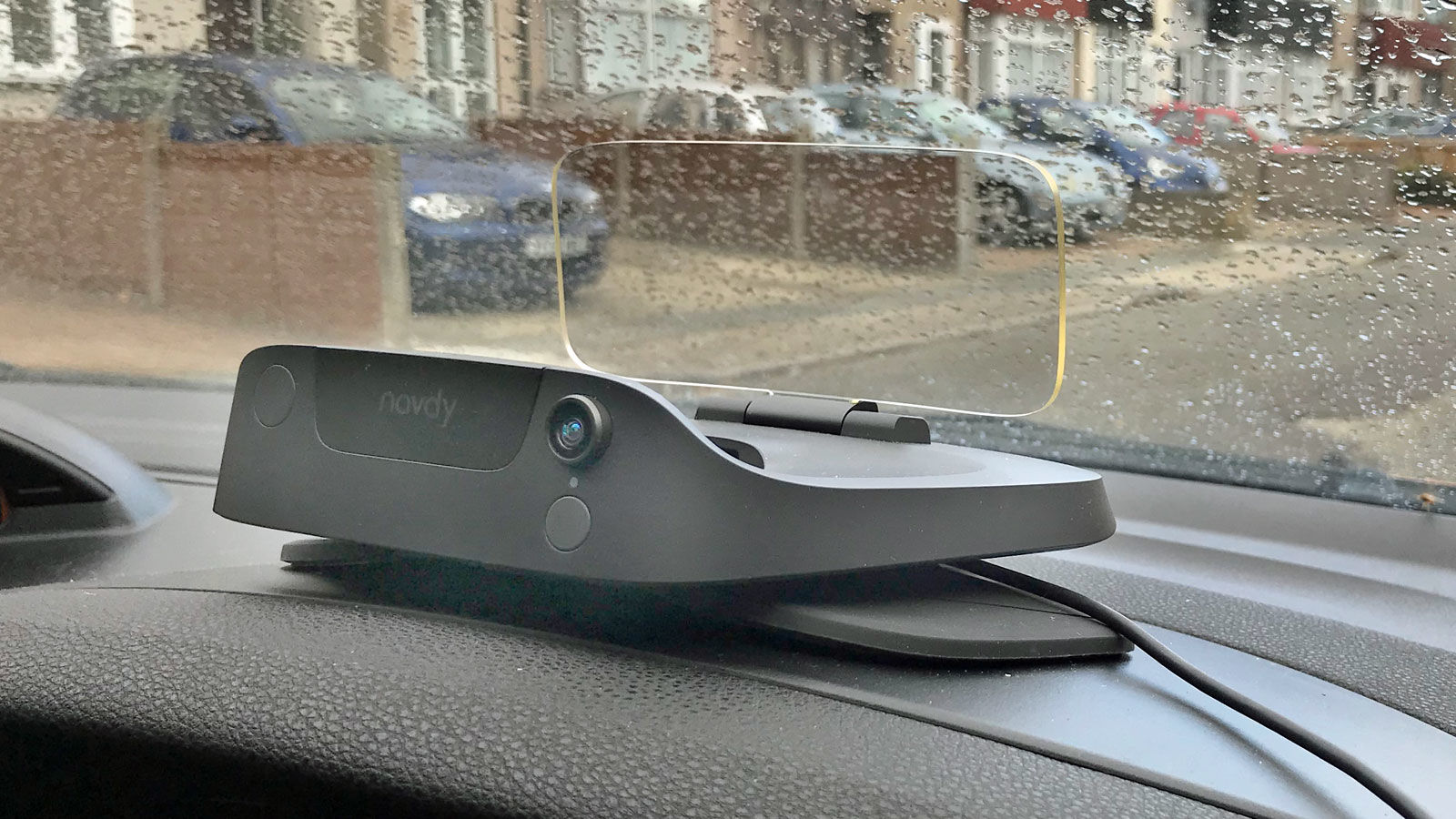 The display is a curved plastic screen that folds down flat when you’re not using it – a fabric cover is bundled to help protect it.

A tiny projector (said to be 40 times brighter than a phone screen) beams the image on to a reflector which bounces it back onto the plastic screen. It works well and the image is easy to see in your line of sight. Navdy says the image is projected in the distance, but it looks much like the dials in your instrument cluster so your eyes have to refocus very slightly to look at the screen.

The real benefit is that you don’t have to move your eyes – or head – so it’s much faster and easier to see that information. And as some cars have their satnav screens quite low in the centre of the car, this is a real bonus.

The screen is also extremely bright so there’s no issue seeing it even on the sunniest of days. And the ambient light sensor means brightness is adjusted automatically as conditions change – it’s perfectly usable at night, too.

Plus, the display doesn’t disappear if you wear polarised sunglasses. This can be a problem if you use your phone as a satnav, but it’s a non-issue with the Navdy.

While it’s possible to think of Navdy simply as a second screen for your phone, it’s more than that. It has its own built-in GPS with dead reckoning and offline maps so you can still get directions even if your phone isn’t connected or doesn’t have a data signal. 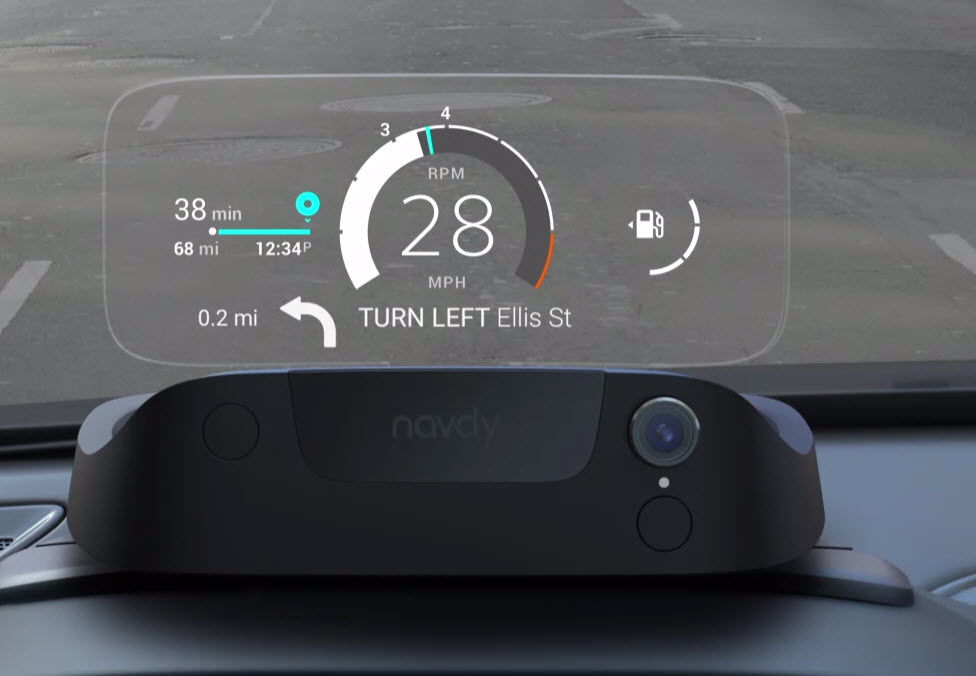 The screen is customisable so you can choose what information you see in the left, middle and right-hand areas.

The main control is a dial which attaches to your steering wheel using a quick-release rubber band. This talks to the main unit via Bluetooth and has a button for selecting options after you’ve scrolled through using the dial.

It’s also possible to use hand gestures by waving your hand left or right in front of the screen, much like the natural gesture you’d use to dismiss something. This way you can remove a notification, answer or decline a phone call or read a message. And it really works well.

Your phone also connects via Bluetooth, and audio can be routed via your phone to your car’s speakers so long as your car has a stereo with a Bluetooth input. This can be a bit tricky to set up, but after a bit of trial and error, I got it working with an aftermarket Parrot Asteroid Android head unit.

The Navdy app is an integral part of the system and can also be used to change settings, which can be a little easier than using the dial. You can set a destination in the app, or use your voice to dictate one. 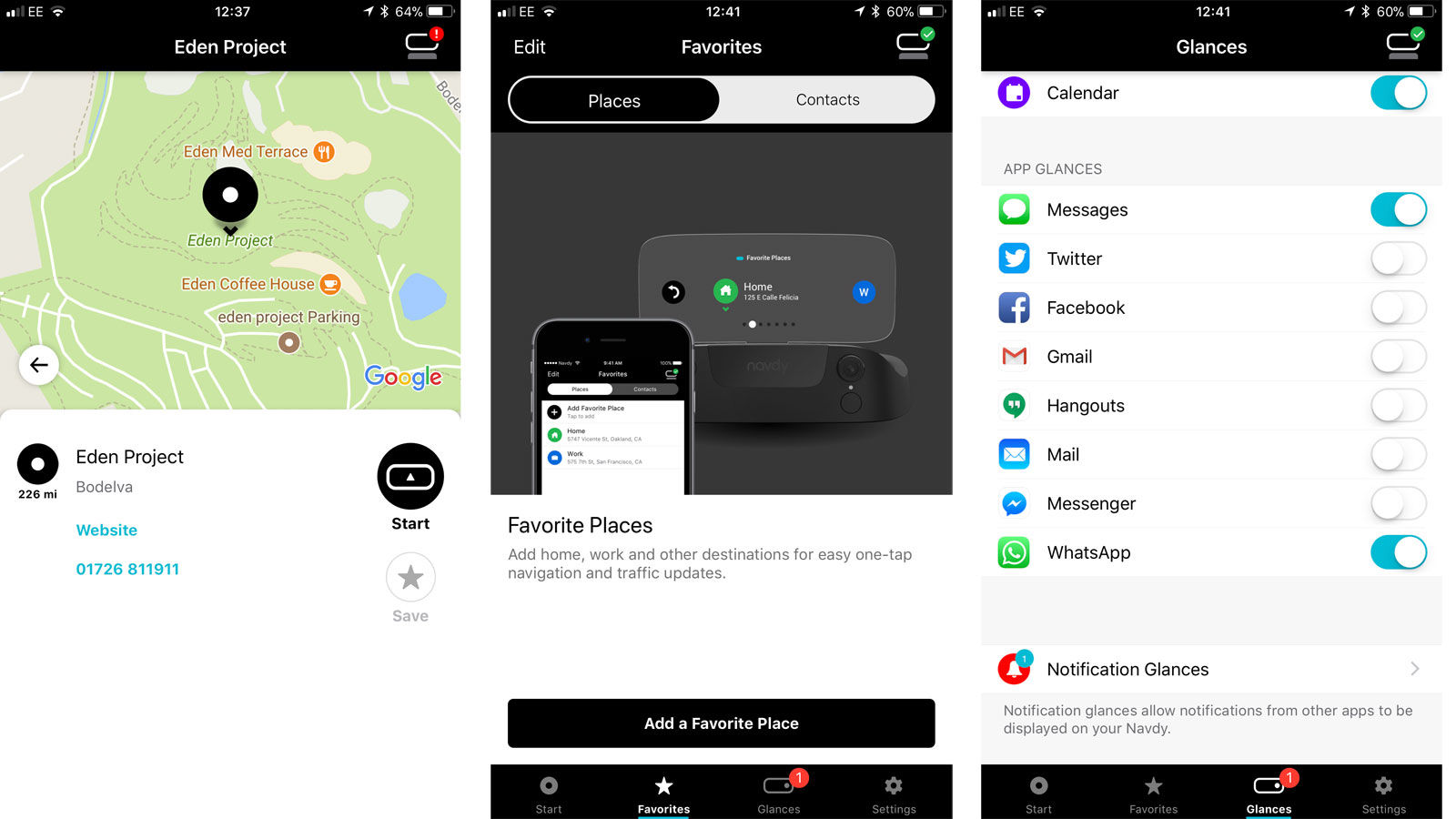 Crucially, the app has to be open and running for it to connect with the display. Once it’s running you can put your phone to sleep, but it won’t work if you quit the app.

So what can Navdy do? As well as all the stuff already mentioned, it can also control music playback from your phone, display notifications and messages from certain apps and read out your emails.

You can reply to messages, but only with canned responses selected using the dial. 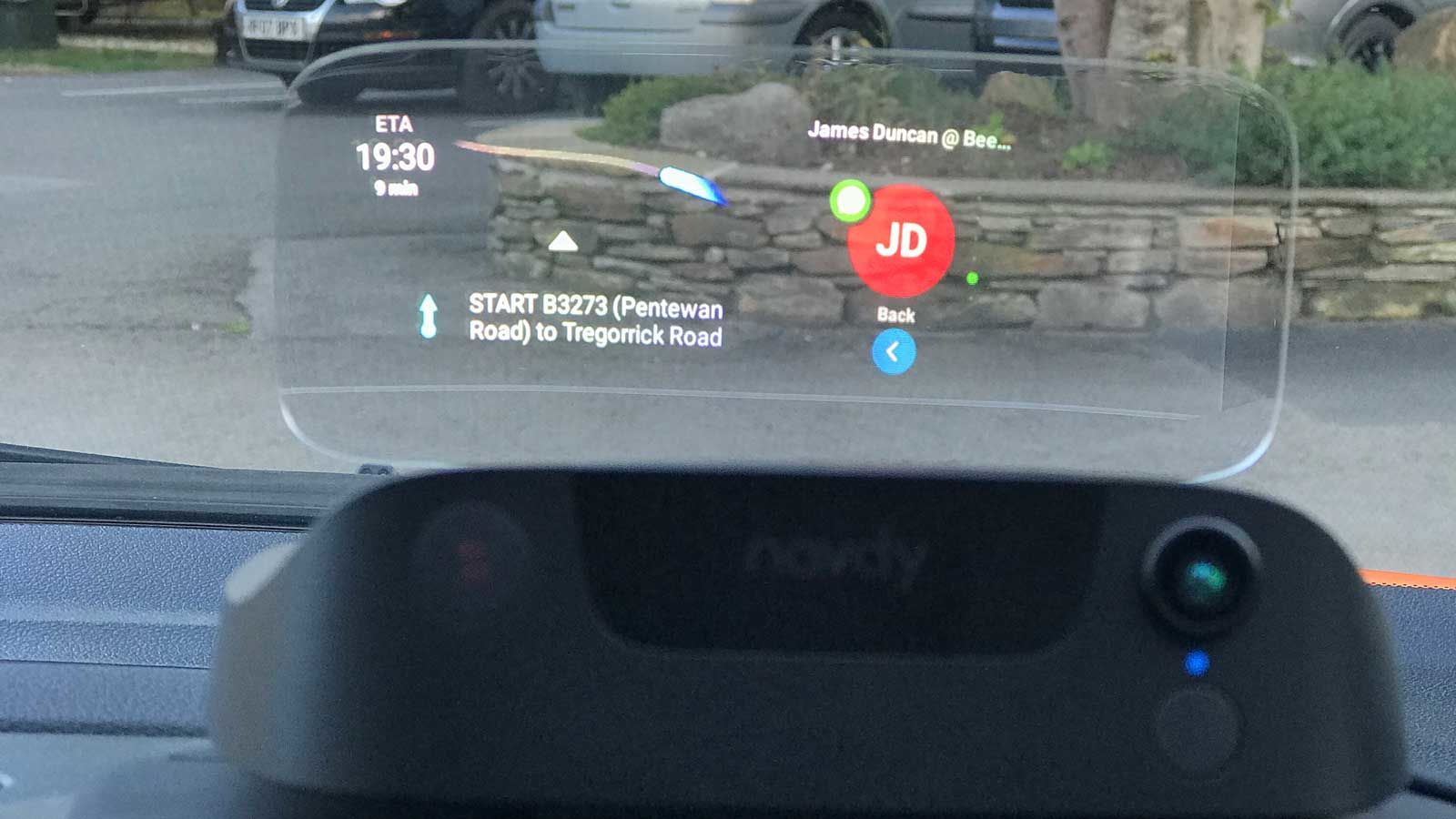 If you’re the kind of driver who cares about fuel economy, Navdy can also rate your driving style and – in certain cars – display the current and average miles-per-gallon along with other information such as fuel level and the engine’s coolant temperature.

In the latest firmware update – v1.3 – a few new features were added, chief among which were road speed limits. These can be shown as icons (currently US-style rather than UK road signs) or as text below the virtual speedometer. Most useful is the blue line on the speedo itself which is the simplest gauge of whether you’re over or under the limit.

In our tests on UK roads, these worked well. The display changed exactly when the limit changed. However, it would be nice to have advance warning of changes (just as you get with real road signs) rather than only when they apply.

Another big addition is regional accents. These include UK English, but the app merely gives you a list of names rather than the accents the names represent, so it’s a case of trying each one to find what you’re after.

The on-board maps are provided by Here and you also get up-to-date traffic info which helps with navigation. The map is perfectly clear thanks to a bright blue line showing where to go, voice directions (through your car stereo) and a proximity bar which shows how close you are to the next turn. 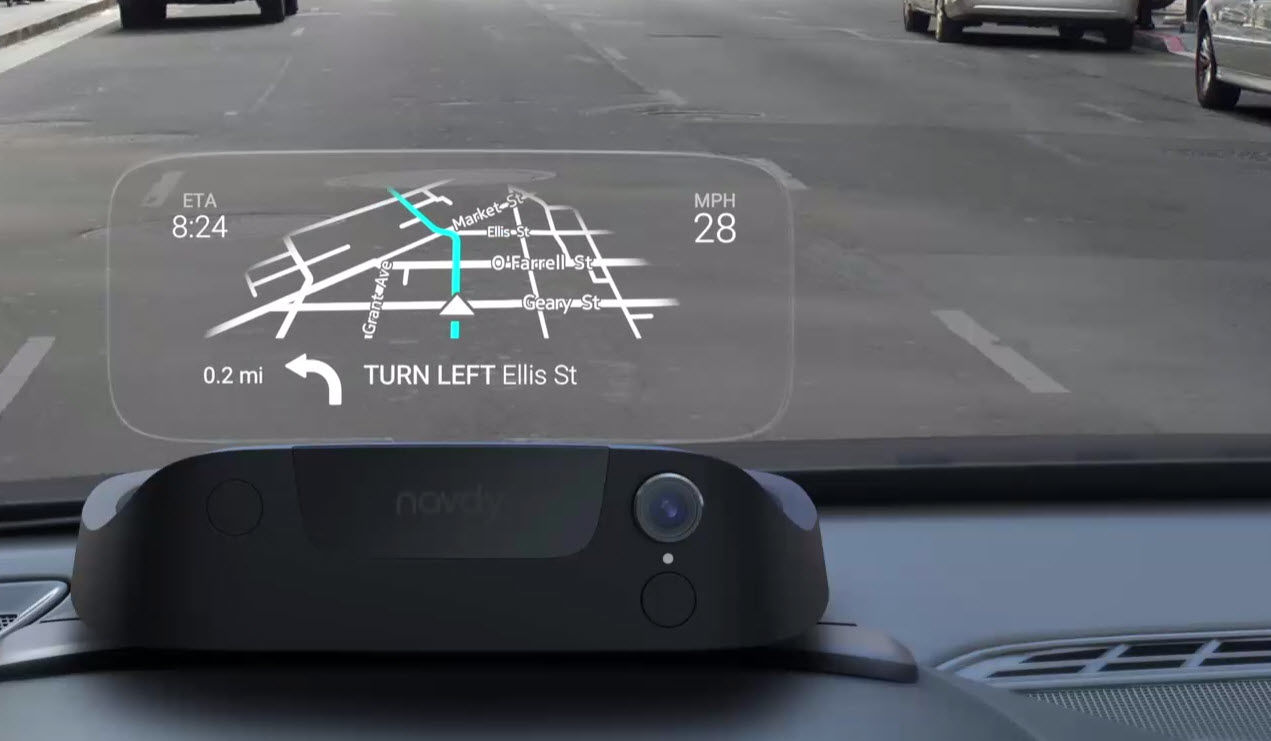 However, directions weren’t always the easiest to follow in rural areas, where it also had a tendency to send us down single-track roads rather than using main roads.

In general, it’s very good, but it’s a shame you can’t choose your favourite satnav app, such as Waze.

Is Navdy worth the money?

Navdy is undoubtedly a very cool gadget and it does live up to its promise of making it safer to drive. It’s particularly good when you’re in unfamiliar areas, bringing speed limits and directions right into your line of sight so you can concentrate on road hazards instead of looking down to check if you’re speeding or not.

For the most part it works well, but it will never look integrated into your dashboard. And if you already have a good phone mount and can place your phone somewhere near your line of sight, it’s possible to do a lot of what Navdy does with various apps.

If money is no object, then Navdy is a great way to add a HUD to your car.