The Gear Fit2 Pro is a solid choice if you want a slim GPS fitness tracker that works well on Android or iOS. It has more features and a vastly better screen than the similarly built Fitbit Charge 2, but costs £90 more. For less than £209 you could get a Garmin Forerunner 35 with GPS, but the design and screen is not as premium as you’ll find with the Fit2 Pro. Samsung has made a fitness tracker that costs more than rival products, but over £100 less than its smartwatches but packs in most of the same features.  It does try to do too many smartwatch things with a screen that doesn’t suit though. Buy it if you like the design, but if it’s not a deal breaker you can opt for something cheaper with the same basic GPS functionality.

Activity trackers are big business, or at least they should be. But Jawbone and Pebble have gone under leaving Fitbit as something of a behemoth in the market, supported by the likes of Misfit, TomTom and Garmin.

Not content with making just its high-end smartwatches, Samsung has upped its activity tracker output with the clunky-named Gear Fit2 Pro. Introducing swimming capabilities, continuous heart rate monitoring and more, it offers small but important improvements over its predecessor for fitness enthusiasts.

The Fit2 Pro doesn’t come cheap at £209 direct from Samsung, which is right at the top end of the fitness tracker market, but it does have some brilliant features including on-board storage for music and GPS, as well as its smartwatch features such as the ability to display notifications from your phone.

This prices the Fit2 Pro at £60 more than the Fitbit Blaze, a competitor that is marketed as a full-on smartwatch. But the Fit2 Pro has built in GPS tracking, and makes it a better bet if you’re on a budget than the bells-and-whistles of the £299 Fitbit Ionic.

It is also oddly placed in Samsung’s own line-up, with the Gear Sport at £299. The previous generation Fit2 is still available from some retailers at £149, and makes the Fit2 Pro with its GPS look a little overpriced. Add to that the Gear S3 at £349, and you have three Samsung watches with GPS fitness tracking capabilities from £209 to £349.

So why would you plump for the cheapest one? 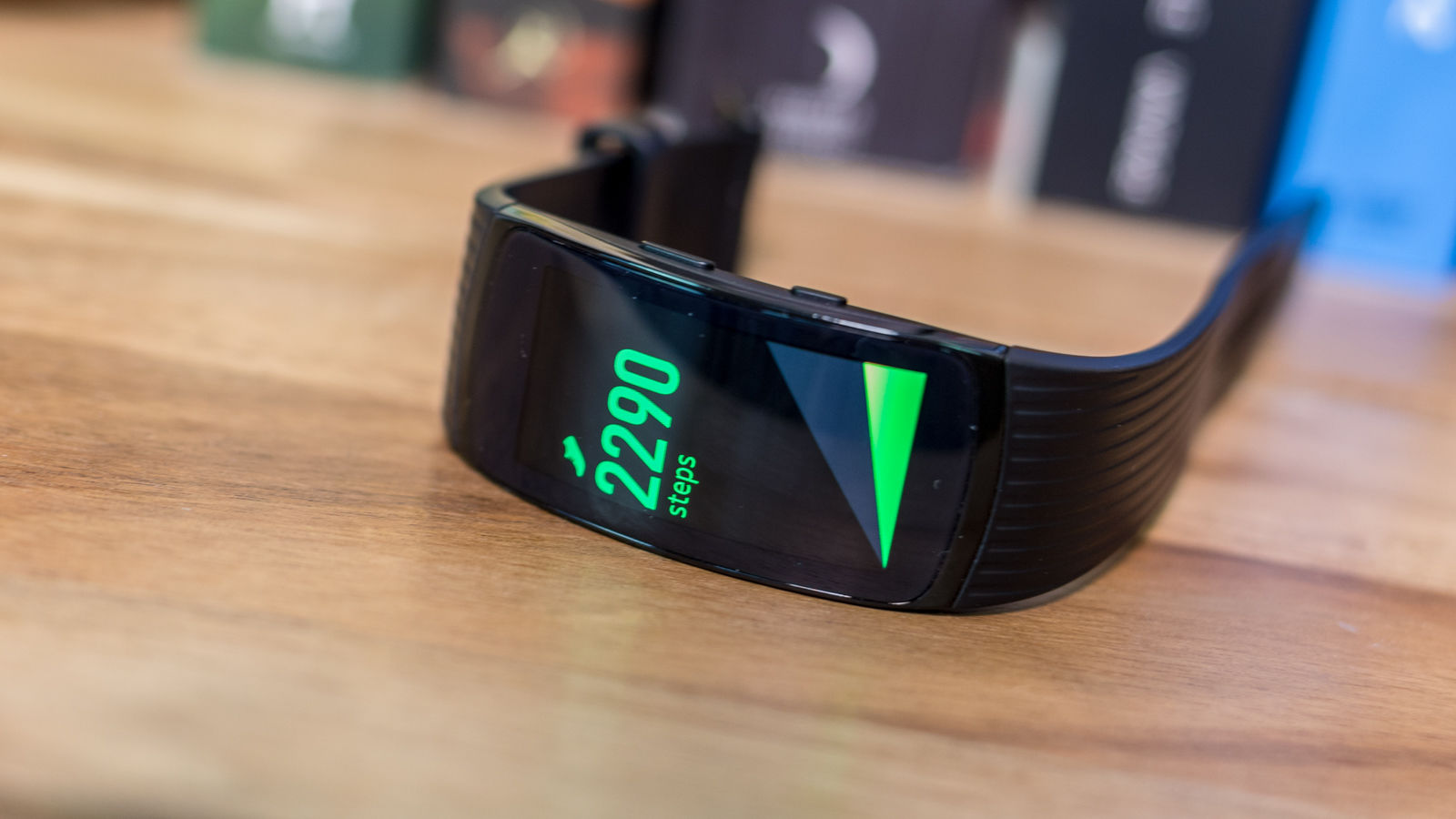 The Gear Fit2 Pro is more practical than stylish, with slim band housing the curved touchscreen that is slightly smaller than the Fit2’s, at 1.5in diagonally. We still think the screen feels plenty big enough, and can provide lots of information without looking overcrowded.

The strap does feel a little cheap though, and the ridged design isn’t the best looking, but It is a better regular clasp design than last year’s Gear Fit2. The plasticky feel is hard to shake simply because the Fit2 Pro is, well, made of plastic.

It’s not as premium as Samsung’s Gear S line of smartwatches and is quite functional and nothing to get excited about. 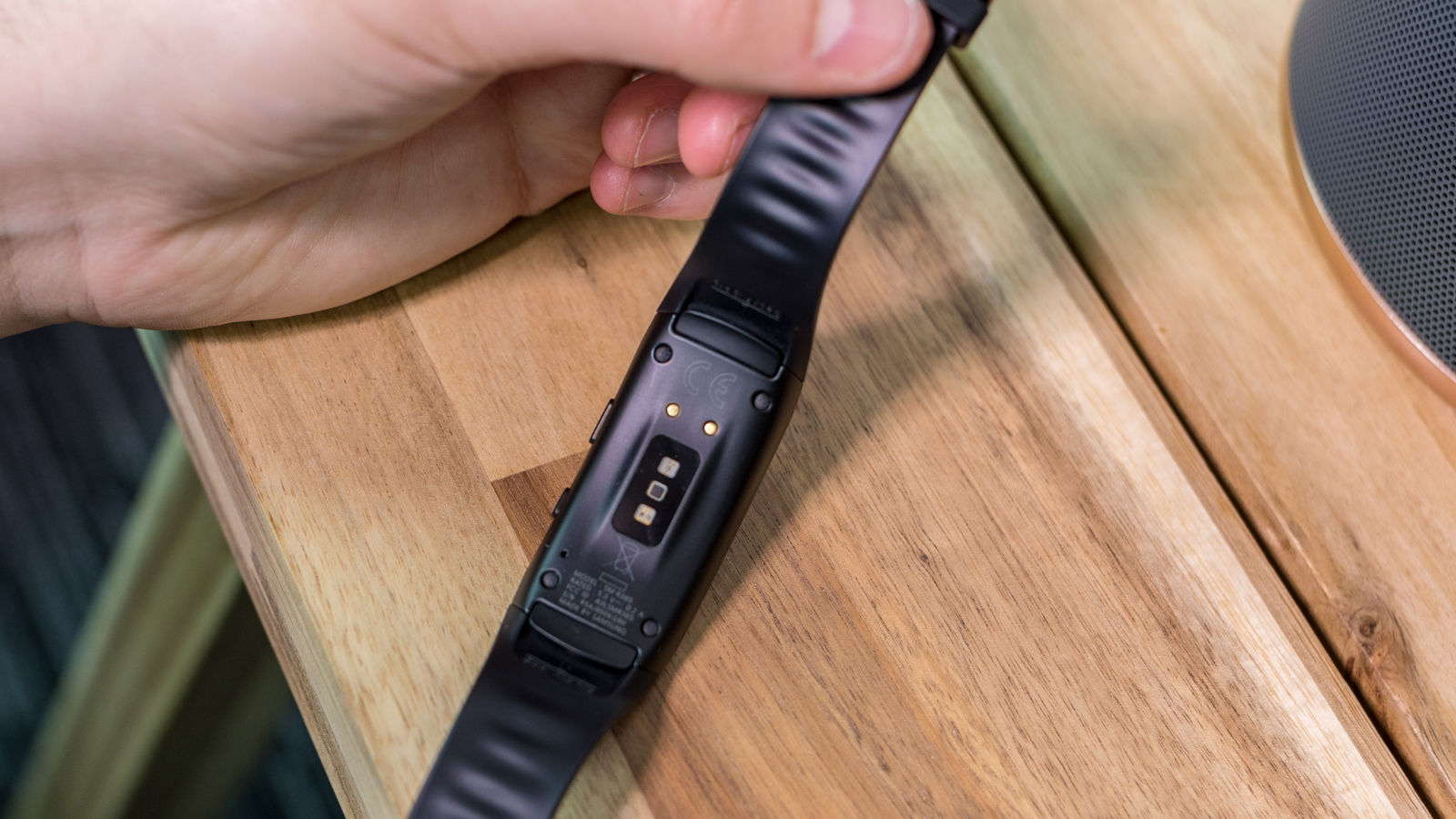 The screen is crisp and is also bright and brilliantly colourful. The downside is that it’s quite shiny and reflective, which could cause some difficulties in direct sunlight. It’s made with Gorilla Glass 3, though, so it has proven to be hardy and durable.

The body of the Fit2 Pro that houses the screen is reasonably thick, but when you’re wearing it, it curves with the wrist to look and feel comfortable and certainly not too bulky. It weighs a small 34g, too.

Available in red or black, the colour choices are a bit limited and might not appeal to all, and you’ll find that its sporty aesthetic doesn’t look the best with evening attire. You’ll need to choose from small or large at checkout, depending on the thickness of your wrist.

The small 216 x 432 resolution display on the Fit2 Pro is an OLED panel, with decent touch responsiveness. The shape means all the apps are squeezed into a thin portrait profile though, and we missed the rotating bezel input you get on the Gear S3. 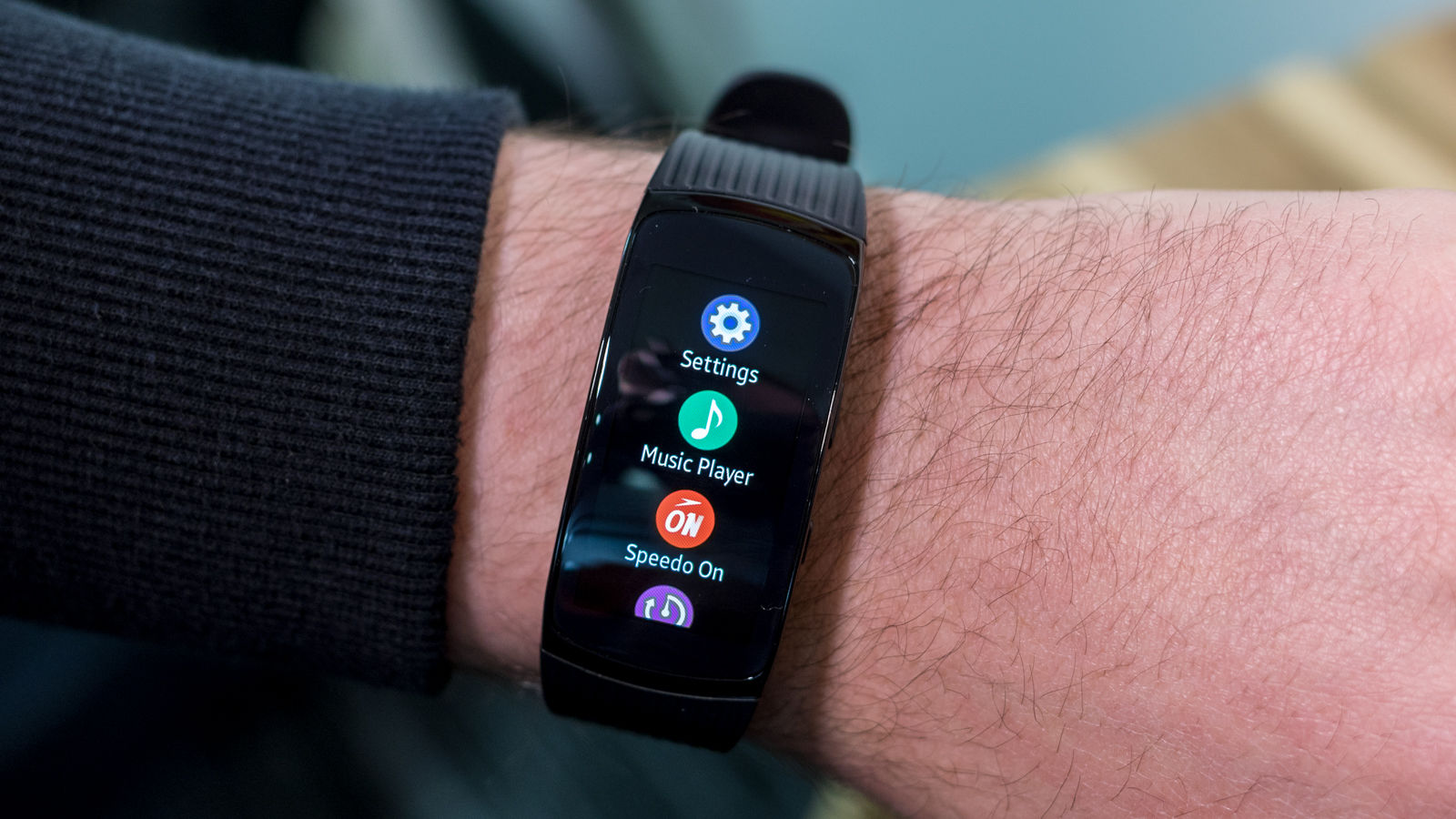 But the Fit2 Pro is necessarily smaller at 51.3 x 25.0 mm to cater to your taste should you be looking for an alternative to a Fitbit such as the Charge 2.

The Fit2 Pro runs a Tizen OS that’s largely based around widgets. You can add new widgets to the list of screens that you can swipe through beyond the main watchface/home screen.

The Galaxy App Store means that there are more than 3,000 apps and watchfaces available to download, allowing you to completely customise the watch and its features to suit your needs.

They’re all quite flaky third-party offerings though, and Tizen’s strengths lie in its simplicity and the quality of Samsung’s own apps. You can choose and stylize several watch faces to display the stats you prefer to see, and the OS uses black themes to save battery life (white light on OLED panels destroys battery life).

And thanks to the on-board storage, you can use Spotify to download offline playlists of up to 500 songs to your Fit2 Pro, and stream them to a pair of Bluetooth headphones while you’re out for a run or working out in the gym, for example, without needing to bring your phone along with you for the ride. 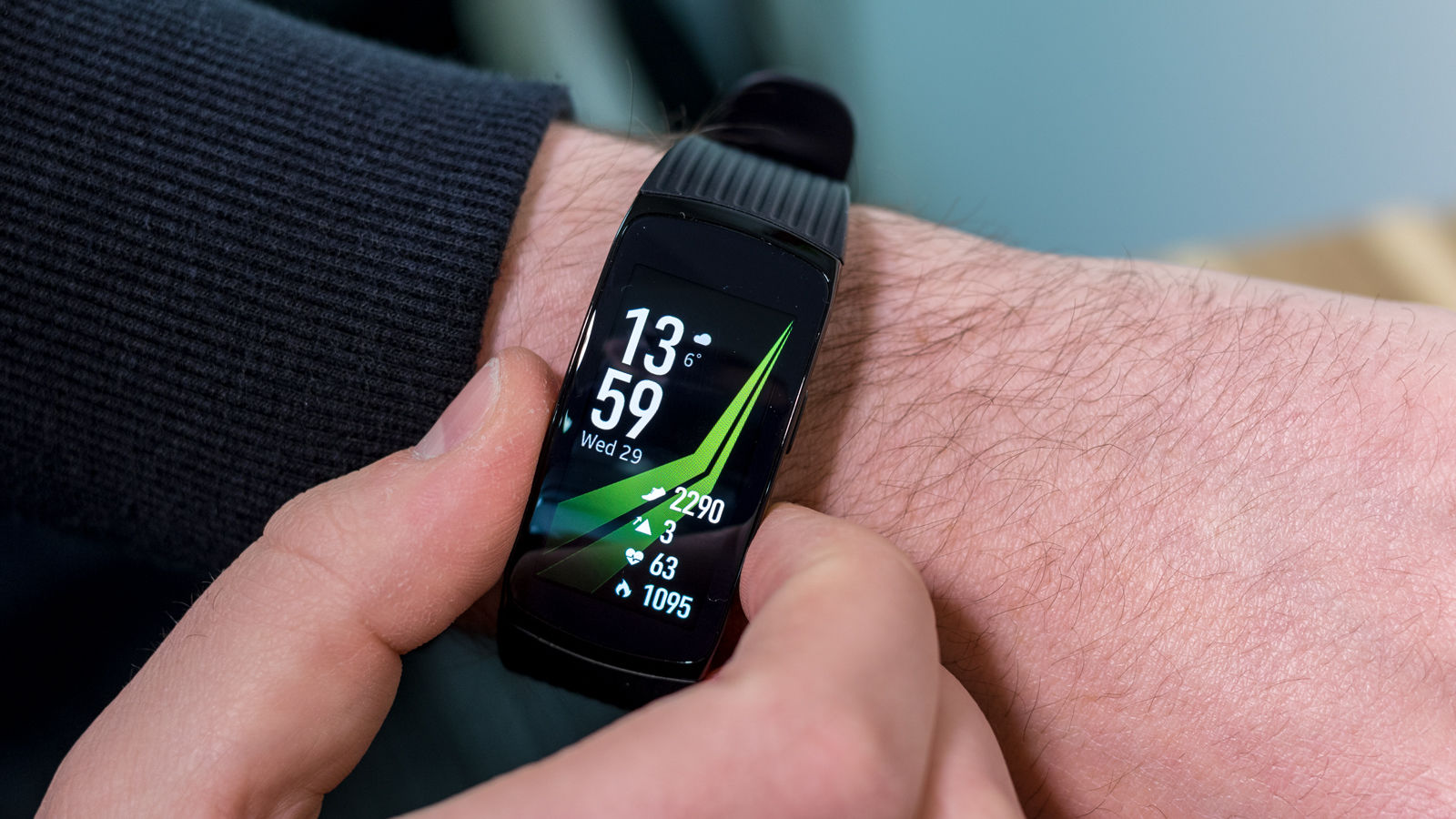 You can also use the built-in GPS to map where you’ve been running or cycling, another reason you’ll be able to leave your phone behind. On-board GPS will also make tracking the pace of your workout more accurate, but it will eat up the battery life quite rapidly.

You’ll need your phone to see all your results though, as these don’t display historically on the watch.

The Fit2 Pro is pretty good at auto-detecting walks and runs, but for the latter you have the option to manually start and stop, which will result in better, more accurate results.

Your heart rate is being continuously monitored by the Fit2 Pro for more in-depth summaries of your daily activity, and the new model also adds automatic activity detection to save you from needing to tell the band that you’re about to start a run or a bike ride, for example.

If you’re keen to keep track of your calorie intake, you can now do so directly on the Fit2 Pro. Doing so will offer up advice on how much exercise you should do in order to reach self-set goals, and how many calories you should aim to cut out per day.

For swimmers, the Fit2 Pro is water resistant up to 50 metres, and Samsung has teamed up with Speedo to offer swim tracking via the Speedo On app. It gives summaries and read outs of your stroke types.

This is a welcome addition but frustratingly it doesn’t always play nice with Samsung Health, the app that computes all the other data from the Fit2 Pro on your phone. You’ll have to use both in tandem as the Speedo On app also can’t measure your heart rate whilst you’re swimming. 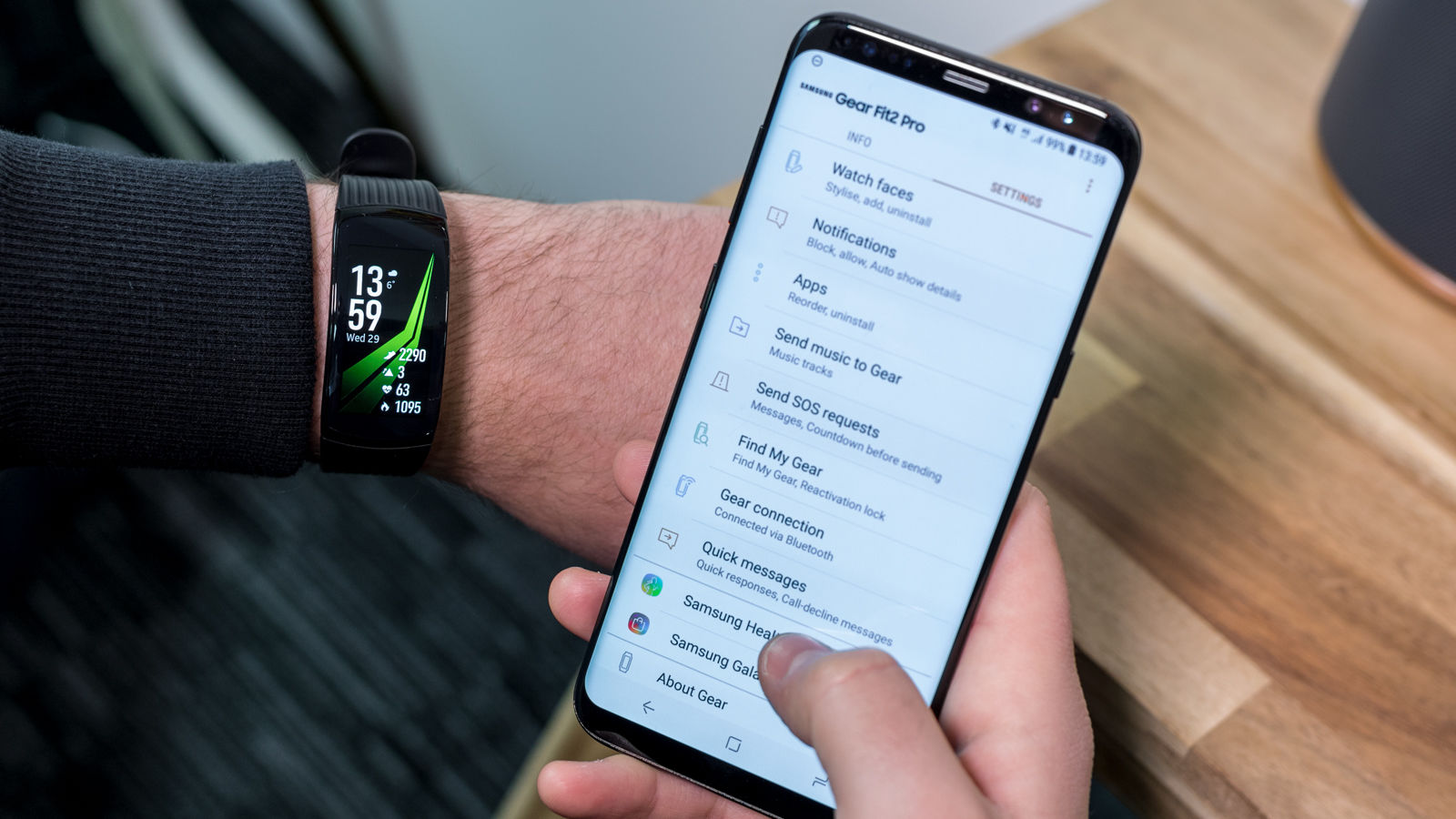 To make the Fit2 Pro work even better in the water, Samsung has added a Water Lock Mode that detects when you’re underwater and will disable the touchscreen to prevent any unwanted interaction caused by the contact of the water itself, which works well.

Other widgets available include handy caffeine and water trackers to help you keep on top of your intake, encouraging you to cut down on coffees and drink more glasses of the good stuff. But these are obviously not automated, so you’ll need to remember to keep it updated if you want that data recognised.

There’s also support for Under Armour, MapMyRun, Endomondo and MyFitnessPal, as well as the ability to carry out tasks from your wrist such as turning your heating down on your Nest thermostat or ordering an Uber. 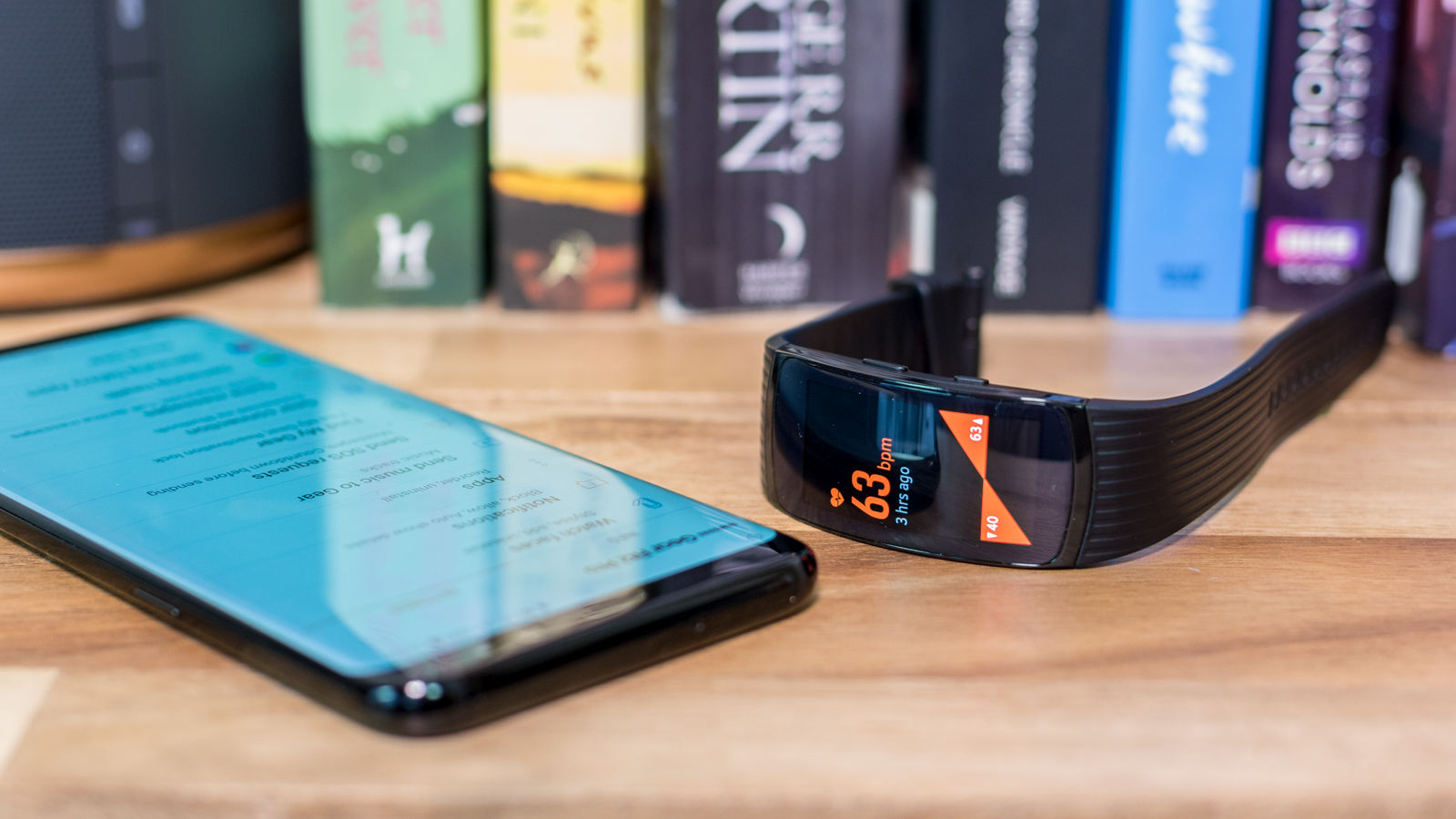 The Fit2 Pro has a 200mAh battery, which lasted consistently with Wi-Fi on for about three days, but with GPS kicking in it ran down a lot quicker (Samsung quotes nine hours of continuous use with it on).

Missing from the Fit2 Pro is an NFC chip for wireless payments via Samsung Pay, which seems a real shame when you consider how many other great features the device has, but with a price tag that’s already pretty high, perhaps it would have made it just that bit too expensive.

The Fit2 Pro is compatible with Android and iOS and works well on the latter, but as with the Gear S2 and S3, the experience is more fluid and easier to set up with an Android phone – and predictably we had the best performance when connected to a Samsung phone.