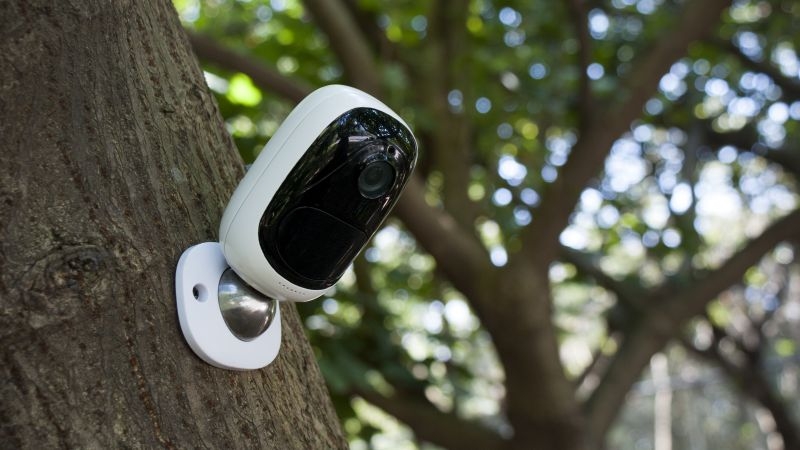 If you’re looking for a versatile security camera, the Argus is for you: it’s completely wire-free, can be used indoors and outdoors, and features an easy to use magnetic hinge for angle adjustment. It boasts high-quality 1080p HD video recording and live streaming capabilities, along with an advanced PIR motion detection system for fewer false positives. There’s no cloud storage, but there’s an optional microSD card slot for local storage of photos and videos. The only issue for some is the requirement of standard batteries, rather than including a rechargeable lithium-ion battery. Besides, it only costs £99, making it a bargain and a great option for those looking to invest in smart security for the home.

We’ve spent some time with the impressive Reolink Argus smart security camera, and here’s what we think about it. Spoiler: price doesn’t always reflect quality.

The camera has now been replaced by the Argus 2 so read our review of the new model.

The Reolink Argus is readily available to buy in the UK, and will set you back £99.99, making it one of the cheapest smart security cameras around. But while you may assume that the low price tag means it isn’t good value for money, you’d be wrong.

Other indoor and outdoor cameras, like the Logi Circle 2, cost more at £199.99, and still don’t boast features that the Argus does.

It’s great value for money, and can be picked up from the Reolink website for £99.99 with free worldwide shipping.

The Reolink Argus is fairly unassuming-looking security camera – it’s rectangular in design with rounded edges, and kind of looks a bit like a tall egg. Despite being completely wire-free, it’s smaller and lighter than other security cameras we’ve seen measuring in at 113 x 65 x 54 mm and 260g, although the batteries do add a little more bulk to the camera. But hey, it’s a static camera, not a smartphone so it shouldn’t matter too much.

The tall egg connects to a magnetic swivel base, providing you with the ability to essentially angle the camera however you’d like, no matter where it’s attached. Whether it’s the ceiling, wall or corner of the room, the magnetic base provides swift, easy camera angle adjustment.

There’s only a tiny delay (less than 1s usually) on the Reolink Argus app too, allowing you to instantly see any adjustments you make to the position of the camera.

The swivel base itself can be screwed into any surface, from walls to trees, thanks to the included fixture. But while the swivel base makes adjusting the camera much easier, it’s not secure – even when the base is secured with screws, you can easily remove the Argus simply by pulling it off its magnetic hinge.

That’s why Reolink also provides a fixed outdoor security mount for external use – instead of magnets, it uses a good old-fashioned screw and socket hinge for a more secure connection.

The main draw of the Reolink Argus is that it’s completely wire-free – it doesn’t even charge via microUSB. This makes the camera extremely versatile as it doesn’t need to be placed near a wall socket, inside or outside. Yes, we said outside – the Argus boasts IP65 water resistance, meaning it should survive a stint in the rain or snow if left outside.

It means that you can move the Argus constantly if required, monitoring different areas on different occasions. The wire-free design and waterproofing gives you a sense of freedom – as long as the camera is in Wi-Fi range, of course. 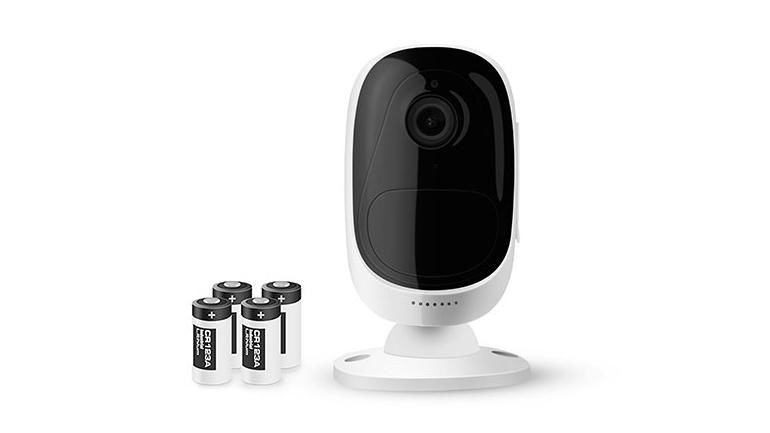 As the Argus is completely wire-free, it relies on battery power. Not a rechargeable Lithium-ion battery included in many smart security cameras, oh no; the Argus requires CR 123A batteries for operation. They’re readily available in the UK, but only via select retailers – chances are your local corner shop won’t stock them, and you’ll have to order them online.

You do, of course, have the option of using rechargeable CR 123A batteries, but this will be an additional expense as those provided with the camera are disposable.

Our only real complaint about the design of the Reolink Argus? The lack of a black variant. The white design does look sleek, but it makes the Argus stand out in many environments, especially when left outside. The idea of a security camera, to us anyway, is to blend in, and we don’t feel like the white Argus does the best job in that regard.

Let’s delve a little deeper into what the Reolink Argus can do. First up, it features a 2Mp camera – while that may not seem impressive, it offers Full 1080p HD video capture and live streaming, providing a more detailed streaming experience when compared to the likes of the Ring Stick Up cam and the Y-Cam Evo.

It also features a 130-degree wide angle lens, reducing the number of possible blindspots in the room/area. And for when it gets dark, the Argus features night vision up to 33ft. While the clarity of daytime recording can’t be matched at night, the night vision capabilities are more than enough to identify people and objects.

The Reolink Argus camera’s live feed can be accessed by iOS and Android apps. Unlike other cameras that can take 10-15 seconds to activate when the app is opened, you’ll be able to access the Argus stream within 2-3 seconds of the app opening. It’s fast and responsive, just what you want from a security camera.

It also provides motion detection via a built-in PIR Motion sensor. Reolink claims that the PIR sensor is particularly good at picking up human movements, and claims that it should dramatically reduce the number of false alarms. While we still got a few false positives during our time with the Argus, we did notice a lack of cat-related triggers.

Upon detecting motion, you have the option of triggering the built-in siren (helpful if protecting against burglars) along with notifying you via email and push notification, and to also capture video. Here’s the catch; the Argus doesn’t offer cloud storage, which is both a good and bad thing. 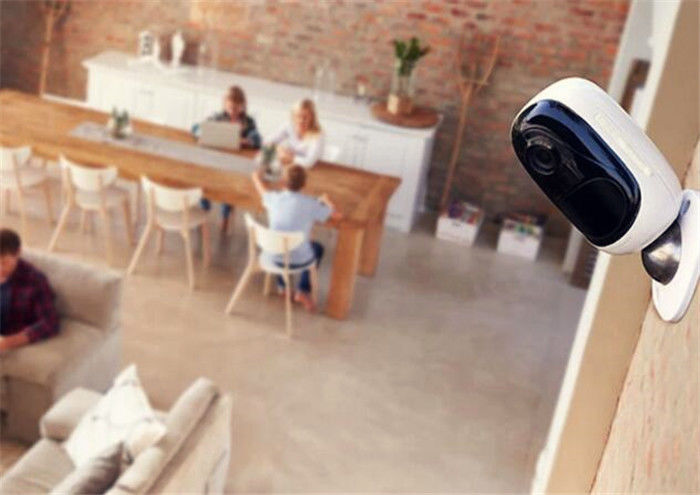 Generally speaking, most smart security cameras rely on cloud storage to keep your footage safe. While it’s convenient, it means it won’t record properly if the Wi-Fi connection is bad, as there’s no local storage to use. Many smart camera manufacturers also charge a monthly subscription, ranging from £2.50 to £15pcm, with very limited functionality if users opt out.

The Argus features a MicroSD card slot to offer local recording of video and photos, but it doesn’t come with the camera itself. It’s great because you’ll always have access to your footage, be it via the Reolink Argus app or via the microSD card itself, but it’s also an additional expense on top of the camera itself if you don’t have a spare laying around.

It also means that if a burglar steals your camera, you’re unable to access the footage. Not the best scenario for a security camera!

It’s not required, but if you want to get the most out of your camera, you’ll need to get one. But hey, at least you won’t need to fork out for a monthly subscription, right?

And like with many other security cameras, the Reolink Argus features two-way audio. This allows you to communicate with whoever is in the room with your Argus via the app, from your dog to your kids. It’s not a feature we use very often, but it’s still handy to have in certain situations.

In terms of battery life, the Reolink Argus lasts around 180 days on standby thanks to ‘advanced power saving technology’ although this will be shortened if you constantly use the livestream feature of the camera, or if it’s monitoring an area with constant motion. We’d advise investing in rechargeable CR 123A batteries if possible, as it’s better for the environment and saves money in the long run.

We’ve mentioned it above, but it’s time to delve a little deeper into the Reolink app for iOS and Android. The downfall of many smart security cameras is nothing to do with the hardware – it’s the accompanying app that can make or break the experience.

Thankfully, that’s not the case with the Reolink app – it may look a little dated, but provides deep customisation and a fairly straightforward UI.

Once you’ve followed the incredibly easy setup process, you have complete freedom to access and customise your Argus.

The quality of the camera is impressive, and the difference between 720p and 1080p streams becomes immediately obvious. Details that look soft in competing cameras look more detailed on the Argus, and you can also pinch to zoom using the app to get a closer look.

It’s easy to identify people and smaller details with a noticeable lack of encoding issues – cloud-based camera recordings may occasionally jump and become blocky when the internet connection becomes unstable, something not really seen on the Argus.

In addition to viewing your camera livestream and stored motion events, you can customise elements like whether the timestamp is displayed on the video, or tweak anti-flicker settings for indoor use. Even small things, like turning off the LED light on the camera, are available in the app. 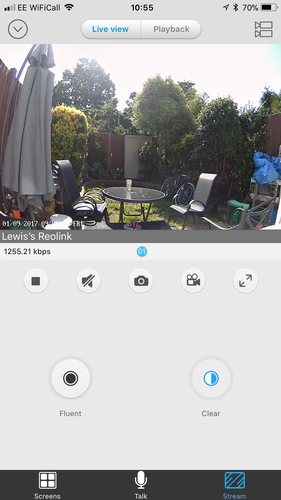 It also provides an in-depth scheduling system, allowing you to set up specific times and dates when the Argus should detect motion. This should stop the constant stream of motion notifications when you’re at home, triggering the camera yourself.

Our only complaint? We’d love some kind of Geofencing feature that uses your smartphone location to detect when you’re away from home to automatically enable motion detection.

The best customisation feature of the Reolink app? The camera comes with two streaming modes: Clear and Fluent. Clear provides a higher quality experience with a higher bitrate, but may feature a bit of a lag depending on the speed of your internet connection. Fluent, on the other hand, provides a lower quality stream but with improved performance.

While that’s a great idea, the app takes it a step further and allows you to customise everything, from the resolution, to the frame rate and even the maximum bitrate for each mode.

It means you can tweak the modes for better performance depending on the speed of your Wi-Fi; if, for example, your Argus is on the edge of your Wi-Fi range, you’d want to bring down the maximum bitrate and framerate to compensate.