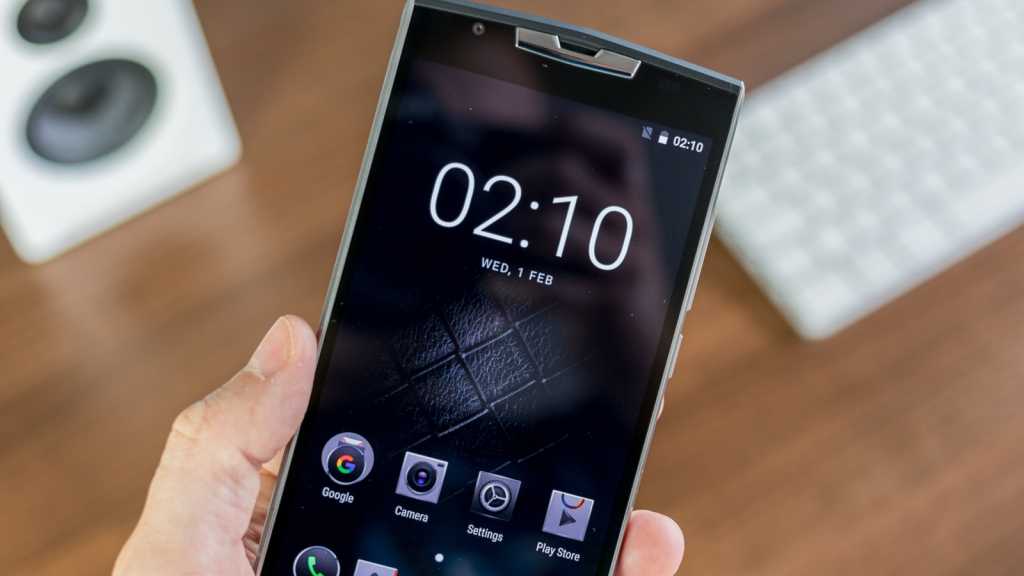 The K10000 Pro will be a great fit for anyone who’s been longing for a smartphone with a lasting battery. You won’t find any other smartphone that will go 33 days without being charged. Of course, the battery affects the design, and results in a quite bulky and very heavy phone, but overall the K10000 Pro is far from ugly. You simply will have to get used to its size. It performs admirably for a £139 budget phone, and provides a satisfactory user experience. If you’re fed up of always being on low battery and don’t mind the extra weight, the K10000 Pro will make you happy. But if battery life is not your priority, there might be something on the market better suited to your needs.

If you’re tired of charging your phone multiple times a day, or have been let down by your phone’s battery performances, the K10000 Pro will be a perfect fit. But such a powerful battery evidently makes for some serious compromises in design and performance. Find out all you need to know about the K10000 Pro in our review. 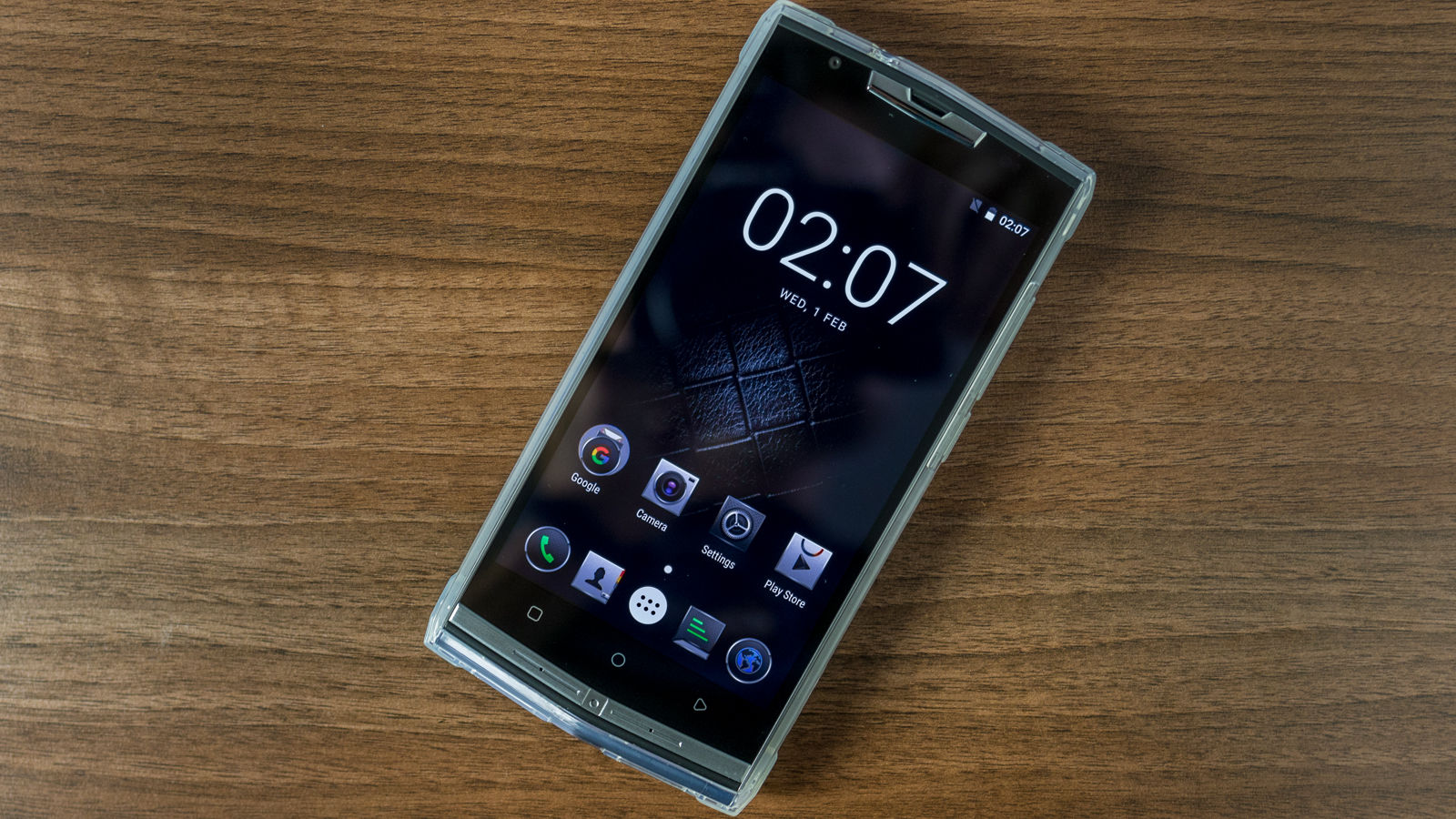 The Oukitel K10000 Pro was supplied to us for review by GearBest, which currently lists the handset for £139.69 ($179.99/151.57€). There is an option for free delivery to the UK, but keep in mind that you may need to pay import duty which is calculated at 20 percent of the value printed on the shipping paperwork plus an admin fee of around £11.

You can read our advice on buying Chinese tech in our separate guide.

The K10000 Pro’s design has obviously suffered from its enormous battery. The phone is bulky and, at 291g, it is also significantly heavier than your average smartphone.

Its dimensions (161.7×77.8x14mm) confirm it as one of the largest and thickest phones out there, which makes it hard to hold and use with just one hand.

Don’t even think of putting it in your pockets, unless they are extra large. After 15 minutes of holding it, your hand will start to feel the phone’s sharp corners.

However, its size does have a positive aspect: the K10000 Pro comes with a 5.5in screen with narrow borders. Large bezels remain on top and at the bottom of the phone, but its 88% body to screen ratio is more than satisfactory.

The buttons’ layout is standard: the volume and power/lock buttons are on the right side of the phone, but their difference in size ensure you won’t mistake them. The K10000 Pro also comes with a fingerprint sensor located on the back. Despite the phone’s thickness, it is easy to reach and use.

At the top of the left side, you’ll find the dual SIM card slot, which also allows you to add a memory card to expand storage up to 64GB. (Note, though, that you will have to choose between two SIM cards or one SIM and a memory card.)

The headphone jack is located on the top, and of course, the phone also has a selfie camera on the left of the top bezel. The camera and LED flash can be found in their regular positions at the back, above the fingerprint sensor. On the bottom bezel you’ll find three touch buttons for added control and, below, a loudspeaker and a Micro-USB slot. 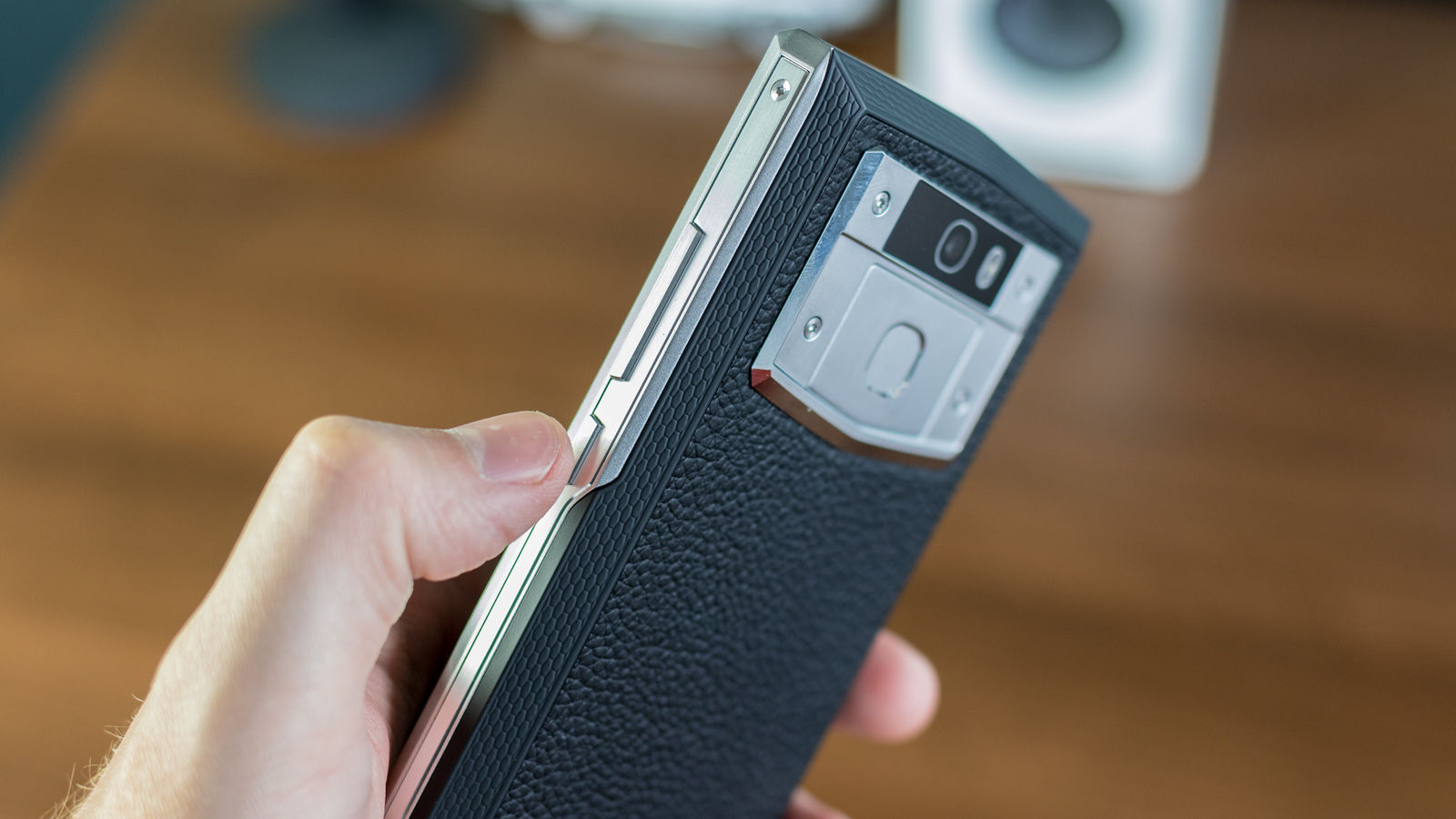 The back of the K10000 Pro is covered by Australian calf leather and the screen is made of corning Gorilla glass. These materials add protection: the leather improves your grip, so you will be less likely to drop it, and the Gorilla glass adds a great hardness to beat shocks and scratches.

The metal frame and exposed screws don’t make for the most attractive look, but overall the K10000 Pro’s design is as good as can be considering the massive size of its battery.

It also worthy to note that the phone comes shipped in a fancy box, comprising every accessory you’ll need to successfully use your phone and added extras. You notably get a silicone case, which helps with the sharp corners without adding weight, and a nice, fully covering leather case. As it will be difficult to put your phone in your pocket, the cases will protect it from your keys or scratching objects in your bag.

The K10000 Pro’s heaviness takes some getting used to, but it is the price to pay for a powerful battery. Overall, the phone’s design is satisfactory: it has a sturdy feel and does not look like a cheap budget phone.

The K10000 Pro performs accordingly to what you’d expect from a phone in this price range. It is powered by a Mediatek MT6750T chip, with an 1.45GHz Octa-core CPU and a Mali-T860 MP2 GPU. It is available with 3GB RAM and 32GB of internal storage, though as mentioned, this can be expanded up to 64GB with a memory card.

These are all standard features and they give a pretty standard performance. The K10000 Pro makes it easy to engage in regular actions such as texting, calls, browsing the internet or playing games.

It does take a little bit longer than we’d like to open some apps and the scrolling can seem a bit slow, but you won’t get the impression that it is underperforming.

The benchmark results confirm that the phone is far from being a flagship, but it performs accordingly as a solid budget phone:

The screen resolution is full-HD, with 1920×1080 pixels. You will be able to enjoy YouTube videos with sharp colours and adequate brightness. But the K10000 Pro has only one loudspeaker, which is clearly one of the phone’s down sides as the audio quality is poor. However, it’s nothing a Bluetooth speaker wouldn’t fix.

The rear and front cameras are respectively 13Mp and 5Mp. The front camera is far from extraordinary, but should be enough to satisfy your basic selfie needs.

The 13Mp camera manages to take decent pictures in well-lit environment, but struggles to adjust to multiple light sources. It also underperforms in darker settings and obviously, at night.

The HDR mode is a let-down as it takes a really long time to take a picture and the results aren’t great. 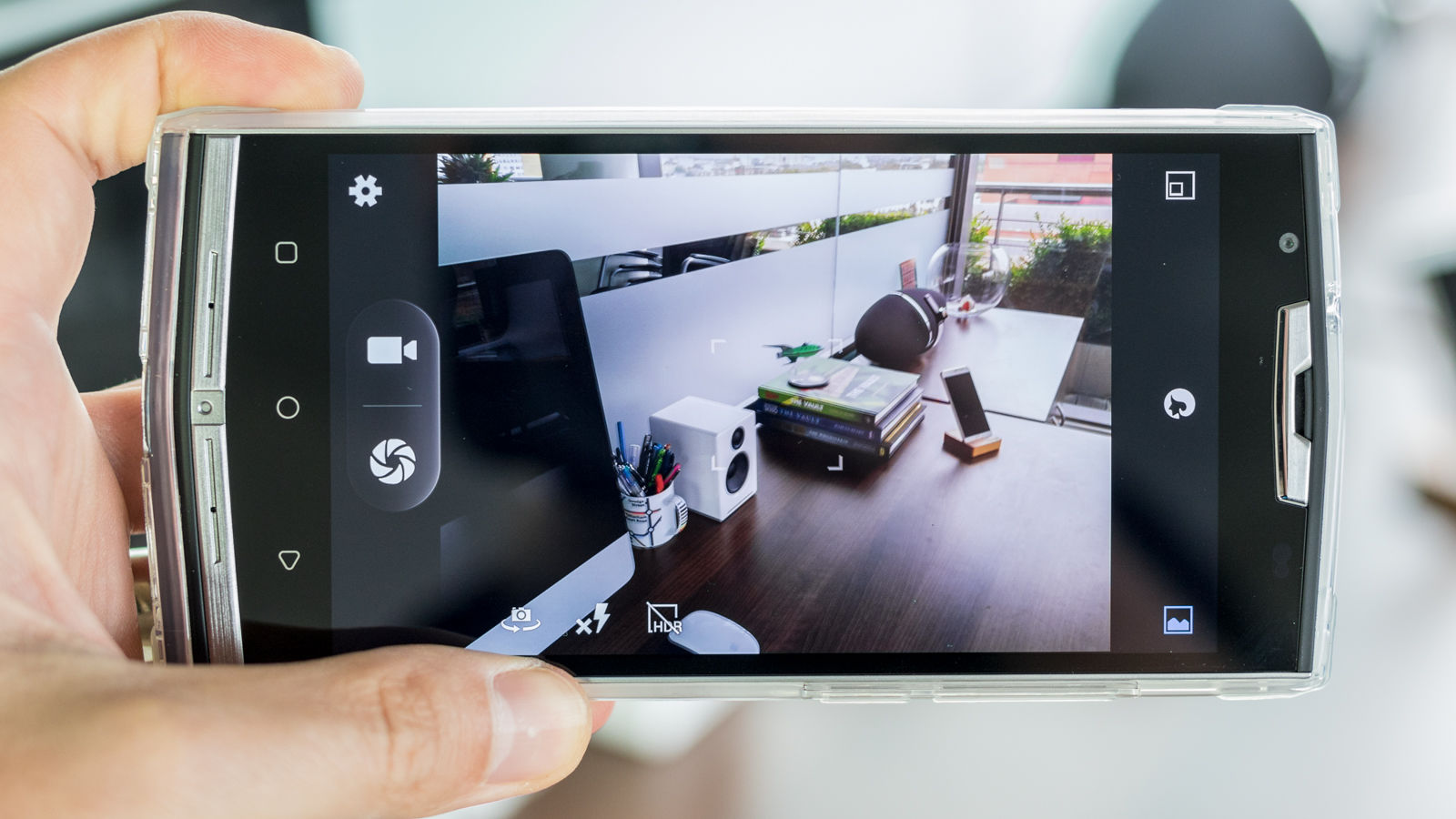 But the phone does have a couple of interesting other modes such as the ‘intelligent beauty’ or ‘smile’ modes, and it also enables panoramic photos.

If you’re looking to impress your friends with some great shots, it might be worth investing in a phone with better cameras. If not, the K10000 Pro will definitely allow you to take standard pictures, which may even look great in good lighting.

It’s clear that the K10000 Pro’s best feature is, by far, its battery. Equipped with a 10,000mAh battery, it will last for as long as 33 days on 4G standby, according to the company. Even with excessive use (including Netflix, games, texts, calls and browsing), the phone will last up to five days before you’ll need to charge it.

This makes the K10000 Pro an ideal phone for anyone who travels a lot, enjoys excessive phone use or regularly forgets their chargers. The battery is so powerful you could even use it as a power bank to charge other devices – an OTG cable is supplied in the box.

Because of its size, the battery does take a little longer than average to charge (expect around 20 hours with a regular charger for a full battery) so it is definitely worth investing in a fast charger, which will allow you to have a fully charged phone in under five hours. If you choose not to, it won’t be that much of an inconvenience as a couple hours of charging will last for around two days, depending on usage.

You should also note that you will always need to use the supplied cable to charge your phone, because the USB port is further inside compared to other devices. Because of this, any other cable tested was too short to charge the K10000 Pro. It’s not a major down side, because with such a powerful battery it’s unlikely your phone will die unexpectedly, but it’s definitely something to remember.

The K10000 Pro ships with Android Nougat and comes with a pretty standard software design.The app menu is accessed by pressing the round-shaped white button. It looks a little unusual as the apps are arranged alphabetically.

The app display is similar to what Android users are used to and the commands don’t present any particular changes, except for the touch buttons, which are in a reversed order: press the left one to access the recently used apps, the middle one to return to the home screen and the right one to go back. 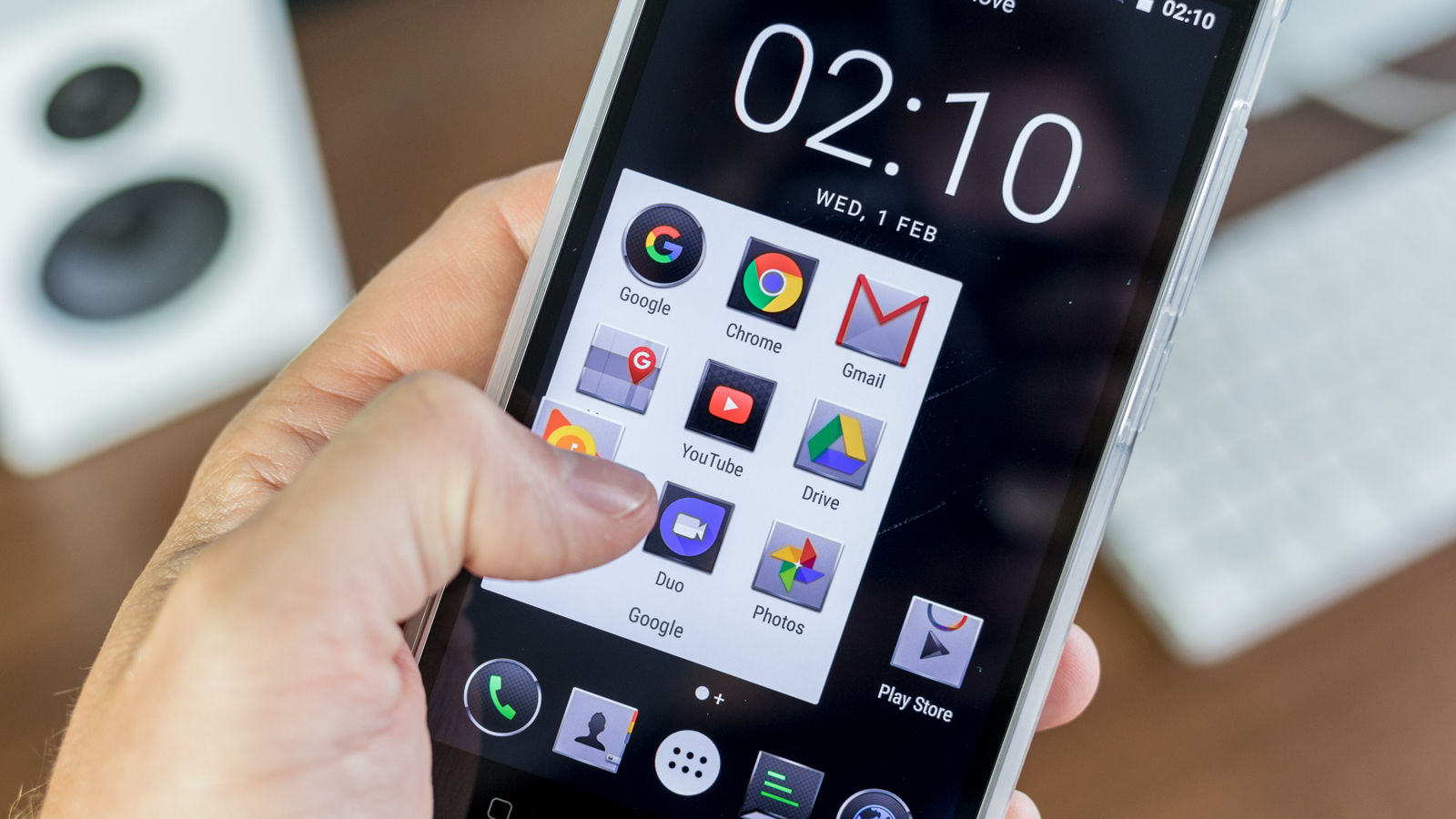 The usual apps are included, plus a shortcut to Oukitel’s webpage but it can be deleted. You also get several interesting features in the Settings menu, like Smart somatosensory or Gesture unlock, which enables you to match gestures with commands.

The icon set is inconsistent (some icons are square, some are round and some neither) but this can easily be changed by modifying the theme (through the Theme app). Overall, the K10000 Pro does not present any challenge to regular Android users, nor does it lack any major feature.