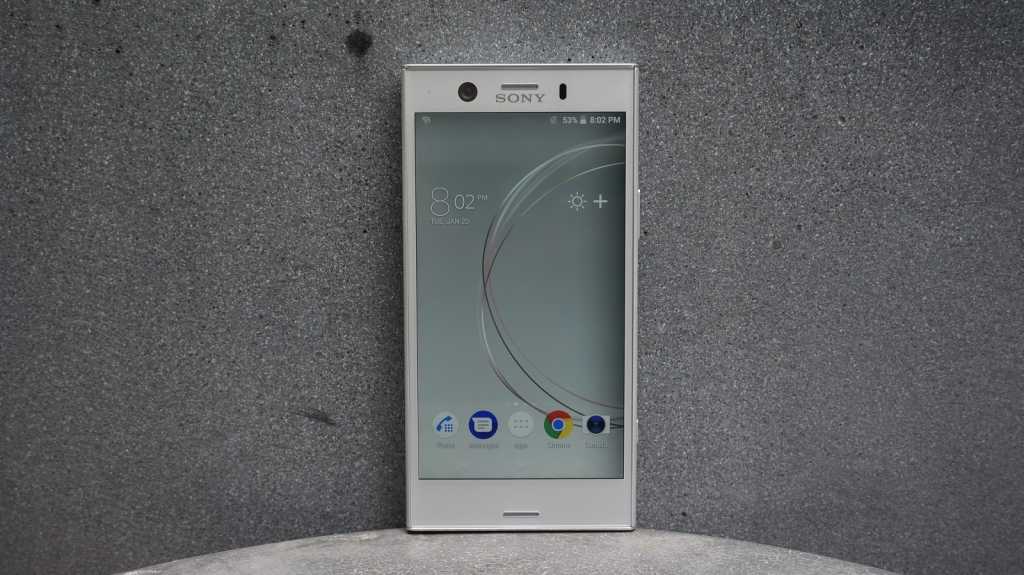 There might not be any one thing that’s overly exciting about the new XZ1 phones. However, the Compact model is particularly attractive and almost unique in the Android market. It provides top-notch specs in a smaller package and includes waterproofing again. It’s actually more powerful than its bigger brother thanks to the 720p screen and has the same camera making it a great choice for those wanting a smaller phone.

At this year’s IFA technology show, Sony unveiled a trio of new smartphones. There are no new top-level flagships but we’re still interested in the Xperia XZ1 and this, its smaller brother. Here’s our in-depth Sony Xperia XZ1 Compact review.

This being part of Sony’s XZ range needs more explaining than when it was simply the Z followed by a number. The XZ1 is a refresh of the XZ but doesn’t replace the XZ Premium, meanwhile the XZ1 Compact is a replacement for the X Compact.

There’s nothing mind blowing about the two new Xperia phones but this model sees Sony continue the ‘mini’ option, which many of its rivals are no longer doing.

The Sony Xperia XZ1 is available to buy now via Carphone Warehouse and Sony’s store at £499.

That will save you £100 compared to the larger Xperia XZ1, if you don’t mind not having a Full HD screen with HDR.

It’s one of the more affordable flagship phones on the market but the price has jumped somewhat compared to its predecessor which was £379 at launch.

Not much has changed about the design of the XZ1 Compact when compared to the X Compact, or even the Z5 Compact really. Sony has its design language and is sticking to it.

Once again, the idea of the phone is that it’s smaller in size to make it more usable for those who don’t want or can’t handle a larger handset. The drawback here is that it still remains a chunky little number at 9.3mm and only just over 10g lighter than the XZ1.

That won’t be a huge problem for most as it will be a small sacrifice to pay to get a smaller phone with high-end specs.

Like the larger Xperia XZ1, the compact model has a uni-body chassis with Sony’s Loop Surface design. This time it’s not made of metal though. Instead it’s a glass fibre and plastic composite but it feels nice to the touch and you wouldn’t really know it wasn’t metal.

At the front there’s 2.5D Gorilla Glass 5 and there are diamond cut edges. However, some still chunky bezels don’t help it look particularly modern.

We’re pleased to report that Sony has brought waterproofing back to the Compact range so the phone has an IP65/68 rating so it can be fully submersed in fresh water without worry.

The XZ1 Compact will be available in a range of colours with harmonised h.ear headphones available. The colours are White Silver, Black, Horizon Blue and Twilight Pink.

You can see the White Silver model in the photos which actually looks a bit grey a lot of the time.

A small design quibble is that although the microSD card slot is easily accessible with a tray, the SIM card isn’t part of it. It might not need a removal tool but is fiddly to get out and it’s hard to know if you’ve slotted it in correctly. It should really be part of the tray.

The XZ1 Compact is a tasty upgrade to its predecessor and on the whole, has the same hardware as the larger XZ1 inside a smaller shell.

The display is smaller, of course, and is still Sony’s preferred 4.6in – the XZ1 is 5.2in – and also remains as HD resolution (720×1280) which is a shame. We would have liked a bump to Full HD which is initially what Sony told us it was.

It doesn’t have the HDR support of the XZ1 either, but this is only used when you’re watching certain content on Amazon Prime Video and Netflix so is hardly the end of the world.

You’re buying it for the size really and the 4.6in diagonal means it’s an easy phone to use one-handed unlike most new handsets.

Like the XZ1, the Compact model has a Qualcomm Snapdragon 835 processor which is still the flagship chip and there’s also 4GB of RAM. Both are decent upgrades compared to the X Compact.

The only different is that storage is 32GB where you’ll get double that on the XZ1. That’s one reason it’s £100 cheaper but there’s still a microSD card slot though so you can easily add more.

With a smaller screen and no HDR, the XZ1 Compact is actually more powerful than its big brother. As you can see in the benchmarks below, it outpaces the more expensive model especially when in comes to graphics tests.

In fact, it almost hit the peak 60fps in all four GFX benchmarks which is up there with the iPhone 7. We’ve never seen a framerate of 50fps in Car Chase, the hardest test.

As good as the results are, it’s worth noting that the OnePlus 5 puts in an excellent performance and costs less. As does the Honor 9.

The XZ1 Compact has essentially the same features as the larger model looking at other specs. There’s still USB-C, NFC and the usual wireless bits and pieces. It is Cat 15 instead of Cat 16 for LTE but users are unlikely to notice a difference in the real world.

It’s good to see a continuation of the fingerprint scanner inside the power button. It’s convenient and also very fast. However, remember that it won’t work if your finger is wet.

It’s good to see that Sony also continues to push audio as a selling point.

There’s a headphone jack which is a good start plus features like stereo speakers, aptX Bluetooth, High-Res support, an LDAC and more. Overall, it’s more than you get on a lot of rivals so could be a deal breaker if you’re considering some cheaper alternatives.

Photography is probably more important than audio for most smartphone users and this is an even bigger selling point for Sony. The firm is one of the only to offer a dedicated camera/shutter button.

You might expect the Compact to have a lower-spec camera compared to the XZ1 but it’s exactly the same. The resolution may have dropped from previous devices but the 19Mp rear camera has larger pixels so can perform better in low light.

The XZ1 Compact gets the super slow motion feature of the XZ Premium which allows you to shoot at 960fps, more than any rival phone. It’s just not the easiest thing to use depending on what you’re filming as you can only film at that framerate for one second.

Other new features include the handy Smile Shutter and Predictive Capture which will help you avoid missing a moment by taking photos before you hit the button. We also like the Autofocus Burst mode which can shoot 10 photos per second while keeping the subject in focus.

As we found with the XZ Premium in our best phone camera test, the camera is a joy to use and with the Superior Auto mode will take decent shots in a wide range of conditions. You’ll have to switch to manual mode for HDR which is a bit annoying though.

There are better cameras on phones out there, and many will want dual cameras now, but the Xperia XZ1 Compact offers solid all-round performance at a reasonable price. Check out our daylight (a bit duller than usual thanks to the weather) and low light samples below.

Sony is making a big deal of 3D scanning for the XZ1 and XZ1 Compact, although this is more a software feature. It means you can use the camera to create 3D scans of objects or people then share them, use them as live wallpaper or even get them 3D printed.

It might sound exciting but we’ve found it to be pretty gimmicky and can’t imagine many people using this more than a few times just for fun.

The front camera is a little different to the larger XZ1 and is designed to appeal to a market of users who take selfies. The camera is 8Mp – compared to 13Mp – and has a 120 degree wide-angle lens so you can fit lots of people in the frame. You can use it in a non-wide mode but this means you’ll get a lower quality 3Mp crop.

Somehow, Sony has managed to put the same size battery in the XZ1 Compact as the bigger model. This means it has a 2700mAh battery, the same as the X Compact and the larger XZ1.

Sony has stopped claiming a two-day battery life for its phone but now says you’ll get all-day usages for the lifespan of the phone. There’s no wireless charging but you can utilise the reversible USB-C port and Quick Charge 3.0.

The battery life of the Xperia XZ1 Compact isn’t anything outstanding. It should last most users a full day of ‘normal’ usage.

The XZ1 and XZ1 Compact are two of the first phones to come pre-loaded with the latest version of Android which is 8.0 Oreo. With late September delivery, it will arrive ahead of Google’s new Pixel 2 phones.

Although Oreo is a new version number, it’s nothing like an overhaul of the operating system. Instead, it brings various improvements and a few new features.

Google is touting better boot times, battery life, auto-fill logins and there’s a new picture-in-picture feature, too. The latter means you can carry on with things like a video chat while using other apps, so you could check your calendar.

Sony’s version of Android is still close to stock while remaining recognisable. Sony doesn’t mess around with core elements while adding value with wallpapers, widgets and its own apps including Walkman and PS4 Remote Play.

The Google sidebar is a swipe away from the homescreen and the Google Assistant is built in. Both good, but there are a few too many pre-loaded apps from third parties for our liking.

These include Facebook, Spotify, Kobo, AVG and a few from Amazon – all of which can only be disabled, not uninstalled.