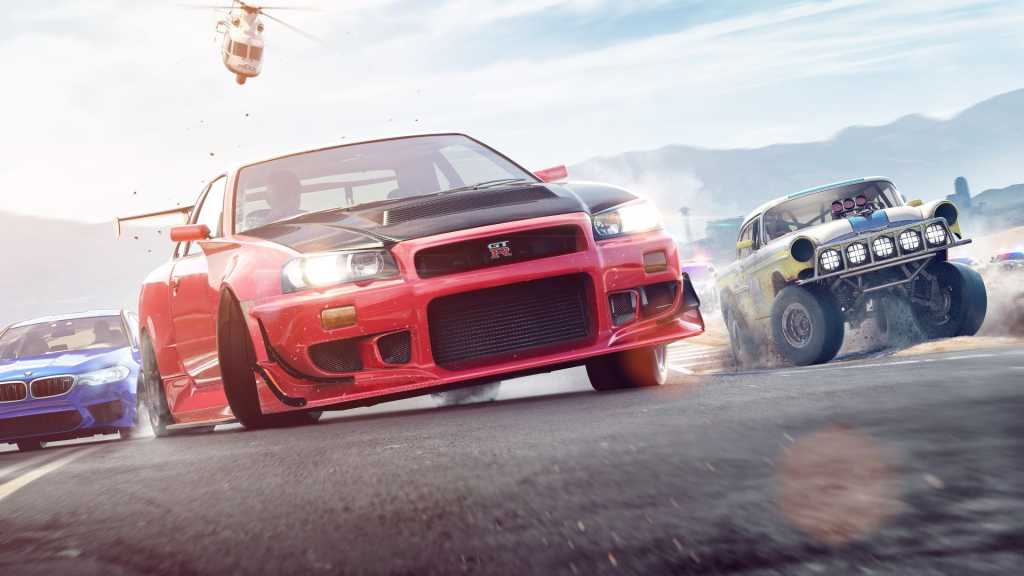 The racing in Need for Speed Payback is fun. The open world is a decent size without being so huge it gets annoying. The visuals are great, even if the scenery itself is a little bit forgettable. And there are the outright bad bits: the awful upgrade system and the time-limited police chases. Ultimately, there’s nothing outstanding or innovative enough here: it feels too much like the designers took a bunch of features from other racing games, threw them all into Payback and added a few Hollywood action sequences.

The beloved driving series Need for Speed is back after a year off with Payback, It’s a new adventure which adds Hollywood action sequences into the mix. It’s open world, but introduces something fans haven’t seen before in NFS: off-road driving.

Note: There’s now a newer entrant in the franchise: Need for Speed Heat.

Need for Speed Payback is now available to buy on PS4, Xbox One and PC, too.

You can buy the game directly from EA and choose from the standard or deluxe edition, with the latter offering bonuses including a story mission pack and a 10 percent discount on in-game purchases.

If you wanted to buy the game from somewhere else, you can pick up the standard (£59.99) and deluxe (£79.99) PC variants from the Microsoft Store. Console users should head to GAME, as it’s selling the standard edition cheaper than EA itself, at £49.99.

The first thing you notice is the level of detail in the cars. Tyres have authentic-looking markings, and the rust and faded paint on your first car as well as the two ‘derelict’ cars you can find around the map look stunning.

Many modern driving games plough a lot of time into the car models, making sure they’re as accurate and life-like as possible, and neglect the scenery. Payback has its flaws, but this certainly isn’t one of them, as the views outside the car are almost as attractive as the variety available. 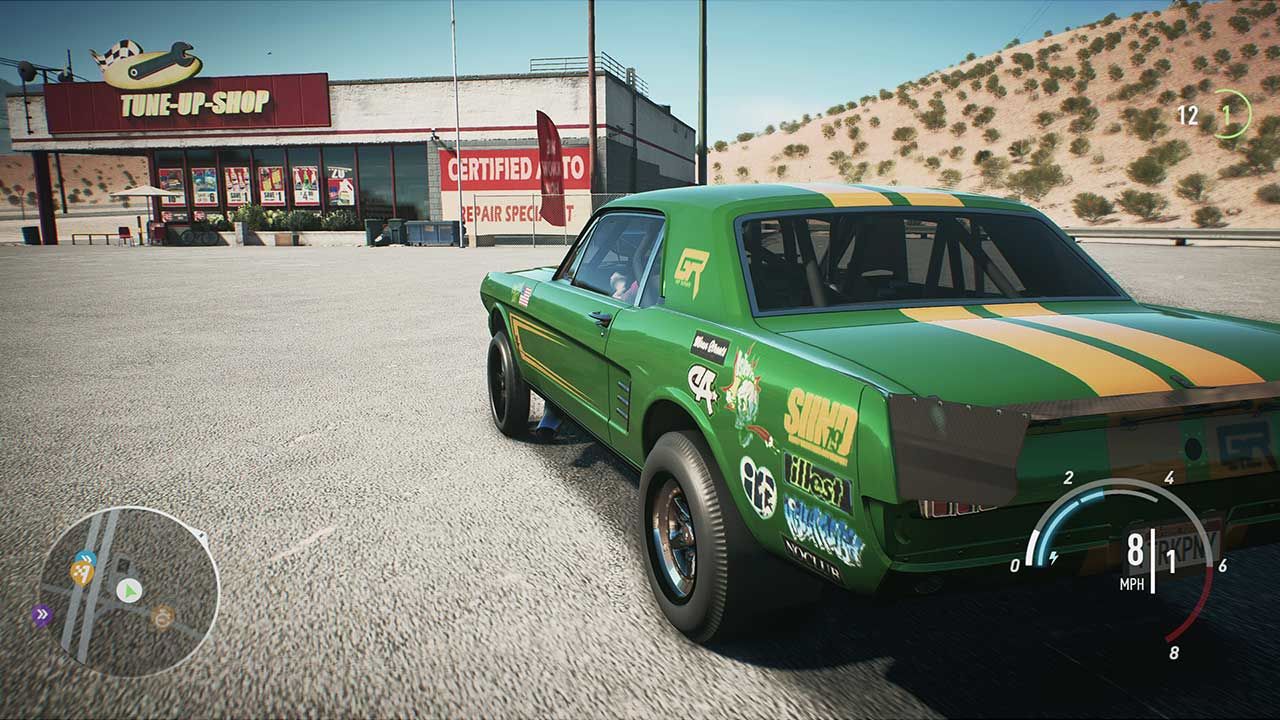 The long draw distances mean you get some gorgeous vistas (which change depending on time of day and weather) but it’s nothing you won’t have seen before in other games such as The Crew or GTA Online.

Payback is set in the fictional Fortune Valley which, as with its real-life counterpart Los Vegas, is surrounded by desert and mountains. The game offers an expansive open world with a range of races, missions, challenges and other events in which to participate.

Blockbuster missions are the main addition to Need for Speed Payback, and offer what EA calls an ‘action driving’ experience akin to what you see in Hollywood films. They’re high profile, adrenaline-inducing missions undertaken by multiple members of your in-game team. 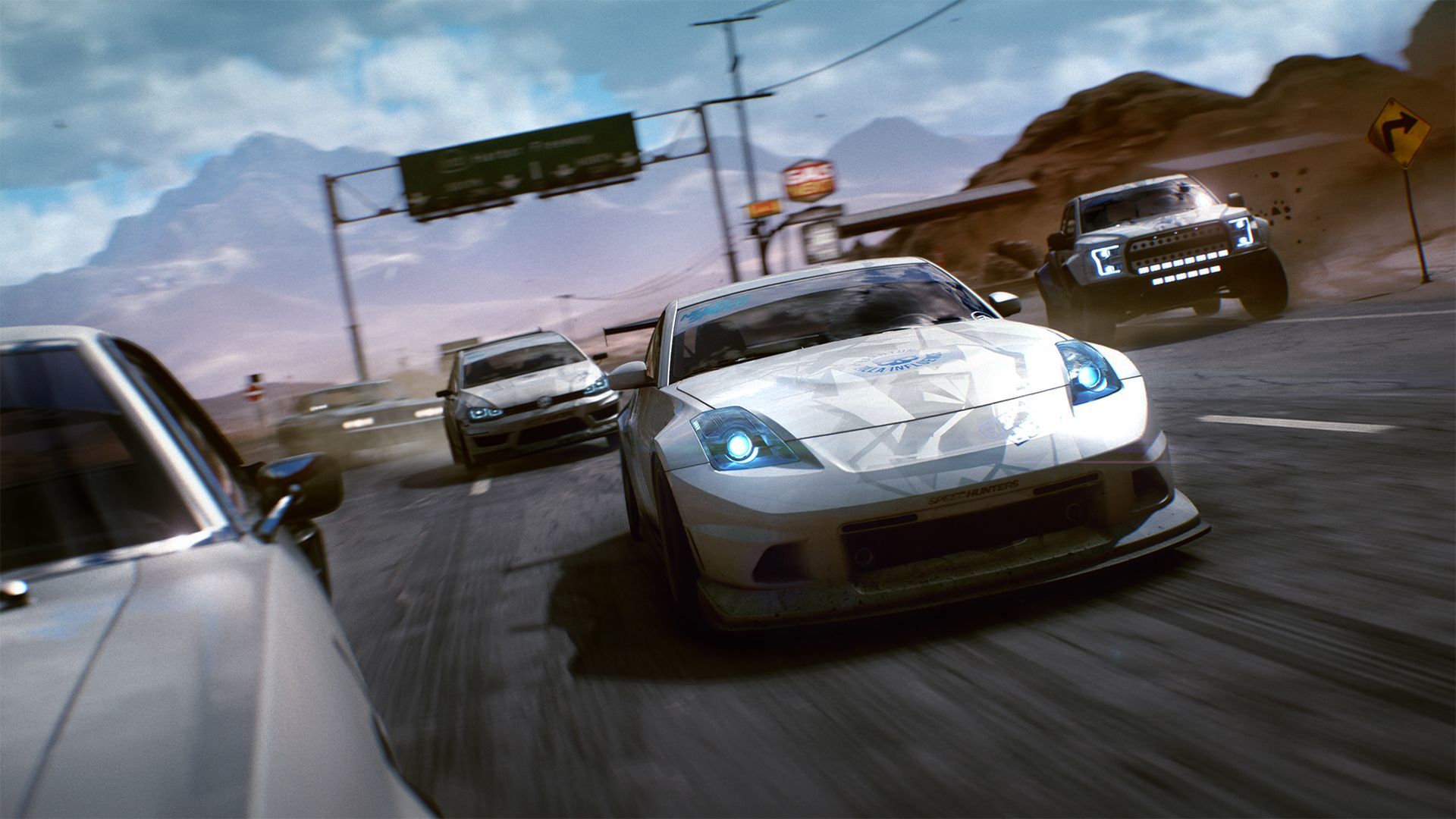 The story is no less contrived than any previous NFS title, with the three main protagonists being double-crossed at the outset as you complete your first Blockbuster mission. Payback, then, is the reason for racing – and beating – the various racing crews around Fortune Valley: after you’ve mastered the disciplines (point-to-point road racing, off-road racing, drag racing, drifting and escaping from the cops) you’ll finally get the chance to exact your revenge on Lina.

After the first few point-to-points and races you start the game proper and choose a car. This becomes the car you’ll upgrade to compete in the main road races, but you’ll need to buy or acquire others along the way which are specific to each type of race.

It harks back to the gold old Need for Speed Underground days where you could take a car from stock and add a turbo and other go-faster goodies, as well as tricking it out with fancy paint, wheels, spoilers, body kits and crazy lighting.

It’s much the same in Payback, except that your main upgrade path is by winning ‘speed cards’ when you come first in a race (or manage to reach the escape point when being chased by the cops). 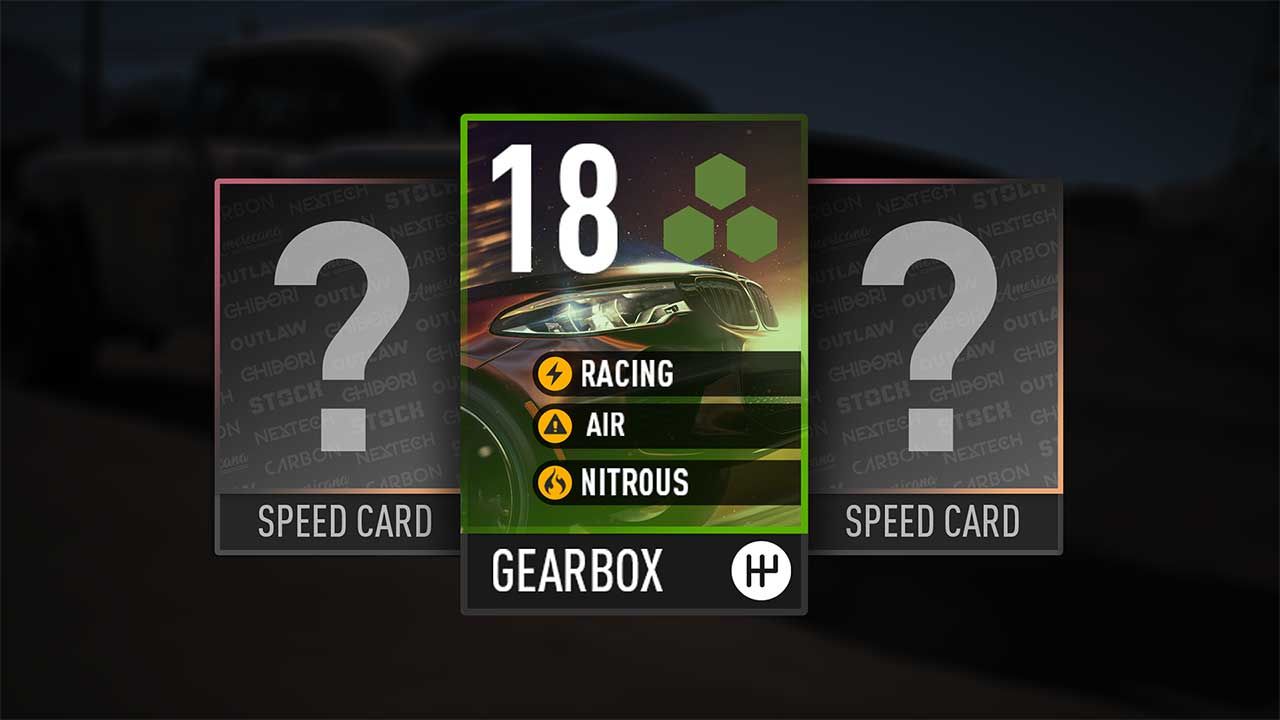 Rather than pimping out the car at your garage (a facility that is also available!) you’re presented with three random cards upon winning a race. Each card represents a random car upgrade, and it’s down to you to pick one.

Once the upgrade has been revealed, you can see what effect it’ll have on your car (it could be an upgrade or a downgrade) and you have the choice to apply the upgrade instantly to the current, sell it for cash or send it to your garage so you can decide later.

The overall effect of these upgrades is that your car increases in level. Each race has a recommended level, and although you can win if yours is slightly below it, no amount of skilful driving will let you beat other cars which are a significantly higher level.

Aside from the random aspect, which is frustrating compared to choosing your own upgrades, there’s a problem here as you’ll struggle to upgrade your car enough to win the next race without repeating previous ones to get more speed cards and it can feel too grindy at times.

This is exacerbated by the fact that you can’t do any visual upgrades to your car, except for paint or a wrap, until you’ve unlocked each one by completing certain challenges.

Also, there’s a bizarre system where you can turn your unwanted speed cards into a tokens: get three and you can spin something like a one-arm bandit slot machine for a chance of a better part. 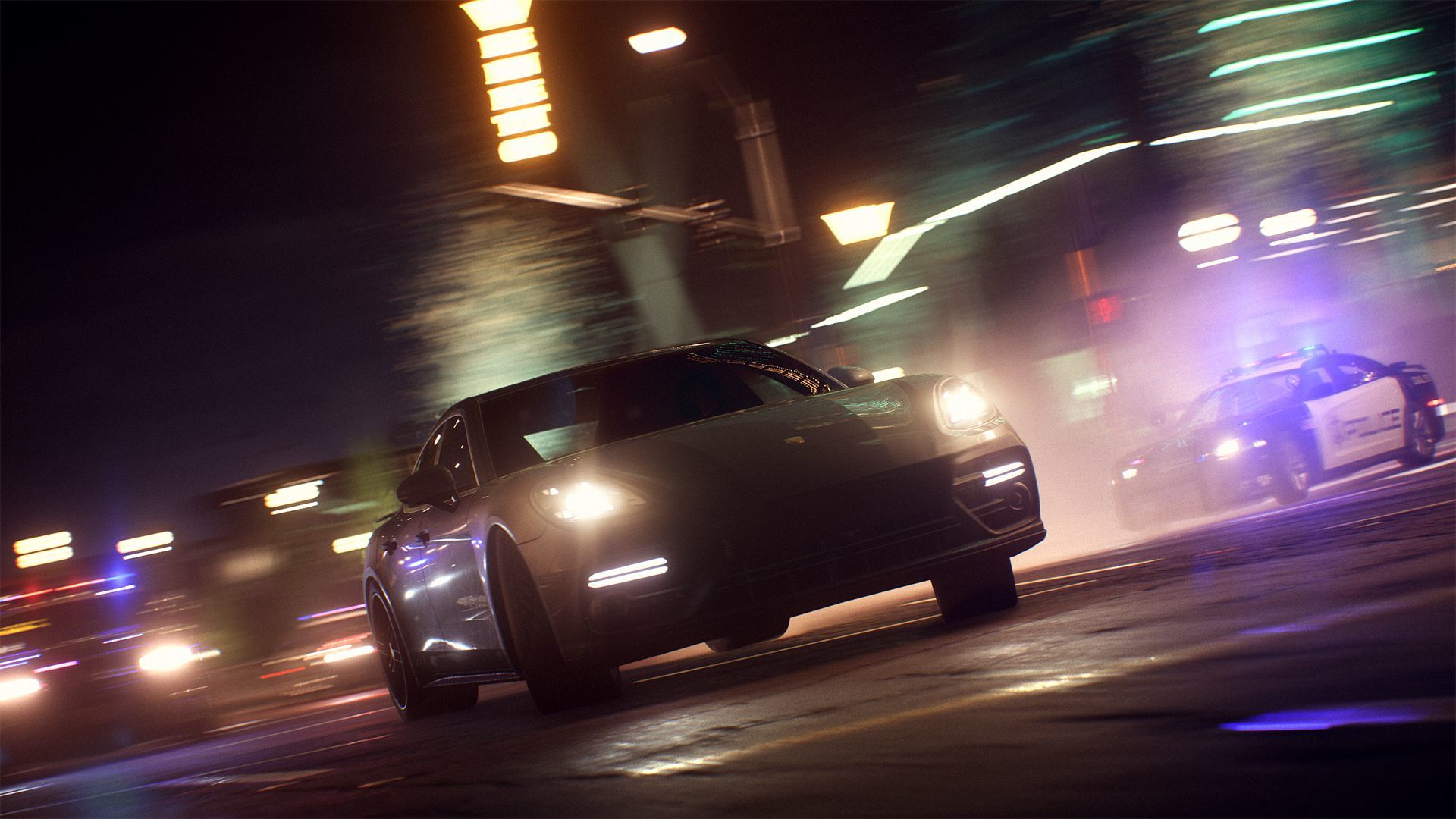 There are several currencies in the game. You’ll earn money for doing well in races, which you can use to buy cars and upgrades. There’s also your Rep level – increase this and you’ll get ‘shipments’ which contain parts, money and ‘vanity items’ such as coloured tyre smoke or nitrous boost and lighting.

You can buy premium shipments which contain more of these items. Essentially it’s a pay-to-win scheme which, combined with the messy upgrade system, means that upgrading is more confusing than fun.

Once you’ve beaten the first two racing leagues, you get to play the first blockbuster mission. It’s here that control mechanism from the very first mission is reinforced: you don’t get to drive for the entire time.

You’ll be in control right up to the point where the game takes over and makes you a spectator for the most exciting parts – such as when one of your crew members jumps from your moving car to a truck as you speed along on the wrong side of the road.

It looks good, but the sequences are fairly short and, really, they’re not demanding enough.

As in other open-world driving games (think Forza Horizon and The Crew) there are various distractions and collectables dotted around the landscape to keep you entertained as you drive from place to place.

There are speed traps, average speed runs, jumps and billboards to jump through. There are 100 casino chips to find, plus two classic cars which (exactly like Hot Rods in The Crew) you can’t drive until you’ve hunted down their various parts.

The locations of these two ‘derelicts’ (a 1960’s Mustang and a Nissan 240Z) tend to inaccessible without completing a jump, but there’s a radar when you’re nearby to help you find them.

There are other facets to alleviate any potential boredom: daily challenges and Autolog. The former consists of four challenges which – if completed – reward you with a shipment. With Autolog, you’re pitted against other player (or your friends) to see who can finish races in the quickest time, get the most air on a jump or the fastest speed through a trap. 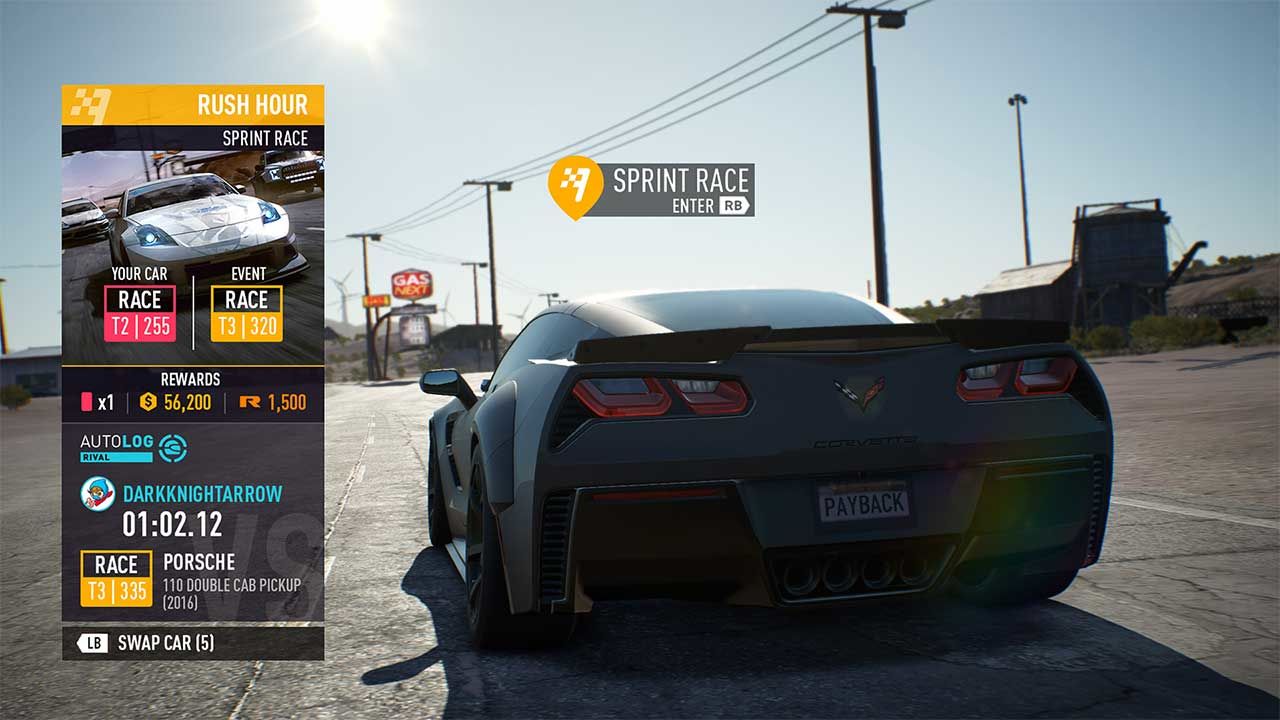 And Speedlists matchmake you against drivers of a similar level or car performance for a series of five events, on and off-road. In total there are 42 multiplayer events at launch.

You’ll also find roaming racers speeding around the open world: these aren’t other real-life players but in-game AI which you can race while in free roam mode. And there are ‘bait crates’ for triggering cop chases.

So what’s it actually like racing in NFS Payback? Well, it’s a lot like you’d expect. It’s much more arcade-y than Forza 7, Project CARS 2 or Gran Tourismo, and that’s fine: this isn’t meant to be a simulation or a serious racer.

It’s basically a mash-up of GTA, The Crew and Burnout. There’s rarely a need to release your grip on the throttle to brake: usually you’ll be after extra speed from your tank of nitrous oxide. Strangely, though, aside from the motion blur when using NOS, you never feel like you’re travelling as fast as the speedo says you are.

Partly, that’s down to camera view: this is very much a third-person flying-behind-the-car game: there’s no in-car view. You get the best sense of speed by using the bumper or bonnet cams, but then you don’t get to see your lovingly customised car – or your beaten up, rusty derelict.

We’ve no complaints on the audio side: Payback sounds great. It’s even realistic, too, with the lovely howling of the Nissan 350Z’s V6 and the frenetic buzzing of the Honda S2000’s free-revving four-pot sounding just like they do in real life.

Getting back to the racing, off-road is fun. Once you’ve adjusted to the game’s handling and physics, you’re only limited by the rocky areas which are effectively out of bounds: you can’t drive over anything you can see, but you don’t feel boxed in often.

In fact, more often than not, you’ll find little shortcuts that can shave a couple of seconds off your time and let you catch up or extend your lead.

You can adjust the difficulty between easy, medium and hard at any time (except during races) and there’s a catch-up mechanic that lets you speed back to the pack if you crash into an unmovable object such as a tree. Plus, you can slipstream to get past rivals when you’re close enough behind them.

For the most part, everything is destructible so fences, lamp posts and most other roadside objects won’t really slow you down. Even smashing head-on into concrete police barriers won’t affect the performance of your car even if it will stop you dead: you just reverse and carry on around it.

Drifting is also pretty easy once you’ve got the hang of it, and drag races are merely about timing those gear changes perfectly.

The new-style cop chases aren’t nearly as good as the adrenaline-inducing escaped in Need for Speed Most Wanted or even those from the last NFS. Instead of being able to swerve, duck and cover, you’re forced along a linear route (like a race) and if you make it to the end before the time limit, that’s it. And there are no police around in free roam at all, which you might see as a benefit.