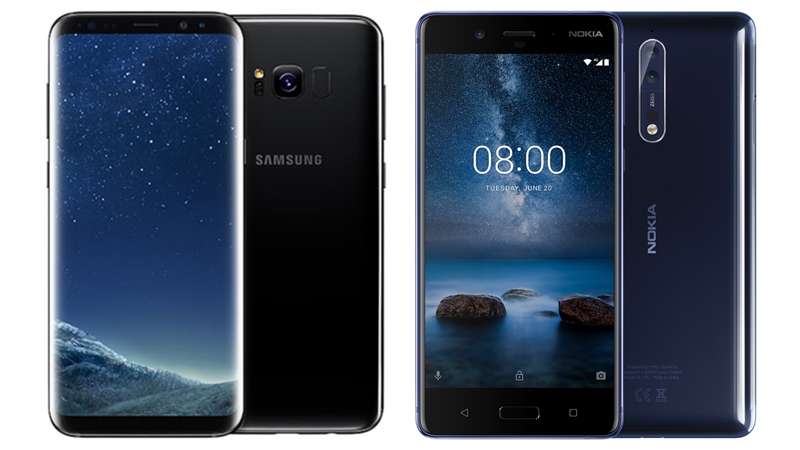 With the two now coming in at much the same price Samsung is the clear winner in this pairing. Though the Nokia 8 boasts a dual-camera, Samsung’s single-lens offering is fantastic in its own right. Core hardware is similar, but Samsung wins on design – especially with its gorgeous Infinity Display. Unless you are a content creator who will make great use of Ozo and the Dual-Sight Zeiss cameras, we can’t see why you would choose the Nokia 8 over the Galaxy S8.

Nokia has unveiled its highly anticipated Nokia 8, an Android phone with a flagship specification. We see how it compares to the current king of the Android market, the Galaxy S8.

The Nokia 8 is a decent phone built for content creators. It stands out for its Carl Zeiss dual rear cameras and 13Mp selfie camera that can be combined in a new ‘Bothie’ mode to capture the full picture, and for its Dual-Sight streaming capabilities and Ozo spatial audio recording.

It matches the Galaxy S8 on core specifications, and Nokia promises timely updates to its vanilla Android operating system. But in other respects the Nokia 8 does little to stand out in the crowded market.

Samsung, meanwhile, is the master of bells and whistles. Though its flagship might not feature a dual-camera (that is tipped for the upcoming Note 8), it does have one of the best phone cameras on the market.

The Galaxy S8 has fancy extras such as wireless charging, an always-on display, an iris scanner and a heart-rate scanner, and though it’s not plain Android the firm’s Touchwiz UI is no longer the resource hog it once was, now focusing purely on useful extras – including the Bixby AI assistant, though we’ve yet to experience its full potential in the UK.

And Samsung has perfected the S-series design with a combination of waterproofing (the Nokia 8 is merely splashproof), tough glass, dual-curved edges, and a virtually full-screen Infinity Display that is a sign of things to come in the smartphone market.

The screen technology itself has the edge, with Samsung specifying AMOLED in place of Nokia’s IPS, offering (in our opinion) more satisfying and vibrant saturated colours and richer contrast. It’s also brighter, though the Nokia 8 is very impressive at 700 nits.

The minimal bezels also give it a sleek appearance that the still-pretty 6000-series aluminium Nokia has no chance of matching, thanks to its decision to retain the home button (though this does mean the fingerprint scanner is in a more user-friendly position). In design the Galaxy S8 is the clear winner in this pairing.

Though the Galaxy S8 was by far the more expensive of the two when it went on sale in April, the price has now fallen such that it may even be a few pounds cheaper than the Nokia 8 when it goes on sale in September.

We’ve compared the key specifications of each of these phones in the table below to help you form a purchasing decision.