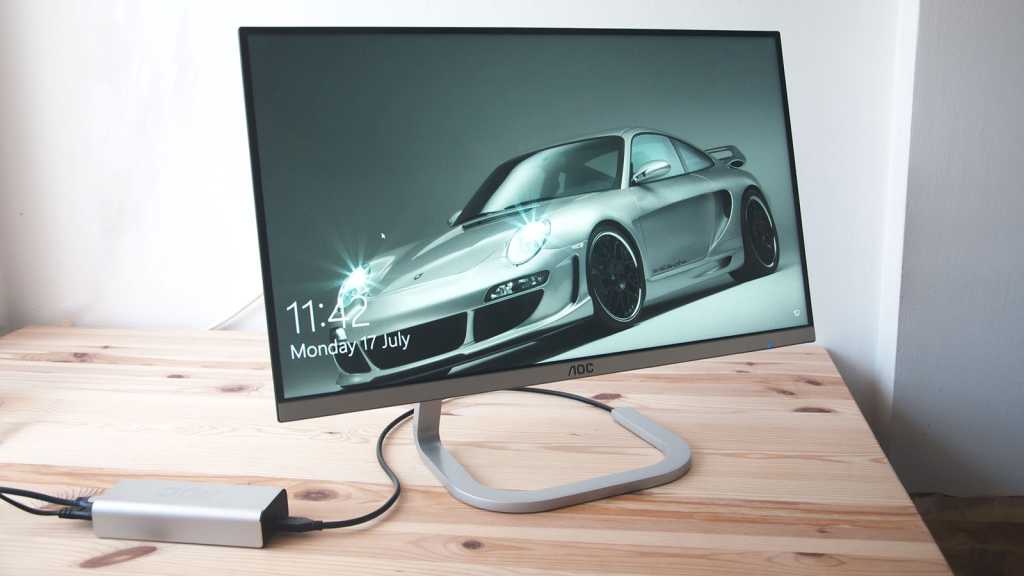 Using a standard HDMI mini connector in a proprietary fashion is a rookie mistake for AOC, even if it provides a clever means to declutter the computer to screen connection. Looking beyond that foible, this is an effective screen for those that don’t want or need greater than 1080p resolution but do like technology to look like it was designed and not just specified.

Recently AOC unveiled a new range of monitors that it had worked on with the legendary Studio F. A. Porsche. For those unfamiliar with Ferdinand Alexander Porsche, he was the grandson of Ferdinand Porsche, who designed the Volkswagen Beetle, and he’s personally famous for styling the Porsche 911 among other automotive classics.

Sadly, F.A. Porsche passed away in 2012, but the company that carries his family name renamed Porsche Design Studio to Studio F. A. Porsche in his honour. This part of the larger Porsche SE group has designed all manner of hardware that’s not automotive, including luggage, metro transport systems, watches, sporting equipment, kitchen knives, a Huawei phone and even a Windows laptop.

The AOC PDS241 and its PDS271 brother are the first fruits of their collusion with AOC, and it’s fascinating to see what designers from outside the consumer electronics sector can contribute to it.

At £193 from Amazon, the AOC PDS241 isn’t the cheapest 24in monitor you can buy, but it’s also managed to avoid a hugely inflated price because of the Porsche name.

You can check out our list of the best monitors for alternatives.

Given that the exact specifications of the screen aren’t something that Studio F. A. Porsche can alter their alternative start point was obviously the support stand. As with many stylish variations on supporting a screen, the one used on the PDS241 precludes a VESA mount, as the spiral foot is permanently attached.

It also only tilts -5 and 23 degrees respectively, with no twisting or rotation possible.

That might seem like a retrograde step, but where this design diverges from almost every previously design is how it’s connected to both the power and video input through a single cable.

The single HDMI input is on the laptop scale power supply, and a single cable carries that and the power needed to drive the screen in what looks like a single mini HDMI cable on the open end of the support foot.

According to Henning Rieseler, Head of Studio F. A. Porsche Berlin. “The expressive shape of the monitor stand emphasises the simple idea of integrating the cables into the stand. The form not only follows the function but celebrates it through its asymmetrical shape in an elegant and sophisticated way.”

To deliver this vision, AOC used the Mini HDMI connectors. As a general rule, power isn’t meant to travel over HDMI and in the manual are warnings that bad things will happen if you ever plugged it into any other device with a size-compatible input.

In the manual AOC calls it the ‘communications cable’, and being only 70cm long you are forced to leave the small PSU on the desktop. That slightly undermines the chic of this design, unfortunately.

As thin profiles go, this design takes that black art to a whole new level. At just 5.2 mm this is an incredibly skinny panel that is almost borderless on three sides. Though, in delivering something this svelte profile, compromises were made.

The obvious one is that there is no room for any speakers, though AOC does provide a 3.5mm headphone socket on the underside of the frame.
Some might be tempted to write this design off as a victory for style over substance. But, the PDS241 has many virtues that are impossible to ignore.

The specifications are by modern display standards are modest; 1080p native resolution and just 250 cd/m ² of backlighting.

However, the AOC SuperColor WCG IPS-AH screen (LG manufactured) used in the PDS241 is full of surprises, many of which got revealed once our Datacolor Spider5 colour calibrator aimed its eye-of-Sauron at it.

We certainly weren’t expecting 100 percent of sRGB and 87 percent of Adobe RGB gamut, a colour performance that many screens sold for professional use might consider offering.

The AOC-quoted brightness of 250 cd/m² was marginally optimistic, with 233 cd/m² being generated at the 100 percent setting.

The tone response was also challenging to judge. Because instead of providing an actual gamma value, AOC chose to have three different settings called ‘Gamma 1’, ‘Gamma 2’ and…yes, ‘Gamma3’. The default Gamma 1 setting equated to Gamma 2.1 in our estimation, and the others lower.

There aren’t any colour temperature choices either. Instead you can choose ‘warm’, ‘cool’, ‘normal’, ‘sRGB’ and a user defined value based on three RGB levels. Given the capabilities of the panel, perhaps allowing users to set 6500k or another common value might have been a wise choice.

If this technology has a specific weakness, it’s that the contrast levels aren’t as high as those in the specification, unsurprisingly.

Despite this, these strengths and weaknesses blend well to delivers a punchy, sharp and well-saturated experience that works well in a wide range of scenarios.

The screen clarity has been enhanced by a matt finish that AOC applied to the panel that drastically reduces reflections, making the PDS241 highly appropriate for use in an office environment.

Where this design doesn’t deliver is in the refresh rate available, topping out at 60Hz at the native 1080p resolution. Because of that it probably won’t attract gamers, even if the 4ms (GtG) response time for an IPS panel is more than acceptable. Also, we should point out, this isn’t actually aimed at gamers.

The inclusion of AOC’s Low Blue Light technology and Flicker-Free technology is a hint that they see this product as more business than home orientated, even if these features are now becoming standard.