While difficult at the outset, like many handheld Metroid games before it, Samus Returns is an outstanding and completely engrossing game. It manages to energise an old story while completely reinventing it as a modern yet classic feeling side scroller, though some might feel it doesn’t break any radical new ground (and they’d be right). This will no doubt placate fans who have been hankering after a new 2D Metroid adventure. Once you too get your hands on it, expect many frustratingly gleeful hours spent on SR388. Samus is back. Let’s hope the sequel doesn’t take as long to be made as this one did.

Don’t call it a comeback. Samus was never really gone, and this outstandingly well crafted reimagining of the 1991 Game Boy title Metroid II: Return of Samus can be considered a brand new game despite the similarities.

It lives up to the hype created around its announcement at E3. It’s a game that makes your heart beat fast when a Metroid is flying at you and feels amazingly immersive considering the relatively diminutive screen of the 3DS.

Nintendo has characteristically made sure there is care sprinkled all over the gameplay right from Samus’ first sprint into the darkness by introducing new techniques, helpful abilities and a luscious soundtrack to go with the obviously improved graphics.

From left to right: A Chozo cell, the morph ball ability and the new melee counterattack

When is the game coming out?

The game, out now, is the second 3DS Metroid title after the underwhelming co-op worlds of Federation Forces, and you can order it from Amazon or Nintendo right now.

I am confident that fans will be utterly in love – and there’s plenty for first-time Metroid players to get stuck into as well.

If you’re not familiar, Samus Returns is a remake of the second ever Metroid game, Metroid II: Return of Samus. In the larger canon of Metroid games it doesn’t fall second though, and is in fact closer to the tail end of the chronology.

Yet the strength of the titles has always been the juxtaposition of their instant playability and the fact that you don’t need the backstory. It opens with Samus travelling to the home of the Metroids, SR388, to basically kill ‘em all. The opening cut scenes are gorgeous, with vivid colour and artwork.

The score here too is brilliant – a far cry from the 8-bit bleeps of the Game Boy, this is a game you should play with headphones. The transitions in mood depend heavily on the audio in tandem with the visuals that plunge you into an increasingly hellish world of subterranean alien encounters.

The combination serves well to ramp up your adrenaline as you get used to the melee counterattack, a new move necessary to knock back foes before blasting them. Knocking back an enemy triggers auto-aim, allowing you to instinctively fire off a few rounds.

From left to right: Firing off rounds in a counterattack, using the ice beam, using the charge beam

The move takes some getting used to, and is difficult to get right at first. The classic Metroid frustrations are here; the learning curve levels out after a couple of hours, but it starts very high.

Considering that Metroid II on Game Boy made do with just the D-pad, A and B, the full array of 3DS buttons and touch input was always going to bring more complex controls. Thankfully this also means better gameplay.

A tricky skill to master is the new free aim mode. Holding L lights up the tracer from your gun, and the control pad aims it. It’s accurate, and necessary to complete some specific tasks once you’ve picked up new skills like the ice beam to freeze enemies and use them as platforms, for instance.

You might find yourself cack-handedly trying to do all this while selecting missiles with R, but I have played it out on the New 3DS XL and New 2DS XL in, and neither gave too much hand cramp.

It is hard to remember but the original Game Boy version didn’t have Metroid staples like ledge hanging (first seen on the Game Boy Advance’s Metroid: Fusion), which here serve to propel you deeper into the Metroids’ world.

This isn’t simply a remake; the story of Metroid II is brought even more to life with modern graphics and game engine.

But oh, the gameplay. It’s lush. Silky smooth. However you choose to describe it, the animations are very well done, and SR388 pops out, even if you keep 3D turned off – which I do. With it on, you get some cool depth effects as the backgrounds scroll by but this is still a 2D side scroller at heart and it is all the better for it. There’s going to be a lot of doe-eyed Metroid lovers out there when playing this.

The game unfolds in the usual way, with exploration key to unlocking new areas. Some die hard Metroid fans might balk at the new Scan Pulse ability. Tap A anywhere and Samus emits a blue pulse. This gives you a hint as to where to go next, like which part of floor to bomb or which ledge to scale. 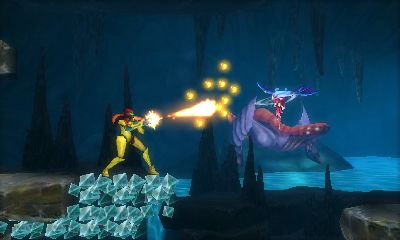 It isn’t cheating per se as often I found it no help and had to solider on as the levels get trickier, but it’s a controversial thing to put into a Metroid game – the series rewards hard brain work over simple hints.

The beauty of the game, much like its predecessors, is in the relative restraint you often have to show in order to succeed. An all guns blazing approach rarely works in a Metroid battle as you fall foul of quicker, more powerful attacks.

The move is also needed against Metroids, all of whom you can only melee counter when certain signs appear. You cannot repel an electric attack, so evasive action is needed.

You’ll have to dodge attacks as normal and then look out for a different white blast as they charge at you, which you can parry and then hit with your missiles. It’s tough at first, but each Metroid in each area takes the same number of hits to defeat, so the difficulty only increases as you enter a new area (following the inventive naming conventions of Area 1, Area 2, etc.).

This gets so much harder as the difficulty increases and the ugly Omega Metroids are introduced. 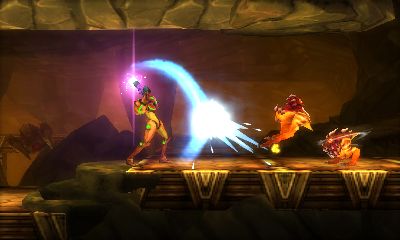 Your suit upgrades along the route and the famous morph ball ability that you pick up allows you to tackle enemies with growing confidence, but early death is to be expected (and something we encountered).

The bottom screen comes into its own here, and manages to help while not interfering with the classic feel of the gameplay. It’s great to have the map at a glance rather than within a start menu, while tapping to change between different gun beams becomes second nature, and is necessary.

It also gives quick access to Aeion abilities that you collect throughout the game, as well as Samus’ familiar suit upgrades. You can also drop pins to remind you where to return, and check a key if you’re not sure what the map is trying to show you.

The game difficulty is on a level in order to please old and new fans alike. It’s not as devilishly hard as some of the older 2D Metroids, but it is long enough to placate that quibble, with well over 20 hours here to get stuck into.

Save points are mercifully well placed, though sometimes retracing your steps after death on SR388 can be frustrating. The 3DS’ second screen is brilliant for quick glances at the map, and the simple additions of tap-to-morph-ball are blissfully uncomplicated.

You can also change beam type by tapping as you gain hidden strengths, but Samus Returns is not afraid to actively encourage backtracking. I like the way retracing steps within the game redefines linearity; the map isn’t that open-world, yet the side-scrolling nature makes you feel like you’re moving over vast areas. Backtracking in this game is not only unavoidable but also integral to success.

With headphones on, the beautiful score carries you along, undulating expertly to alter your mood. It’s amazing, and you’ll quickly forget you’re on a handheld as you get lost in Samus’ new adventure. I even felt the game is easier with headphones off, such is the emotional power the score can have on players at full volume, causing panic and stiff hands when needing to pull off more complex attacks.

As you go you have to activate Chozo Seals, relics of the extinct avian race the Chozo – structures within the game that gain power and unlock more of the map depending on how many Chozo cells you collect from fossilised aliens reminiscent of the Engineers from the Alien series.

We also quickly picked up familiar Metroid powers such as the morph ball and bomb and later spider ball ability for clinging to walls and the charge beam necessary to break through to other areas. The game flows magnificently, and while some puzzles are clearly there to stump and frustrate, the rewards given for exploration are very satisfying. 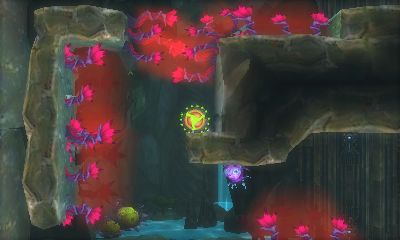