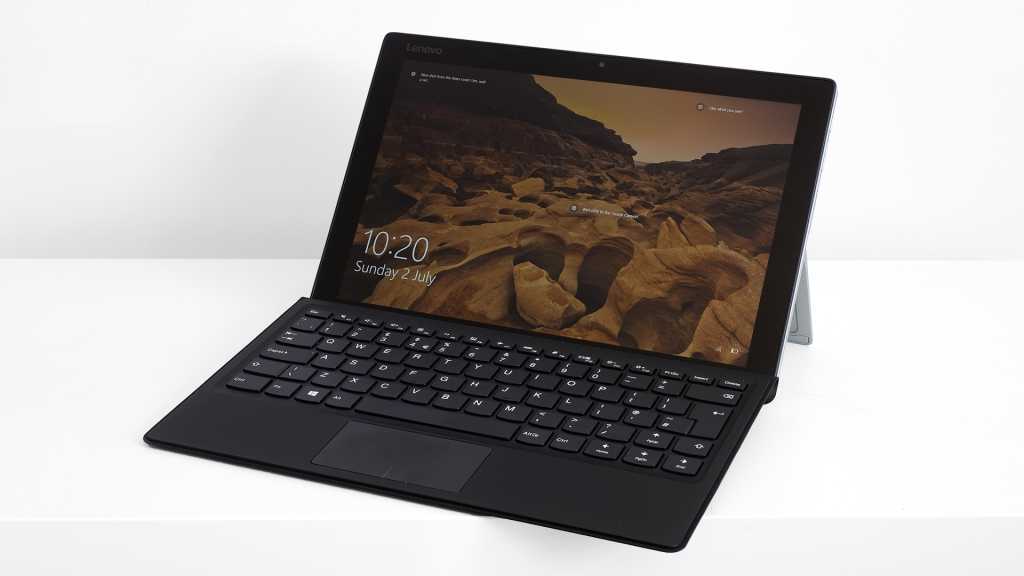 It’s alarming that Lenovo has managed to get quite as close to the Microsoft Surface Pro 4 at half the cost here. High-quality build, a good screen, solid performance and a comfortable keyboard mean there’s nothing to let the side down and make the Lenovo Miix 510 seem cheap or compromised. Not every part is as good as the Surface Pro 4, of course. The Microsoft keyboard is a little stiffer, the screen is much sharper. However, the two laptops have exactly the same functional benefits and the Lenovo Miix 510 is also competitively-priced next to more conventional slim laptops. The main point to mull over is battery life. At 6.5 hours with light tasks, the Lenovo Miix 510 won’t last all day long. Consider that everything is crammed into a 10mm-thick shell and it’s no great surprise, though.

The Lenovo Miix 510 is a Microsoft Surface Pro 4 at half the price. It’s as simple as that.

Its design is a little less impressive, the stylus isn’t as good and the keyboard part has a few niggles, but it’s otherwise a fairly close match for the popular Microsoft hybrid.

This is also a good half-way house between a big tablet and an ultraportable laptop, a solid choice if you’re not going to work on the Lenovo Miix 510 all day, every day. The one part to put some of you off is battery life, which is solid but won’t last for a full day’s work.

Those after something to function as a primary computer should look at the version we’re testing, though. It has a Core i5 CPU, 8GB RAM and 256GB SSD, and costs £749.

All three come with a keyboard base and stylus. Take a look at the Microsoft Surface Pro 4’s price and the Lenovo Miix 510 starts to seem seriously alluring. To get a Core i5, 256GB/8GB Surface with keyboard and stylus you’ll currently pay £1,458.98. That’s a jaw-dropping difference.

The Lenovo Miix 510 comes with a one year warranty where you need to get the computer to a service station yourself.

For those who don’t already know devices like this and the Surface Pro 4 inside and out, we’re going to start with the basics. The Lenovo Miix 510 is a hybrid laptop where all the main components live in the screen, including the battery.

While the keyboard is an integral part of a hybrid like this, it’s a relatively ‘dumb’ accessory that doesn’t do all that much work. It just clips on magnetically and lets you type away.

The keyboard also doesn’t prop the Lenovo Miix 510 up. A kickstand on the back of the screen does. It moves around a smooth hinge that lets you tilt the display at just about any angle you like, from ‘almost upright’ to ‘almost flat’. We also tried using the laptop on our knees on the train, and it doesn’t feel too awkward.

The keyboard, on the other hand, is all-plastic. There’s synthetic leather on the back, for a folio-like feel, and soft-touch plastic where you rest your hands. You can make it bend a bit with hand pressure, but it is stiff enough to rest your hands on without it bowing and seeming like a cheap and nasty tablet accessory.

Without the keyboard the Lenovo Miix 510 weighs 900g and is 10mm, bulking up to 1.25kg with keyboard attached. This compares well with other slim and light laptops.

In most respects, it could pass for a device selling at the same price as the Surface Pro 4. A reminder: it’s half the price.

Lenovo has also put in its signature watch link hinge in the Lenovo Miix 510. In its Yoga devices like the Yoga 910 this is used across the main hinge, and looks a lot like a stainless steel watch strap. Here there are just little stretches of it at each side of the stand.

Like most hybrids, the Lenovo Miix 510 isn’t dripping in connections, but you do get the basics. There’s a full-size USB and a USB-C, a good mix of old and new.

Aside from the power socket and headphone jack, that’s it, though. There’s no memory card slot or video output. You can use the USB-C as a video output with the right cable, though.

One part of the Lenovo Miix 510 that isn’t quite as good as the Surface Pro 4 is the keyboard. It’s a little less stiff, and the variant we’re using does not have a backlight.

We’re pleasantly surprised by how laptop-like the typing experience is, though. The keys are extremely crisp, and the action isn’t ultra-shallow. It’s a bit like a hybrid take on a classic ThinkPad keyboard, renowned for their very firm, chunky feel.

Like other hybrids, the placement of the Lenovo Miix 510’s magnets puts the keyboard at a slight angle rather than leaving it completely flat, for a more comfortable type. It works best when you have a flat surface to work with, but as we noted earlier, it’s just fine on your knees too as this machine isn’t too heavy.

The trackpad below the keyboard is nothing too special, a smallish rectangle of plastic that isn’t really big enough to make gestures as comfortable as they would be on a larger laptop. But it’s not like the Surface Pro 4 pad is three times the size either: a 12-inch hybrid only has so much space with which to work, and Lenovo has sensibly prioritised the keyboard.

We’d still recommend a more conventional laptop or a hybrid with a standard keyboard if you’re after something to work on for eight hours a day. But we do find it perfectly fine for long-form typing.

The stylus is also pretty neat for something you don’t have to pay a bunch extra for, as with the Surface Pro 4 and iPad Pro. It’s an active stylus with two buttons on its barrel, pressure sensitivity (2048 levels) and an AAAA battery inside.

Palm rejection, which stops the touchscreen from interfering when you write with the pen, works well and there’s virtually no lag between your pen motions and the results on-screen. Like other active styluses, the screen can sense the pen when it hovers above the screen and you can use it to control Windows completely if you like.

There’s one weak point. The stylus has a basic hard plastic nib and it doesn’t feel as smooth and natural as the iPad stylus as you drag it across the screen’s glass. It will still make a good sketching tool when paired with a high-quality drawing application, though.

The Lenovo Miix 510 has a 12.2-inch screen. Like the Surface Pro 4, it’s about as small as a laptop screen can get while still being well-suited for proper laptop duties rather than just messing about on the internet and checking emails.

It’s a 1920 x 1200 pixel screen, far lower-res than the Surface Pro 4 but comparable with a lot of sub-£1000 slim and light laptops. There’s some mild pixellation but it’s otherwise a great display with no major weak points.

Colour performance is good, covering 88% of the sRGB colour standard, 65.1% of Adobe RGB and 71.2 of DCI P3. This compares well with many more expensive laptops, barring those that offer true ultra-wide colour coverage.

Contrast of 824:1 is very solid too. The best laptop LCD display do reach over 1000:1, but this is still enough to make black look deep and rich, at least until you start playing a movie in a dimly-lit room.

Max brightness of 327cd/m is also strong. As a glass-topped touchscreen display the Lenovo Miix 510’s screen finish is glossy but the backlight is bright enough for outdoors use.

No part of the Lenovo Miix 510’s screen is mind-bendingly good, but by delivering B+ results in every aspect, there’s no weak point to make this anything other than a very satisfying screen. Consider the range starts at just over £500 and this quality level seems all the more impressive.

The Lenovo Miix 510 uses standard Intel Core-series laptop processors, and you have a choice of i3 and i5 variants. Our review version has an Intel Core i5-6200U, a very capable dual-core CPU used by some slim style laptops.

One point to note is that this is significantly more powerful than the m-series chip used by the entry-level Surface Pro 4. There’s enough power on tap for serious applications like Adobe Photoshop. This isn’t a pure lifestyle computer that starts sweating as soon as you ask it to handle something more complicated than a phone-like app.

It’s no the every latest generation of Intel chipset, as 7th gen CPUs are now available. Our assumption is the older version is cheaper, and that Lenovo didn’t find the upgrade worth the added cost.

In PC Mark 8 the Lenovo Miix 510 scores 2143, and 6003 points in Geekbench 4. This is a little lower than the scores of the Acer Swift 3, a laptop that uses the same CPU, making us question whether there’s some additional clock speed management going on here to keep temperatures at bay.

Gaming performance is just a mite worse than the Swift 3 too, although not to the extent it puts the Lenovo Miix 510 in a lower category. Alien: Isolation averages a playable 30fps at 720p with the visuals set to “very low”, slowing down to 12.3fps at 1080p with the graphics maxed. The Acer Swift 3 manages 13fps: a difference but not a huge one.

Like most laptops with this grade of CPU, the Lenovo Miix 510 is not passively cooled. There are fans that blast air out of the top of the screen part. The result: it’s not silent.

We’ve read a few complaints about fan whir becoming quite noticeable, but to our ears at least the Lenovo Miix 510 doesn’t seem any louder than some Core i5 laptops. However, it doesn’t take much for the fans to kick in so it may get on your nerves if you’ll use it in a quiet room most of the time.

As you’d hope, Windows 10 runs very well, and the 256GB gives a good amount of space for your data. The SSD is also extremely fast, a lot quicker than that of most mid-price premium laptops. It reads at 1747MB/s and writes at 1139MB/s, three times faster than a lower-grade SSD.

Those looking for a main computer who do more than just the laptop basics are probably better off with the more expensive version we’re using here. While a Core i3 CPU will perform very well for most tasks, the 4GB RAM and 128GB SSD used in the cheaper Lenovo Miix 510s may become annoyingly apparent when you start juggling apps.

One issue of the Lenovo Miix 510’s design is that there’s not masses of room for a very high-capacity battery. The Microsoft Surface Pro 4 has the same problem.

You don’t get rock-solid all-day battery life here, but it’s thankfully not miles off if you don’t do anything too taxing. Playing back a 720p video on loop the Lenovo Miix 510 lasts 385 minutes, or six hours 25 minutes.

That’s not bad, or surprising, but is a way off the 8-10 hours you can get from the best tablets and conventional slim laptops.

Other periphery features aren’t that exciting either. The Lenovo Miix 510 has two cameras, a 5-megapixel one on the back and a 2-megapixel one on the front. While the rear camera is better than the average webcam of a laptop, its pictures are still fairly soft and low on detail. And the front camera’s feed is both soft and milky-looking.

The Lenovo Miix 510’s speakers aren’t particularly high-performing either. There’s a driver on each side of the tablet part, making the sound reasonably wide. However, it’s also quite thin. Bass is very limited, making an iPad sound very powerful in comparison.

The speakers are fairly clear and loud, though, making movie dialogue seem clean. But students looking for something to play iPlayer and Netflix through regularly will want to invest in some speakers.