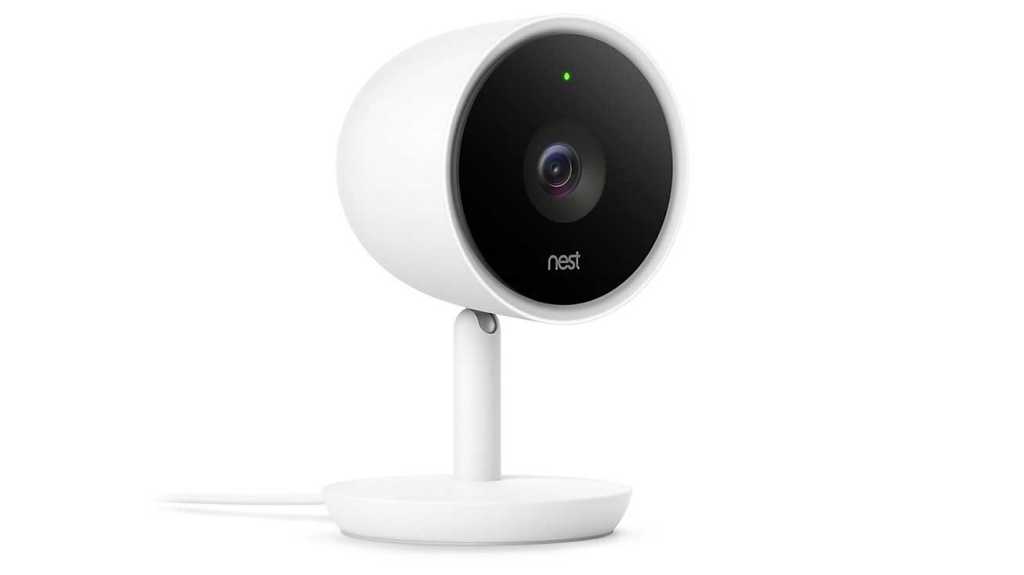 If your wallet and broadband can cope with it, the Nest Cam IQ is a great all-round package. However, given the issues with facial recognition and reliance on the subscription to use most of the features, it doesn’t represent good value.

Home security cameras have come a long way and Nest’s Cam IQ offers some impressive tech for those with deep pockets.

This is the first 4K security camera I’ve seen, but it delivers video at 1080p and instead uses the 4K sensor for virtual pan-and-zoom.

You can buy a Nest Cam IQ for £299 from Nest, but it’s also available from the usual large retailers, such as John Lewis, for the same price.

The cheapest is Priority Plumbing, which sells the camera for £268.

However, even at this price, it’s way more than even some of the most expensive cameras I’ve reviewed, and that’s just the start.

If you want it to be useful, as in recording any video and giving you sensible notifications, you’ll need a Nest Aware subscription. That costs £8 per month for a 10-day history, but you can go the whole hog and store video for 30 days for £24 per month.

Note: There is a new version of Nest Aware which is much cheaper and covers multiple cameras for one price, but it doesn’t record continuously.

Don’t forget that the Nest Cam IQ records continuously, not just when activity is sensed, so you can rewind to any point, day or night, like CCTV.

This is a great feature, but it can also take its toll on your broadband connection. At the highest quality, it will upload 400 gigabytes of video to Nest’s servers each month. (It defaults to ‘normal’ quality which is around 200GB per month.)

If this sounds too expensive, consider Netatmo’s Welcome camera. It introduced facial recognition back in 2015. It costs £154 from John Lewis and requires no subscription, as it records to a microSD card in the camera itself. Frankly, the facial recognition is no worse than Nests: both have their flaws.

For more choices, see our roundup of the best security cameras.

If you own, or have seen, a Nest Outdoor Cam, then the design will look familiar. However, the stand is new.

It has a simple, but elegant, hinge that allows the camera to tilt up or down so it’s pointing almost at the floor when places on a horizontal surface. The solid metal construction means it remains stable at all angles and, happily, doesn’t need any tools to adjust it.

There’s no way to wall mount it unless you use the tripod thread in the base and provide your own suitably equipped mount that will allow it to screw on. 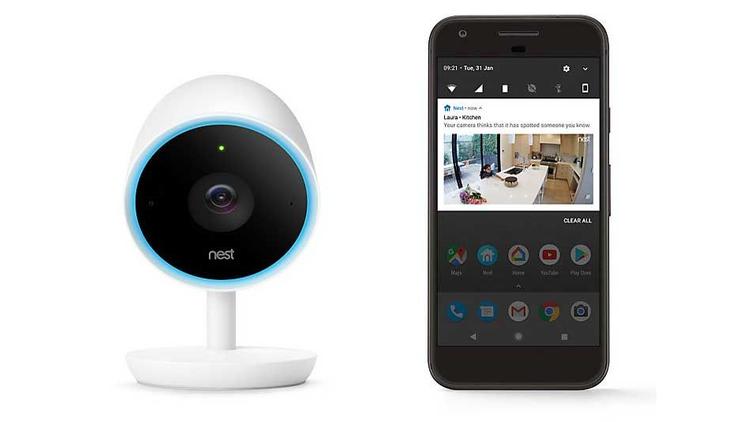 A long USB-C power cable is included with a mains adaptor.

Surrounding the lens is an LED ring that’s similar to Nest’s Protect: it glows blue during setup and green when it’s successfully connected to your Wi-Fi and Nest’s servers.

Round the back is a speaker grille and along with three microphones offers both good audio recording and also talk-back. You can press the mic button in the app to speak through the camera, and it’s the best-sounding two-way system in any security camera I’ve seen.

Another feature which adds to the price is 802.11ac Wi-Fi. This no doubt helps to ensure a speedy network connection to upload all that high-quality video without any stuttering.

As I have a Nest thermostat as well as a Protect smoke/CO alarm, adding the Cam IQ via the app was as simple as using my phone’s camera to scan the QR code on the underside of the base, then pressing the button on the Protect. 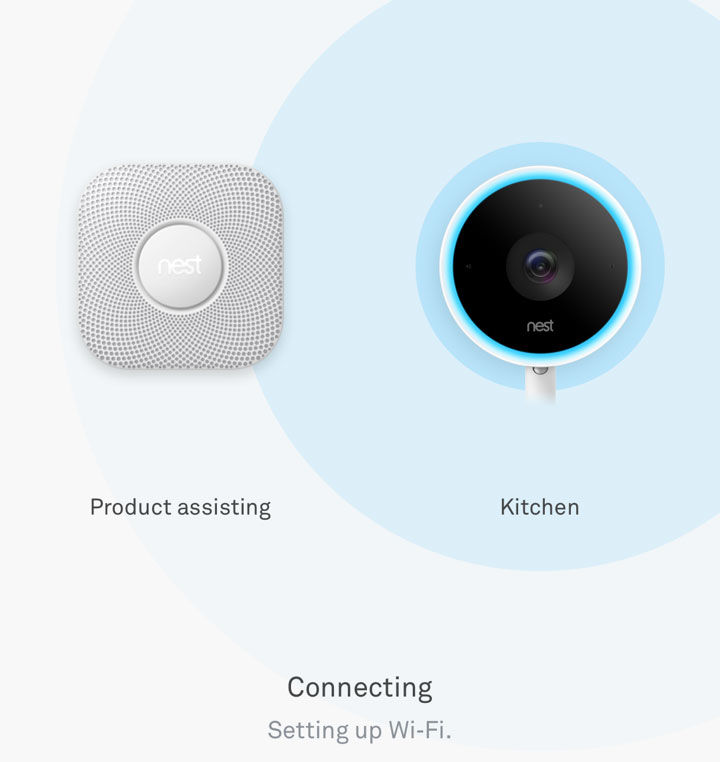 This allowed the Protect to share the Wi-Fi credentials with the IQ and get connected fast. Actually, the process failed the first time, but worked the second.

You then select a couple of options in the app, such as whether or not you want to use the Familiar Faces feature. More on that shortly.

If you’ve had Nest Cams before, you should be familiar with the ability to schedule when it records and when it doesn’t. There’s also an option to use your location (actually your phone’s location) and start recording when you leave home and cease when you return.

As with other similar systems, you can use only your phone, but it’s best if everyone in the household uses the app and is added to the ‘family account’.

Otherwise it will continue recording if you’re out but other people arrive home. This could be what you want: you’ll get notifications when your kids arrive home from school, for example.

There are no resolution settings to change: only the quality recorded, as discussed above.

The camera offers a 10-day trial of Nest Aware so you can test out the features, including continuous recording, activity zones and face recognition.

The latter is only available on the IQ: other Nest cameras can only detect if a moving object is a person or not. 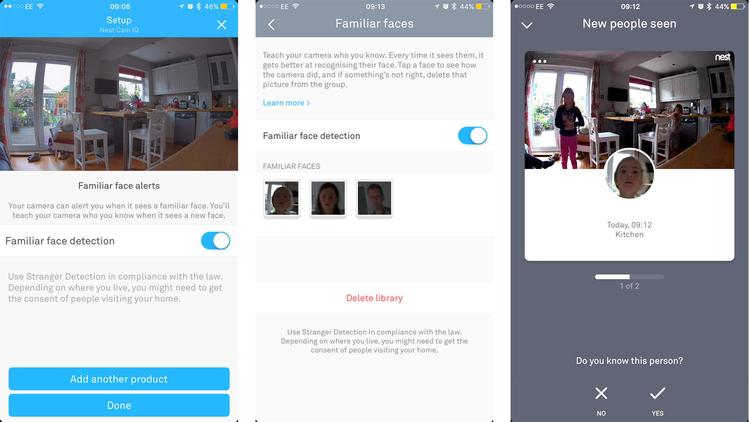 Each time a new face is seen, you get a prompt and can then review the capture in the app and tell it if it is someone you know or not.

It uses the same algorithm as Google Photos, so it’s not too surprising that it works pretty well. It can identify who’s who even if you’re not squarely facing the camera, or even walking past it quite quickly.

It’s possible to name each familiar face and you’ll know instantly from a notification who has been seen without having to open the app and check the history or live view.

However, it isn’t perfect. As with the Netatmo Welcome camera, you’ll get the odd false alert when a known person is not recognised. The system is also easily fooled by pictures of faces, or faces that appear on TV. On one occasion there was no face in the image at all, and on another, it highlighted my cat who wasn’t even facing the camera.

Nest does advise that having a TV in the frame is not ideal, but if you can’t avoid it (as I can’t in my kitchen) then you’ll probably have to disable the camera while the TV is on to avoid lots of unnecessary warnings of unfamiliar faces detected.

You can choose how to get notifications, which oddly default to sending you an email every time motion is detected. More likely is that you’ll want notifications on your phone only when an unfamiliar face is seen.

You can set schedules, too, so you’ll only be notified during the hours you choose.

Helping to prevent false alarms, you can select ‘activity zones’. As long as you disable the general ‘Motion’ alert, you’ll then only get notifications if faces or people are detected in those areas. This is a potential workaround for situations like the one above where your TV sets off alerts of unknown faces.

There are also notifications when there’s a loud noise, so you could get early warning of a break in or some other problem before the camera spots any motion. 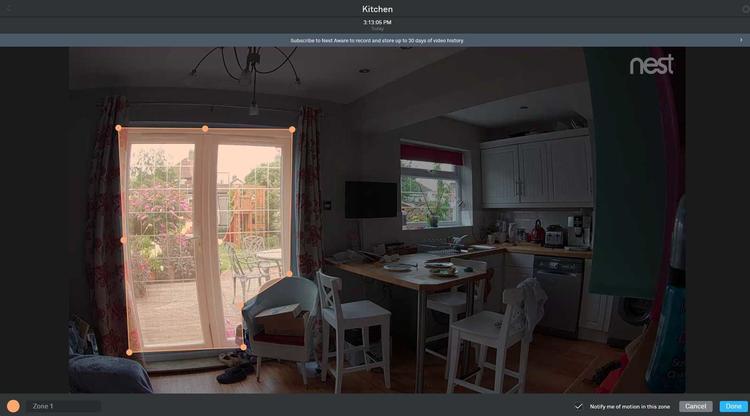 Annoyingly, like the original Nest Cam, you can’t set activity zones in the iOS or Android app, but only via the Nest website.

At least you’re not limited to rectangles as with most security cameras: you can drag the points to any position.

Nest also has an IFTTT channel for the camera, so you can create recipes based on audio or motion triggers.

As I said at the start, the IQ records video at 1080p, not 4K. It’s a shame that there’s no option to save 4K video to a hard drive, SD card or NAS on your home network.

However, the 4K sensor does have benefits. Aside from the great-quality Full HD video you get from downscaling 4K, there’s something called Supersight.

This allows the Cam IQ to ‘zoom’ in on the 4K sensor to show a 1920×1080 crop. It does this so you see more detail when it detects motion as it can track a person as they move around the room.

Supersight is only in the app: you won’t see it in the website, although you can zoom in and pan around the image manually.

In the app, you see both the zoomed in video, plus a thumbnail of the whole image, which you can drag and reposition anywhere on the screen.

During the day, the Cam IQ offers great quality. There’s a good amount of detail and accurate colours. However, there’s not noticeably more detail than other 1080p cameras, such as the aforementioned Netatmo Welcome.

Here’s a 1080p screengrab – click or tap on it to see the full-size version: 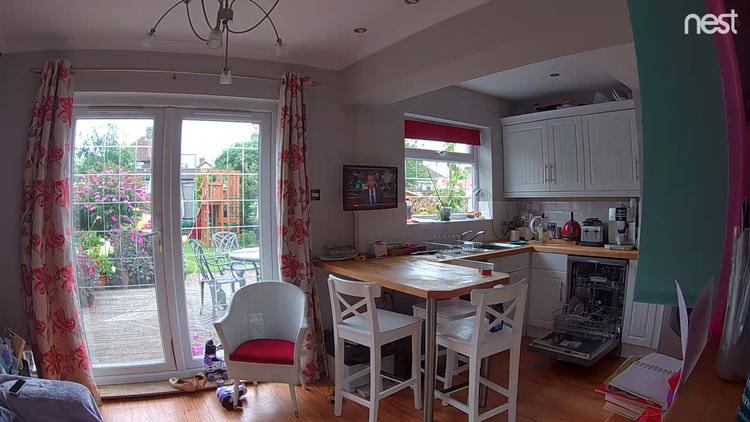 When you zoom in on the image (or watch the Supersight feed) you’ll quickly spot the effects of the compressed video with smeary textures and even a bit of noise. This still applies if you whack the slider up to maximum quality (400GB per month).

Obviously, quality will depend upon your exact scene as some are easier to compress than others without losing detail.

As I’ve said, audio quality is excellent: it’s just as good as on a video recorded with the latest iPhone.

At night, infrared LEDs are used to light the room. They do a decent job, too, offering a fair amount detail and they can cope with a large room: lesser cameras can only ‘spotlight’ a central area and can’t light up objects at the far side. 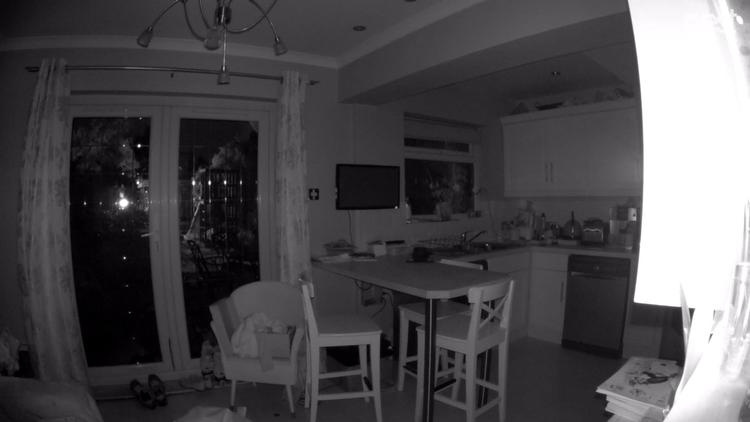