Mario + Rabbids Kingdom isn’t going to be a game that appeals to everyone with the slow pace and limited gameplay. It would need to be full multiplayer rather than optional co-op with a range of modes for that. However, it does have fun and casual nature and an easy going game for younger players to pick up.

It’s widely agreed that Nintendo had a great show at E3 2017 in LA and one game that caused quite the ruckus is Mario + Rabbids Kingdom Battle. But what’s all the fuss about? Luckily we’ve been able to have a go at Nintendo’s post-E3 showcase in London.

Mario + Rabbids Kingdom Battle will launch exclusively on the Nintendo Switch on 29 August and you can pre-order at retailers such as Amazon and GAME.

It’s been a few years since the last Rabbids game that wasn’t for mobile platforms, Rabbids Rumble which launched on the 3DS back in 2012. The franchise first appeared back in 2006 as a Rayman spin-off.

The rabbit-like creatures have made a bit of a name for themselves over the years so it seems about time and fitting that the Rabbids universe should collide with Mario’s.

In Mario + Rabbids Kingdom Battle everyone’s favourite plumber discovers a giant vortex floating above him on the way to Princess Peach’s castle. Out of it pour Rabbids who, as usual, cause all kinds of mischief and chaos.

Mario must team up with Luigi, Princess Peach, Yoshi, plus four heroic Rabbids dressed up as Mario and his friends to defeat enemies and restore the Mushroom Kingdom to its peaceful state.

Read our list of best and upcoming Nintendo Switch games. Nintendo might be working on an  N64 Classic Mini. 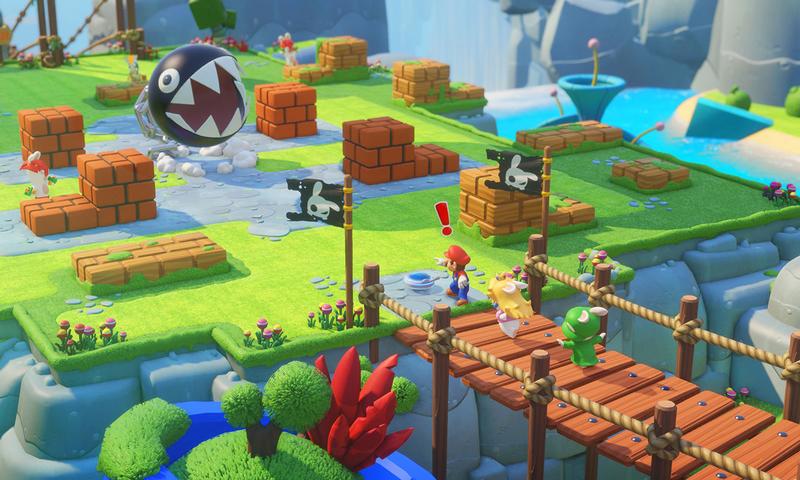 We’d be lying if we said we weren’t expecting a chaotic but cuddly shoot ’em up game of almost Splatoon proportions, but it’s nothing like that really.

Instead, Mario + Rabbids Kingdom uses a turn-based style of gameplay which is reminiscent of games like Advance Wars or Worms. Like the latter, you’ll have a team which you control in order to get through each level across four different worlds.

In the demo version we played as Mario with Peach and Luigi versions of Rabbids also joining the team. In the full game you’ll be able to choose which three characters you want to use for each level.

Each of the eight characters have different strengths so for example, Luigi is great a long range shots and Rabbid Yoshi is there when you need heavy weapons and explosives. You can customise each one’s abilities with a skill tree.

Much like the classic series of Worms games, you can tactically choose what to do with each player on your team. You can essentially move and shot but not strictly in that order if you don’t want to.

There are a whopping 250 weapons with unique stats which is probably a bit too many but you can’t blame Ubisoft for doing the minimal amount. It’s up to you whether to gang up on one enemy or spread your firepower.

Levels are varied enough to keep things interesting so it’s not just a case of eliminating all enemies every time. You might have to simply get one of your team members to the other side of the level, for example. 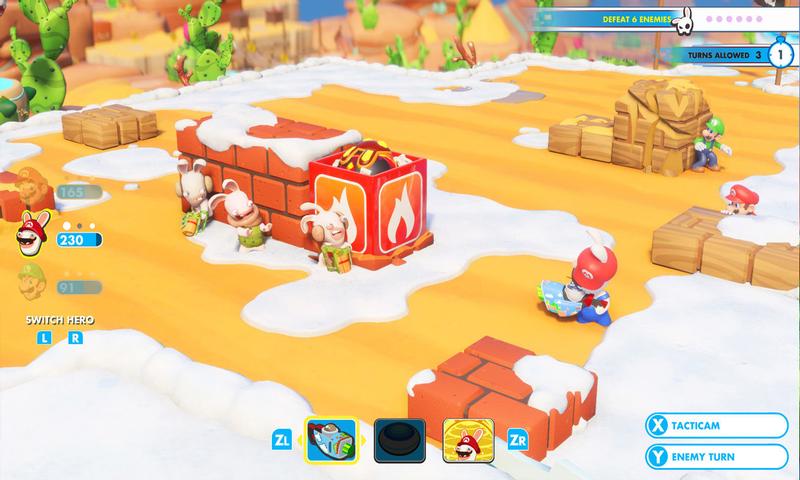 There are also a range of different enemies to content with – they will vary in strength and weaponry. You can also make use of level elements such as pipes and boxes that explode.

The ability to combo elements is good so you might use a teammate to get to a pipe (they give you a boost), kick an enemy, retreat with another pipe, all before firing a weapon.

It’s all fairly basic and the turn-based gameplay can seem slow at times. The game will perhaps appeal to younger players where controlling a player in real-time as you do in games like Splatoon 2 is too advanced.

Mario + Rabbids Kingdom Battle is designed exclusively for the Switch so works in all the console’s modes. You can also play local co-op with additional challenges, even if you just have two Joy-Cons.