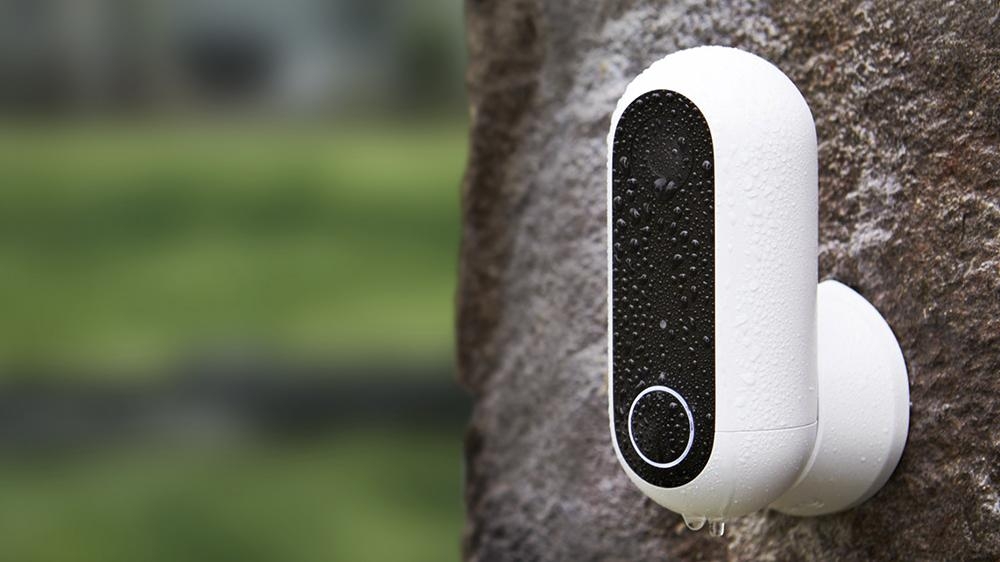 The Flex is a great security camera. It’s simple to set up, monitors your home and offers good-quality video. It’s unfortunate that you now have to pay to access certain features, but this is par for the course with security cameras that record to the cloud these days. If you really don’t want to pay for a subscription, you’ll have to go for a camera that records to an SD card such as the Netatmo Presence or EZVIZ Mini Plus.

In November 2016, we reviewed the Canary indoor camera and were impressed by its good looks, video quality, ease of set up and the great app.

Since then it launched an outdoor option: the Flex weatherproof camera. The Flex  records in 1080p through its 116-degree wide-angle lens, day and night.

Since writing both reviews, the company has taken the decision to remove a number of services in favour of asking owners to pay for these through Canary Membership. Current memberships are priced at £79 per year or £7.99 per month. In the US it’s $99 per year or $9.99 per month.

Recently, though, Canary changed Membership again so the monthly fee covers up to five devices. This makes it a much better deal and something we can once again recommend.

Most significantly, you can now get a Canary camera completely free when you buy two years of Membership, which is another good deal. Rivals such as Nest charge high prices for cameras and then make you pay for cloud storage per camera.

For those considering a Canary now, here’s what you need to know about Membership vs Free Access (i.e. paying or not paying for a subscription):

You also get a two-year rather than one-year warranty if you subscribe to Membership.

Below is our original Canary Flex review:

It costs £199 from John Lewis, Amazon, Curry’s, Maplin and Argos. It’s $169 if you’re in the US – you can also buy direct from Canary’s website. It comes in both black and white versions.

If you do buy from John Lewis in the UK, you’ll get a two-year warranty instead of the usual one.

The price is £40 more than the indoor version, but it’s well worth the premium as it can run off its lithium-ion battery as well as from the mains. (And it’s waterproof of course.)

As we mentioned above, you can get the Flex for free if you sign up to a two-year Membership subscription.

Also available are a range of accessories including:

The unit itself is looks great but most importantly it is very well made and feels extremely durable. In addition to the camera, the Flex is packaged with a 360-degree magnetic swivel base that allows you to sit the camera on a flat surface indoors as well a wall mount it to an interior or external wall using the supplied hardware. 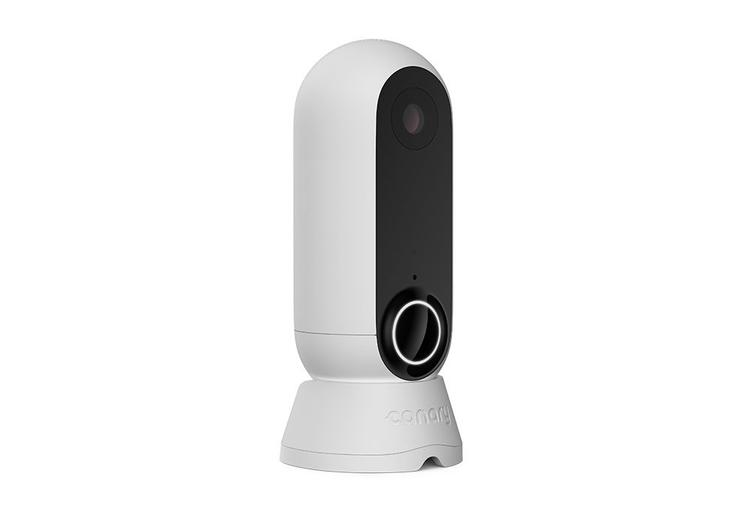 The Flex is also supplied with a mains power supply that can power the unit inside and out as well as charging it for wireless use. Canary claims that a full charge of the unit can last for up to two months of wireless use.

Although there’s a speaker as well as a microphone, it’s not yet enabled for two-way communication. Also, unlike the indoor camera, the Flex doesn’t have air-quality sensors, nor does it record the temperature.

Like the original Canary, the Flex could not be easier to set up. Simply download the app (iOS or Android) and follow the on-screen instructions. If you already own the original Canary indoor camera you can setup the Flex your existing app and add it to your account where you can simply toggle between cameras.

My only complaint would be that although the magnetic mount works brilliantly indoors, I would have liked to have the option to secure the camera more firmly to an exterior wall without having to buy an additional accessory – the Secure Mount – and would be concerned that without this, the Flex itself could be removed or stolen by the very people you are attempting to deter.

In the end, I did install the camera using the Secure Mount. Fitting it requires just two holes to be drilled in an exterior wall before you can secure the camera in place using the supplied fittings. The mount not only firmly attaches the Flex to your wall but it also allows you to rotate the camera to find the perfect angle before locking it securely in place.

The app – available for iOS and Android – allows you to name each camera and it’s easy to scroll between them if you have more than one. Once you have selected the Flex you’re presented with a home screen where you can view the strength of your Wi-Fi connection and the remaining power in the rechargeable battery (unless you opt for a wired connection). 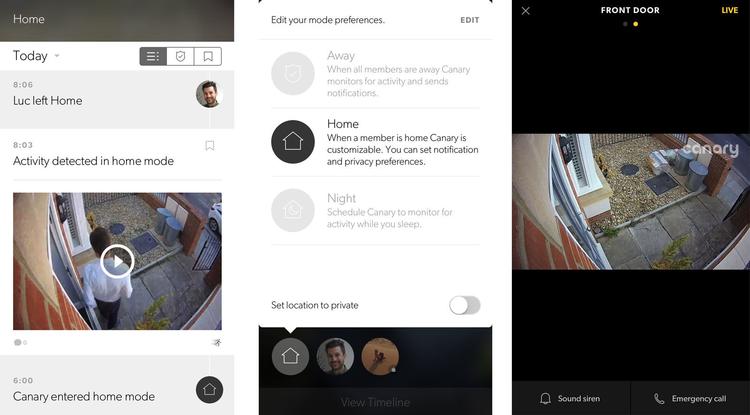 There are then two key functions available to you, camera mode and timeline.

The camera mode allows you to manually select one of three surveillance settings: “Away” that monitors the home in your absence, “Home” that tells the Flex you are home and disarms it and “Night” mode that allows you to schedule your Canary Flex to monitor your home when you home and sleeping. In this mode, you can set notifications so they wake you.

Home and Night modes are customisable, allowing you to set preferences for whether the camera records footage whilst you are home or enters privacy mode and whether you receive notifications during the night.

When you are away from home you can set the Flex to provide notifications for any activity it monitors, alerting you to any movement or noise and allowing you to play back footage of it. You can also opt to watch live footage from your cameras home screen, this takes a little while to load the live stream depending on Wi-Fi access but it is a useful feature.

The timeline presents you with a chronological view of activity including who’s home, any setting changes and most importantly activity history with downloadable footage which is available for the previous 24 hours (or 12 hours if you have two cameras).

You can upgrade this to store a 30 day history with a Canary Membership starting at £7.99 per month or £79 a year for a single device and increasing with each device that is added.

The motion detection uses a combination of the PIR sensor (the same type you’ll find in a lot of outdoor security lights which turn on when they sense a person moving) and software algorithms. Canary says this approach increases battery life compared to just using software.

Sensitivity can be adjusted in the app from Low (1) to High (10). If you set the sensitivity to Low, your Flex will still record footage of any motion it detects but will not send you as many notifications, the opposite is true of high sensitivity mode.

In addition you can also use the app to set the recording range of the camera from short range, which preserves battery life (it just uses the PIR) to long range which uses more power.

The quality of footage is very good with crisp detail in daylight and it’s still decent night using the camera’s automatic night vision. As you can see in the image below, the angle means the image is exposed for the wall: you’ll probably see more detail across the image if you point it away from the wall.

Audio quality is also extremely clear with sound recorded through its in-built microphone.

Here’s a screen grab from the daytime: 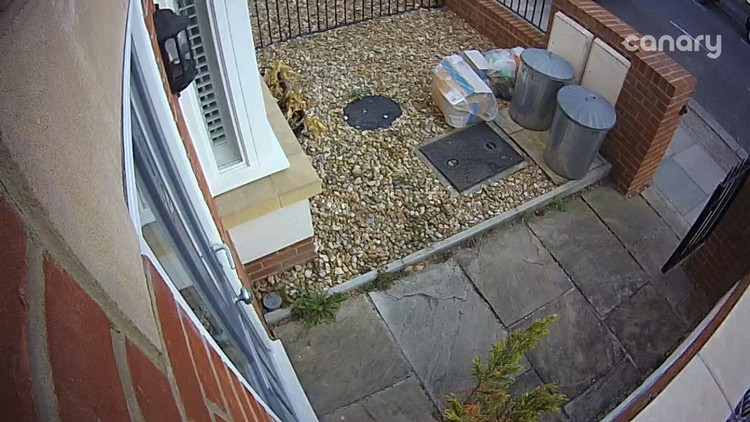 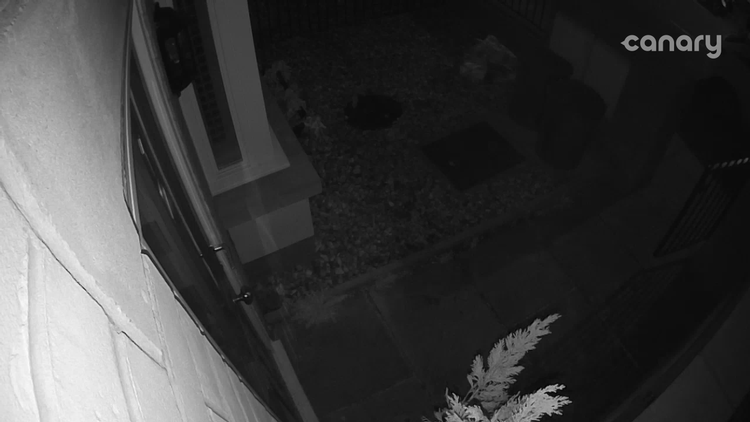 This footage can be watched in both portrait and landscape modes using the Canary app and you are able to zoom into recordings using a simple tap or pinch gesture.

You can select the footage you want to download from the timeline, open the Options menu, tap ‘download video’ and it will be saved directly to your camera roll.