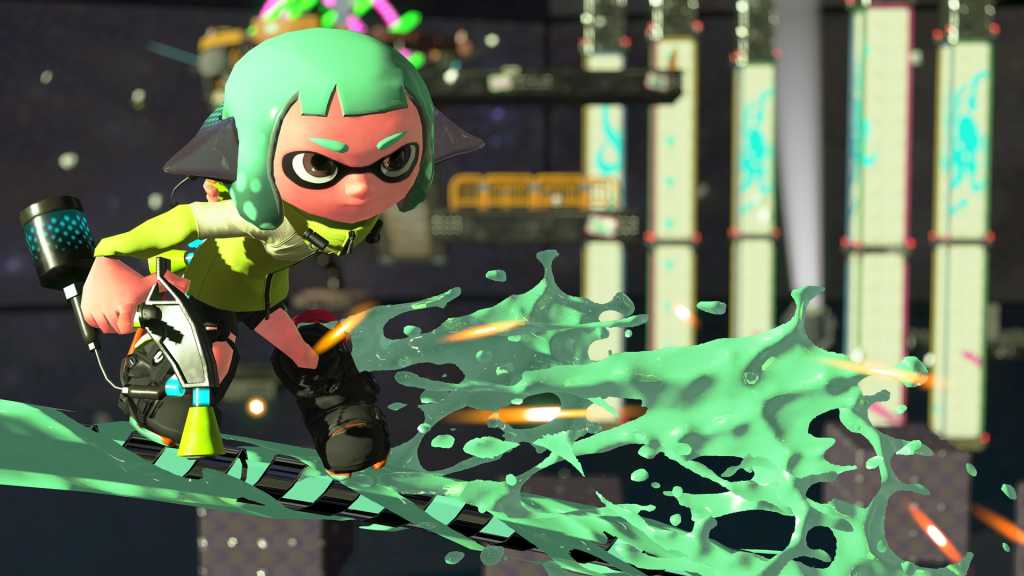 At times it feels more like Splatoon 1.5, but when the original was so fantastic – and so let down by the Wii U’s small player-base – it’s hard to complain too much. Minor improvements and additions run throughout the game though, along with bigger changes in the single-player and new Salmon Run mode, and Splatoon 2 is an easy recommendation for newbies and veterans alike.

Nintendo threw us all for a loop when it first unleashed Splatoon on an unsuspecting public back in 2015. The squid-themed paint shooter was a major new IP driven by online multiplayer – both rarities for modern Nintendo – and turned out to be one of the company’s best games in years.

Now Splatoon 2 is here, freed from the ailing Wii U and instead releasing on the Switch, where it can hopefully reach a wider audience. So should you go squids in, or is it a wash-out? Find out in our Splatoon 2 review.

If you’re in the UK, you can grab a copy from Amazon, Game, or the Nintendo official store (with either a free T-shirt or baseball cap) for £49.99. In the US, you can find it from Amazon, Best Buy, or GameStop for $59.99.

There are also a few accessories to keep an eye out for, like the Europe/Japan-only Neon Green & Pink Joy-Con ( you can grab them here) or the similarly coloured Pro Controller – available in the UK or the US.

In case you didn’t play the first game, Splatoon 2 is a third-person shooter with a pretty major difference: instead of shooting bullets, you shoot coloured ink, and the aim is as much to coat the floor and walls in the stuff as it is to take out your enemies.

This is probably easiest to explain in the context of the main game mode: the online multiplayer Turf War. Two teams of four compete in one of several arenas, with the victors decided not by kill count, but by how much of the map is covered in their colour of ink when time runs out.

Taking out your opponents helps – if only to briefly stop them inking the map themselves – but the real goal is to coat every inch of floor in your team’s colour.

Doing so has immediate tactical benefits too. Entering enemy ink slows you down and deals damage, so you want to minimise it. You can also transform into a squid when you’re in your own ink, letting you refill your ink tank and zip around the map far faster.

The result is a game that feels as much a platformer as a shooter, and which encourages radically different tactics. Should you focus on eliminating enemies or inking territory? Shore up your own turf, or delve in to take over the other team’s?

To keep track you’ll have to have an eye on the map, which shows ink coverage in real time, though this highlights the one minor downgrade from the original. That was built around the Wii U’s unique hardware, and kept a map on the second screen at all times – here you have to press a button to bring it up, an inconvenience given how important it can be for game tactics.

If Turf War is the simplest way to explain Splatoon 2’s base mechanics, then its singleplayer campaign undoubtedly shows them off to their fullest potential across its 8-10 hours of gameplay.

Anyone who played the original Splatoon will find themselves in familiar territory here. Once again you have to work through a series of levels made up of floating platforms, taking out the evil Octarians in the name of rescuing the Great Zapfish.

The campaign is split into five hubs, each with a selection of stages to be discovered and culminating in a boss fight. Almost every stage seems to introduce a new mechanic, from Octarian bowling balls to tiny treadmills, but the game does a great job of layering and iterating them as it goes.

Many mechanics will be recognisable from the first game – along with most of the enemies – which adds slightly to the sense that Splatoon 2 isn’t quite a full sequel. But even if it feels familiar, this is level design up there with the likes of Mario Galaxy, and it’s a joy to dive through Splatoon 2’s world all over again.

There have also been some welcome refinements this time around. The hubs are livelier and more complex – making rooting out each stage a pleasure rather than a chore – and re-playability has been improved massively by the ability to play each stage with any of the game’s core weapon sets.

That also helps make the single-player much better preparation for heading online, as the campaign forces you to get to grips with all of the different weapons on your first time through, rather than sticking to one of the core guns.

Many of those weapons return from the first game – including the likes of the Slosher and Heavy Splatling from the game’s free DLC – but there are some ingenious new additions.

The Splat Dualies are a pair of pistols that let you use a quick dodge while firing; the Splat Brella can fling ink at short range, shield the user from attacks, and even be sent flying forwards, spraying ink as it goes.

Each weapon is unlocked in a set with a Sub and a Special. There are a few new Sub Weapons, like the Curling Bomb and Toxic Mist, but the Specials have been entirely revamped, with new additions like Splashdown, which attacks every enemy nearby, and the Sting Ray, a slow turning super weapon that can somehow shoot through walls (!?).

Gear is also back, with a similar selection of colourful streetwear and costumes, split into footwear, tops, and headgear. Each carries random abilities, unlocked through play, though it’s also possible to customise abilities – for a price – if you’re looking for the ideal aesthetic/ability combo.

Multiplayer stages are also a mix of old and new. Port Mackerel and Moray Towers are back, but there are new arrivals like Musselforge Fitness, which boasts a wealth of ramps and cover, and Sturgeon Shipyard, which includes moving and rotating platforms to navigate.

Tower Control is probably the best of the bunch, with a satisfying back and forth as the tower moves from one end of the map to the other, stalling at checkpoints that allow the defending team to make a comeback. Rainmaker is conversely the weakest – the name comes from the gun that serves as the objective, but once you grab it you become such a target that you rarely get the chance to enjoy using it at all.

One entirely new addition is League Battle, which allows teams of either two or four people to compete against other groups over two hours to rack up the most possible points – though it’s locked to players who’ve earned at least a B- rank in Ranked Battles, so the standard is fairly high.

A bigger change is Salmon Run, an entirely new co-op mode in which players are recruited to the mysterious Grizzco to steal eggs from the newly introduced Salmonids.

Ethical concerns aside – and we have many – this is basically a wave defence mode, with hordes of approaching Salmonids interrupted occasionally by mini-bosses, each of which requires a different strategy to overcome, and rewards you with lucrative Golden Eggs.

At first blush, Salmon Run seems a perfectly diverting but rather slim proposition, but we suspect there are hidden depths here – and it could expand greatly if Nintendo expands on it with free content in the future. The chief downside right now is that it’s only available at certain times – presumably to maintain player numbers – which means it’s often not there when you want to play it.

All of the online content is powered by the Nintendo Switch Online app for online play and voice chat, which will be free until the end of the year. It’s less fiddly than you might expect to set up – you simply create a chatroom within the game, then use your smartphone to invite friends and do the actual chatting.

There are also Splatoon 2-specific features within the app, including stat tracking, info on upcoming stage and game mode rotations for the multiplayer, and a few exclusive bits of gear to buy.

Finally, all of the online game modes are available offline too, but only through LAN or wireless with other Switches – there’s no split-screen multiplayer at all, which is a real shame, and seems to fly in the face of Nintendo’s recent push to bring back offline multiplayer games.

Of course, that’s a small blemish in an otherwise spectacular return from Nintendo’s most promising recent franchise, and there’s plenty to recommend here for both those new to Splatoon and those who’ve already sunk countless hours into the original.

New players will have the joy of discovering the tight, innovative gunplay and vibrant world, complete with customisable neon streetwear and an oh-so-Japanese soundtrack – now highlighted in a rhythm game built into the in-universe arcade.

Returning players will find much that’s familiar, it has to be said, but for the most part improved. The expanded single-player and Salmon Run alone make this worth a return, while the new weapons, maps, and – crucially – player-base should make it all too easy to lose a few weeks to the online multiplayer.