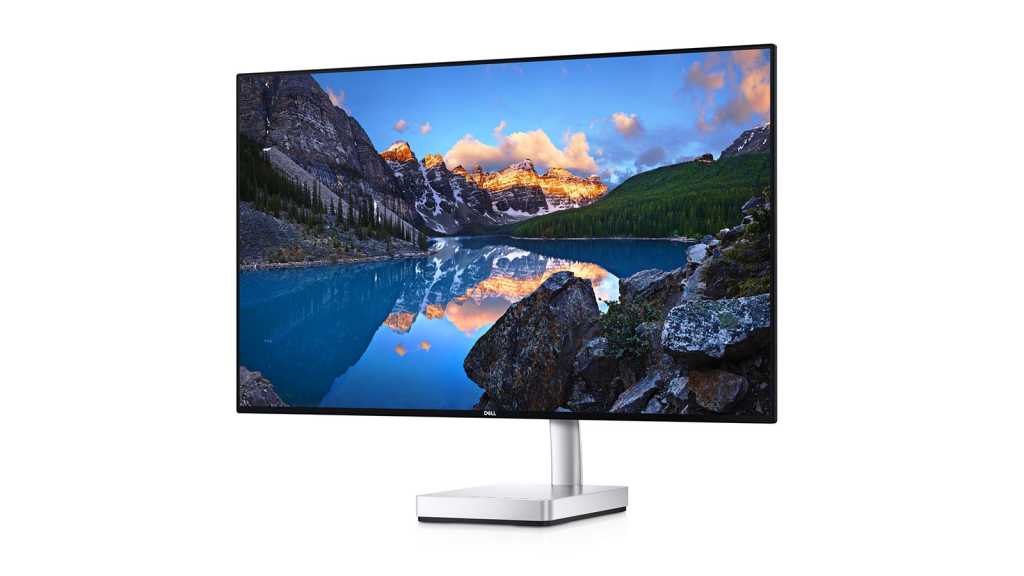 If you desire wafer thin displays with very colourful output then Dell has engineered something quite stunning for you to drool over. It also supports the latest USB technology and HDR output, but at a price. That high cost pushes the Dell S2718D into the market for things that look great on executive desks, but are rarely used to their full potential. If you want something unapologetically chic to adorn yours then the S2718D is a taste of what screens will be like in the future, if we’ve not all switched to using augmented reality by then.

Even before the Dell S2718D was plugged in it had effectively convinced us that it was special. The box that it comes in is a masterclass in cardboard engineering, contains zero static-inducing expanded Styrofoam, and cossets the panel and it’s permanently attached stand perfectly.

After releasing four plastic locking lugs, the outer skin of the box slides off, the two side supports pivot away, and the S2718D can be lifted cleanly out ready for deployment.
Fortuately, the box is significantly upstaged by the monitor inside.

Dell has made some truly graceful displays in the past, but this design makes them look like they were beaten repeatedly with an ugly stick from birth.

The tactical decision not to offer a VESA mount, allowed Dell’s engineers to build an astonishingly thin panel, placing all the connectivity in the base. What that choice failed to do was provide enough space to include the PSU in the finely milled base, so that’s a separate one of the variety that they use with their XPS laptops.

Along with HDMI 2.0 the base also offers a USB Type C connection as an alternative means of video input. As an upstream connection it also enables two downstream USB 3.0 Type A ports that form part of an integrated hub.

The beauty of using these options is that with a supporting laptop you can connect this monitor, mouse, keyboard and other even more peripherals with another suitable USB hub.

And, the being bi-directional the USB port can also charge any USB device up to 45 watts. That power limitation does exclude Apple’s latest MacBook Pros, unfortunately. But back to that support arm, and a few peculiar quirks that it exhibits.

The curved arm has a two axis joint connecting it to the panel that allows for both tilt and swivel, but not twist, negating the possibility to use this design in portrait mode. And, by definition you can’t wall mount it.

Another aspect of this support arm arrangement is that there is no space for speakers in the S2718D at all, so you’ll need to attach external ones to the audio pass-through on the base if you’d like any.

What it does achieve is avoid most of the cabling clutter and hanging wires that are indicative of many designs and that might be helpful if your desk faces outwards and not facing a wall.

If the support stand is the Antipasto of this product, the main course is most certainly the panel.

Dell is promoting this as the world’s thinnest monitor, and at just 7mm it is actually 0.1mm thinner than an iPhone 7, incredibly. The 6mm wide frame borders go in all four directions, with the manual controls on the base, further enhancing the clean and couture lines of this product.

One less than welcome aspect is that Dell decided to gloss coat the panel, allegedly to enhance the contrast and colours, even if some reflection results. The 3H Hard Coating used eliminates some of this glare, but using one of these next to a window without blinds can be problematic.

The silver colouring looks designed to attract Apple fans, so maybe we’ll see a Rose Gold variant if it sells well to that market sector.

For testing purposes we chose ‘standard mode’, as not to confuse our Spyder5 Pro colour calibrator.

We’ve well used to monitor makers somewhat exaggerating the capabilities of their product, but the Dell S2718D is almost exactly what it specifications sheet describes.

Quoted brightness is 300 cd/m ², sRGB is 100 percent, one percentage point better than Dell declared and the Gamma is almost exactly 2.2 over its full tone response.

While sRGB coverage is good, a Gamut of 77 percent on AdobeRGB hints that this isn’t perfect for colour matching. That’s not to say that the Dell S2718D can’t generate some amazing colours, they’re just not the ones that Adobe appreciates.

This design is promoted as HDR (Scalar-only solution), and it will accept HDMI signals with HDR metadata embedded in it, though getting to see this in action is actually more challenging than that statement suggests.

The PC in general is woefully underprepared for HDR displays and content, and as a result launching most games will result in seeing a small logo telling you that, even if you selected a HDR mode, that there will be no HDR output.

You need specific games or a special video rendering configuration to playback HDR video files, or a Microsoft Xbox One S or Sony PS4 with a game that supports HDR. Not just any HDR either, as this monitor requires HDR10 enabled content, not the alternative Dolby Vision scheme.

When the screen does go into the HDR mode it can be very striking, especially if those encoding the source video did their jobs effectively.

If you’re reading this and thinking that you might be interested if this screen was 4K, then be careful what you wish for, because HDMI 2.0 doesn’t have enough bandwidth for true HDR in 4K resolution without using YUV420 colour compression.

Therefore, the 1440p resolution of this screen isn’t an arbitrary choice on Dell’s part, but a practical concession to the limits of HDMI 2.0.

And, while HDR on this screen can look terrific, it is far from being something your PC or laptop will output naturally at this point, unfortunately.

You can’t really blame that on Dell, but it is worth considering if you want one to watch HDR content from a service, Blu-ray or while PC gaming.