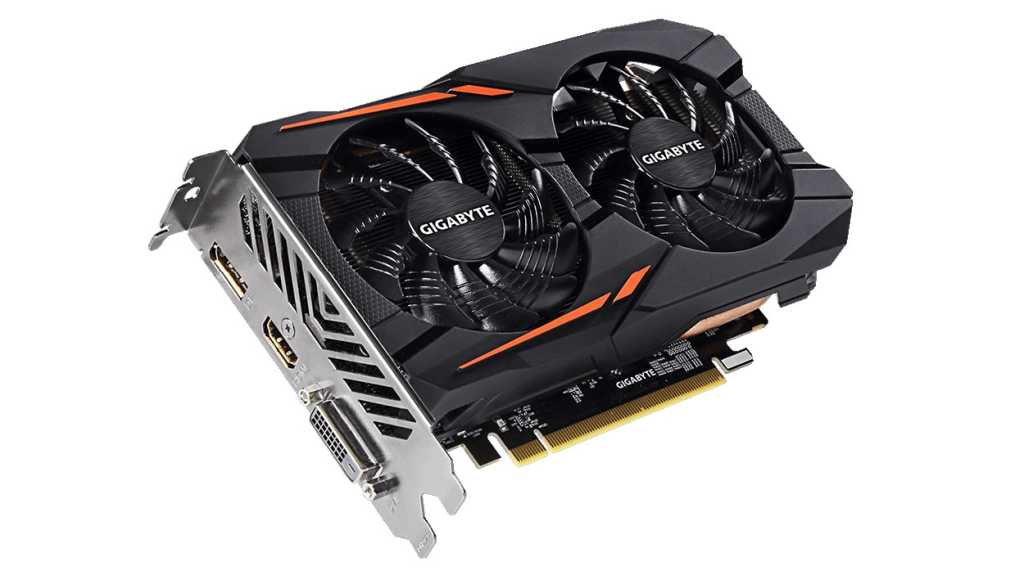 The Gigabyte Radeon RX 560 OC offers good performance for the money in its 2GB version and a degree of future-proofing in its slightly more expensive 4GB version. Both offer good build quality, high performance cooling and silent operation options via the supplied overclocking software. However, there are less expensive RX 560 cards available from other vendors.

Sitting close to the lower end of AMD’s Radeon RX 500 range, the RX 560 straddles the performance gap between e-sports, which are typically much less demanding on graphics hardware, and modern AAA titles which can call for every bit of performance from even the most powerful GPUs available.

The Radeon RX 560, then, allows for solid high frame rate esports gameplay with the quality settings maxed out, and is also fast enough to have a stab at more demanding games, albeit at lower resolutions and with the quality dialled down a few notches. Most importantly, it does this at an affordable price.

Note, however, that there are two revisions of the Gigabyte Radeon RX 560 Gaming OC 4GB and they are very different products: see more below.

HOW MUCH DOES THE RADEON RX 560 COST?

The RX 560 Gaming OC 2GB costs for £119.99 from Overclockers UK, while the 4GB will cost you an extra £20 at £139.99. As these particular examples are both overclocked cards fitted with enhanced cooling systems, they are priced higher than some competing RX 560 products.

Check out our roundup of the  best graphics cards for alternatives.

If you’ve look at Gigabyte’s Radeon RX 550 Gaming OC 2GB card, you’ll find the RX 560 versions look almost identical. The only obvious differentiator is the addition of a 6-pin PCI-E power connector on the RX 560 models which isn’t required on the lower spec cards. However, as you’ll see below, the second revision of the 4GB model ditches this power connector.

If you buy a version 1.0, you’ll need a PC capable of providing this extra power via a PCIe power connector.

The card comes with twin cooling fans which can be controlled via software to provide silent operation, maximum cooling, or anywhere in between. There’s no backplate installed and there are no fancy LED lights, but the card looks good and feels solidly built for the price.

The RX 560 costs a little more than the RX 550, but almost doubles the hardware specs in certain criteria. Based on AMD’s Polaris technology, it features 1024 stream processors, as compared to 512 on the RX 550, while both use 2GB or 4GB of 7Gbps memory via a 128-bit bus.

The RX 560 also doubles the number of texture units from 32 to 64 and comes with increased clock speeds. A stock RX 560 runs with a boost clock of 1,275 MHz, while this Gigabyte overclocked version runs at 1,300 MHz selectable via the included software.

The board comes with DisplayPort 1.4, HDMI 2.0 and DVI-D outputs, supporting high resolution outputs at high refresh rates on the latest displays. It also supports HDR, FreeSync and the latest APIs including DirectX 12, OpenGL 4.5, OpenCL 2.0 and Vulkan. 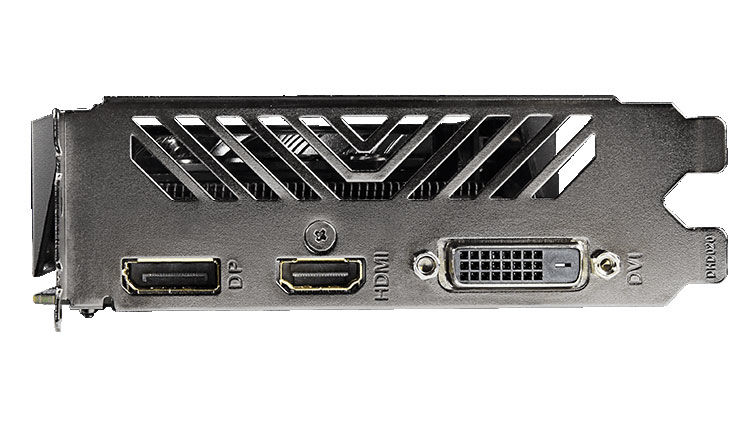 The latest version 2.0 of the 4GB RX 560 Gaming OC makes two very important changes to the original design, essentially making it an entirely different product from the original model despite retaining the same name. So be careful when ordering.

The v2.0 board does away with the 6-pin power connector, making it suitable for PCs with lesser power supplies that may not have such a connector available. This means you can now fit an RX 560 where you might have been limited to an RX 550 before.

However, this change comes at a significant cost in terms of performance. We haven’t tested the card but the official specs reveal that the clock speeds have been very much reduced in order to keep the power requirements low enough for the new physical design.

You will get a standard clock speed of 1,176MHz and an overclocked speed of 1,234MHz, meaning this board is slower in OC mode than a normal RX 560 running at stock speeds.

Both versions of the card cost the same, with the v2.0 model eventually replacing the original, so if you want a fast card make sure you get the original version.

More than fast enough for e-sports and quick enough to venture into AAA gaming, the Radeon RX 560 performs well for the money and delivers a sizeable jump in performance from the lower-priced RX 550.

3D Mark scores show it to fit somewhere between Nvidia’s GTX 1050 and GTX 1050 Ti boards, which is also where it sits in price (depending on overclocking options and other enhancements which can push the price up or down).

The Gigabyte boards tested here are overclocked by default, but can also run at stock speeds when Silent Mode is selected. This gives you the ability to choose between silent operation or maximum performance as you need it. It also shows us how a standard board might perform without the factory overclocking.

Moving on to real world gaming, the overclocked RX 560 easily exceeds 60 fps in Alien Isolation at 1080p with Ultra quality settings, and averages 46 fps when the resolution is increased to 1440p.

Deus Ex Mankind Divided, on the other hand, proves much more of a challenge with 60 fps only achievable at 720p in low quality settings. Switching to 1080p Ultra sees average performance dropping to 23fps, so you’ll need to drop the quality settings in order to get a playable 30fps out of it.

Dropping to silent mode results in a performance drop of about 2-3 percent in most cases, which doesn’t seem like much but sometimes just a couple of extra frames per second are all that’s needed to make a particular quality setting perfectly smooth.

The difference between 2GB and 4GB versions is a little more interesting. Generally, the lower the spec of the graphic card, the less value there is to be had in having a larger memory capacity.

With the RX 560 the difference can be measured, especially in synthetic benchmarks like 3DMark Time Spy where the extra 2GB provides a 36 percent performance boost, but in real-world gaming the differences are mostly found at very high resolutions and quality settings were neither version of the card is fast enough to be playable.

For example, the v1.0 4GB board offers more than double the performance of the 2GB version in Deus Ex Mankind Divided if you switch to 4K Ultra quality, but it’s simply not playable on either card. Where it does make a useful difference is in the switch from High to Ultra quality settings, where the 4GB model will generally slow down less than the 2GB version.

The 4GB model obviously offers more future-proofing against future games which may be more demanding on video memory. When the 4GB model can sometimes be found for only £10 extra, it may well be a good idea to go for it. As we’ve said, just make sure it’s a revision 1.0, and not a v2.0.

The RX 560 offers good performance for the money and can play more demanding games than the cheaper RX 560, but also take a look at boards based on the Nvidia GTX 1050 which will deliver a little more performance in some games and a little less in others.

If you’re looking at the more expensive end of the RX 560 price range, you should also consider the Nvidia GTX 1050 Ti which can deliver a noticeable step up in speed in many situations. As always with graphics cards, shop around and compare as many prices as possible while paying attention to clock speeds and cooling options.