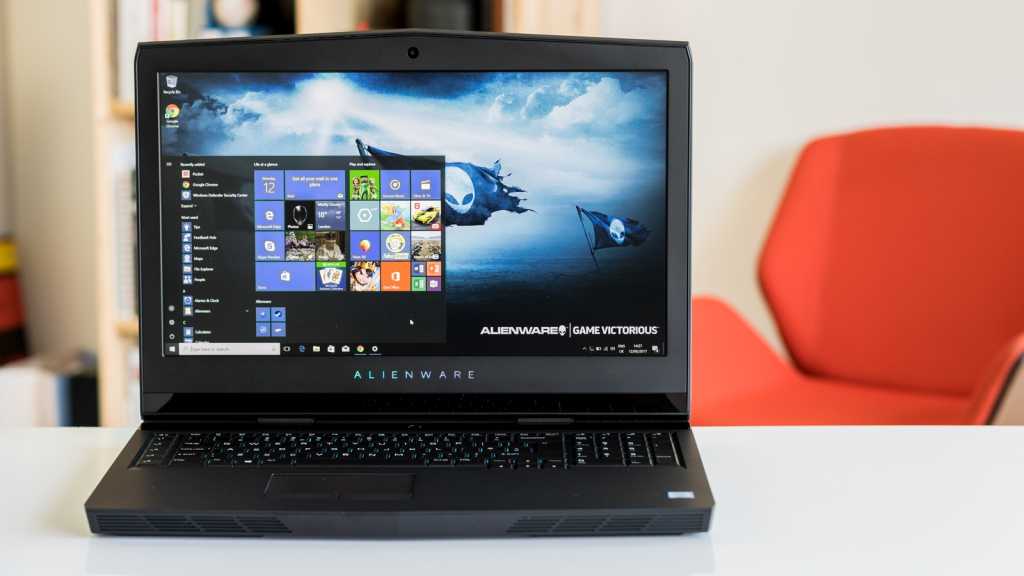 There’s no doubt that the Alienware 17 R4 is one of the most capable gaming laptops we’ve seen, making easy work of our CPU and GPU benchmark tests and providing generally smooth gameplay. The design is eye-catching too, sporting a flurry of customisable LEDs across the body of the laptop, although it’ll never look as sleek and attractive as a MacBook Pro. But while the Alienware 17 R4 is a powerful beast, it’s not perfect; it gets hot and loud fairly quickly, it’s heavy at over 4kg and we feel like it should feature one or two more USB ports, especially when boasting VR compatibility. And while it is incredibly powerful, our build was incredibly expensive too.

Alienware is one of the best-known brands when it comes to gaming rigs, manufacturing high-end gaming PCs and laptops. One of the latest additions to the 2017 line-up is the Alienware 17 R4, a 17.3in gaming laptop that looks to pack a punch.

But how does it perform in real life? We’ve spent some time with the Alienware 17 R4, and here’s what we think.

Dell sent us an even more expensive model fitted with an 8GB Nvidia GeForce GTX 1080, 16GB of RAM and an Intel Core i7 processor among other upgrades. You can find our specific build on the Dell website for £2,697. Phew.

As with most gaming laptops, the Alienware 17 R4 has a metal finish on the lid with a largely plastic body, although the keyboard surround is covered in a matte-like finish for a more premium look.

But while no gaming laptop will ever look as sleek as a MacBook Pro or Surface Pro, the Alienware 17 R4 is eye-catching thanks to its use (or arguably over-use) of LED lighting.

In addition to the backlit keyboard and trackpad, almost every area has some kind of LED lighting, from strips down the sides of the laptop to the illuminated power button. Even the logos on both the front and rear can be customised to fit your colour scheme!

It’s all completely customisable via the Alienware FX app that comes pre-loaded on the laptop too, meaning you can change the colour depending on your mood, task or just because you want a change.

But while the LEDs change colour, the laptop itself is offered in one colour: Epic Silver. It looks decent enough, but we’d have loved to have seen an all-black colour option to really make the LEDs pop.

After all the lighting, the next thing you’ll notice is the whopping 17.3in display. It’ll seem fairly imposing if you’re used to an 11- or 13in laptop, and the general thickness and weight don’t help either.

It’s a bit of a beast, measuring in at 424mm x 332mm x 29.9mm and weighing a hefty 4.42kg, making it a bit heavy and awkward to carry around – in fact, a laptop bag designed for 17in laptops couldn’t accommodate the Alienware 17 R4. Moving from room-to-room shouldn’t be too much of a hassle, but we’d avoid taking this on trips or on holiday with us.

Of course, that extra bulk also means that there’s space for multiple fan outlets to keep the gaming laptop cool in those intense gaming sessions.

If north of £2.5K is too painful on your wallet, then consider you can buy a  gaming PC with similar specs for a lot less. Unless you really need the portability (and the R4 isn’t even that portable) then you’ll also benefit from a PC’s upgradability, too).

While the Alienware 17 R4 doesn’t feature an optical drive, it’s not really a surprise. Many modern laptops have ditched the optical drive as downloading via the internet is the new norm – it’s certainly the case with online gaming, anyway.

On the rear is where you’ll find the majority of the ports; from left to right, you’ll find a Gigabit Ethernet port, Mini-Display Port 1.2 output, HDMI 2.0 output, a Thunderbolt 3 port, an Alienware Graphics Amplifier Port and a power port.

Interestingly there’s no Type-A USB 3.0 port on the rear, making connecting VR headsets that require both a HDMI output and USB output a little bit awkward.

On the right, you’ll find a single Type-A USB 3.0 port and not much else – why not include another USB port? Especially when you consider that the Oculus Rift with Oculus Touch controllers requires three USB 3.0 ports and the Alienware R4 17 only has two, an odd move for a VR-ready laptop.

As the name suggests, the Alienware 17 R4 packs a whopping 17.3in display and while that’s a little large for a full-HD display, the sample we’ve looked at features a 1440p (2560×1440). The Quad HD resolution of the screen makes everything look a far more crisp and detailed, a must-have for a high-end gaming PC.

Specifically, the Alienware 17 R4 features either an IPS display or a TN LCD display, both with a matte finish to help negate reflections of lights and other objects. Ours has the TN panel which has a 120Hz refresh rate and support for Nvidia’s G-Sync technology, offering tear-free gameplay.

The quality of the display itself is good with bright, vibrant colours.

To be specific, the Alienware R4 17 performs pretty well, offering 93 percent coverage of the sRGB standard and 72 percent of Adobe’s RGB standard. For context, the similarly priced 17.3in Asus Rog G752VM managed only 85 percent and 62.5 percent respectively.

While it may not be perfect for video editors and graphic designers, it should be more than enough for gamers, and this is a gaming laptop.

Our colourimeter recorded a maximum brightness of 372.4 cd/m2 – anything over the 250 mark is generally plenty for indoor use.

If there’s one chink in the armour it’s contrast, which isn’t wonderful. Again, our Spyder5Elite recorded only 460:1, meaning blacks lack the deep inkiness you might be used to on your phone’s AMOLED screen.

How? It can make your in-game UI less cluttered by only displaying the UI when you look in that general area, along with other game-specific benefits like aim assist, although support for Tobii’s eye-tracking technology isn’t universal – you can see a complete list of supported games here.

It also brings benefits to the standard Windows 10 experience with features like auto dimming where the display automatically dims when you look away and turns back on when you look back. While it’s a little gimmick-y, it could help improve the battery life of the laptop somewhat.

With a large 17.3in display, the Alienware 17 R4 manages to squeeze in a standard-sized Alienware TactX keyboard. While there is slight resistance when pressing down on the keys, the keys themselves are quite shallow – a common complaint with laptops – but we still found it to be comfortable enough to game and work on.

Due to the available space, the Alienware 17 R4 also features both a full numeric keypad and nine programmable buttons, allowing for up to 19 customisable functions per app or game.

It features multi-colour RGB backlighting, fully customisable via the built-in AlienFX lighting controls. You can program specific keys to be a specific colour or even create patterns across the keyboard. If you’re like us and not very creative, you can also load up a range pre-made designs from the app, or you can download more online.

The lighting itself is very even, although not the brightest we’ve seen. When combined with the built-in Tobii eye-tracking hardware, it can brighten the area of the keyboard that you’re looking at. While we’re not so sure that this brings anything to the table in terms of performance, it’s a cool feature that you can show to your friends.

The keyboard isn’t the only area that’s backlit, as the trackpad also features LED backlighting. The colour and brightness is fairly even, although you can see a line of brighter light (where we imagine the illumination is coming from) between the trackpad and integrated buttons.

The trackpad is also a little on the small side, especially when you consider just how large the laptop is, although most gamers will opt for a plug-in mouse for gaming sessions.

The Alienware 17 R4 is a beast in terms of its spec – although it’s worth bearing in mind that our sample is at the top-end of what the R4 offers, and lower spec’d variants may not perform as well.

Our sample boasts 16GB of DDR4 RAM coupled with not only a 256GB SSD for super-fast performance, but also a high-speed 1TB 7200RPM HDD for file storage. Games run on the SSD will be much faster than those stored on the HDD, although the high RPM means it’ll perform better than a standard HDD.

It’s a similar story with the CPU, featuring Intel’s latest (seventh generation) quad-core i7-7820-HK CPU clocked at 2.90GHz, overclocked up to 4.4GHz. It’s incredibly capable and is more than enough for the likes of video editing along with gaming, scoring an impressive 13,148 in Geekbench 4 and 3812 in PCMark 8.

Moving beyond the CPU, our sample of the Alienware 17 R4 features Nvidia’s latest GeForce GTX 1080 with 8GB GDDR5X VRAM and when coupled with the above, provides decent benchmark results.

First up, we ran the benchmark built into Grand Theft Auto 5. It runs at a 125fps at 1080p with the ‘high’ graphics preset and post-processing, down to 56fps when running at 1440p with ultra post-processing effects and ‘very high’ graphics preset. While it’s not quite 60fps when running at native resolution, most people won’t notice the difference between 56- and 60fps when gaming.

Ghost Recon: Wildlands is one of the most visually impressive games we’ve ever seen and demands more graphical power than most other games out at the moment – the ultimate test for the Alienware 17 R4 and its Nvidia GTX 1080 GPU. Running Wildlands at 1080p with ‘high’ graphic settings, it managed an average of 96fps, while that number dropped down to 67fps when running at 1440p with ‘very high’ graphics settings.

While it may seem disappointing at a glance, it’s worth bearing in mind that Nvidia’s GTX 980 only reaches around 59fps at 1080p with ‘high’ graphics settings in Ghost Recon Wildlands. Besides, many games don’t require that kind of power and if they do, turning the resolution down or tweaking the graphics settings should provide a boost in performance.

It’s also more than enough for VR as we ran a number of VR games on the Oculus Rift and experienced no kind of lag, even with graphic options turned up to max.

Beyond the graphical performance of the laptop, there’s a single issue: noise. While the Alienware 17 R4 is generally quiet when browsing the web and listening to music, that quickly changes when you start gaming.

The fans have to work hard to keep the high-end internals cool and that equates to a rather distracting hum. The laptop does get hot fairly quickly when gaming too, although not hot enough to worry – just make sure you keep it on a table and not your bed or lap!

Read next: Best upcoming games of 2017

With such powerful components within the Alienware 17 R4, it should come as no surprise that it’s not the greatest we’ve ever seen when it comes to battery life.

When using the laptop to browse the internet, use Microsoft Office and listen to music, we’d get between two and three hours on a single charge – although this would depend on the status of the LEDs and what you’re doing as when gaming, you can expect around half of that. It’s clear that this isn’t designed to be a portable machine.

We’ll be running our battery benchmark in the coming days, and will update this section accordingly.