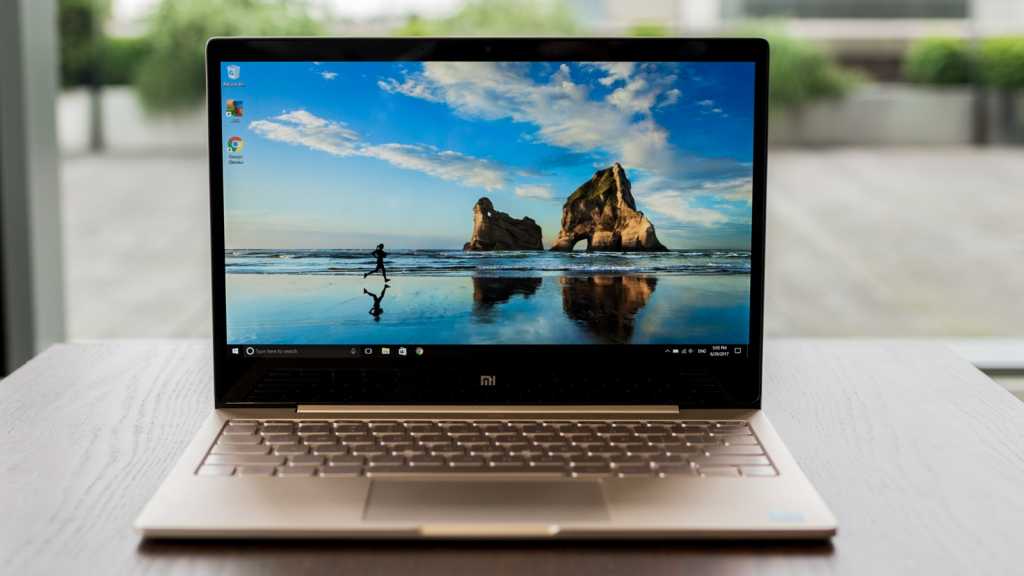 Though it might be nearly as expensive as its more powerful sibling, the Mi Air 12 wins on portability and battery life. It’s a great-looking budget laptop that could easily be mistaken for a MacBook, with astonishing startup times, capable performance and a great screen. Our main concern is that it comes preinstalled with the Chinese edition of Windows 10 Home, which really will be a problem for UK users. This is fixable, but at additional cost.

Xiaomi’s Air 12 is little brother to the Air 13 we previously ran through the Tech Advisor Test Centre, with just 0.8in difference in screen size but some £120 in price. We discuss whether or not the Mi Air 12 is worth your money in our review. Also see: Best budget laptops 2017

Until the end of July you can get the Xiaomi Air 12 significantly cheaper – just £358.85 – from GearBest with the coupon code KAir12L.

Do note that prices can fluctuate on this site, and that in addition to this cost you will likely be asked to pay import duty. This is calculated at 20 percent of the value on the shipping paperwork, plus an admin fee of around £11. ( Read more buying advice on Chinese tech.)

We received the gold model for review but the Mi Air 12 is also available from GearBest in silver, with the same specification.

The Mi Air 13, meanwhile, is currently available for £610.83 at GearBest, putting around £120 difference in price between these two models.

A major drawback with both Mi Air laptops is that they ship with the Chinese version of Windows 10 Home. You can make some tweaks in the Settings to set them up for UK use, but the only way you’ll get rid of the Chinese-language labeling once and for all is to reinstall a fresh copy of Windows 10 at additional cost.

You can buy a Windows 10 USB flash drive installer from Amazon for £75.

On paper, there are several differences between the two Mi laptops and, at first glance, it would be easy to assume the Mi 13 is by far the better deal.

By comparison the Mi Air 13 has a 13.3in screen, an Intel Core i5 processor with Intel HD 520 integrated graphics and a dedicated Nvidia GeForce GT 940MX graphics card, 8GB of LPDDR3 RAM and double the storage capacity at 256GB.

Additionally you get a second USB 3.0 port, which will make it easier to simultaneously use both a portable hard drive (neither laptop has an expansion slot) and an external mouse. To do this on the Mi Air 12 you would need to purchase a USB hub that can turn one port into several.

Surprisingly the difference in performance is not as great as you might expect, though the Mi Air 13 is the faster of the two and will certainly be your first choice if you want to play any games on the laptop. We’ll speak in greater deal about performance later on in this review.

At under £500 we would class this Xiaomi laptop as a budget device, and yet its premium design is way out of that league. It could be easily mistaken for a MacBook, thanks to its full aluminium shell and super-slim screen bezels that cut down on the Mi Air 12’s overall size.

The lid is devoid of logos, which we really like. A smooth metal surface with clean lines and rounded corners. It’s wonderfully thin for a budget laptop at 12.9mm, and easily portable tipping the scales at just over a kilo. A small groove on the front edge of the bottom of the laptop makes it easy to lift up the lid using a single finger.

A Mi logo is found on the inside just under the display, which sees protective glass spanning edge to edge. At the top is a 1Mp webcam, which you’ll barely notice but will come in useful for video chat.

This is a 12.5in fully laminated IPS display, which means it produces excellent viewing angles and realistic colours. The full-HD resolution is crystal clear, without making screen icons too small to easily use, while the 16:9 aspect ratio is a perfect fit for video playback.

There’s nothing here in the way of the usual rubber bumpers to prevent the screen glass rubbing against the keys. Instead Xiaomi has placed the keyboard inside a shallow recess, making for a flat design top and bottom. It makes for a much more attractive end result.

The screen lays back – not entirely flat, but enough to make use on either a desk or your lap possible. It will get warm in use, but not so hot as to cause any harm. See all laptop reviews.

If we could fault the Mi Air 12’s screen in any way it would be the glossy surface, which might make outdoor working an issue due to glare. We measured the maximum screen brightness at 300cd/m2.

Flip over the Mi Air 12 and you find speaker grilles either side. Inside are AKG stereo speakers with Dolby Audio Premium Surround Sound. Audio is much better from this laptop than many we’ve seen, though we’d prefer to have sound firing out toward us than into the desk on which it sits.

Along the edges you’ll find a 3.5mm headphone jack, full-size HDMI 4.1, a single USB 3.0 output and a USB-C port that is used for charging the device. Unless you have a high-output power bank or charger you will need to use the included power supply, which has a US two-pin plug. GearBest will be able to send you an adaptor on request.

Notably missing are ethernet, which is becoming increasingly rare on ultraportable laptops, though you do get 802.11ac Wi-Fi and Bluetooth 4.1, and a storage expansion slot. Given that there’s only 128GB of storage inside the Mi Air 12, you’ll likely want to make use of the cloud or an external hard drive if you want to store a lot of large files, such as photos and video.

The Mi Air 12 has a large and responsive trackpad, centrally situated below the keyboard with integrated left- and right-click buttons. In the past when reviewing Chinese laptops we’ve found this is a prime area for cost-cutting, and have often resorted to using a USB mouse. Here you’ll have no problems whatsoever – the Xiaomi’s trackpad was a pleasure to use.

It comprises well-spaced flat-tile keys, which are very quiet in use. These are backlit to aid working in low-light situations, though you can switch this off by tapping F10. As you’d expect from a 12.5in laptop, there’s no room for a separate numberpad, but the only keys that suffer somewhat from the reduced size available is Page Up and Page Down – if you don’t use these all that often you likely won’t care.

This entry-level Xiaomi ultraportable laptop uses low-power core components. It’s not a workhorse, and you’ll likely be able to find faster performance at this price – particularly in games. However, battery life is commendable, and we were astonished by how quickly the Mi Air 12 starts up – it’s ready to use in just a couple of seconds.

The specifications include a processor from last year’s Intel Skylake family, a Core m3-6Y30 dual-core processor that’s clocked at just 0.9GHz but can boost up to 2.2GHz. It integrates the Intel HD Graphics 515, and is paired with 4GB of LPDDR3 RAM.

Web browsing, email, social media and even watching videos is well within this laptop’s capabilities.

We ran it through our benchmarks and found surprisingly good performance. And, as we mentioned earlier, the gap between this and the Mi Air 13 wasn’t as high as we had expected – at least for core processing tasks.

In the PCMark8 Home test this Xiaomi scored 2309 points while its bigger brother managed 2810. And in Geekbench 4, whereas the Mi Air 13 recorded 6077 points (around the same sort of level as a flagship phone), this little beauty didn’t lag too far behind with 5350 points.

We also put the Mi Air 12 through our usual GFXBench onscreen graphics test, where it recorded a playable 79fps in T-Rex, 43fps in Manhattan, 32fps in Manhattan 3.1 and 21fps in Car Chase. Task it with anything more intensive and it will struggle, however.

We ran both laptops through our video-looping test, which involves setting the screen brightness to 120cd/m2 and running a video on a loop until the machine turns off. The larger Mi Air 13 managed 7 hours, but this Mi Air 12: 9 hours 57 mins. Also see: What’s the best laptop 2017?