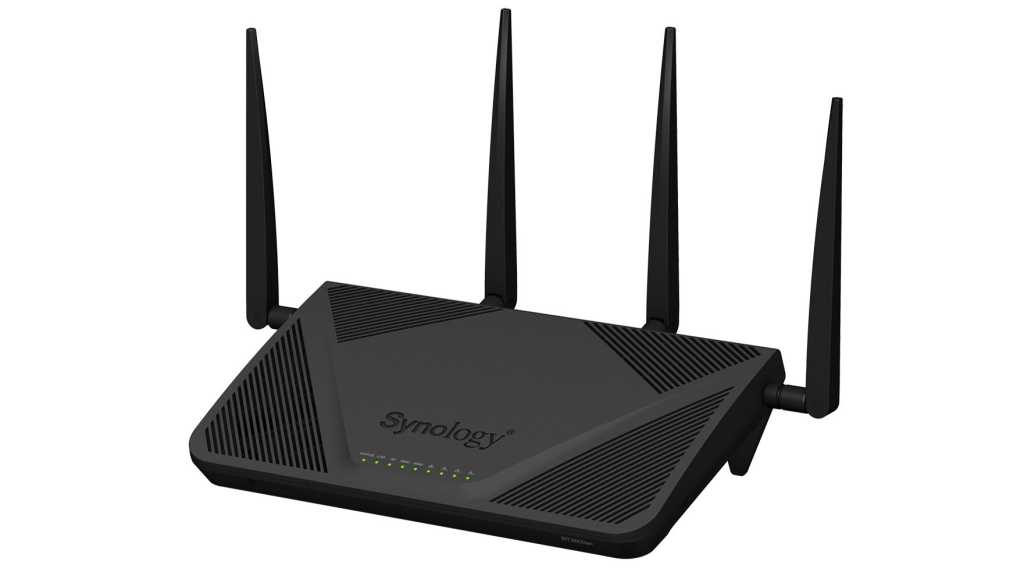 Synology has approached the router with the same design ethic as their excellent NAS range, and the RT2600ac is the stunning result. Where other router makers talk-the-talk of security, flexibility and performance, the RT2600ac unequivocally delivers on those words.

Synology diversified from its highly successful NAS range into routers in 2016, with the RT1900ac. While not considered especially rapid this first-gen product wasn’t an entirely disappointing first try that was significantly better than some other hardware maker’s early efforts.

Building on that start, the RT2600ac model boasts more bandwidth, better chip technology and Synology’s unique approach to firmware development. But, for a 2600ac specification router, this is also rather expensive. So is it worth the extra money over the many competitive designs?

If you’re after something more affordable, check out our round-up of the best routers of the year.

As routers go, the Synology 2600ac offers a modest aesthetic that hasn’t had its teeth capped with gold, metaphorically speaking.

Its textured black plastic façade is tasteful and business-like while providing effective cooling vents on both the lower and upper surfaces. A pair of fixed feet at the rear creates a sharp rake that makes sure that air can always flow under it, even if you wall mount it.

Around the back are the power button, a single Ethernet WAN port (for connection to cable router), four 1000/100/10 LAN ports and a single USB 2.0 port, with a further USB 3.0 port on the left side along with an ‘eject’ button. On the right side are two buttons, one that disables WiFi and another that sanctions WPS. Not sure about that placement, given how annoying it can be to press the wrong button.

The only other external features of note are the four antennas mounted on the rear and sides and centrally positioned indicator lights. The aesthetic impression is one of a device made for a specific purpose, and not as an artistic statement.

Where the RT2600ac shines, however, is inside.

Many minds, one thought

At the heart of Synology’s NAS success is its DSM operating system. Built from Linux, it offers a flexible Windows-style web interface that allows you to customise your mini-server with a vast array of installable applications. Great, but this isn’t a NAS box, surely?

True, but the SRM operating system that Synology used in the RT2600ac is a close relative of their DiskStation DSM, and offers much the same functionality. 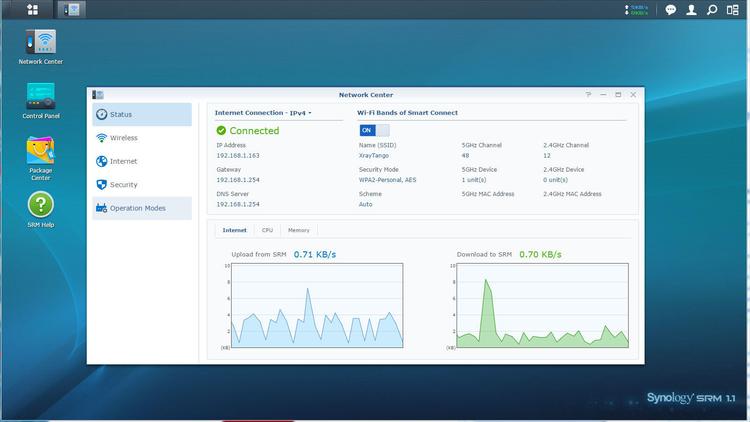 Using SRM is more like accessing a computer than any router interface you’ve seen before, but the critical feature that SRM inherited was the ability to install applications.

At these times there are just 7, but given Synology’s track record that number should expand in the way that the app collection on their NAS boxes has blossomed.

These include a torrent client, DNLA/UPnP service, a cloud synchronisation app, Radius Server, DNA Server, Intrusion Prevention tool, and two VPN servers. And, you can install whatever you want, and ignore the rest. 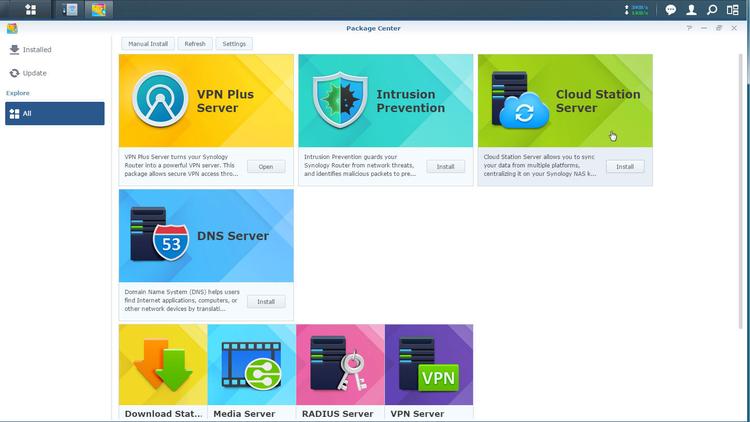 The upshot is that along with being a cable router, Wireless access point or repeater, the RT2600ac can also be a basic media server (with attached USB storage), a powerful VPN server, or potentially anything you need it to be.

This one feature alone is worth the extra cost of this hardware; we’d contest. And especially if you were thinking of buying a separate NAS – it makes the RT2600ac seem like excellent value.

One stand-out feature of this design is that one of the standard LAN ports can convert into an additional WAN function. Why would you do this? 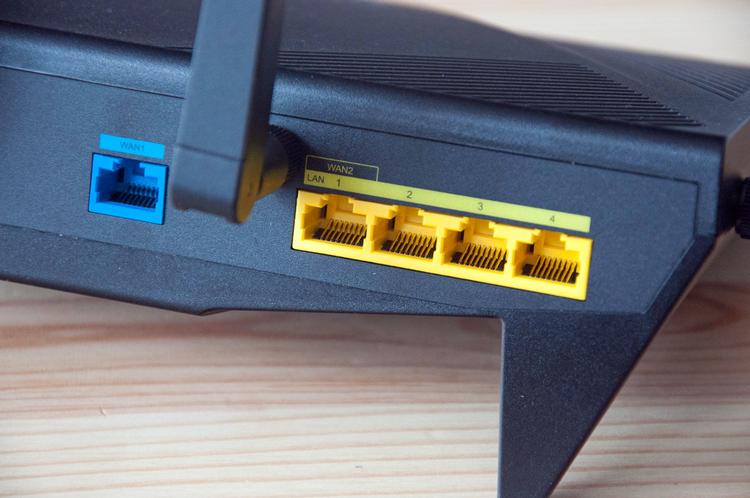 The primary justification is for those mission-critical customers who have invested in a backup means to access the Internet. Having dual WAN ports allows the connection of two, ideally independent, broadband services and enables the router both load balance and fail-over if one of them malfunctions.

The only trick that Synology missed here was not including the ability to channel bond the LAN ports too, because that effectively caps the top speed that the Wi-Fi can deliver from a source bottlenecked by a single gigabit LAN port to the server.

The only snag in doing this is that if you use Dual WAN mode then you’re very short of LAN ports (just three) to begin with, so Synology needs to consider including more than four in subsequent designs. As it is, you’ll have to invest in an Ethernet hub or switch.

Wireless performance was top drawer on 5GHz, though less wonderful on 2.4GHz. Short range on 5GHz is especially potent, with over 700 Mbps achieved in the same room. That it could maintain more than 450Mb/s with a very solid wall between the router and test laptop was especially impressive.  The 2.4GHz frequency could only manage about 250Mb/s, though with a greater range.

Bland 2.4GHz performance is something we’ve repeatedly seen in routers based on the latest Broadcom chippery, so Synology might not be to blame on that front. 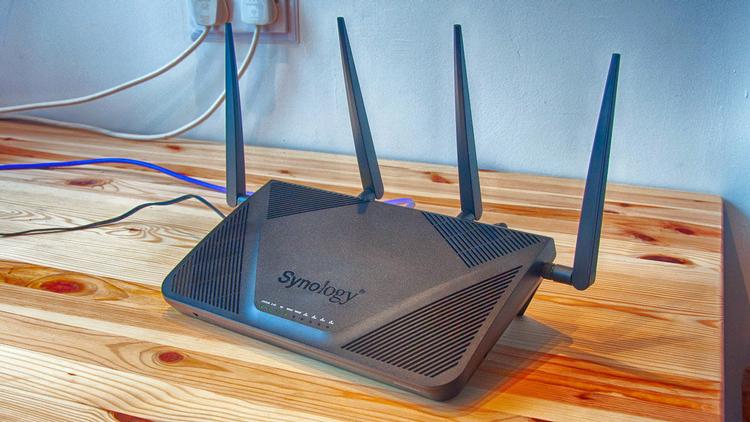 There is provision for a guest network, for those that don’t like handing out keys, and the encryption supports Enterprise WPA2 for enhanced security. For those looking to squeeze the very last out of 802.11ac bandwidth, the RT2600ac also offers DPI (Deep Packet Inspection), and live monitoring of connections that goes well beyond the usual QoS (Quality of Service) features.

The RT2600ac is also one of the very few routers we’ve tested where the use of blue to designate the USB 3.0 is truly justified. Using a high-speed USB flash key read speeds of 73MB/s and write speeds of 32MB/s were possible, a significant improvement on the typical USB 3.0 we’ve seen elsewhere.

The only catch to using this facility is that by default the RT2600ac will downgrade the USB 3.0 port to USB 2.0 mode to protect 2.4GHz performance, as it interferes. You can disable this in the SRM interface if you accept that 2.4GHz connections might suffer.

Overall, this is a whole new standard for what you might reasonably expect from a router.