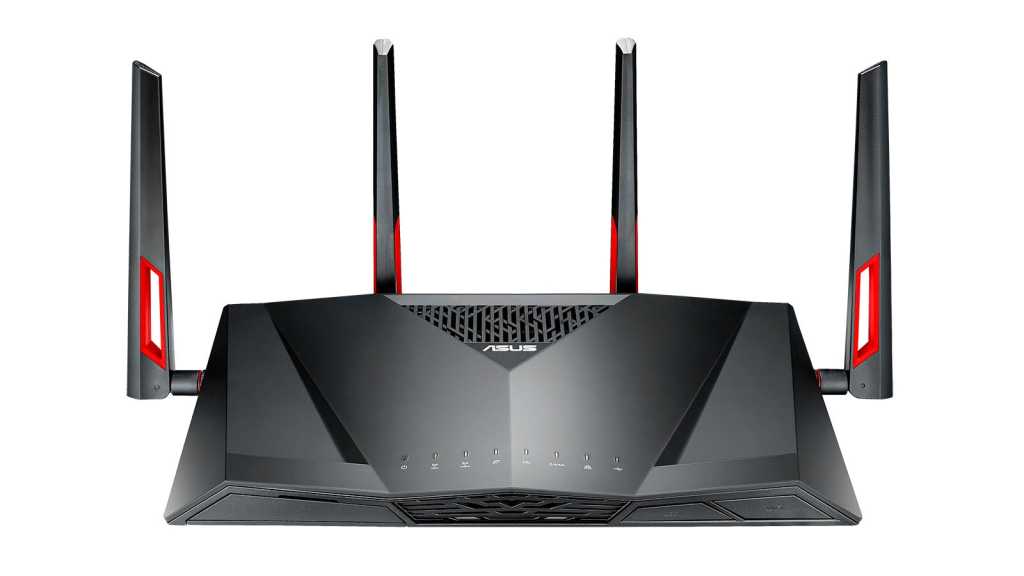 While not cheap, the Asus DSL-AC88U manages to deliver the key wireless, LAN and broadband connectivity in a highly effective one-size-fits-all package. It’s far superior to the typical router that Broadband suppliers provide, and ideal for any household that uses Wi-Fi extensively.

Late in 2015, Asus launched the RT-AC88U, a cable router that impressed many reviewers. The sticking point for that design was the price, the RRP being a whopping £364. The cheaper option for ADSL users from Asus was the DSL-AC68U.

There was another pricey derivative design, the RT-AC3100, and externally the DSL-AC88U looks almost identical to that router. Inside however, there are some significant improvements.

The most critical enhancement is that this design incorporates an ADSL modem, allowing it to be a drop-in replacement for anyone using ADSL2, VDSL2, VDSL or the new vPlus and G.fast connections.

As it also has a WAN Ethernet port, it is also ideal for those who are considering a switch from DSL to cable or vice versa, as the DSL-AC88U can do either with equal aplomb.

With other router makers avoiding delivering their best specification devices with an ADSL modem option, is the Asus DSL-AC88U ready to fill that void?

The pricing of this router at roughly £200 reflects the high specification and functionality on offer, though it’s cheaper than its RT-AC88U sibling.

A few online retailers are offering it for a little less, with the cheapest being £199.99 from Amazon.

It’s worth noting that you can still find the RT-AC88U and RT-AC3100, though both of these options lack the internal modem and they still cost more.

There are cheaper alternatives, of course, so check out our chart of the best routers.

Like so many of the dual-band router designs circulating today, the DSL-AC88U is hardly inconspicuous.  The case is 30cm wide, 18cm deep and four uniquely styled antennas that are could easily be the basis of an especially scary Halloween costume. 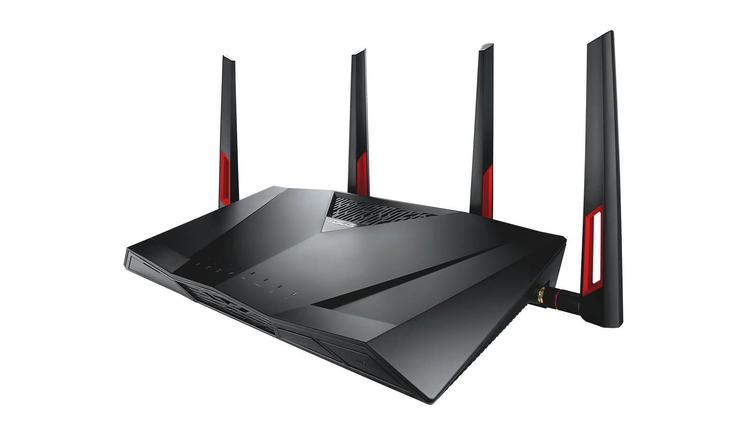 But they’re not included for the visual impact but organised to provide the best connectivity available in this dual-band AC3100 configuration.

The theoretical performance ceiling for this hardware is 2.167 Mbps on the 5GHz frequency range and a further 1,000 Mbps on the 2.4GHz spectrum.

It’s important to note that achieving these performance levels in the real world is practically impossible, though at short range and with a good quality ‘ac’ specification adapter, you can grab a decent chunk of the potential 3,157 Mbps on offer.

It’s also important to note that the true strength of 802.11ac isn’t the maximum performance levels, but its ability to manage multiple devices and provide workable levels of bandwidth to all of them. Therefore this specification is built to handle a wide family of wirelessly connected devices, not just a couple of phones and the odd PC.

That’s a superior processor to its predecessors combined with the same excellent Wi-Fi technology.

The wireless credentials of this router are therefore well-founded, and it also provides a single box solution for those using ADSL and its derivatives. That’s a choice that many other router brands appear unwilling to offer, assuming that customers will buy a cable router and use an ancillary ADSL modem alongside. 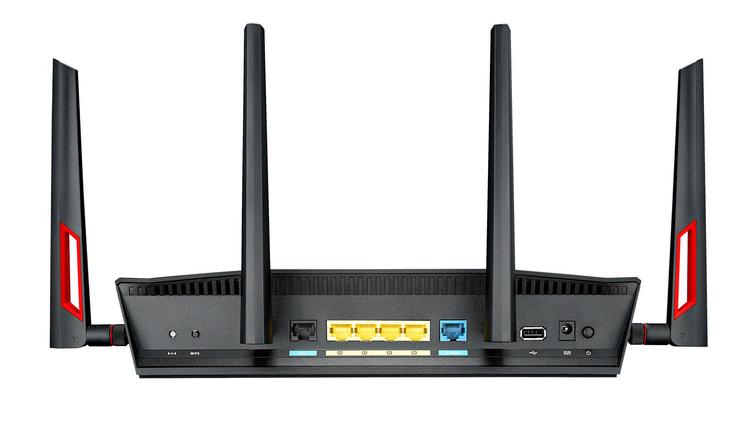 Reviewers of the RT-AC3100 complained about the placement of the USB ports, and the Asus didn’t address that flaw. They put one on the rear and the other hidden under a secret door at the front, but got them the wrong way around.  The USB 3.0 specification port is on the front confusingly, rather than at the rear where you’d normally leave something permanently attached.

The performance of these USB ports also isn’t great. Even the USB 3.0 one delivers speeds we’ve seen exceeded under the best USB 2.0 conditions.

However, where this hardware genuinely excels is in respect of its broadband capabilities, this being a top tier Wi-Fi implementation.

The inclusion of G.Fast with potential speeds up to 900Mb/s, even if most broadband suppliers are only implementing 330Mb/s with their initial roll-outs. It’s a cliché to describe this as ‘future-proofed’, but realistically G.Fast technology isn’t likely to be superseded for domestic Broadband users anytime soon.

The same true is also if the 802.11ac class Wi-Fi on offer here, because Broadcom NitroQAM (1024-QAM) does boost connectivity, up to 25 percent when multiple devices simultaneously make demands on the available bandwidth. Using 802.11ac 5GHz connections the bandwidth available is 1734Mb/s, where using 1024QAM on 5GHz yields up to 2167Mb/s – in theory.

In testing at 5GHz connection speeds of more than 80Mb/s (640Mbps) for a file transfer were common at short range, approaching the limitations of the serving end of the solution, if not the practical limits of gigabit Ethernet. And, with the antenna arrangement and bandwidth pool, it can handle multiple devices at these speed levels simultaneously.

It might seem a minor buff, but 1024QAM technology also reduces latency in a way that will please wirelessly connected gamers.

With quad antenna MIMO connectivity, this design can work well with older ‘n’ class adapters and can exploit 802.111.ac technology for those that can use that.

Another plus point is the high quality of the modem. In testing on BT Infinity 2 service, using the DSL-AC88U as a replacement for the BT SmartHub yielded an extra 5Mb/s download speed, boosting from 35Mb/ss to 40Mb/s simply by plugging it in.

It also sports a web-based interface that’s packed with useful features and controls, allowing you to configure the router in many subtle and useful ways.

Asus has even invested time and effort in developing personal cloud functionality, called AiCloud 2.0. Unsurprisingly, this allows you to access data from storage devices attached to the router from any PC, iOS or Android device connected to the Internet. 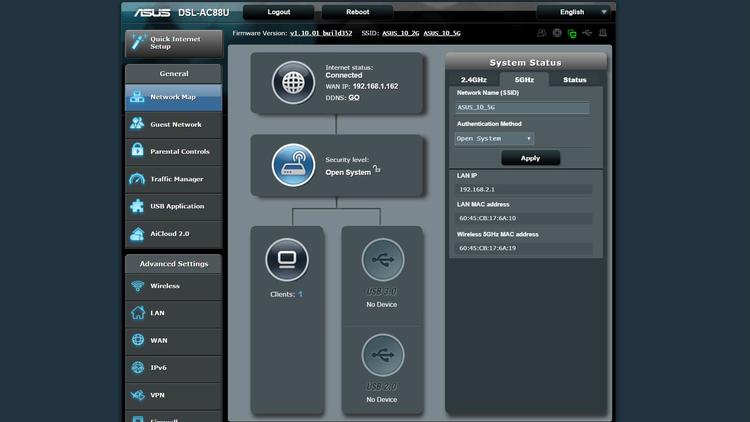 Our reservations about using AiCloud are its proprietary nature and its reliance on the included USB ports. While the DSL-AC88U can be configured as a basic NAS service, that’s certainly not a strong point of the design.

A small caveat that you need to be aware is that some units, including the review hardware, came set to German as the default language. Unfortunately, you can’t get to the language change part of the interface without completing initially set-up, in a language you may not speak. The latest firmware fixes that issue, if you can install it.