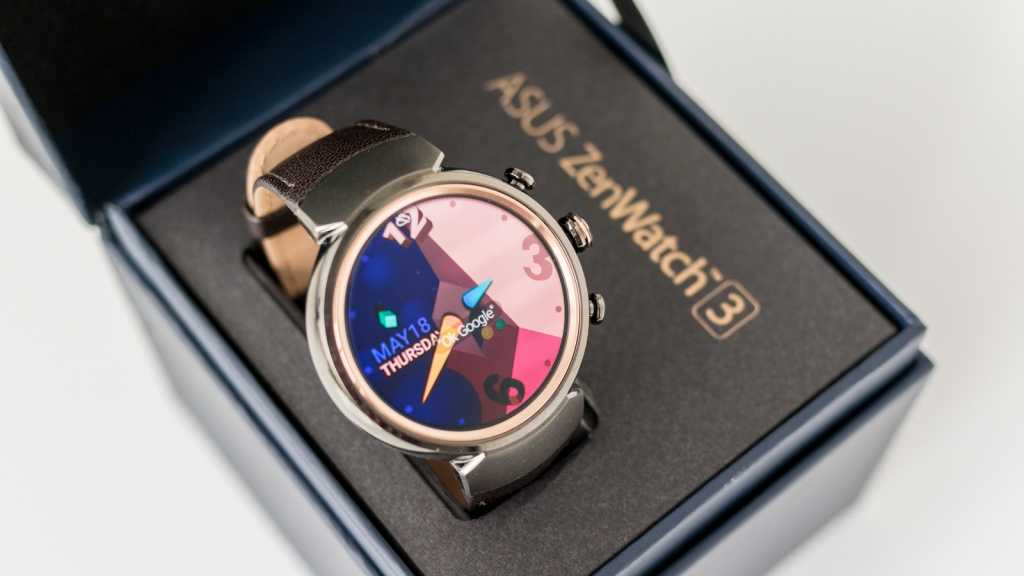 The Asus ZenWatch 3 is a gorgeous smartwatch – and one of the slimmest – but there are shortcomings to the circular smartwatch. It’s limited in terms of fitness tracking, measuring only steps and standing hours and offering tracking for only basic exercises due to the omission of GPS and a heart-rate tracker. Its performance is sluggish (and that’s being kind) and things go downhill when you update to Android Wear 2.0. Battery life is also poor with the new software. Until Asus can fix these issues, you’re better off spending more on a rival such as the Huawei Watch 2.

With the ZenWatch 3, Asus ditched the rectangular display from previous models for a traditional circular display.

Focusing more on design than features, the ZenWatch 3 appeals to a more fashion-conscious audience – but what is it like on the wrist?

Note: Android Wear 2.0 is now available for the Asus ZenWatch 3 in the UK. We’ve updated this review with our experiences of the new software.

The ZenWatch 3, despite its high-end, luxurious look, costs £249 in the UK. While that may seem expensive, it’s worth bearing in mind that the likes of the Apple Watch Series 3 costs £329 as does the Huawei Watch 2, although they offer features that the ZenWatch 3 lacks – but we’ll come to that below.

In fact, if the Asus ZenWatch 3 is comparable to any smartwatch on the market at the moment, we’d align it with Fossil’s £249 second-generation Q Marshal, offering both a similar look and similar features.

You can buy the Asus ZenWatch 3 from Amazon in the UK, but also check out the  best smartwatch deals 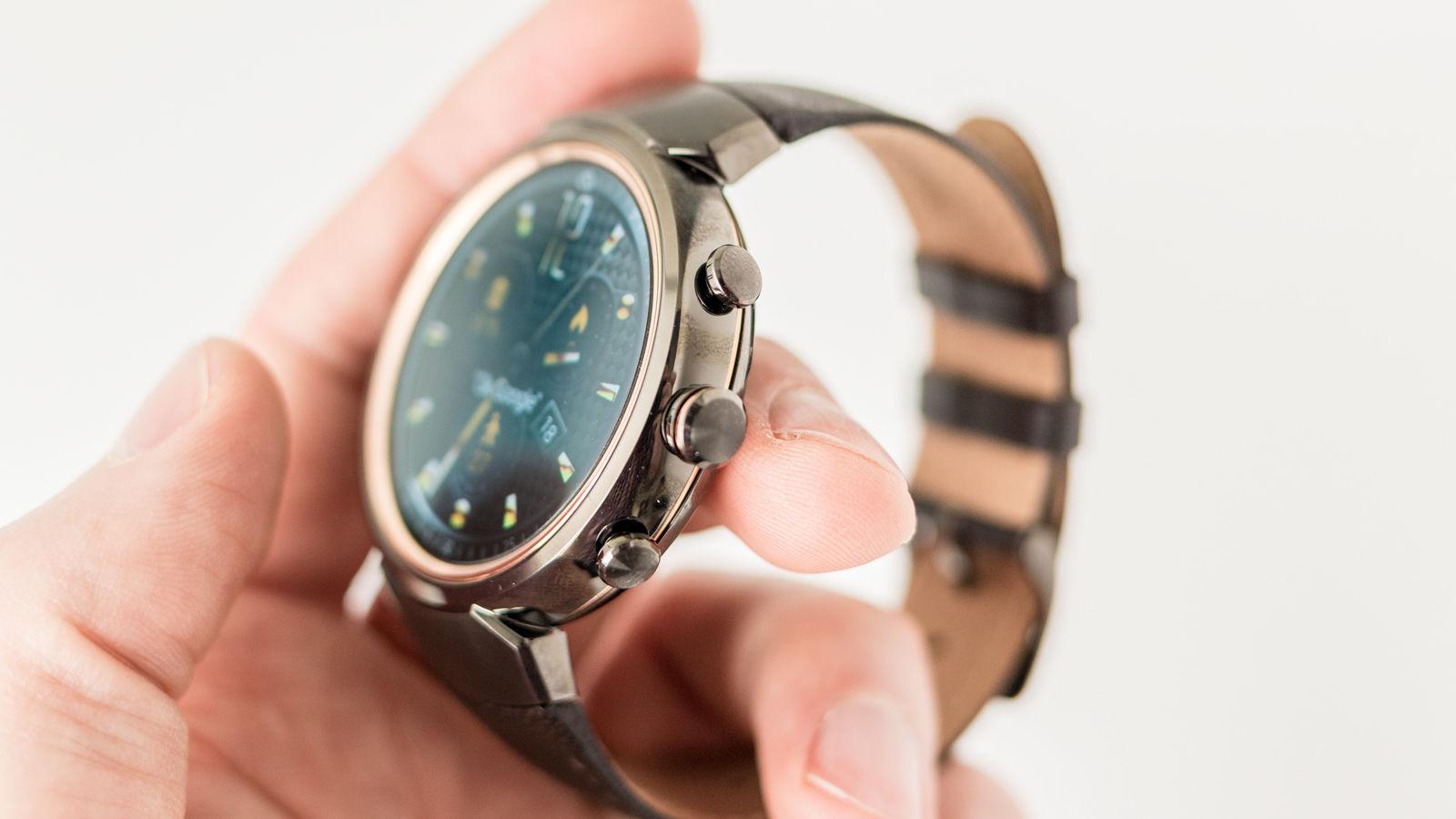 The Asus ZenWatch 3 is hands-down the best looking ZenWatch so far. The company has come a long way from the days of the bulky rectangular first-generation ZenWatch, and now offers a high-end circular smartwatch that wouldn’t look out of place next to traditional luxury wristwatches. In fact, we’d go as far as to say that the Asus ZenWatch 3 is one of the best-looking smartwatches ever.

The third-generation ZenWatch employs an ‘annular solar eclipse design’ with a diamond-cut bezel surrounding the gorgeous 1.39in display. What does that mean? The design mirrors the look during an eclipse when the moon covers the centre of the sun, leaving its outer edges visible. 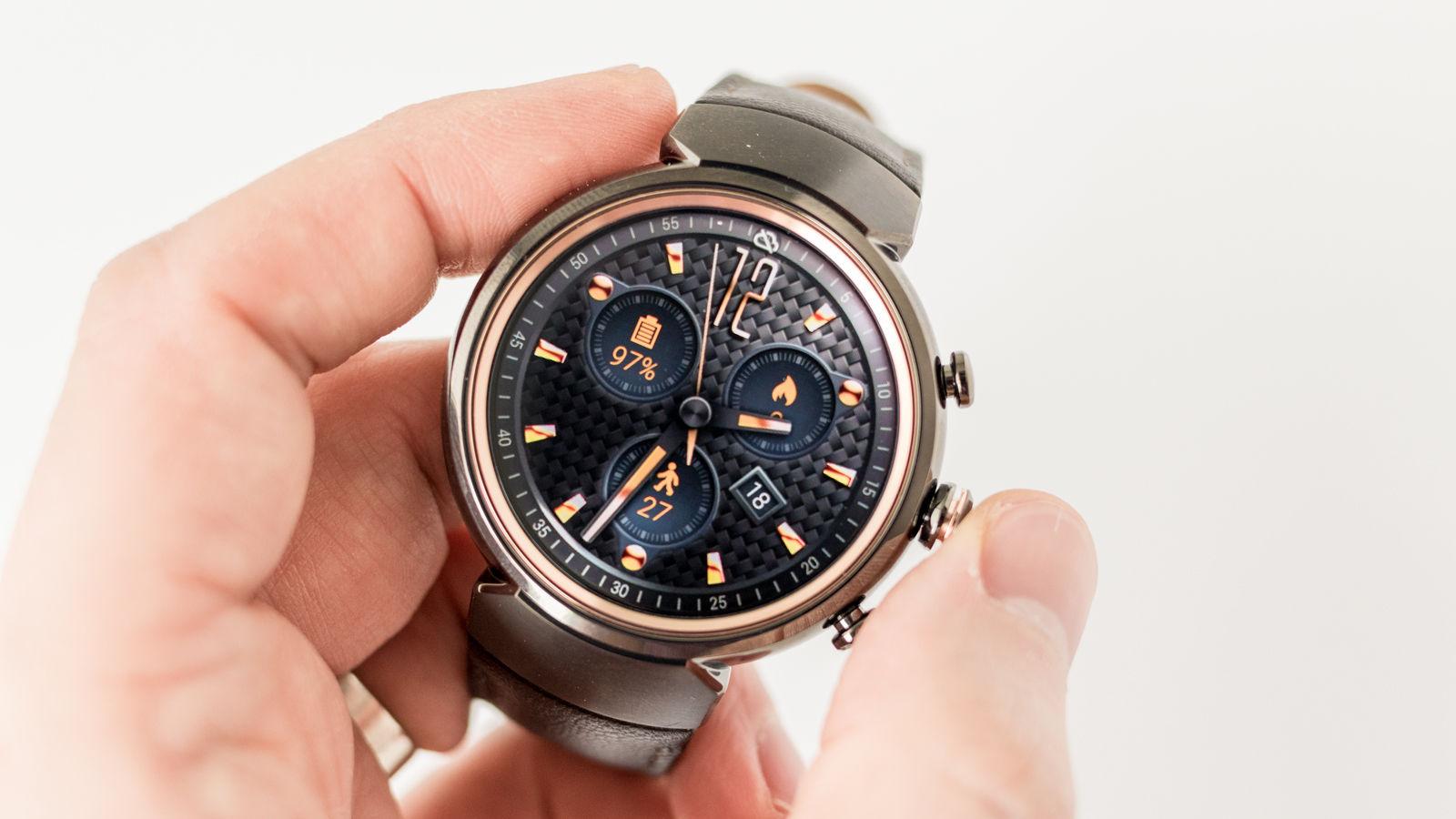 It’s a unique look for a smartwatch and it adds to the overall luxurious look, especially when the colour of the bezel matches small details on the watchface (text colour, widgets, etc). It’s the little things that count, right?

The body is made from 316L stainless steel that was cold forged to make it 82 percent tougher, and is complimented by traditional Italian stitched leather straps. While the straps were initially quite stiff, the leather softened over time and became extremely comfortable to wear. There are three body colours available – Gunmetal, Silver and Rose Gold – each with different straps, although these can be switched out for any 18mm strap for an extra level of customisation.

It’s not only the general design of the Asus ZenWatch 3 that makes it so attractive, though. It’s impressively thin at 9.95mm and weighs only 48g, making it comfortable to wear and not too heavy or bulky for those of us with thin wrists. It also features IP67 water resistance, meaning it can survive for up to half an hour at a depth of 1m.

The ZenWatch 3 has three buttons modelled after the crown found on mechanical wristwatches. They offer shortcuts to various features of the smartwatch: the top button is customisable and can launch an app or function, the middle button provides a range of functions, including access to the Google Assistant and settings, while the bottom button switches on Eco Mode, a mode that extends the battery life of the smartwatch. 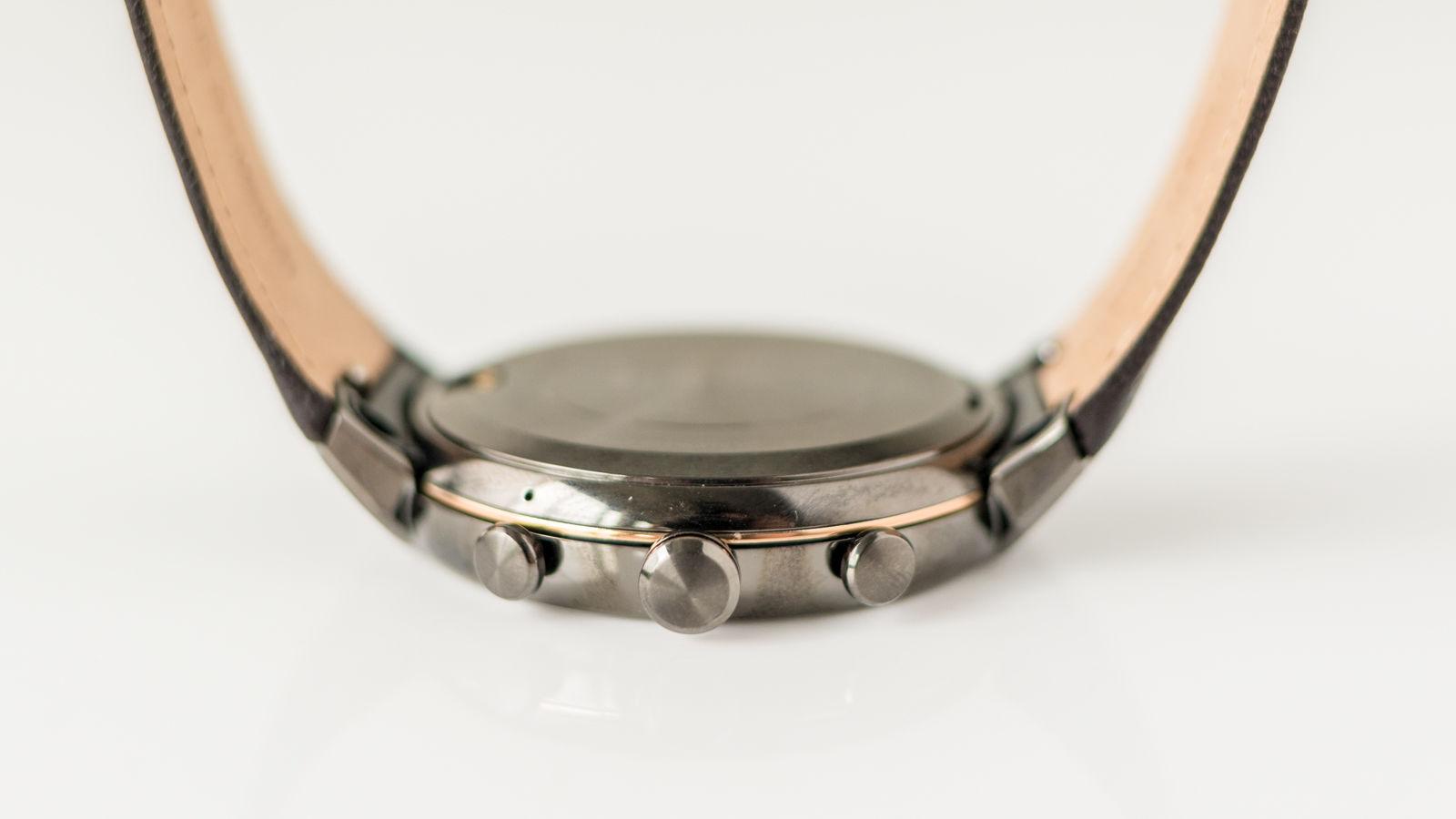 Annoyingly for lefties who wear their watch on their right wrist, there’s no option to flip the screen 180° so the buttons are on the left.

Interested in something a little different? Take a look at our pick of the best smartwatches of 2017.

The ZenWatch 3 has a 1.39in AMOLED display which equates to around 287ppi and is one of the brightest, most vivid displays we’ve seen on a smartwatch despite offering the same 400×400 resolution as the likes of the Huawei Watch 2. It’s also protected by Corning’s curved Gorilla Glass 3 2.5D, giving the display a scratch-resistant cover.

Of course, being a smartwatch, there are many watchfaces available for ZenWatch 3 owners. In fact, Asus offers six themes (Luxury, Digital, Simplicity, Sport, Urban and Youth) and a range of 50 watch faces within that are exclusive to ZenWatch owners. 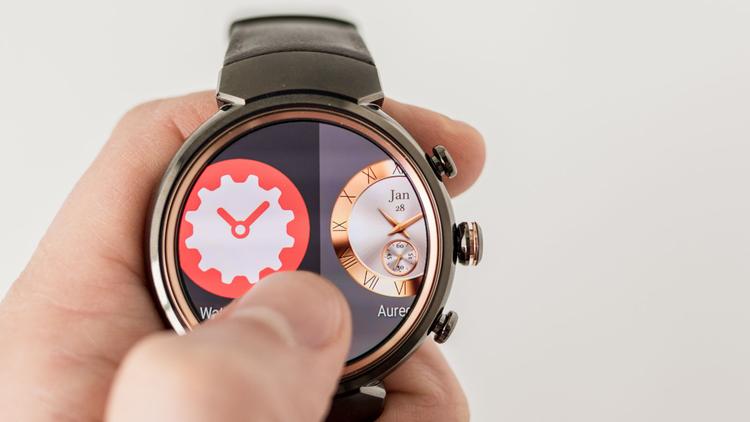 Beyond that, you have an entire library of generic watch faces available for smartwatches running Android Wear, and if that’s not enough, Asus provides a FaceDesigner app for Android users that allows users to design a new watch face with widgets, from scratch.

In terms of processing power, there’s Qualcomm’s latest Snapdragon Wear 2100 processor which is optimised for use in smartwatches, offering improved performance and battery life when compared to the older Snapdragon 400 processor. It also has 512MB of RAM, and 4GB of storage for music.

What does that mean in terms of real-world performance? While there are no benchmarks we can run to quantify its performance, it’s not the snappiest smartwatch we’ve used – even with the Wear 2100 processor.

Even before we updated to Android Wear 2.0 it was often quite laggy and you found yourself accidentally tapping on the wrong function due to the lag.

After updating, this became worse to the point where it could take 10 second to launch the Google Assistant and a couple of seconds before anything happened after a button press or tap on the screen.

Either way, it makes the watch extremely frustrating to use: you wish you hadn’t bothered trying to set that timer or reminder,

In terms of battery life, there’s a 340mAh battery. Before Android Wear 2.0 we found would last around 36 hours before requiring a charge, but after this dropped considerably. Now, battery life is unpredictable. One day it might last to 11pm, but on other days it might conk out before 7pm.

And that’s not simply down to heavier usage: sometimes with very light use the battery will die early, and equally, it can last a full day even when you use it to track exercise.

The good news is that the magnetic charger features Asus’ own HyperCharge technology that provides 60 percent of charge in only 15 minutes, much faster than many rivals. There’s also a battery pack available that’ll extend battery life by 40 percent, according to Asus, although we haven’t been able to test it.

There’s Bluetooth 4.1 and Wi-Fi for standalone connectivity when out of range of the smartphone, although you’ll have to connect to the Wi-Fi network using your connected smartphone before it’ll connect itself. 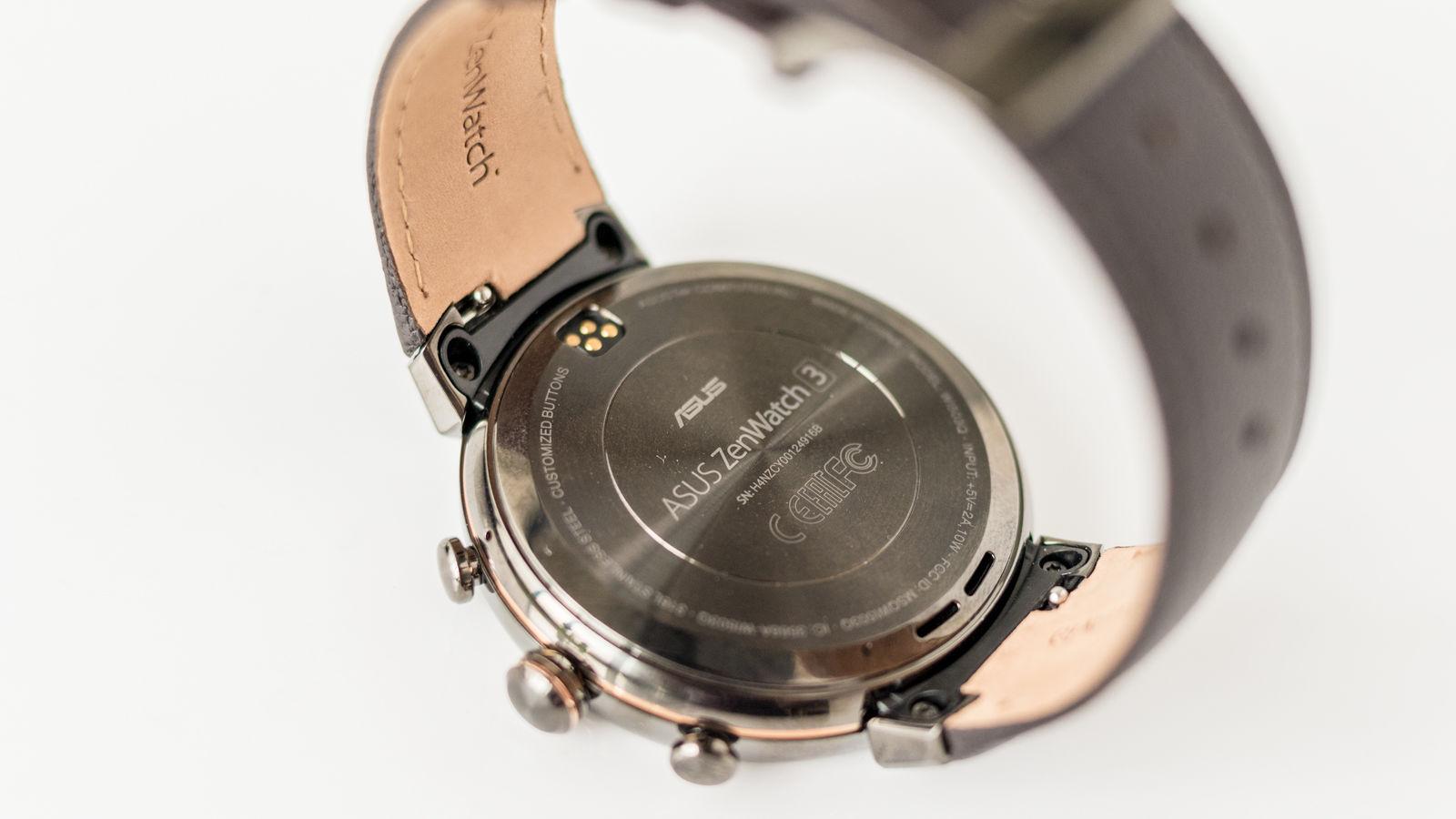 There’s not much else that the Asus ZenWatch 3 can do. Like the ZenWatch 2, Asus decided against including a heart rate monitor after hit-and-miss results with the first-generation watch, and nor does it feature GPS for accurate fitness tracking. It’s clear from these omissions that the ZenWatch 3 is directed more at the fashion-conscious than the fitness-focused.

It’s a shame that after the update to Wear 2.0 the absent heart-rate monitor is rubbed in your face when the newly added Google Assistant tells you to ask it “What is my heart rate?” to which it responds ‘This watch doesn’t have a heart rate monitor’.

In terms of fitness tracking, Asus’ ZenFit app will automatically count steps and encourages you to stand regularly, but with no HR monitor or GPS it’s poor at assessing your overall activity, so the Google Fit watchface is one you’ll probably never use.

As mentioned above, Asus has released Wear 2.0 for the ZenWatch 3. You can read about   Android Wear 2.0’s new features but suffice to say here that it is much improved over its previous version.

Notifications are better handled (though still not perfectly) and, of course, you get the Google Assistant. Settings are easier to access and you can reply to messages using the miniscule on-screen keyboard or by writing letters with your finger (a bit like on the Apple Watch).

Apps can now run independently of your phone, but you’ll still need a Wi-Fi connection of course: there’s no LTE version of the ZenWatch 3.

Ultimately, though, until Asus fixes the sluggish performance of Wear 2.0, you’re not going to be able to enjoy the new features.

Some users have said that disabling the always-on screen improved responsiveness, but that’s not our experience and even if it’s slightly better, it’s still not nearly good enough. 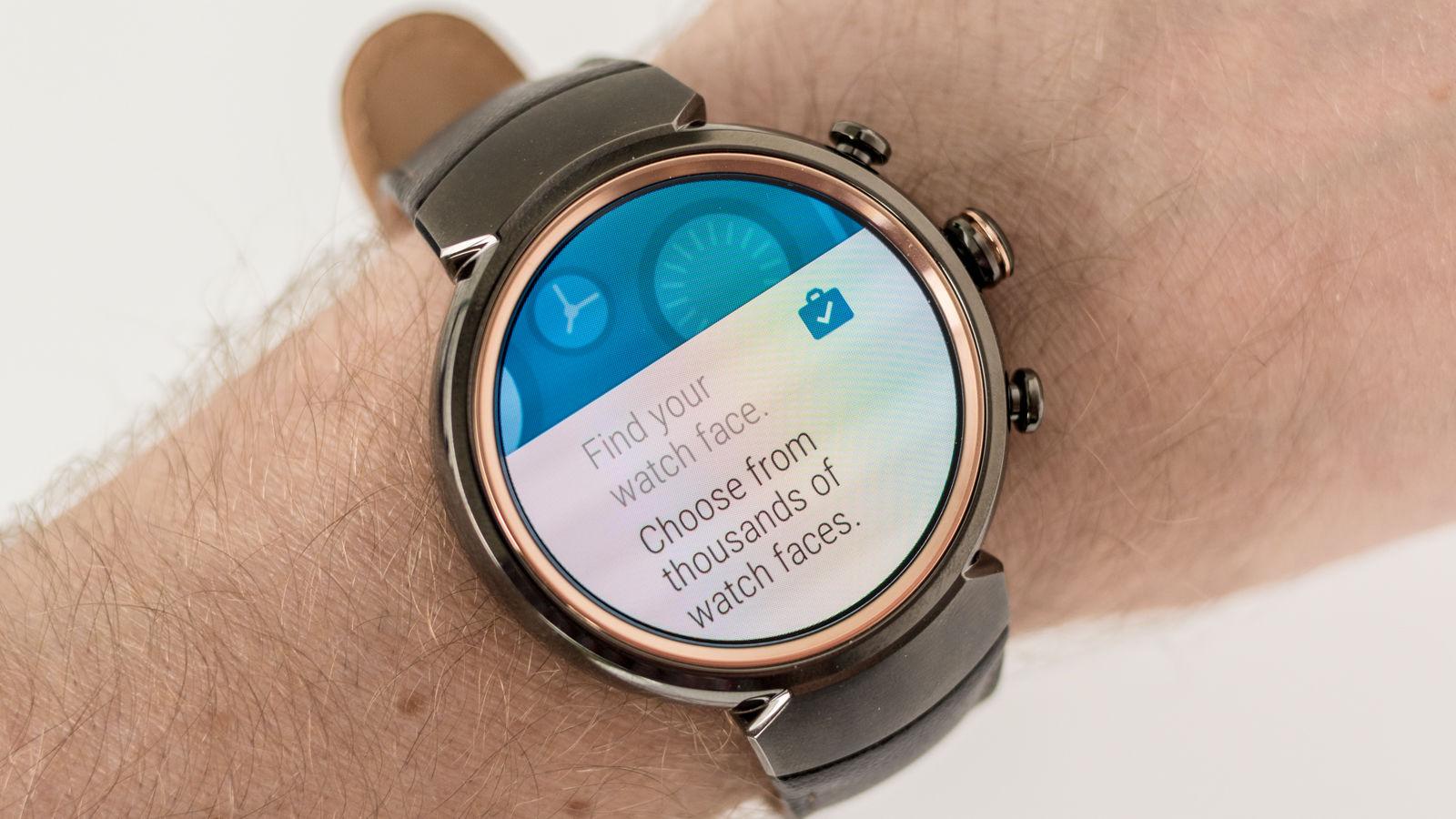