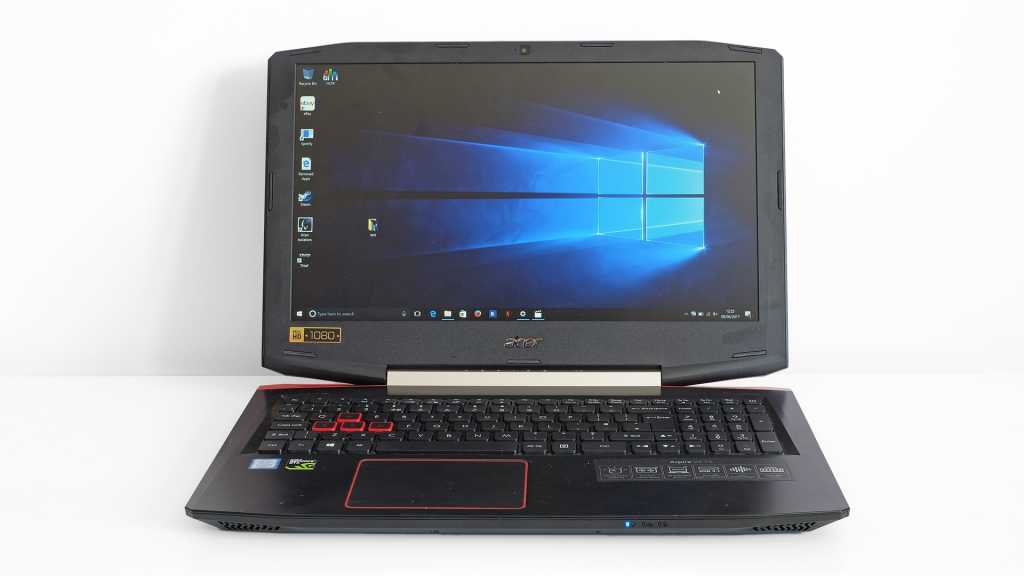 The Aspire VX 15 is a value gaming PC with plenty of bold design flourishes that gamers seem to love. There’s none of the smart aluminium you’ll see in an Alienware 15, but as usual Acer’s plastic build feels very solid. A competent cooling system, usable keyboard and decent (for the price) performance add up to a solid buy. There are two problems. An uninspiring trackpad isn’t necessarily a big deal when you’ll want to plug-in a mouse a lot of the time anyway, but the poor screen really isn’t ideal. Bad contrast and weak colours won’t make your games look great, although the rival Dell Inspiron 7000 Gaming suffers from exactly the same problem.

This has not happened, though. Lower-end gaming laptops are still pretty expensive, and the £899 Acer Aspire VX 15 is one of the most affordable, sitting next to models like the Dell Inspiron 7000 Gaming.

For the price you get reasonable 1080p gaming performance and a real gamer’s look. However, display quality really isn’t that hot, as with most of the value gamer laptops we’ve seen recently.

It matches what Dell charges for its similar Inspiron 7000 Gaming laptop.

It’s not a bad deal, but looking at US prices will make you cringe. A similar (but not identical) spec costs US$799, which is clearly a much better buy. (Oddly enough, it’s exactly the same situation with the 7000 Gaming. Coincidence? We think not.)

The Aspire VX 15 comes with a one year ‘carry-in’ warranty, which means you have to take the laptop to a service centre yourself should something go wrong.

Among more affordable gaming laptops, the Acer Aspire VX 15 is very bold. It has that real gamer look, a lot more aggressive than the average laptop.

Big red-outlined vents on the back and a sculpted lid are the sorts of flourishes you might see in one of Asus’s top-end RoG laptops. Not everyone will like them, but they scream “gamer”.

Like most gaming laptops, the Acer Aspire VX 15 is all-plastic, using colour and contours to give the design an edge, rather than aluminium. The lid has a brushed aluminium effect, with a couple of bright red streaks for a bolder look, but it’s all various kinds of plastic.

More expensive gaming laptops tend to pack in more on-body LEDs to make them stand out, but flashing lights aside this model looks at home next to them.

Acer continues its current trend of offering some of the most consistent build quality among laptop-makers too, with very little flex to any part of the Acer Aspire VX 15 (the lid plastic flexes a little). Most notably, the plastic keyboard surround plate is rock-solid.

As you can probably tell from the photos, the Acer Aspire VX 15 is not a laptop that tries to be super-slim. It is not particularly portable, but is also not a true leviathan of a gaming laptop. You can move it around the house easily enough, although its 29mm thickness and 2.5kg weight mean it’s a little too big and heavy to carry around in a rucksack all the time.

The spread of connections covers all the basics required of a laptop like this. There are two USB 3.0 ports and an extra USB 2.0, plus a newer USB-C connector. This isn’t an ultra-high bandwidth Thunderbolt 3-capable socket, but will at least give you somewhere to plug-in any USB-C peripherals you pick up in the next few years.

A HDMI output is on hand for connection to a monitor or TV, there’s an RJ45 network port and a full-size SD card slot.

What’s missing? There’s no mini DisplayPort and no optical drive. These seem like acceptable sacrifices in what is ultimately still a ‘value’ system.

The Acer Aspire VX 15’s keyboard and trackpad have been given a gaming flavour with hints of red. In the trackpad it’s a thin red outline. The red continues under the keyboard too. There’s a red backlight, giving the Acer Aspire VX 15 a rather near two-tone look — aside from that band of silver by the hinge, anyway. Quite a lot of gaming laptops now offer rainbow keyboard backlights, but the red here is pleasant enough.

Key action and depth aren’t unusually deep or extra-defined, but as with most Acer laptops reviewed recently, they are perfectly good. We spent a few afternoons typing out articles on it with no problem.

As this is a ‘full-size’ 15in laptop, there’s plenty of room for the keys to stretch out. There is a NUM pad to the right of the main keys too, and the WSAD keys are outlined in red to make them clearer.

There are no macro dedicated macro buttons, though.

The trackpad is weaker than the keyboard. You’ll want to attach a mouse for any real gaming sessions. It’s a basic plastic textured pad rather than a glass one, although the main issues are to do with the clicker mechanism rather than the surface, which is actually perfectly nice for a lower-end pad.

The click mechanism has a chunky 1in dead zone at the top, and its slightly leaden action makes quick double-clicks less than comfortable. Keep a mouse handy when you can.

The 15.6in 1920×1080 display is the weakest part of this laptop. It’s also part of the reason this laptop is a little more affordable than some.

By using a TN panel rather than the more popular IPS kind, Acer has all-but assured the VX 15 pretty bad colour and contrast. Only a few TN laptops have delivered the goods in these areas.

Colour is poor, covering just 59.4 percent of sRGB. With this level of performance it’s barely worth thinking about the more demanding Adobe RGB (38.3 percent coverage) and DCI P3 (39.3 percent) standards.

Tones are clearly undersaturated, making the screen appear weak. It’s the sort of image quality you might expect from the cheapest 1080p laptops.

It’s probably contrast rather than colour saturation that has the most pronounced effect on how satisfying the VX 15 seems day-to-day, though. A truly dismal 243:1, blacks are not very deep and poor max screen brightness of 211cd/m makes this laptop unsuitable for use outdoors, despite the matt finish.

The VX 15’s screen is not colourful, bright or punchy. It’s not all bad, though. Resolution of 1080p is what we’re after in an entry-level gaming laptops and TN screens are generally a lot ‘faster’ than IPS LCD ones. What this means is that when there’s fast high-contrast action on-screen, you’ll see less motion blur, making the whole image that bit clearer.

We are clutching at straws here, though: the Acer Aspire VX 15 screen isn’t good.

While not a tech masterclass in every respect, the Acer Aspire VX 15 offers very solid performance in most respects. Our model ‘only’ uses an Intel Core i5 rather than a top-end Core i7, but it’s a  quad-core HQ-series processor rather than the low-power U-series kind used in thinner laptops. It’s a 2.5GHz Intel Core i5-7300HQ.

As such, it’s significantly more powerful than the top ultra-slim laptops, but lacks higher-end features like hyperthreading. This is what lets top-end quad-core Intel CPUs act as if they have eight cores.

The benchmarks tell you roughly what to expect. In a real-world productivity demo like PC Mark Home 8, the VX 15 scores 2879, which is actually somewhere between the Core i5 and i7 score of an ultraportable. Nothing too exciting, in other words.

However, with a more abstract benchmark like Geekbench 4 we see the real benefit of those extra cores. A score of 10166 points is a 60 percent boost over the Dell XPS 13, which has a dual-core CPU.

A real workstation would have more than the 8GB DDR4 RAM you get here, and probably a Core i7, but we’d be happy using the Acer VX 15 for virtually any productivity job.

There’s only 128GB of fast SSD storage, which is enough for the OS and a storage-hungry game or two. We always prefer 256GB SSD storage as it involves a lot less juggling of installs. However, there’s also a 1TB HDD for all your media, music and less demanding games. Any titles installed on the HDD will take a little longer to load, but you won’t generally see huge performance differences in-game.

Gaming is the main event. Proof that Nvidia’s current-gen cards are really quite special, even though the VX 15 has the low-end GTX 1050, a bottom-rung card, it’s still great for 1080p gaming, and that’s fine given the 1080p screen.

At this resolution with all the graphics settings turned up, Alien: Isolation averages 76fps. That must be worth an Achievement Unlocked notification.

At 720p with some of the effects turned off, the game runs at a crazy 162fps.

Thief isn’t quite as quick, running at an average 41.7fps at 1080p and 60fps at 720p. However, this test is also fairly processor-intensive, getting close to maxing-out the CPU.

We got marginally better results from the Dell Inspiron Gaming 7000, but that’s no surprise as the model we were sent for review had the “Ti” version of the GTX 1050 card and a Core i7 processor. It costs a good couple of hundred pounds more than this Acer Aspire VX 15. The entry-level model which is the same price as the Acer performs basically the same.

Compared to a GTX 1060 or GTX 1070 laptop, there’s less overhead for future increases in the GPU demand of games. Today’s titles already challenge the GTX 1050 at high settings so you may have to juggle graphics parameters before too long. Some titles even demand it today if you want truly smooth visuals.

Moving up to a laptop with one of those GPUs will cost you a lot more money, though.

The Acer Aspire VX 15’s dual-fan cooling system also seems to work very well. Its processor mandates using fans whenever the laptop is on, but with light tasks they are very nearly silent.

It’s not too loud under stress either. The Acer Aspire VX 15 has a fairly heavy-duty cooling system for a laptop with an entry-level GPU, and can push quite a lot of air out of those rear vents.

A standard assumption with a laptop like the Acer Aspire VX 15 is that it is going to have fairly poor battery life, thanks to its use of a powerful quad-core CPU and powerful GPU. Like the similar Dell Inspiron Gaming, though, this isn’t the case.

Playing a 720p video on loop, the Aspire VX 15 lasts a solid six hours 40 minutes. It’s enough to be used as a productivity PC away from the charger, although the Dell Inspiron 7000 Gaming lasts significantly longer: just under nine hours of video playback.