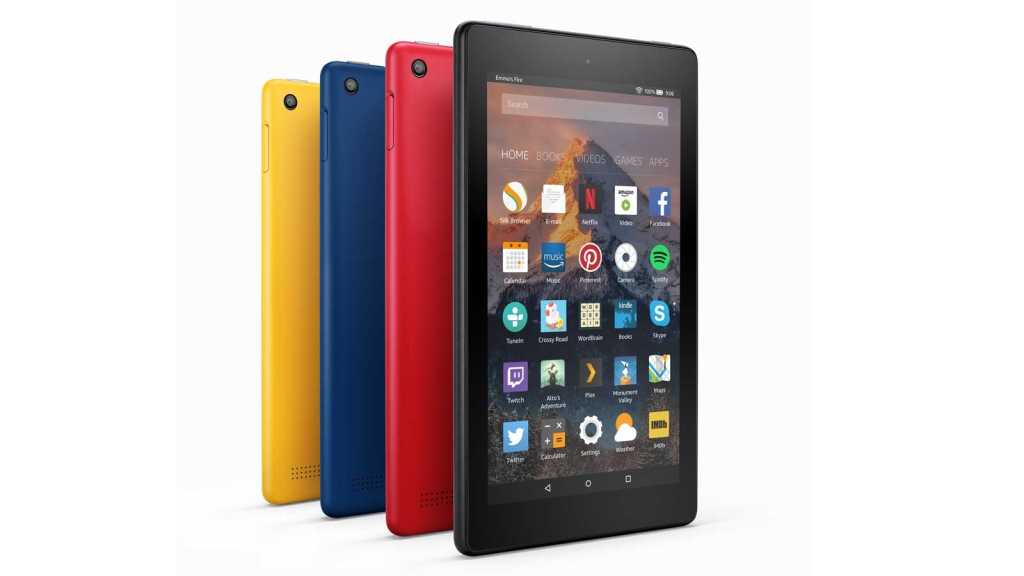 The Fire 7 is a very minor update to the 2015 7in Fire tablet. It’s a shame that the processor and cameras haven’t been upgraded, but the low price makes it hard to complain. It remains great value and a great way to use Amazon’s services including video and music – as well as Alexa. The absence of all things Google will be a deal-breaker for some, but it’s an excellent choice for kids or undemanding adults.

In 2015 Amazon launched the original £49 Fire tablet. It instantly became the benchmark for cheap tablets, despite not running Android nor offering any Google apps.

Almost two years later an all-new Fire 7 arrived still at the same price. However, while there are some new aspects – and Alexa is baked into the software now – it’s not “all new” at all. But it is still great value.

NOTE: There’s now an updated version of the Fire 7. You can read our review of the 2019 edition here.

A software update which arrived in early 2018 added a hands-free mode so you can use Alexa without having to press and hold the home button on the Fire 7.

So long as the tablet is plugged in or while the screen is in use, Alexa will respond when you say her name, just like an Amazon Echo. You can use Alexa to control video playback, set a timer, play a song, dim the lights, open your calendar, show your smart home security camera, and more.

You can buy a Fire 7 from Amazon for £49.99. That includes a mains charger and USB cable, and the tablet will display ‘special offers’ on the lock screen.

If you’d rather not be subjected to ads every time you turn it on you can choose to pay an extra £10 when ordering.

You can also upgrade from 8GB of internal storage to 16GB for £10 (that’s well worth doing) but don’t forget you can also add storage by inserting a microSD card – up to 256GB is supported.

There’s a choice of four colours, three of which are new: Marine Blue, Punch Red and Canary Yellow, and they’re all the same price.

If you own an original Fire 7in tablet there’s no good reason to upgrade, but if you do for some reason then know that any cases you have won’t fit the new tablet.

As before, there’s a separate Kids Edition of the new tablet. This costs £99.99 from Amazon and includes a two-year guarantee which covers accidental damage, so a broken tablet will be replaced with no questions asked. For additional protection for your device, see our round up of the best cases for the Amazon Fire 7.

It also gets you 16GB of internal storage, a protective bumper case in pink, blue or yellow and a year’s subscription to Fire for Kids Unlimited. That includes loads of films TV shows, music, games, apps and books suitable for 3-12 year olds.

Confused about which one to buy? We explain separately how the three Fire tablets differ.

It may look identical, but the Fire 7 does have a subtly different design to its predecessor. It’s marginally taller and thinner, has a slightly redesigned microSD slot cover and on the top edge the volume buttons and headphone jack positions have been swapped.

The camera lens also looks a little different and there’s no longer a seam around the perimeter of the tablet like the old version.

None of this matters one jot, of course, but it does prove that this isn’t just the original 7in Fire in new colours.

The bad news is that the internal hardware hasn’t changed. There’s still the underpowered 1.3GHz quad-core processor and woeful cameras. Plus, the screen still has the same low-resolution 1024×600-pixel screen.

However, it’s still hard to complain at this low price and Amazon has updated the Wi-Fi so it will work on both 2.4- and 5GHz (it was limited to the former only before).

A big new software feature which, incidentally, will be added to older Fire tablets via a software update, is Alexa.

We’re big fans of Amazon’s £49 Echo Dot since it’s a remarkably inexpensive way to have the useful assistant at your beck and call.

On the Fire 7, Alexa has all the same capabilities but you can’t say “Alexa, turn on the lights” because the tablet isn’t always listening for the wake word. Instead, you have to long-press on the on-screen ‘O’ button that doubles as a home button after unlocking the tablet before you can speak.

If you already have another device with Alexa you won’t have to set anything up as merely registering the Fire 7 with your Amazon account is enough. That’s because most of Alexa’s settings and Skills are stored in the cloud, so you can control all the smart home kit and use the skills you’ve already set up previously.

On our review tablet, the language was set to US English and we had to change that in the main Settings app before Alexa would speak in a UK English voice. There’s no option to change the language within the Alexa app itself, which is strange as you can do this if you select an Echo device instead of the Fire tablet.

In terms of her usefulness for tablet-specific things, Alexa can play music from Amazon Music and videos from Amazon Video. You can also ask her to launch apps and search the web for anything.

She’ll tell you what’s on your calendar, give you your flash briefing, a weather forecast and report on certain sports.

And as with the Echo, you can speak to Alexa to order items from Amazon, set alarms and timers, add things to your shopping and to-do lists, or listen to a radio station on TuneIn.

As the processor and RAM remain the same, there’s really no difference in performance compared with the original 7in Fire tablet.

Ultimately, it’s best described as adequate. If you’re used to the performance of a flagship phone or tablet, you’ll notice the extra wait to launch apps and web pages, and a slight sluggishness when navigating around FireOS, typing and changing settings.

The touchscreen is nice and responsive, and thanks to the fact it’s an IPS panel, viewing angles are decent. It’s not the brightest screen around, nor the best for colours.

But many of these tablets are bought for kids, and we’ve never heard a single complaint about performance or screen quality from any of our testers under 10.

What could be a little better is battery life. Amazon says you’ll get around eight hours of “mixed use”. But if the Fire 7 is used for playing games or watching back-to-back videos at full brightness, you’ll find it needs recharging sooner than that.

And expect it to take around five or six hours to fully charge from empty using the included charger.

If you’re not familiar with Amazon’s FireOS software, then fear not. It’s well designed and easy to use. It’s much like Android and iOS, and is actually based on Android. (You can also read our guide on how to set up a Fire tablet.)

Where’s all the Google?

However, it’s crucial to understand that there are no Google apps, nor the Google Play store. If you’re determined, it’s possible to ‘side load’ many Android apps, but it’s not easy to get Google apps. However, although Google has now blocked access to the YouTube app on Fire devices, it’s still possible to get it on the Fire tablets. If it does get blocked, you can watch – inconveniently – via a web browser.

If Google apps and services are essential, then buy an Android tablet.

Naturally, FireOS makes it very easy to use Amazon’s services so you can watch and download videos from Amazon Video, and stream or download music from Amazon Music. It also includes the Kindle app for reading ebooks.

When you watch videos you get all the Amazon features you expect, such as X-ray information which tells you which actors are in the scene you’re watching and trivia about the film or TV show.

There’s also a selection of ‘Actually Free’ apps and games in the Appstore, which don’t contain any in-app purchases or ads. They’re not exactly easy to find until you realise you can filter your search to only look in the Underground category. It’d be much better if there were an Actually Free section signposted, but Amazon is in the process of shutting down this section, so grab these apps while you can.

Even if you buy the normal version rather than the Kids Edition, you still get the excellent parental controls via the Fire for Kids app and the ability to create multiple user profiles.

If you want to capture the screen on your tablet, see how to take a screenshot on Amazon Fire tablets.