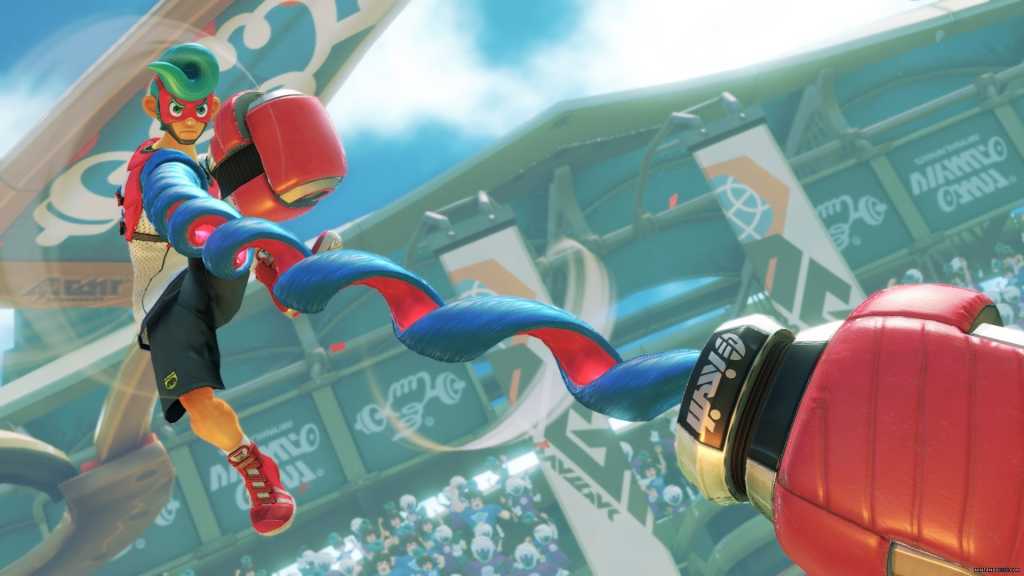 Between the chunky, colourful aesthetics and madcap mechanics, Arms is Nintendo through-and-through. The motion controls aren’t perfect, but add enough fun to be worth the loss in precision, and the simple mechanics hide a surprising amount of tactical depth. How long the appeal lasts might depend on how successfully Nintendo expands the rather slight fighter roster, but right now Arms is a very welcome addition to the Switch lineup.

Arms is Nintendo’s first attempt to create a whole new franchise for its Switch console (not counting the disappointing mini-game collection 1-2-Switch), and in true Nintendo fashion it’s a downright weird twist on an existing genre.

In this case, Nintendo has turned its attention towards fighting games, tweaking the formula just enough to end up with a primary colour-drenched boxing game starring an Egyptian mummy, a robot dog, and a green blob, who all fight with mechanised extendable arms.

So, Arms is weird. But is it any good? Find out in our review.

Where can I buy Arms?

In the UK, the best price comes from Amazon, which is offering orders at £44.99. You can also order it from  Game for £49.99, while the official Nintendo store has the same price, but with a free boxing glove stress ball.

If you’re in the US, there’s less of a choice – the game costs around $59.99 from either Amazon or GameStop.

So, what is Arms? It’s Nintendo’s latest effort to create a welcome new franchise, and much like Splatoon before it, it’s an attempt to take an existing, established genre and Nintendo-ify it.

Just as Splatoon transformed the arena shooter by swapping soldiers for squids and bullets for ink splats, Arms hopes to reinvent the fighter by incorporating a varied set of extendable arms, building it all around motion controls that (thankfully) work well – most of the time.

The core gameplay is over-the-shoulder boxing, with the aim to knock your opponent out – through a combination of punches, grapples, items, and specials – before they can do the same to you. Matches are best of three rounds, and take place in a series of tightly designed stages – each with a quirk or two.

The obvious thing that makes Arms stand out is… well, the clue’s in the name. Each of the ten fighters available at launch is equipped with a pair of extendable arms, meaning the combat sits in a strange space somewhere between melee and ranged, so that both aiming and dodging become vital to success.

By default, Arms encourages players to adopt motion controls for all this. With one Joy-Con held in each hand (in what Nintendo unhelpfully calls the ‘thumbs-up grip’) you can punch to, well, punch, push both hands forward to grapple, and point them inwards to block. The only buttons required are the shoulder ones, to jump, dash, and trigger a special Flurry Rush attack.

There’s a welcome simplicity to the control scheme, though there’s space for depth too. Twisting your arms will in turn curve your punches with surprising subtlety, leaving room for nuance in aiming, curving, and even feinting with your attacks.

It’s not quite flawless. I sometimes found myself blocking when I meant to grapple, or grappling when I meant to throw a single punch, while the fact that tilting the Joy-Con is used for both moving and curving punches caused some occasional confusion.

You can play with buttons – either with two Joy-Cons, a Pro Controller, or even one Joy-Con turned on its side – but while that made the game easier, it also made it undeniably less fun. That’s how you’ll likely play the game on the go (and will almost certainly be what the competitive scene adopts), but Arms is at its best when you’ve got a bit of space to move and flail your own arms about.

To make things more interesting, not all arms are created equal. Each fighter comes loaded with a choice of three weapons with varying effects and styles. There are straight-up boxing gloves, but there are also rockets, shields, wrecking balls, laser-shooting dragons, and more.

Each of these plays startlingly differently, impacting the speed of your attacks, how they’re controlled, and how best to aim them. You can also choose each of your arms separately, and swap your loadout between rounds, which is where much of the competitive tactical play will come in, as you alter and optimise your loadout in response to your opponent’s tactics and playstyle.

There’s yet more variation in each of the fighters, each of whom has some sort of twist to the way they play. Spring Man’s punches charge up when he’s on low health, Master Mummy can heal when he blocks, and Byte is joined by his robo-dog buddy Barq, who helps out by throwing out the odd punch every now and then.

The fighters are the highlight of Arms’ charming aesthetic. They’re tremendously varied, but somehow still seem of a piece with one another, and there’s character heaped into every animation, soundbite, and victory pose. The fact that characters like Helix – a blobby green ‘DNA man’ that looks like Flubber in boxing gloves – had already attracted enthusiastic fanbases weeks before launch is a strong sign that Nintendo’s onto a winner here.

The only downside is that there are just ten characters at launch, meaning the roster is a lot slimmer than those of the fighting game stalwarts Nintendo is attempting to innovate on. Still, Nintendo has promised more fighters, weapons, and stages as free DLC, which should help somewhat – the first, Max Brass, is due some time in July.

In terms of actual content, there’s a 10-stage arcade mode (here dubbed Grand Prix), 1v1 and 2v2 fights, and an assortment of mini-game takes on sports: volleyball, basketball, and target shooting. The clear winner here is Hoops, an oh-so-Nintendo twist on basketball that sees you trying to grapple your opponent in order to dunk them (as opposed to a ball) through an oversized hoop. It’s the sort of mini-game that threatens to overshadow the main event, and is especially ideal for beginners.

You can play multiplayer either online or offline, and the latter gives you the choice of playing on the same console, or connecting a few Switches together wirelessly. Since it’s possible to play with just a single Joy-Con, any Switch can support two players out of the box, and it shouldn’t be too hard to get enough controllers together for some 2v2 local multiplayer either.

And there’s another example of the commitment to innovation, to resisting the formulaic, that runs through arms. Play 2v2 and each team’s combatants are tethered to one another, forcing either coordination or chaos as they yank each other around the arena. It’s a subtle addition, but a sign that Arms is the work of a Nintendo eager to prove itself, bluntly refusing to rest on its laurels.

Arms is trying to strike a similar balance to Super Smash Bros, Nintendo’s other foray into fighting, hoping to simultaneously appeal to competitive esports types and those just hoping for a fun party game with a few mates. It remains to be seen how well the competitive crowd will take to it, but as a multiplayer game with a low barrier to entry and a lot of fun to be had, Arms is a clear success.