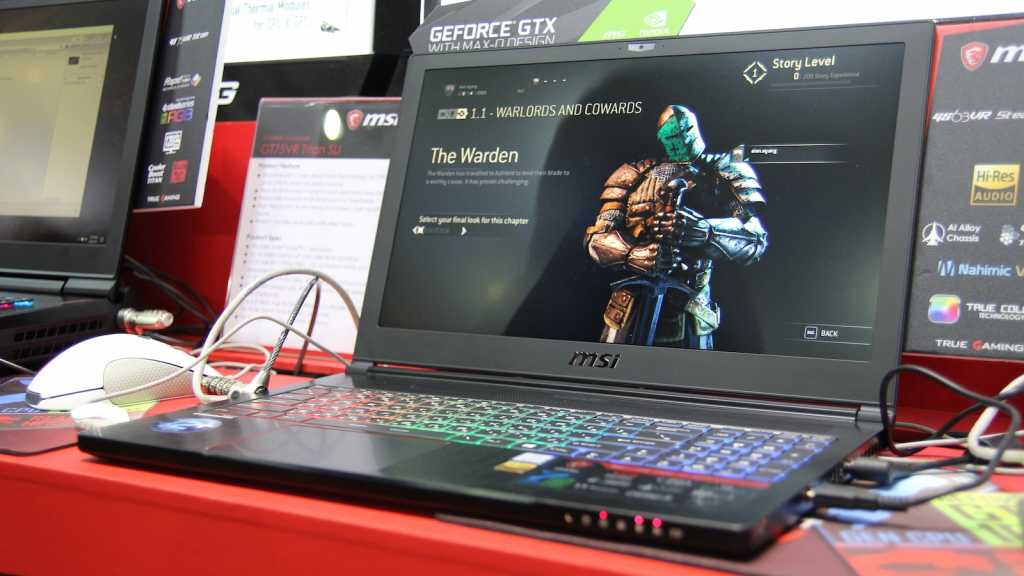 We need to details such as price and battery life but the MSI GS63VR Stealth Pro is a seriously sleek and portable gaming laptop. With Nvidia Max-Q it’s got a GTX 1070 plus plenty of other great specs.

For a long time, gaming laptops without cut-down specs have been huge lumps you wouldn’t want to lug around. Well the Max-Q standard now means a sub-18mm ultraportable device can have a fully-fledged GeForce GTX 1080 inside. Find out more about Nvidia Max-Q.

At Computex this year, MSI has been very quiet about these kinds of details. Nvidia has said Max-Q laptops will be available starting in June, though, and the Asus ROG Zephyrus will go on sale 27 June.

Rumour has it that MSI’s new range of laptops will start at $1,500 so it could be cheaper.

From the looks of it, the GS63VR Stealth Pro is just another gaming laptop with colourful lights and a thin design. You would assume that it has good specs but because it’s not the same thickness as your fist, a mobile version of a GPU would be normal.

The GS63VR Stealth Pro is just 17.7mm thick and only weighs 1.8kg. A while ago, or even now in some cases, it would be acceptable to have no dedicated graphics card with those figures.

Thanks to Nvidia’s innovation and close work with the manufactures, this laptop packs a GTX 1070, but you just wouldn’t know it. It doesn’t have a Max-Q giveaway design like the Zephyrus and Acer’s Predator Triton 700.

Those rivals have the keyboard at the edge of the chassis and a seemingly vast empty space until you reach the hinge and screen. That’s in order to keep the GPU cool but this doesn’t appear necessary.

There’s no nifty mechanised vent system like the Zephyrus but MSI’s ‘Cooler Boost Trinity’ technology promises to stop anything overheating. This consists of triple enhanced Whirlwind Blade fans and a total of five heat pipes. The device didn’t seem too hot to us, despite being powered on at Computex all day.

MSI is actually using an existing design here but that’s not exactly a bad thing. It looks sleek and appealing to the eye thanks to its aluminium alloy casing. We found it to feel strong but the key thing is that 1.8kg weight which makes it truly portable.

Having the keyboard sitting in the traditional position makes it more comfortable to use because you have somewhere you rest your hands. We like the rubbery feel of the SteelSeries keys but this won’t be to everyone’s taste. As with almost every gaming product, you have full control over the RGB backlight.

The trackpad is also huge, although you’re bound to be plugging in a mouse for any serious gaming.

Should you want to, we can’t really think of obvious reasons, the screen folds completely flat.

As mentioned several times already, the GS63VR Stealth Pro comes with a GTX 1070. That’s the headline feature but there’s a lot more to talk about here – a lot going by the fact MSI is calling it the “most powerful ultra slim 15.6in gaming notebook with GeForce GTX 1070”.

A specific claim as usual but there are some impressive specs here regardless. For starters you get an Intel Core i7 (7th-gen) processor – one option will be an i7-7700HQ – and up to 32GB of DDR4-2400 RAM. See: Intel vs AMD.

That 15.6in display uses IPS technology and comes in either Full HD or 4K resolutions. Like the ROG Zephyrus, the MSI supports 120Hz and also a response rate of just 3ms. We were pretty taken during our hands-on time.

If 15.6in is too small for your taste then MSI also has a larger 17in option called the GS73VR Stealth Pro.

The laptop might be thin but there’s no sacrifice when it comes to ports so you won’t need to use annoying USB-C adapters to plug something in. The GS63VR Stealth Pro offers USB-C/Thunderbolt 3, 3x USB 3.0, 1x USB 2.0, HDMI, RJ45, Mini DisplayPort, mic, headphone and an SD card reader.

Overall it’s a pretty compelling package but like the other Max-Q laptops there’s one key question and that’s around battery life. The fact these devices are so portable means users will inevitably take advantage of not being tied to a power socket.

If they don’t last very long then it detracts from the portability somewhat but the MSI GS63VR Stealth Pro has a decent 51Wh battery.