The DJI Spark may not offer the best photo or video quality, but as a package it’s one of the best you can buy under £700. It’s so small it will fit in practically any bag, it’s easy to use and it has features – such as object tracking and obsctable avoidance – that you’d expect only in more expensive models.

The thing about most drones which take photos and videos worth having is that they’re too big. Just as most people choose to leave their bulky DSLR at home and use their phone most of the time, drones such as the Phantom 4 are only taken out on special occasions.

But the Spark changes all that. It may not fold up like the Mavic Pro, but DJI’s latest drone is even smaller and lighter and it can be flown using gestures, so there’s no need for a controller (but you’ll still need one for most features – read more in our review of the Spark controller).

There could be a new model coming: the  DJI Mavic Mini.

The Spark is available on its own for £519 from Heliguy, DJI direct and other retailers. That includes the drone, a battery, a carry case, mains charger and two spare propellers. Frustratingly, it’s cheaper in other countries: only $499 in the US, for example.

That’s the ‘from’ price, though. The polystyrene case is nice, but all the other accessories will cost you. Also check out the new  Mavic Air. 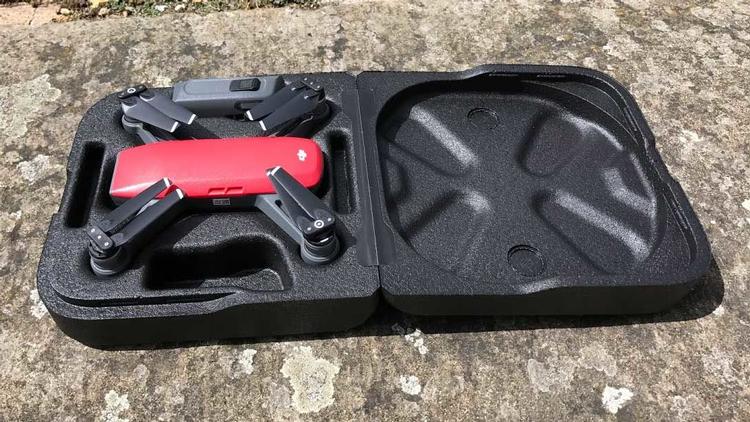 Plus, you’ll quickly find one battery isn’t enough (they last about 15 minutes and take around an hour to charge via USB) so you’ll want at least one extra. They cost £55 each. Usefully there’s space in the case for two extra batteries.

For most people, it’s best to stretch to the Fly More Combo pack. This is £699 from Heliguy, but comes with a remote control (£159 on its own), that extra battery, a charging hub (£69) which can take three batteries at once, two sets of props, a shoulder bag and a set of prop guards (which should really be included with the basic kit too).

That may sound a lot of money, but it’s much better value that buying all the bits separately.

Rivals include Parrot’s Bebop 2 Power and DJI’s own Mavic Air.

Who is the DJI Spark aimed at?

DJI is keen to point out this is not a ‘selfie drone’. It does take pretty great selfies, though.

Really, the Spark is like a mini Mavic Pro: it has all the same intelligent flying modes and similar obstacle avoidance tech. So it’s aimed at enthusiasts, not those that simply want an aerial selfie.

If anything, that makes it seem cheap, rather than insanely expensive – the Mavic Pro costs £1099.

Despite being positioned as a drone for the family, and since you can land the Spark on your palm, the absence of prop guards in the £519 package seems a bit strange. You can buy a set separately for £25.

You can control the Spark via a phone or tablet, but if you want more than Wi-Fi’s 100m range, you’ll need the optional controller. This is a wise investment as it not only gives you better control and range, but also gives you extra features such as Sport mode, plus better video transmission. It’s £159, but buy the Fly More Combo pack and you’ll effectively get all the other stuff for free. 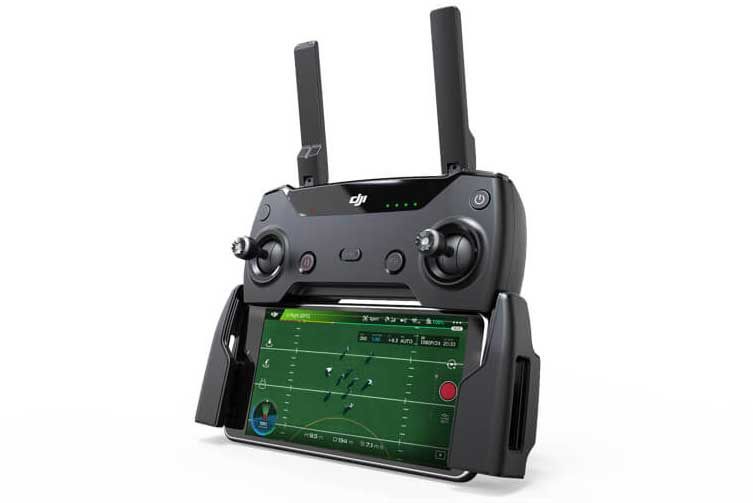 A nice feature is that you can charge the Spark via microUSB which means you can charge it from a power bank on the go – the port is hidden under a flap along with the microSD slot (no storage card is included). 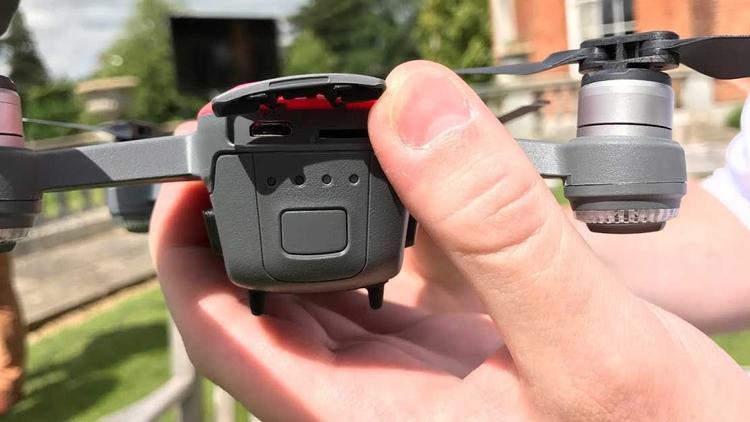 DJI Spark: What can it do?

Impressively, you can pop the Spark out of its box and have it flying in about 15 seconds. This is because you can use gestures so you only need to turn it on and double-press the battery button to enable this mode.

When the camera recognises your face, it will spin up the propellers and take off from your hand.

You then show it your palm to put it in PalmControl mode. In whichever direction you move your palm, the Spark flies that way. 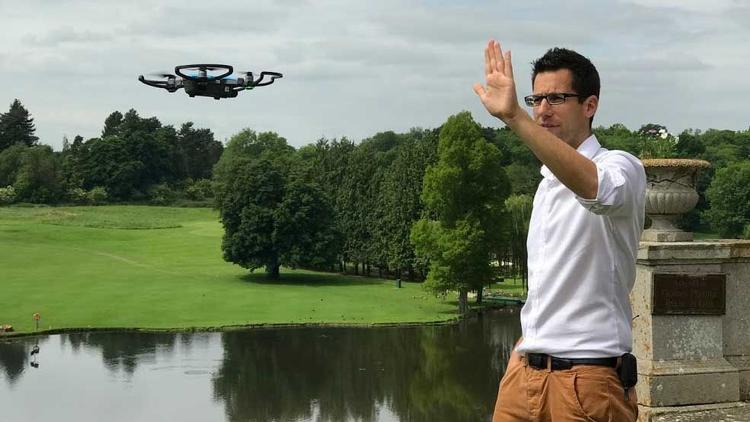 Hide your palm then slowly do a big wave and it will back off around 3m and fly up a bit. This is disabled indoors or when GPS signal is weak. You can mimic a picture frame with your fingers and it will flash its lights to give you time to strike a pose before taking a snap.

Hold your hands outstretched to form a ‘Y’ and the Spark will fly back to you, at which point you can hold out a flat palm for it to land on. It’s a bit unnerving the first time, but it really works. 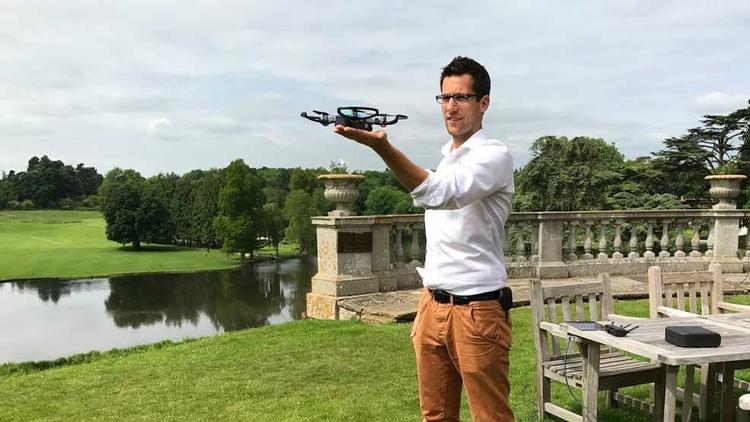 Thanks to the latest firmware update, you can now start and stop recording video with a gesture (raise one arm so it’s 45 degrees to the ground), and DJI has improved recognition of the wave gesture.

If you connect to the Spark’s Wi-Fi (the SSID and password are on a sticker in the battery compartment) then you can use all of the features in the DJI GO app.

Wi-Fi works to around 100m, which may be enough for you, and the app offers on-screen sticks so you can fly it manually. That’s tricky because there’s nothing to feel, so it takes bit of practice.

To use them you tap the one you want, draw a rectangle around you or the subject on which you want the camera to focus and then – when it’s locked on – tap GO. The Spark will automatically execute the manoeuver and record video at the same time so you don’t forget. A firmware update added the ability to adjust the distance for these, and the Spark can go further in QuickShots if you’re using the remote controller.

The drone automatically stops the recording and returns to you afterwards. If it looks like it might hit an unseen obstacle, you can tap the’ X’ to stop it, but it will use its obstacle avoidance (which, don’t forget, works only when flying forwards).

The two that you’ll use most are Dronie (a reveal shot, flying away and up from you) and Helix, which is a kind of corkscrew motion up and away from you – very cinematic and almost impossible to do manually while keeping the camera focused on you. Rocket it fun, too.

Here’s examples of all three. First Rocket. This is the original, unprocessed video from the SD card.

The great thing about the Spark is that a processed video (which speeds up in the middle) is created and saved to your phone as well. The quality is obviously lower, but it includes a soundtrack and is ideal for sharing straight to Twitter or Facebook.

Of course, there’s all the other modes you’d expect, including ActiveTrack and TapFly. The latter gives you two options: direction and co-ordinate.

The first simply causes the Spark to fly in the direction you’ve tapped on screen. Co-oridinate is more interesting as it makes it very easy to fly to an object you can see in the live video preview.

In all these modes obstacles will be detected and, if possible, avoided. This works only forwards and downwards, so it won’t stop the Spark crashing as it does a Dronie or Helix as there are no rear or side sensors.

Similarly, when returning to the home point it will detect and try to avoid obstacles. If you walk slowly towards it in gesture mode, the Spark will move backwards as it ‘avoids’ you.

Both cameras and infrared sensors are used on the front and underneath – the camera you can see below works like the Mavic’s and takes a short video when it takes off, then compares the scene it sees with this recording when it lands to try and get the exact spot. 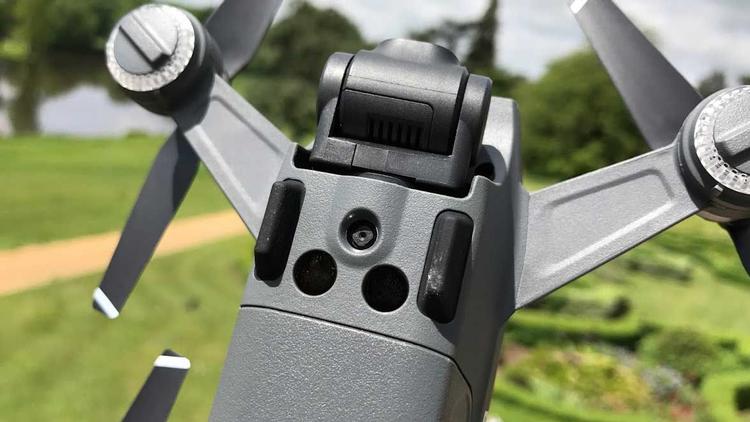 There are a couple of new photo modes: Pano and ShallowFocus. These are self-explanatory, but it’s great to see the former as it takes all the hard work out of shooting and stitching panoramas together. (They can be vertical as well as horizontal, too).

One final nice feature in the app is that you can make the gimbal point up or down by tilting your phone or tablet. You can even adjust the sensitivity so you can make nice smooth, slow movements as you fly.

Despite the Wi-Fi connection, the video preview is smooth and the Spark is very responsive to the controls.

Flying the Spark using the controller is the best way to do it, if you want manual control. It’s very similar to the Mavic Pro’s remote, and has fold-out arms which grip a phone so you can see the video preview (and a map).

It lacks the LCD screen of the Mavic’s controller, which is a shame, but it’s comfortable to hold and use.

Plus it adds two feature you can’t get  without it: a 1.2-mile range and Sport mode. Sometimes it’s fun to fly a drone fast, and in this mode the Spark will fly at up to 31mph (50kph). It’s exceptionally responsive, too.

The Spark can take 12Mp photos, but while they’re not the best-quality, they’re perfectly good enough for sharing. Unlike DJI’s higher-end drones, the Spark doesn’t let you shoot in RAW, or video in D-LOG. However, check out our tips for improving drone video and photos. 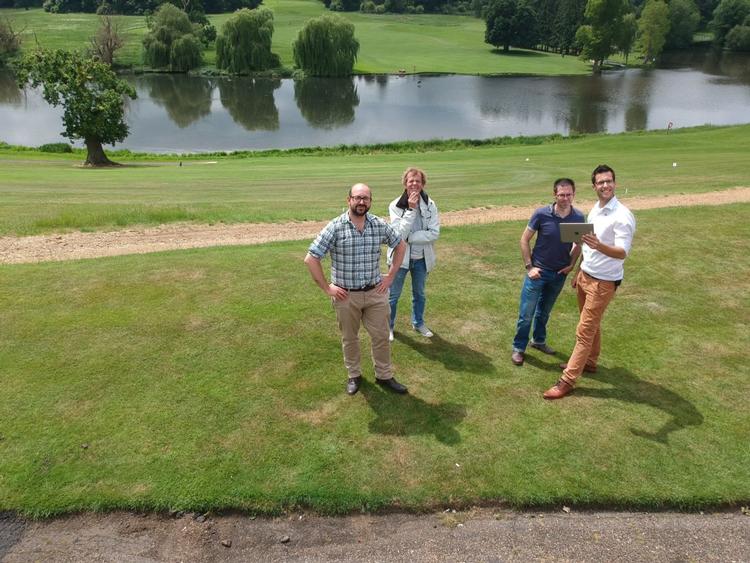 The Spark’s camera might look like the Mavic Pro’s but the highest quality is 1080p at 30 frames per second. Despite the two-axis gimbal, footage is pretty much as stable as the Mavic Pro’s. If you haven’t watched it already, check out the video at the top of the page.

The third axis (yaw – turning left and right) is stabilised by what DJI calls SmoothVision. This means the image is corrected by software, and it does a pretty ok job. However, whereas on three-axis gimbals yaw movements are damped, they’re much more noticeable in the Spark’s videos – you can easily spot it in the Helix QuickShot mode, for example. 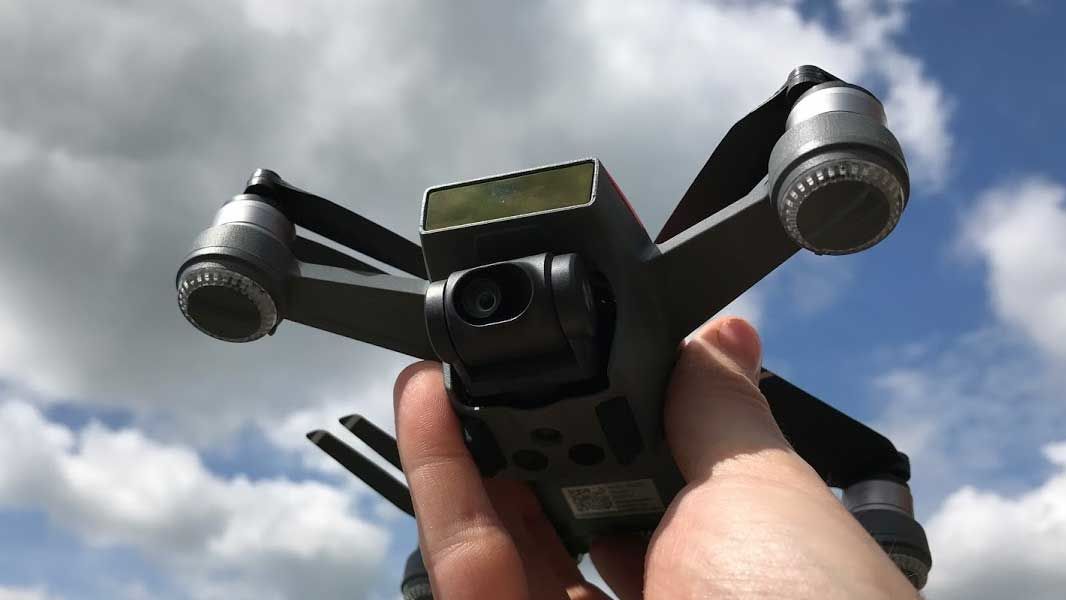 But as long as this doesn’t bother you, you’ll be pleased with the footage.

The 12Mp camera is fixed focus so you don’t have to worry about remembering to tap the screen to focus before taking any photos or videos as you do with the Mavic.

Of course, footage is less detailed than the Mavic Pro’s and you can’t shoot any slo-mo. Again, as long as this isn’t a priority, you’ll be happy with the quality from the Spark.