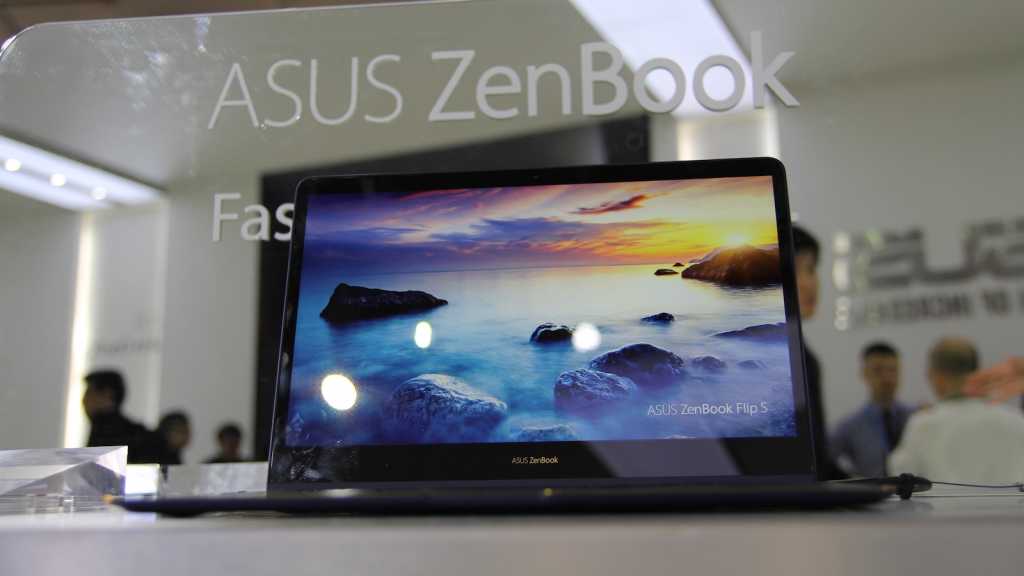 It’s not a laptop most people need but if you’re looking for a attractive convertible with decent specs and high quality build then the Asus ZenBook Flip S, on first look, appears to be a great option.

There’s no shortage of new laptops at Computex and we’re in Taipei to see them for ourselves. Just about everyone is making so-called ‘convertibles’ these days (see our comparison of the new Microsoft Surface Pro vs Samsung Galaxy Book for two of the latest rivals), but we’ve rarely seen a device as attractive as the new Asus ZenBook Flip S. Here’s our hands-on review. See also: Asus ROG Zephyrus review.

Although plenty of ROG gaming devices will be announced, Asus has introduced a range of new ZenBooks for those who like a nice shiny laptop. The ZenBook Flip S is also known as the UX370UA.

We don’t have UK-specific information but the Asus ZenBook Flip S will go on sale in September and has a starting price of US$1,099.

Should the laptop make its way to Blighty, we can expect a similar price in sterling – perhaps £999 at the cheapest, we think.

The firm also announced the ZenBook 3 Deluxe and ZenBook Pro which start at an extra US$100 and $200 each, respectively.

As you might expect, the new Flip S looks and feels a lot like ZenBooks that have gone before it. Asus has created a unique and recognisable style for the range which is highly regarded.

So it has a metal build with that circular spun brushed effect which we’ve loved for a long time. The Flip S looks particularly nice in the blue option complete with gold trim.

The main drawback here is that the surface attracts and shows up smudges and prints all too easily.

Provided you don’t mind giving it a clean every now and then, the ZenBook Flip S is an extremely thin and light convertible laptop. At 10.9mm, Asus claims it as the world’s thinnest and 1.1kg is very impressive for a 13.3in metal laptop.

This is partly due to a new 0.3mm ‘liquid-crystal-polymer’ fan to keep the device cool.

It’s a compact 13in laptop thanks to tiny ‘NanoEdge’ bezels and while other ZenBooks have a fingerprint scanner in the corner of the trackpack, the Flip S’s is cleverly hidden in the power button on the side.

As you would expect from the name, the screen on the Flip S can rotate all the way around thanks to 360 degree ‘ErgoLift’ hinges.

This kind of convertible is far more on the side of a laptop than a tablet since it doesn’t detach from the keyboard but the different modes can be useful at times.

As usual, we’re looking at the high-spec version so the ZenBook Flip S will go up to an Intel Core i7 (7th-gen) with 16GB of RAM and a 1TB SSD.

It appears that a lower-spec model will have a Core i5 and 8GB of RAM but we don’t know about storage – presumably it drops to 512GB.

You will get an impressive 13.3in screen with a Full HD or 4K resolution (3840×2160) which is touch enabled and you can use it with a new Asus Pen which we believe is an optional extra.

The sacrifice when a laptop becomes this thin is the ports you get. Instead, you get two USB-C ports and a headphone jack. Luckily a bundled Mini Dock gives you an HDMI port, USB 3.1 and a USB-C port that supports fast charging.

Other specs include Harmon Kardon certified speakers and a battery life quoted at up to 11.5 hours. The Flip S can fast charge via USB-C with reportedly 60 percent in just 49 minutes.

We’ll bring you a full review as soon as we’ve had a chance to properly benchmark the Flip S.