Ultimate Lightning McQueen is exactly that: the best version out there. It’s also by far the most expensive, and for some it will be unjustified. But for die-hard fans, you won’t find a better Lightning McQueen.

Kachow! Lightning McQueen is back – again. Sphero, a name you might know from other movie gadgets including the brilliant BB-8, has spent the past three years working on building the most realistic and lifelike McQueen you’ve ever seen.

We’ve spent some time with the car and a beta version of the app you use to control it.

You’ll be able to buy an Ultimate Lightning McQueen from Amazon, Apple, John Lewis and Disney stores from 15 June, just ahead of the release of Cars 3.

Seeing the new movie will be a lot easier on your wallet though, as you’ll get just £1 change from £300 if you buy an Ultimate Lightning McQueen.

The steep price means it’s not really aimed at kids, although no doubt plenty will want one. The more likely buyer is a gadget enthusiasts who is also a fan of the movie and has plenty of disposable income.

There’s a reason this is called the ‘Ultimate’ Lightning McQueen, though. The 10in model has unique motorised suspension that allows it to move just like the animated star of the Cars films.

It’s also fitted with a custom – and unique – windscreen-shaped LCD screen that brings Lightning’s eyes to life. The animations are perfect. 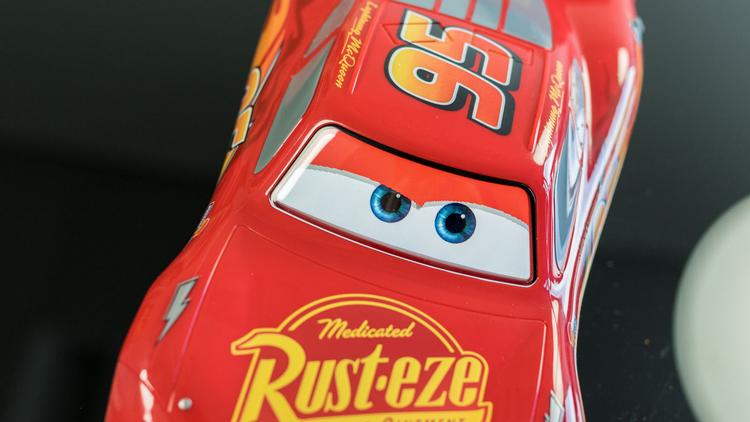 Plus, there are six capacitive sensors on the sides, roof, boot and bonnet (hood and trunk if you’re reading in the US) which make him react to your touch.

You even get some of the mod-cons from real cars, such as automatic headlights that turn on when it’s dark, and tail lights that act as brake lights when you stop. 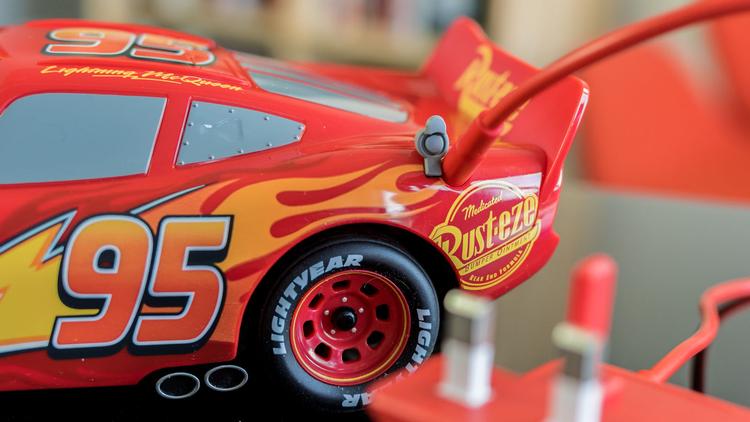 The level of detail is excellent, down to the position of the charging socket which is where the petrol – or gas – cap should be.

The car is mostly made of plastic, but the front bumper is rubber. This will absorb the impact of crashes better but more importantly, it allows Lightning’s animatronic mouth to move.

You can see exactly how much tech is packed inside in this teardown by Fictiv. 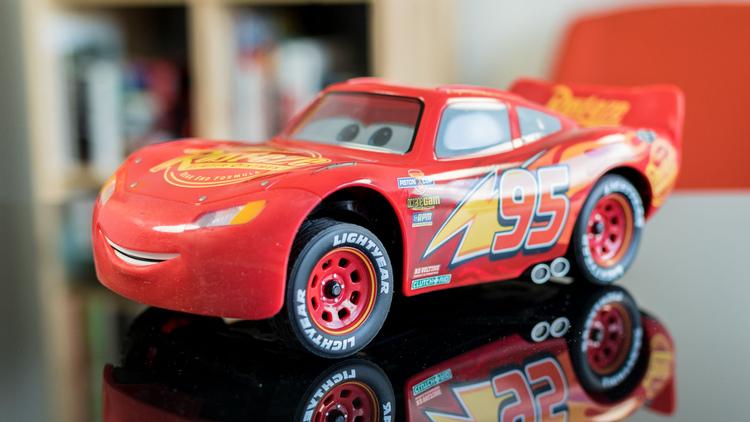 Like Sphero’s other devices, including the SPRK+, you control the car through the app, which is available for Android and iOS. An on-screen joystick responds to how far you push it in any direction, making the car drive quicker the more it moves from the centre.

It takes a little practice because it’s not simply an on-screen version of an r/c controller. Pull it back and Lightning won’t reverse; instead he’ll try and drive in that direction by turning and continuing to drive forwards. 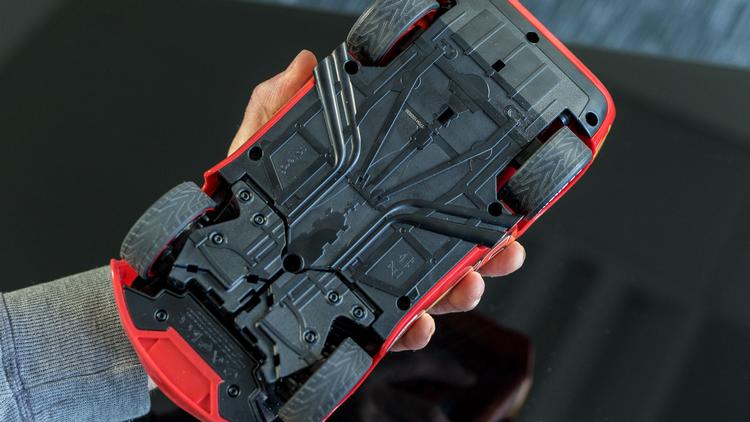 You can hold the reverse button and the car will go backwards in the direction you’re moving the virtual stick. It’s intuitive if you think about it, but you have to un-learn what you already know about traditional r/c cars.

Another button makes McQueen do donuts – skidding around in tight circles. A third gives him a speed boost, but this is by no means a super-quick remote-controlled car.

The built-in battery lasts for 40 minutes or so, which is longer than you might expect considering the screen and speaker.

You can check the battery level in the app, and it takes around an hour to recharge using the proprietary wall charger. The fact this is red is great: it’s impossible to mix up with all your other wall bricks. 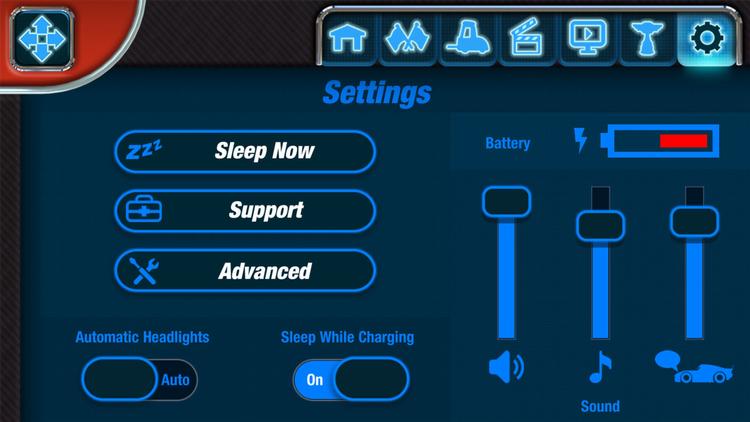 As Bluetooth is used, there’s a range of about 30m – this is plenty.

You can drive the car indoors and outdoors, but the smoother the surface the better. Donuts are best on wooden, laminate, concrete or tiled floors, but possible on short-pile carpet.

Surprisingly, though, it’s quite capable of driving on a thick-pile rug which we hadn’t expected considering the tiny ground clearance.

Apart from driving, you can make Lightning say all his catchphrases (plus a load more). There’s a button on the driving screen you can press to make him say a random phrase, but a separate section lets you build up a ‘script’ of a selection of them plus engine noises.

You can save and replay three different scripts. 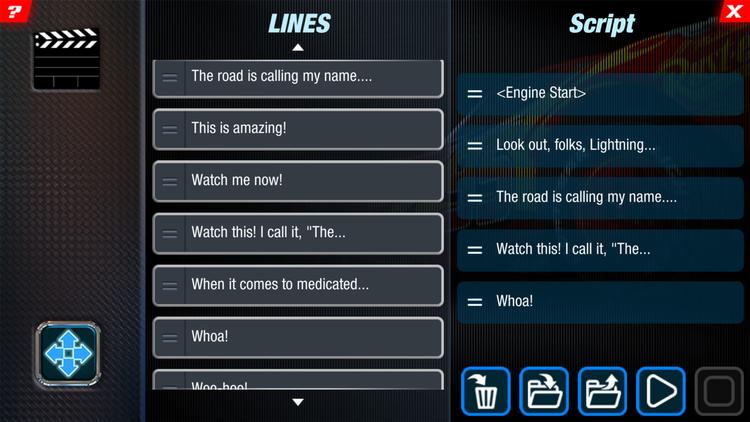 Each phrase (voiced by Owen Wilson) is accompanied by a different animation of the wheels and eyes. Plus, Lightning’s mouth moves in sync, too, which really adds to the wow factor.

The speaker is loud – you can control the volume via the app – and the quality of the recordings is excellent.

There’s also a fun pit-stop game – a mini game that has you servicing race cars with fuel, oil and tyres. The parts scroll across the top and you have to tap them, then the appropriate part required on a car that’s arrived for a pit stop. 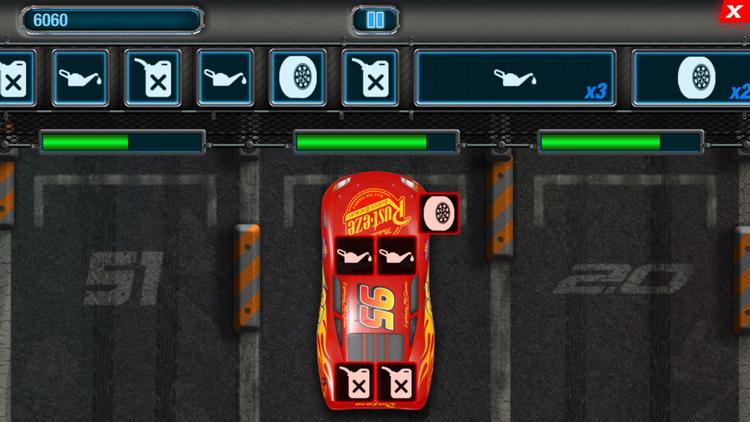 Lightning chimes in to tell you there’s an “Oil combo!” or “Don’t forget the gas” as you play.

There’s also a movie watch-along mode where he’ll commentate while you watch the original Cars film. This wasn’t enabled in the version of the app we tried, so the mechanics of how he syncs his commentary with the film is unknown. 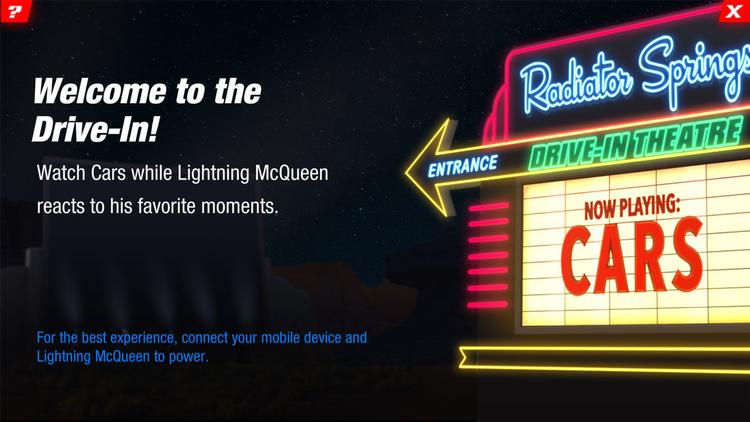 We’re told that in a future update, he’ll be able to watch the sequels with you as well.

There are a few little ‘easter eggs’ to find – we won’t spoil them for you. One, though, is an outcry when Lightning is picked up and shaken! 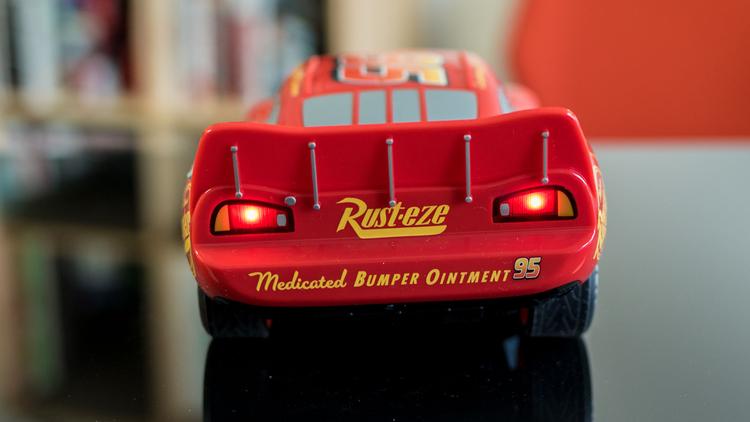