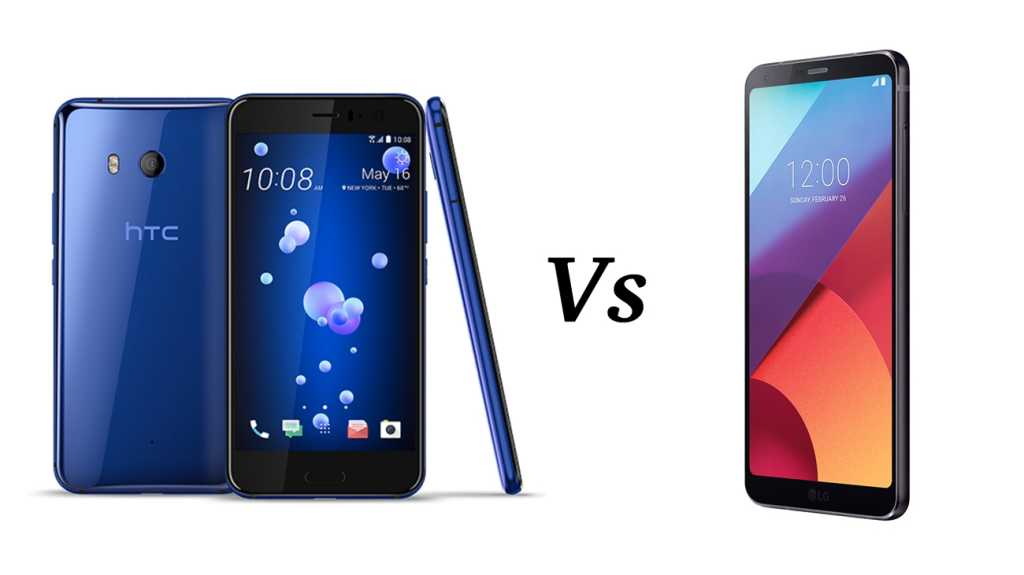 The HTC U11 is an interesting device that combines top-tier technology with a unique styling. The Edge Sense feature is still an unknown, but if implemented well it could be a significant advance for using the bigger and bigger phones that are arriving these days. As a complete package though it’s hard to look past the LG G6. The tall, high quality screen, slim bezels, and rapid performance add up to a thoroughly modern and impressive smartphone.

Android flagship phones are arriving at a rate of knots, with both LG and HTC unveiling new handsets in recent weeks. So which is the one you should be adding to your wish list? We compare the HTC U11 and LG G6 to see what they have to offer.

Which phone is cheaper?

The LG G6 is available SIM-free for £649 at John Lewis and other retailers.

You can of course spread the cost of the device by opting for a Pay Monthly plan with many of the UKs mobile providers. See also: Best phone deals 2017

HTC’s new U11 device is currently available for Pre-order directly from HTC for £649, with an expected shipping date of June 1st 2017.

Which is best designed and built?

With the G6 LG is scurrying to make up for the ground lost with its odd, modular, G5. Gone are the plug-in bits and pieces, replacing instead with a gorgeous design that removes most of the bezels so that all you see is that impressive Quad HD 5.7-inch screen.

LG has gone with an 18:9 aspect ration, which in real terms means the display is taller than 16:9 that has appeared on many phones for a while now.

The U11 features a slightly smaller Quad HD 5.5-inch LCD5 screen, which might not be quite as eye-popping as some AMOLED rivals, but is still an excellent panel.

The LG G6 may bear a bigger display, but due to the lack of bezels it’s actually smaller in size than the U11, as you can see from these dimensions.

In the hand the G6 is a very comfortable device that can actually be used one-handed for quite a few tasks. Not bad at all for a large phone.

The HTC U11 might be slightly bulkier but it’s perfectly suited for two hands. The chassis itself does boast a ‘3D liquid surface’, which is a moulded glass frame with curvy edges and vibrant colours. The effect is quite striking and would certainly make the U11 stand out from the crowd.

Liquids of another sort are also no concerns for the U11, as it comes with an IP67 rating that means you can submerge the device in up to 1m of fresh water for up to half and hour.

The LG G6 bests this with an IP68 rating, which enables users to continually use the device underwater and at greater depths than 1 metre.

Both handsets have fingerprint sensor, with the U11 placing its version on the home button, while the G6 has it around the back beneath the camera.

What are their specs and features?

Flagship phones tend to arrive with flagship components, and for the most part that remains true with these devices.

One interesting decision taken by LG is to include a Snapdragon 821 processor rather than the latest iteration – the Snapdragon 835 – that’s found in the HTC U11 and other units such as the Samsung Galaxy S8.

LG says that this is a deliberate choice due to the 821 being a processor that is mature and can now be pushed to its limits by its engineers. This could well be true, but if you want the latest silicon on offer then the HTC has the edge.

Speaking of edges, the U11 has a unique feature up its sleeves, or flanks anyway. Edge Sense allows users to squeeze the sides of the device to control certain functions. This could be launching the camera, turning of the flashlight, or a number of other options that can be set in the menus.

It’s a clever idea that could make larger devices more easily controllable by one-hand. We’ve yet to have any serious time with the U11, but when we do this will be the feature that gets the most attention.

Storage options are pretty sparse on these handsets, with the G6 offering 32GB and the U11 going with 64GB, but both come with Micro SD card slots that can expand these totals to much higher amounts.

Audio is an area that sees a parting of ways. In Korea the LG G6 includes and internal DAC for HD audio, but sadly that model won’t be making its way to these shores. Instead the G6 has a standard sonic output, but at least there’s a 3.5mm headphone jack to ease the disappointment.

HTC has gone big on audio in the U11. Firstly they’ve removed the traditional headphone port (boo!) and instead they’ve put a USB-C to 3.5mm adapter in the box. But this isn’t any old adapter. No, it also doubles as a DAC which can send HD audio to your ears. So there’s an actual, viable, advantageous reason for having it there (hooray!).

Here’s how the main specs compare:

Which has the best cameras?

It’s hard to find a bad camera in a top tier smartphone these days, and neither of these models will be an exception to this rule.

LG has two 13mp units in the rear camera assembly which produce excellent results. The device can record HD video at 60fps, and Ultra HD at 30fps, plus there’s the usual HDR support for still images.

HTC boasts the highest ever DxOMark score awarded to a smartphone, with the U11 racking up a total of 90. This is down to its 12mp UltraPixel 3 camera that comes equipped with OIS, UltraSpeed Autofocus, and an f/1.2 aperture.

Either way you’re getting a seriously good camera, not matter which phone you choose.