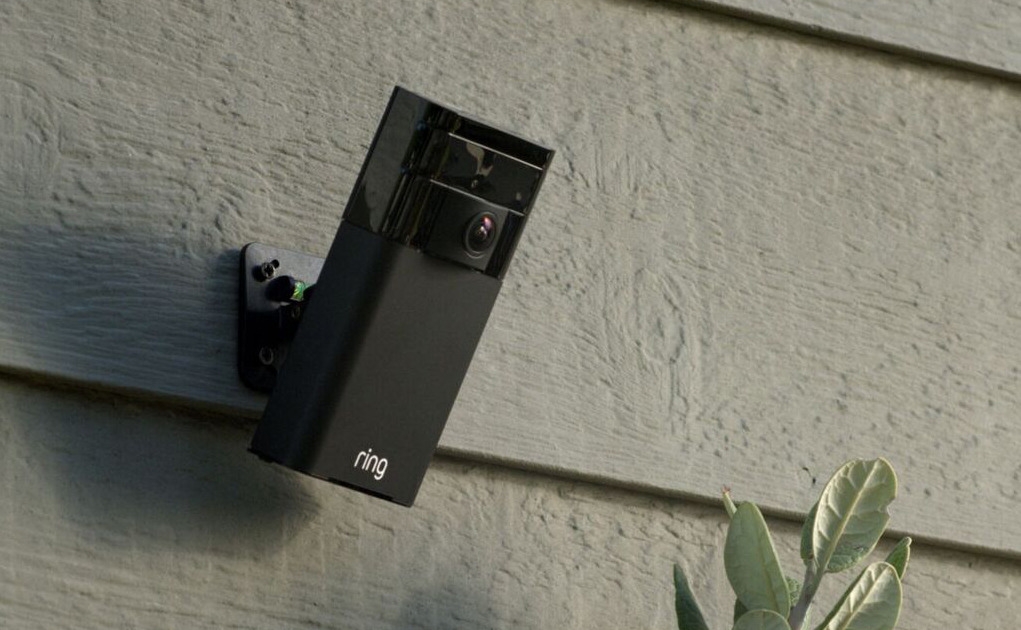 Ring’s Stick Up Cam is a smart security camera designed for outdoor use. Here’s our review.

While home security systems were once expensive and complicated to install, the introduction of smart home technology has made it much simpler. Now it’s easy for users to set up a home security system that can be monitored via smartphone, allowing users to keep an eye on their home while they’re away. One such device is the Ring Stick Up Cam.

The easiest way to describe Ring’s outdoor security camera is to say it looks just like the Ring doorbell with the omission of the button beneath the camera lens, and measures in exactly the same at 12.65cm x 6.17cm x 2.21cm. It has the same rectangular body with a slightly curved front and a generally nondescript look, with hidden access to the microUSB port on the rear.

It’s completely wireless, making installation a much easier process. Don’t worry about rain and snow either, as the Stick Up Cam is weatherproof too (just make sure the cap is on the microUSB port on the rear!).

It may not look as sleek and stylish as other security cameras on the market, but when it comes to outdoor cameras, do you really want something that looks expensive and draws attention to itself? We sure don’t. 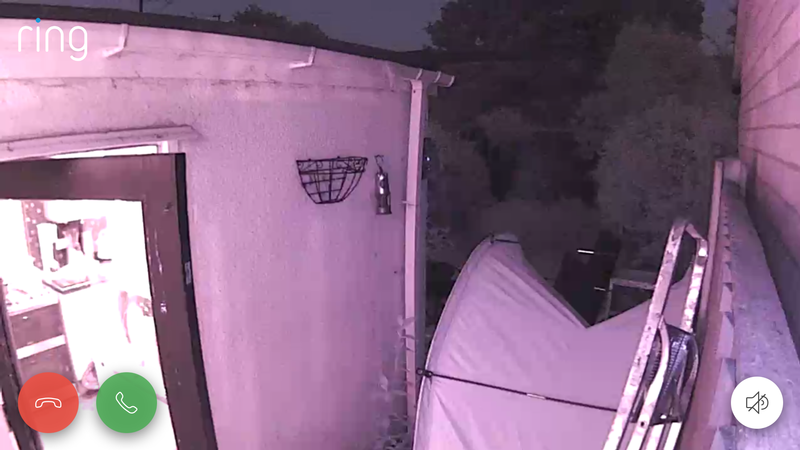 Along with the main Stick Up Cam comes the hinge system, comprised of two parts. The main part is the hinge system that connects to the camera itself, and is attached by screwing the hinge into the rear of the camera. You’ve got three options available: top, middle and bottom, depending on where your camera will be secured.

Ring provides a setup video where it talks you through the various situations where you’d be required to use the different hinges – if you’re confused about which to use, the video should help clear things up.

The second part of the hinge system is a quick release, allowing the security camera to be quickly and easily removed from the wall. It’s ideal if you choose to power the camera by built-in battery rather than solar power or constant power, which we’ll come to in more detail below. Of course, it’s not ideal for everybody as it also means it’s easier for potential intruders to remove so Ring has made it possible for the hinge system to be used with or without the quick release.

One small complaint about the hinge system? It isn’t very ‘stiff’, meaning it can be difficult to correctly position the camera as it doesn’t hold it in place. There’s also no way to remotely move the camera, a feature offered by some similarly-priced smart security cameras.

Read next: How to make your home a smart home

Admittedly, the 720p cap is pretty surprising when similarly priced cameras like the Nest Cam Outdoor offer 1080p video, but it’s worth bearing in mind that most smart security cameras upload video footage to servers at 720p regardless. Overall video quality is still decent enough to see what’s going on – as long as there’s decent Wi-Fi. In situations where Wi-Fi is poor, overall quality can be effected, as is shown in the below screenshot. 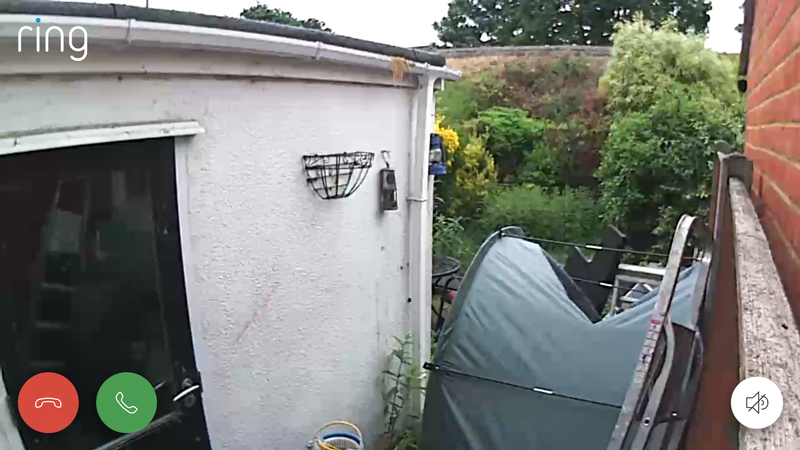 Also on offer is infrared night vision, allowing you to keep your home secure throughout the day and night. Considering that the camera is fairly small and runs on battery power, the infrared light travels quite a distance; we were able to see most of our garden in the middle of the night, and have no complaints about the NV capabilities.

Motion detection is a little different compared to others in its category. Via the Ring app for iOS and Android, you can configure the motion zones as mapped out in the app,rather than selecting an area you want to include or exclude from the image itself.

You just select the zones they’d like monitored. It’s a bit of trial and error then, but a handy feature if, for example, constant movement from a nearby road triggers your camera. 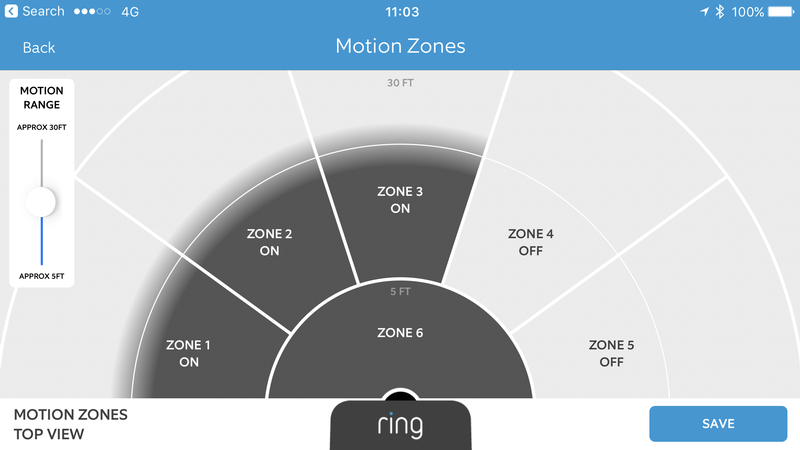 Once motion is detected, users are notified via the Ring app for iOS and Android, or via any connected Ring Chime (sold separately). Now, if you pay for the monthly cloud subscription (£2.50 per month per device, or £8 per month for unlimited devices), the motion will be recorded and uploaded to Ring’s servers, ready for access from the app for via a PC or Mac.

The recordings will stay secure on Ring’s servers for six months before being deleted, with users able to download important videos to their PC/Mac/smartphone/tablet.

There is no built-in storage so unless users opt for the paid cloud storage subscription, there’s no way to look at past events. With that being said, £2.50 / $3 per month is actually one of the cheapest cloud-based storage plans available for smart security cameras with others charging a lot more per month.

One feature that separates the Ring Stick Up Cam from most other outdoor security cameras on the market is two-way talk: using the built-in speaker and microphone, you can hear and speak to those that you can see on camera. While it’s not as clear as a phone call, it can come in handy in a number of situations. It’s a feature that isn’t available in many outdoor security cameras so if two-way talk is important to you, the Stick Up Cam is a decent option.

While it might not be the most interesting aspect of the camera, let’s briefly discuss power options. As mentioned above, the Ring Stick Up Cam is completely wireless and is powered by a built-in 5,200mAh battery. While Ring claims that the Stick Up Cam can last a whopping 12 months on a single charge, we’ve not found this to be the case. 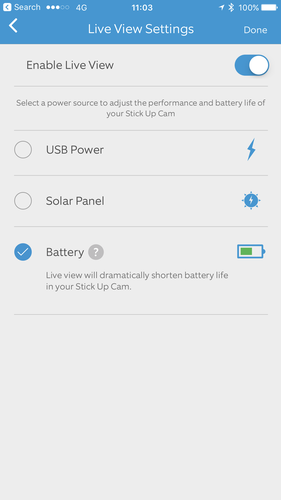 Running off standard battery power, the Stick Up Cam lasts around 6-8 weeks per charge, although this can vary depending on how often you access the Live View, which has a negative effect on battery life. Users also have the option of providing constant power via the provided 13ft USB cable, but it can make the setup look a little messy.

The best option? Solar power. The Ring Stick Up Cam is one of a small number of outdoor security cameras that feature support for solar panels that can recharge the battery on a daily basis, negating the need to charge it every few weeks or hard-wire it (as long as where it’s placed gets a lot of sunshine!). It doesn’t come with the Cam though; it costs £49 from Amazon and $34.99 from Amazon US.