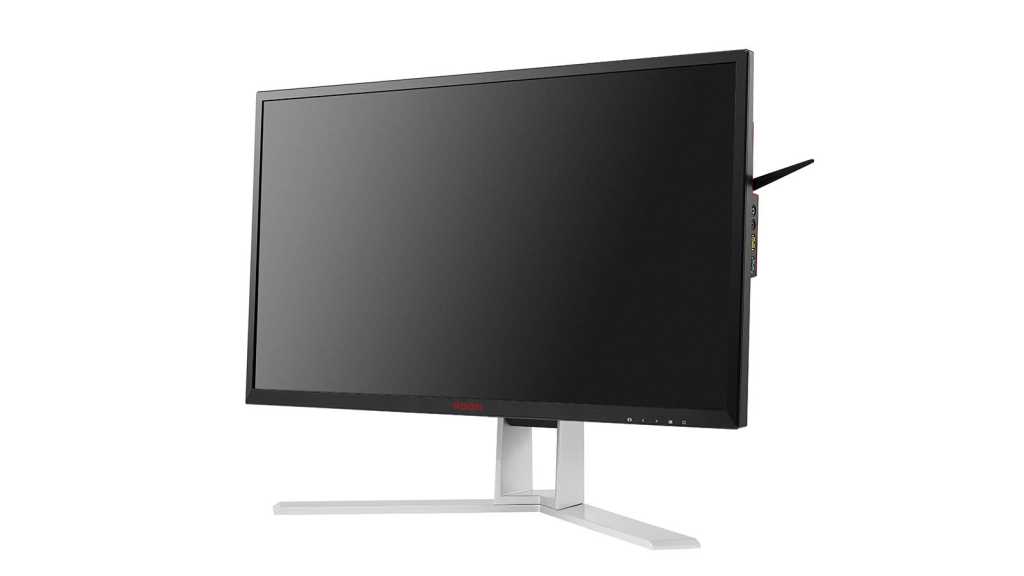 If it weren’t for the eye-watering price, we’d recommend that every gamer got one of these incredible screens. Punchy colours and G-Sync smoothness is a very tempting combination, especially when delivered in such a gorgeously engineered package.

Realising that the hard-core gamer wants flexible sync, better than 1080p resolution and eye-popping colour saturation, AOC has answered with the AGON AG271QG.

It’s a monitor that has but one quarry: the truly serious gamer. Because, realistically, those that don’t play fast-paced titles on a high-powered PC platform probably wouldn’t stump up the money that AOC is asking for this one.

AOC makes a sizeable range of AGON models from the affordable AG241QX up to the top-of-the-line AG271QG reviewed here.

The reason that this design is the AGON flagship and not the Curved UltraWide AG352QCX 35” model is that the AG271QG seemingly delivers the impossible: a G-Sync capable screen that uses IPS technology!

Don’t forget to check out our roundup of the best gaming monitors, too.

AOC’s AGON branding reminds us of the poster graphics for Disney’s Atlantis: The Lost Empire, using the form of a classical ‘A’ but without the crossbar. But the AGON ‘A’ isn’t just on the box and promotional material but emblazoned over the AG271QG in many other places.

A red stretched inverted version covers the back, and the wide-spanning foot is another use of the motif. That support foot is a triumph of precision engineering, made almost entirely of cast aluminium. It provides a wide range of vertical movement, along with 20 degrees of twisting.

And, it can even rotate vertically, for those with the budget for three screens and the ambitions to render multi-panel titles in portrait mode.

As an aid to you remembering your favourite vertical placement, AOC integrated a scale labelled the ‘Ergo Dial’ into the support pillar. It’s a nice touch.

One minor disappointment is that AOC couldn’t find room for a PSU inside the case, and instead a large power brick is included for you to misplace somewhere behind your desk.

The standard inputs are one each of HDMI 2.0 and DisplayPort 1.2, audio jacks for both headphones and microphone, and a full USB 3.0 hub with four downstream ports.

One oddity is a pivoting spike located near the audio inputs and two of the USB ports on the right-hand side. It’s for supporting a pair of headphones when not in use, though our immediate reaction was that it looks like it will be broken off easily.

That point aside, the AG271QG is made to exacting standards and demonstrates that AOC can make high-end products that well represent the high degree of polish that this price point rightfully expects.

The panel inside, however, goes beyond expectations in so many ways.

On initial inspection, a 27” IPS panel with a natural resolution of 2560 x 1440 might not seem revolutionary – until you realise that it also supports NVIDIA’s G-Sync technology for up to 165Hz refresh rate.

Most screens have a standard refresh, often 60Hz, irrespective of how many frames per second that their video card can generate. Due to the variable complexity of the 3D worlds most games generate, frame rates don’t remain exactly 60 fps, unless you tell them to respect the refresh even if they can generate more frames.

G-Sync allows the video card to dictate the refresh, up to 165Hz, and the monitor will synchronise avoiding screen tearing and enhancing the overall experience significantly.

The performance of this screen is nothing short of remarkable. 100 percent of sRGB and 79 percent of Adobe RGB are the colour performance we’d expect from a good IPS panel, but not one that could also achieve a 4ms refresh time and 165Hz.

Yes, you can get TN panels with 1ms refreshes, but not with the colour profile or viewing angles of IPS technology.

The result of these capabilities is that along with silky G-Sync mode you also get excellent saturation that doesn’t hide details in the shadows or blow detail out of a bright sky. The effect is that game graphics reveal more texture and nuisances that other screens just mask, and it’s effectively lag-free.

For whatever reason, the display we were sent was a little brighter at the top right than the bottom, though devoid of any significant backlight shadows.

One perceptible downside to this design is that it does consume more power than a typical IPS panel of this scale and resolution. The Energy rating is only a ‘C’, and with full brightness set it guzzles 48 watts, somewhat on the high side for a 27in monitor. But relatively, this is not much power, and certainly just a fraction of what a gaming PC rig will be drawing alongside the monitor.

If you use an AMD graphics card, AOC has an adaptive sync brother, the AGON AG271QX that uses TN panel technology without G-Sync hardware. That costs about £399, underlining just how much this special IPS panel and NVIDIA’s extra sauce adds to the cost.

Other than the price there are only a few of things about this monitor that we didn’t care for, one being the aforementioned power brick. The other is AOC’s old and clunky menu system that badly needs both a visual and functionality overhaul.

We can’t imagine many gamers would use the mounted 2-watt speakers, but they are better than most inclusive designs if you must.

Beyond those minor points, the AG271QG is a superb gaming monitor that in a single bound redefines our expectations of what IPS panels can do.