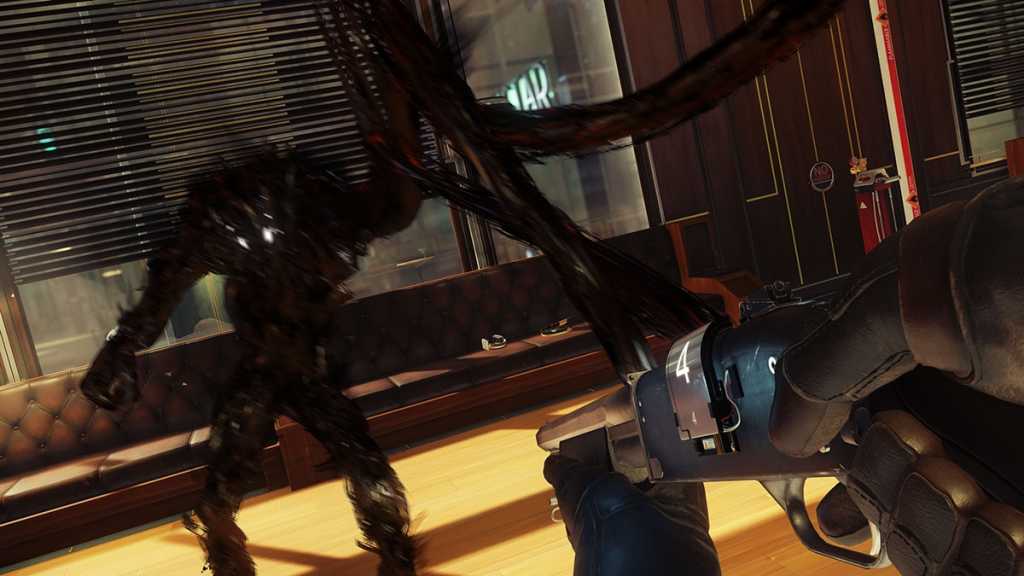 Prey is brilliantly put together, with tense combat, a deep setting to explore, and the potential for amazing variation in play styles. It’s only let down by a story that falters just as it seems to be taking off, and the fact that most of its best ideas have simply been borrowed from somewhere else. Prey does almost everything well – it’s just hard to shake the feeling that it’s all been done before.

“It’s like BioShock but…” has become a bit of a well-worn descriptor over the last few years, as countless games have attempted to imitate the blend of first-person shooting, post-apocalyptic narrative, and mind-bending twists that made so many of us fall in love with Rapture all those years ago.

Prey, from Dishonored devs Arkane Studios, is the latest entry in the micro-genre. This time it’s like BioShock but in space – the art deco underwater city of Rapture swapped out for the art deco space station of Talos I, Splicers swapped for Typhon, and Plasmids for Neuromods.

The bad news is that Prey never quite rises above imitation, and struggles to innovate on the BioShock formula. The good news is that, derivative as it may be, it’s so well-crafted, and so fun from moment to moment, that you’re unlikely to mind too much.

If you’d rather a digital copy, you can grab it directly from Steam, the PlayStation Store, or the Xbox Store.

Oh, and PS4 and Xbox players can also try out the first hour of the game through the free demo, and progress will carry over if you decide to buy the full game. PC players don’t get the demo though, sadly.

Prey opens with a glittery vision of the future. As Morgan Yu (either male or female, your choice) you awake in a shiny sci-fi apartment in the year 2032, to a call from your big brother Alex welcoming you to your first day on the job in the family company, Transtar, and reminding you to come in for a few induction tests.

Anyone who’s seen footage of the game can probably guess that this cheery facade doesn’t last long, but it’d be a crime to spoil why – the unfolding of plot in the game’s opening hour sees it at its finest, echoing science fiction luminaries like Philip K Dick as it barrels through revelations and seamless world-building.

By the time that hour is out of the way, the plot proper is in place: you’re aboard the derelict space station of Talos I, fighting through hordes of extraterrestrial opponents and trying to figure out what the hell happened.

That would be the Typhon, shimmering black nightmares that look like the ominous gloop from Prometheus if it decided to grow legs and murder everyone. They come in various forms, from humanoid Phantoms to mind-controlling Telepaths, but are at their best in the game’s basic enemies: Mimics.

These four-legged space spiders are an obvious homage to Half-Life’s Headcrabs (another clear influence – it’s no accident that the first weapon you find is a wrench), but with two crucial differences: 1) they can teleport, because screw you; and 2) they can shapeshift into any object their size or smaller.

This is arguably Prey’s chief innovation, and it’s brilliant. See two coffee cups next to one another? One might be a Mimic. That life-preserving Medkit tantalisingly waiting in the middle of the room? Mimic. Did that cardboard box just shuffle slightly? Mimic.

While they might seem like nothing more than the embodiment of the jump scare, the real genius of the Mimics is the distrust it engenders in you, the suspicion with which you have to look at everything around you. It also rewards the cautious: catch a Mimic off guard and attack it while its disguised and you’ll do critical damage – suddenly firing wildly at everything around you is a legitimate tactic.

Naturally you get a few different weapons to take the Typhon out. Conventional options are surprisingly limited – just a pistol and shotgun – but more outlandish options include the Q-Beam, a glorified laser gun; Recycler Charges, grenades which suck in nearby objects (and enemies) and convert them into crafting material; and Nullwave Transmitters, which block psychic attacks – a frequent threat in the late game.

Best of all is the GLOO Gun, a distant descendant of Half-Life 2’s Gravity Gun, which serves as both puzzle-solving tool and offensive weapon. It fires blobs of a tough adhesive, which can be used to plug leaks, build platforms, and stop enemies in their tracks – leaving them more vulnerable to your firepower.

Weapons can all be improved with upgrade kits you’ll find dotted around the station, while ammo and other useful bits of kit can be both found and crafted at the occasional Fabricators – as long as you’ve got the appropriate Fabrication Plan. Crafting requires resources that you get by breaking things down at Recyclers, so you tend to follow a cycle of filling and purging your inventory as you gather items, recycle them, and use them to craft more useful things.

It’s not just weapons though – you can also upgrade yourself. Neuromods are nasty little needles you have to poke into your eye, but the upshot is that they let you learn new abilities. In game terms, they’re the resource you collect to progress through the skill tree.

It’d be impossible to max out every skill on a single playthrough, so this is where you have to start deciding your playstyle. Do you invest heavily in hacking skills to unlock areas of the ship and control turrets? Or maybe you upgrade your combat skills, or max out your stealth. Later in the game you get the chance to unlock Typhon powers that open up new styles of play – but once you use them, the station’s defensive measures might start to see you as a threat.

This is the closest that Prey gets to its promise that you can play it your way, with the clear potential for varied styles. These decisions also affect your ability to navigate the station though, as different skills might let you access different areas – here Prey takes heavy influence from the Metroidvania genre, encouraging backtracking to explore old areas with new abilities.

Like Rapture before it, by the time you get to Talos I it’s long past saving – your job is to sift through the wreckage and survive as best you can. As if to further invite comparison, the station bears the same retro-futurist art deco stylings as Andrew Ryan’s underwater utopia, though there are hints of a more interesting aesthetic in touches like the player’s tessellating triangular visor or the glowing network of alien ‘Coral’ that slowly seeps across the station.

Still, the game looks beautiful throughout, and even on a pretty mid-range PC we enjoyed solid performance other than some occasional frame rate stutters. We did encounter a few bugs though, including a weapon disappearing from our inventory, a character sprinting on the spot during a major cutscene, and misfiring sound cues – a particular shame, because they squander Mick Gordon’s otherwise excellent score, a dynamic mix of ambient electronic, pulsing EDM, and twangy guitar themes reminiscent of Gustavo Santaolalla’s work on The Last of Us.

As you explore, you’ll meet a few of Talos I’s survivors, and find the bodies of an awful lot more who didn’t. Echoing BioShock once again, you’ll find out more about them through notes and audio logs dotted around, slowly building up a picture of the station’s inhabitants, their relationships, and the mysterious research they carried out.

This is one of the area’s where Prey’s emphasis on imitation begins to show at the seams. Even in the original BioShock, audio logs were a bit of a narrative crutch, and ten years (and countless imitators) later it just feels tired and lazy. That’s not helped by the fact that few of the side characters’ arcs are especially fascinating or memorable – especially when the game reaches for a poignancy it can’t quite manage.

The main plot proves a slight disappointment too. After a breakneck opening hour it slows dramatically, settling mostly for requiring you to repair or access various systems on the station, which serves as little more than an excuse to drag you round Talos I’s various areas. The game’s final hours have more interesting developments in store – though the final moments are destined to be controversial – but that’s not enough to make up for the fact that most of the time it’s just too easy to forget what you’re meant to be doing, or even why.

That’s really where Prey shows the limitations of imitation. Standing so squarely in BioShock’s shadow invites comparisons it can’t quite bear. That’s especially true of the narrative and writing – undeniably weaker than BioShock’s – but also in the core gameplay systems, which, while polished, can’t help but feel slightly stale a decade on.