The New Nintendo 2DS XL could easily have been superfluous, but instead Nintendo has put together something pretty special. The firm has combined the best bits of its existing handhelds and made various improvements to create a really desirable bit of kit – stubby stylus excepted. Throw in the friendly price point, and this easily the best 3DS yet.

Nintendo is sticking to its slightly odd naming system with the (deep breath) New Nintendo 2DS XL, but the name does at least make sense: this is new, it’s from Nintendo, it’s got 2D screens, and they’re bigger than they used to be.

The new console is out now, but we were lucky enough to get our hands on the hardware early to let you know what you think ahead of the release – and how to buy it if it’s grabbed your interest.

And if you want to see how it stacks up against the other 2DS and 3DS models, take a look at our 3DS buying guide where we break down the differences in more detail. 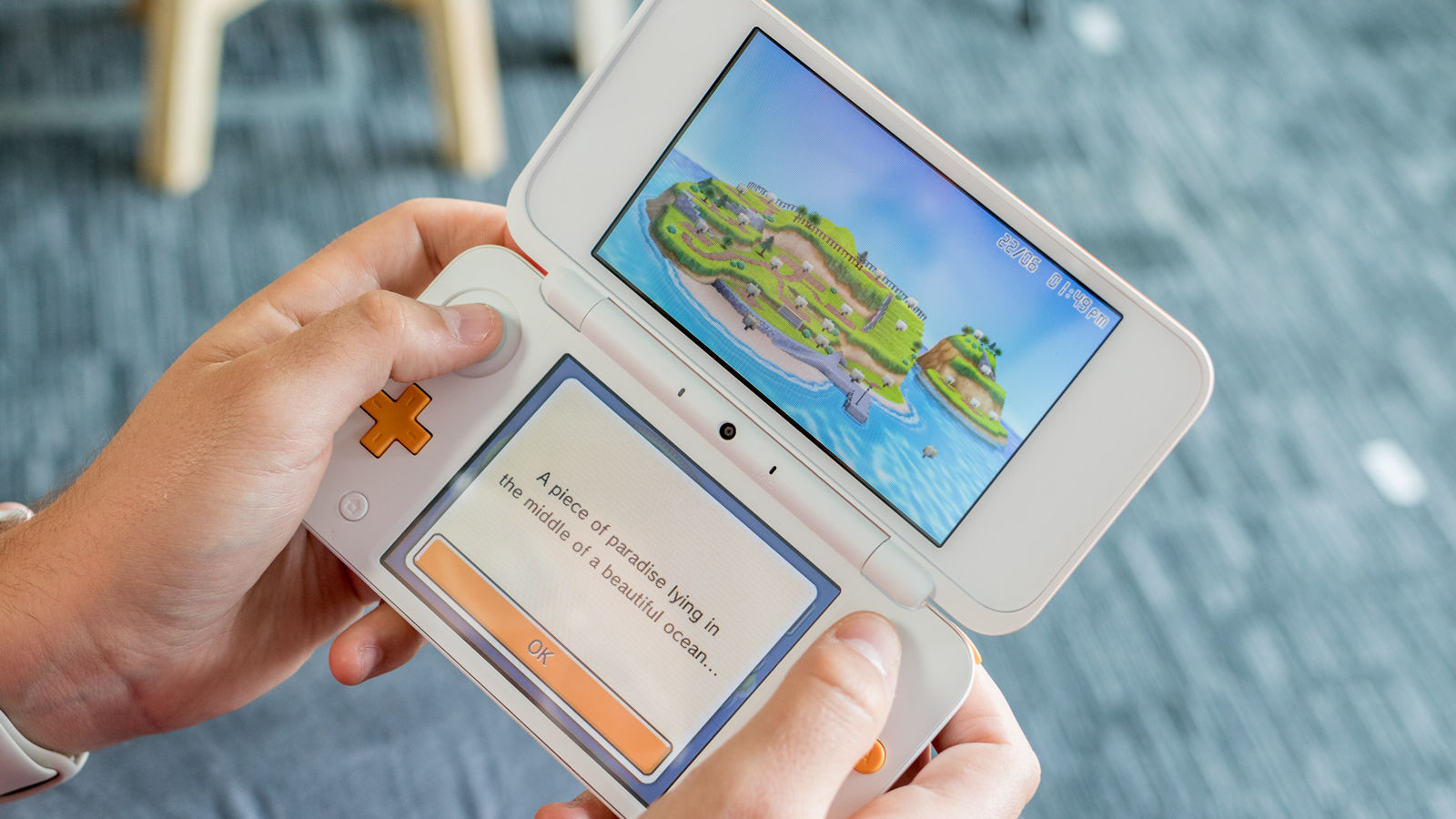 The 2DS XL is essentially a fusion of the firm’s existing handheld consoles – the original 2DS and New 3DS XL. It takes the concept of the 2DS but gives it a huge design overhaul to make it more like the 3DS.

The main difference is that the 2DS XL uses the traditional folding clamshell design, rather than the flat all-in-one design of the original 2DS. While we actually find the 2DS very ergonomic, this change will be greeted by many fans and comes with a few advantages.

It means you can carry the console around without the need for a case, and also means you can adjust the angle of the screen to your liking.

There’s also the benefit that when closed, the 2DS XL takes up a lot less space than the 2DS, making it much more portable – you can actually comfortably fit it in a trouser pocket (depending on the trousers, naturally). 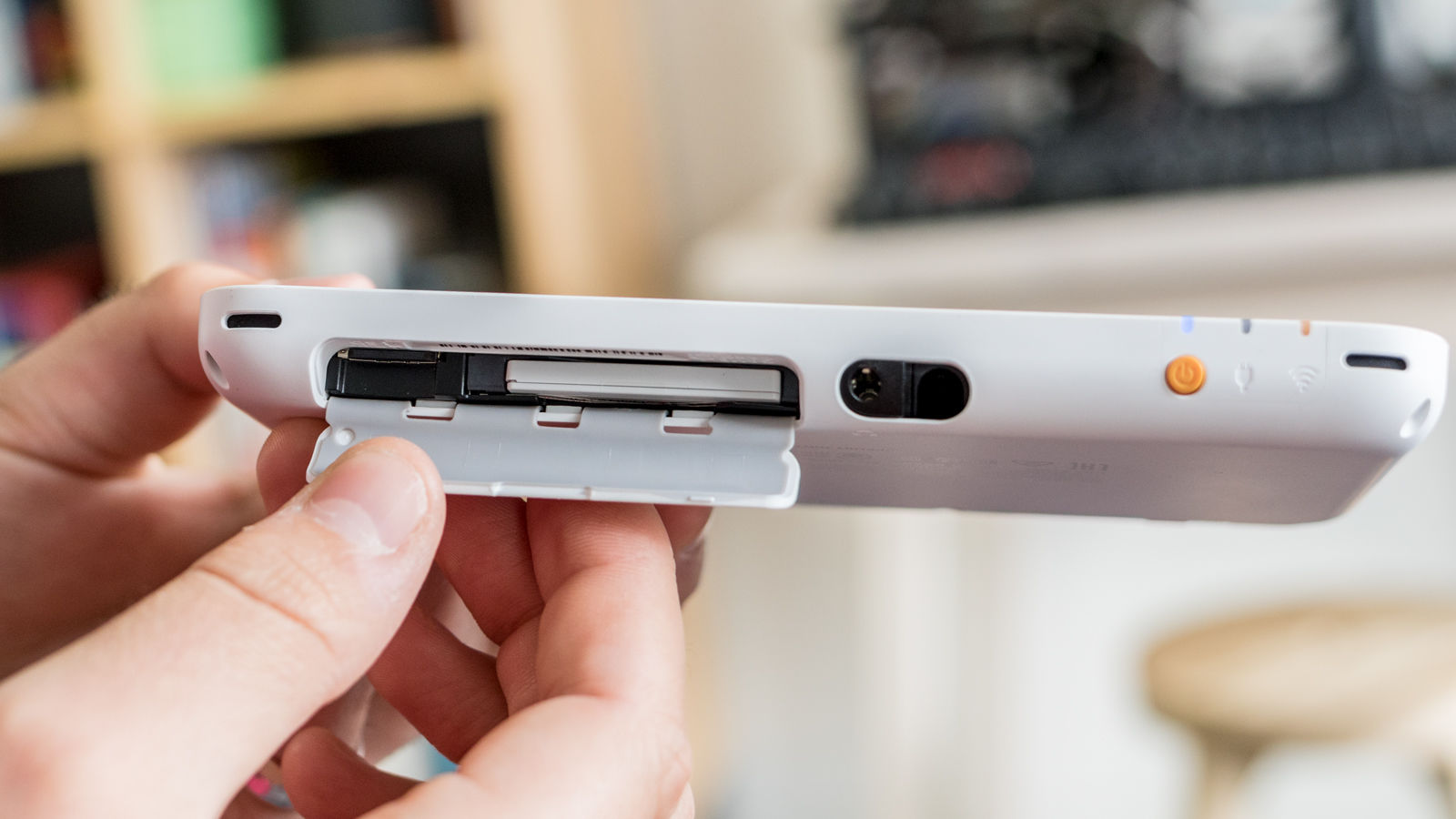 Nintendo could have easily just released a 3DS XL with a 2D display, but it’s gone a lot further, making various little tweaks and refinements that combine to make quite a difference.

First of all, you might not notice, but Nintendo has moved the home button and front facing camera so that the bezels around the two screens are much smaller, leaving the device about 7mm shorter than the 3DS XL. This means the 2DS XL not only looks more stylish but the smaller body means it’s lighter.

In total it’s about 70g lighter than the 3DS XL, and almost exactly the same as the original 2DS, at 260g. This helps not only for longer gaming sessions but especially when you’re holding it one-handed with the stylus in the other for games like Hey! Pikmin.

One of the other major design changes is that the game cartridge and microSD card slots are now both tucked under a flap on the front edge, meaning there’s no longer a risk of popping your games out by accident.

The downside of course is that it takes a bit longer – and is decidedly more fiddly – to swap games out, but since you’ll only be doing that every now and then in practice, that’s not too big a price to pay.

Oh, and as with other recent DS models, the 2DS XL comes with a 4GB microSD included for storing games, save data, and other files – you’ll find it already installed in the machine when it arrives, in case you’re struggling to find it in the box! 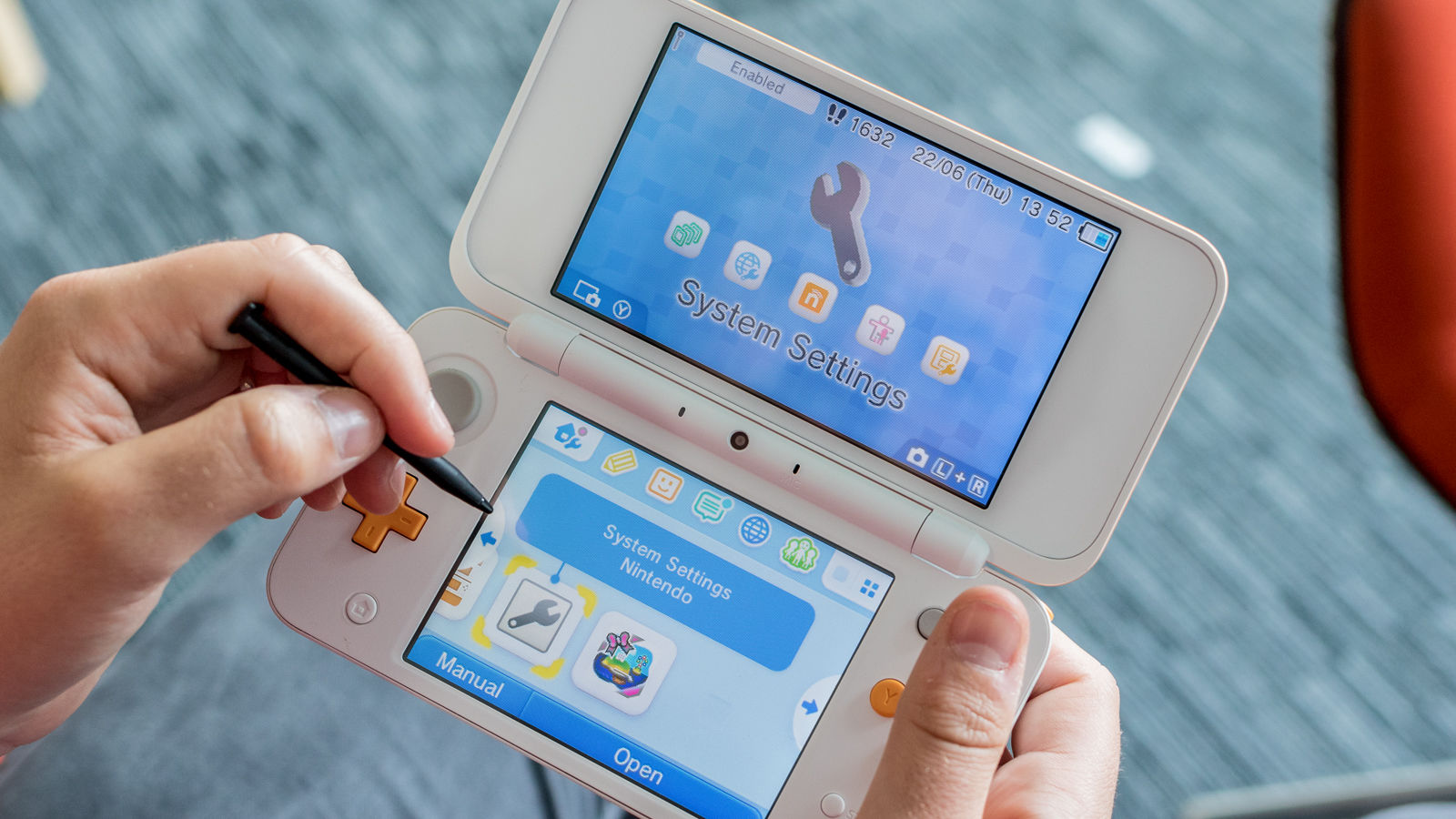 In terms of buttons, the 2DS XL gets the full set of features from the 3DS model, including the C Stick and additional shoulder buttons (ZL/ZR).

The built-in speakers have also been moved – they’re now on the front edge, where you’ll also find the power button, LEDs, headphone jack, and stylus slot.

That does contain our only real gripe with the design though: the short, stubby stylus.

Compared to the longer stylus from some previous models, this is just too short for most adults to use comfortably during extended sessions, and it’s hard not to feel a telescoping stylus would have been a better choice for the shorter chassis. 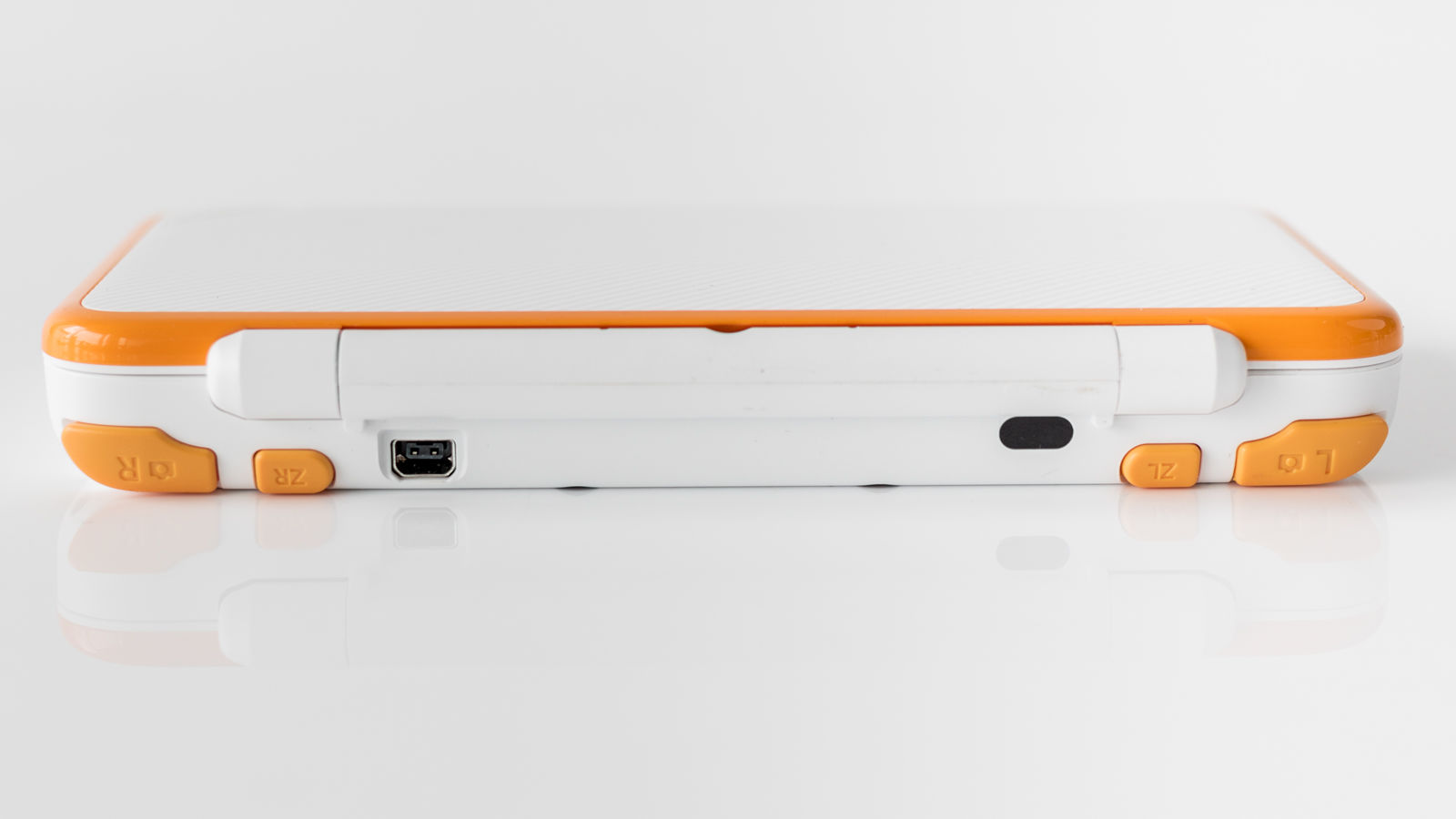 At launch, the 2DS XL is available in two colour combinations: Black + Turquoise and White + Orange. There’s a good possibility Nintendo will launch more editions at a later date though, so don’t worry if neither of them appeal to you.

Despite some initial scepticism about the colour, I’m actually a big fan of the white model I’ve been using. The glossy orange band around the lid stands out nicely, while the face buttons are just muted enough to not offend the eye.

Finally, it’s worth noting the slightly textured stripes across the lid. These aren’t just an aesthetic choice – they also make the case much more grippy, so the 2DS XL is ideal for younger gamers with slippy fingers – or the clumsy among us.

When it comes to the hardware and specs on offer here, in a nutshell Nintendo has given the 2DS all of the features from the New 3DS XL except the actual stereoscopic 3D.

The most obvious upgrade compared to the original 2DS is that you get larger screens (hence the ‘XL’). At 4.88in, the top display is significantly larger than the 3.53in display on the 2DS, and as mentioned, the smaller bezels make it look even better.

It’s not just the top screen that’s bigger, as the bottom touch screen also jumps from 3.02in to 4.18in. Both screens have almost double the area of the original 2DS, making this a really marked improvement. 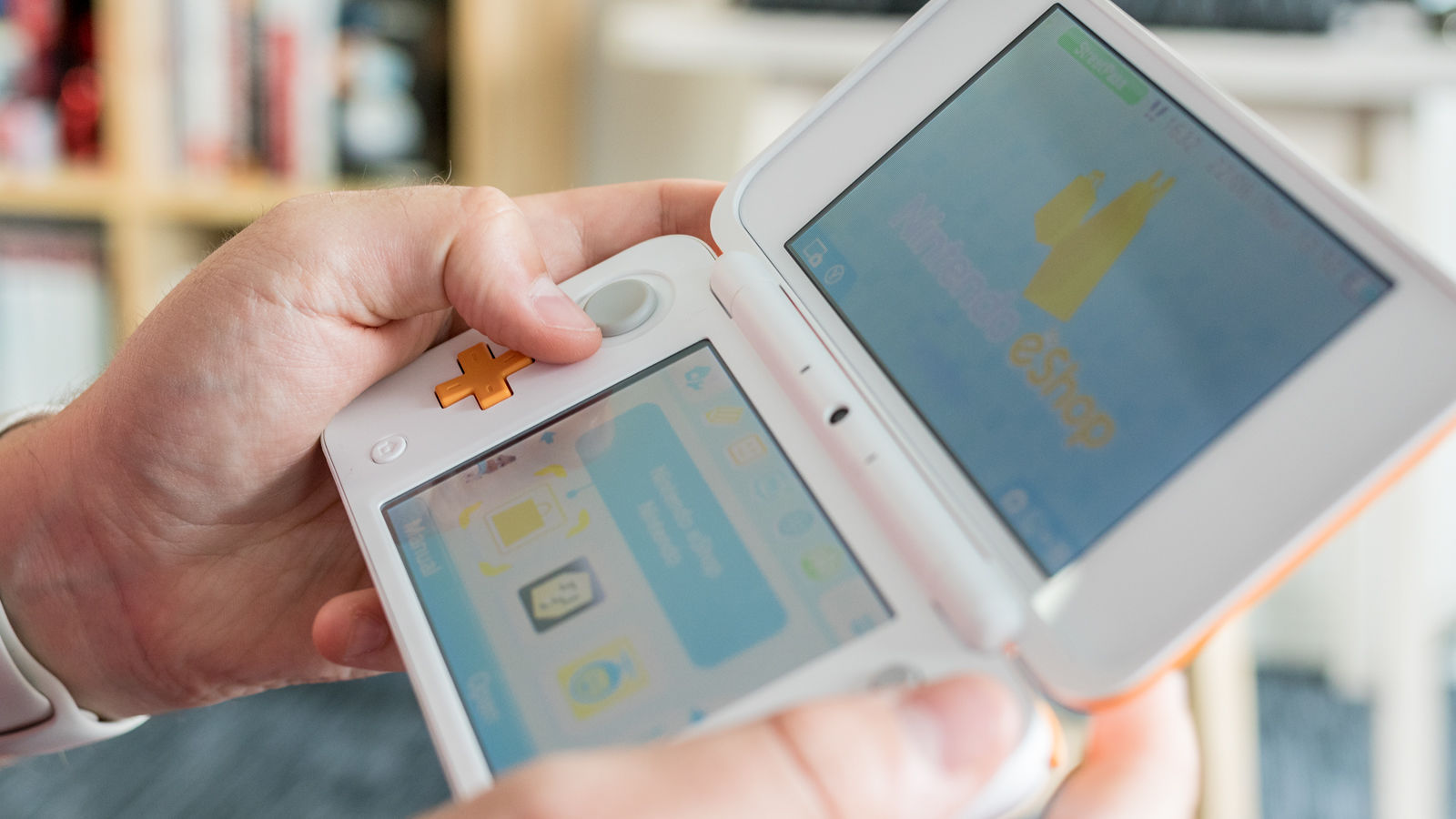 In terms of both dimensions and resolution, the new displays are the same as in the 3DS XL, but the crucial difference is that the 2DS XL doesn’t have the stereoscopic 3D.

We don’t know about you but the general consensus here is that we’re not too fussed about 3D anyway, and some major recent games like Pokémon Sun and Moon don’t offer the stereoscopic effect anyway.

It’s also worth clarifying that the 2DS XL can still play as the same games as the 3DS XL, so you don’t lose access to any content – you just can’t enjoy the 3D visuals.

Another key upgrade is that the 2DS XL comes with NFC technology embedded into the bottom screen so you can use Amiibo with the console. 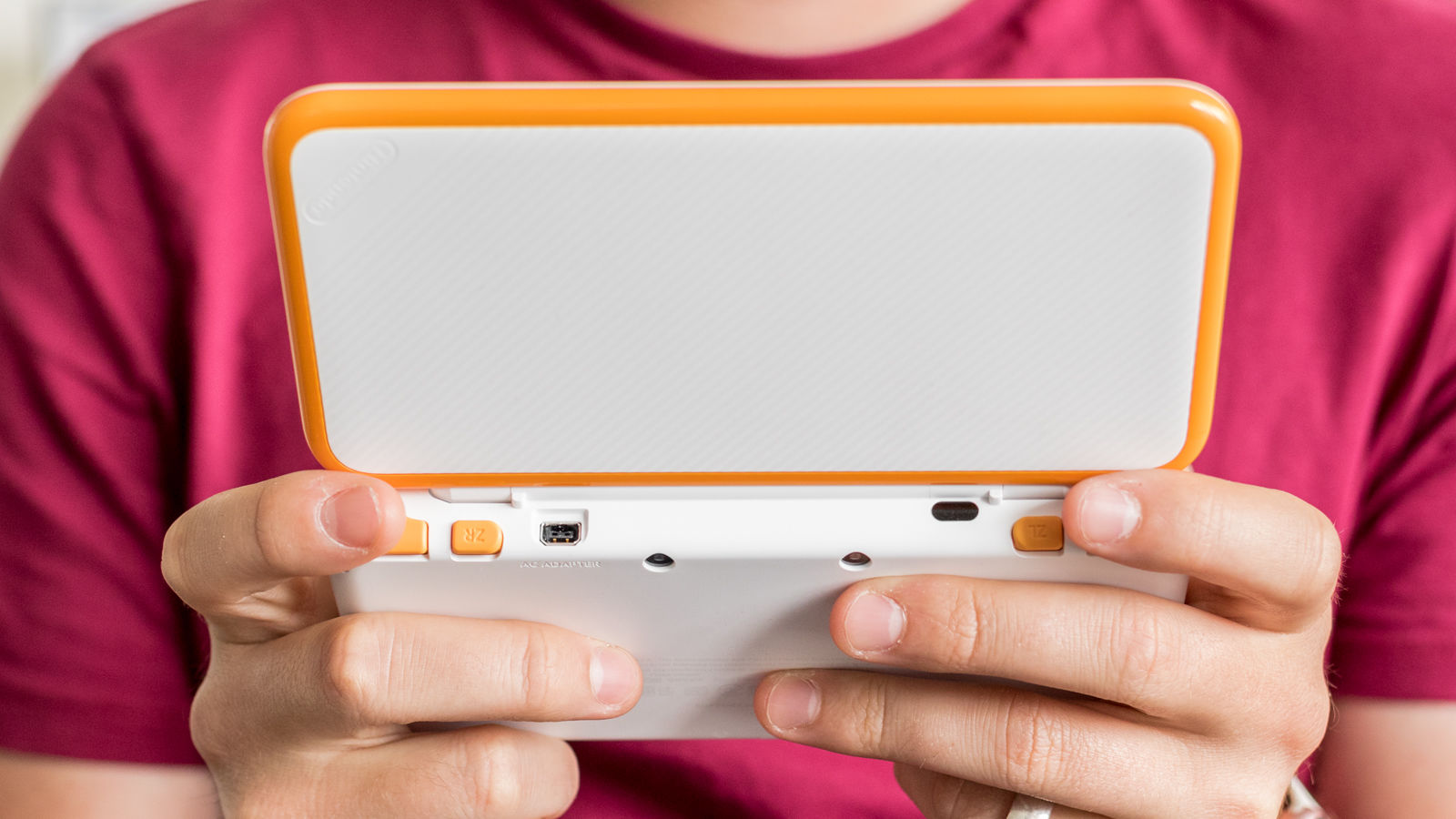 There are other hardware upgrades from the original 2DS too. The XL model has 256MB of RAM (double the amount) and a better processor. It’s got the same 804MHz quad-core and 134MHz single-core chipset, with 268MHz of graphics processing, as found in the 3DS XL.

You’ll see things like better load times and the ability to play titles that might otherwise be exclusive to the New 3DS.

Nintendo quotes a battery life of between 3.5 and 6.5 hours, which varies depending on things like screen brightness, use of touch screen, software, and wireless usage.

We’ve consistently managed about 4 hours gameplay on a single charge with Resident Evil: Revelations – a relatively graphically intense title – with wireless on and screen brightness set to max.

You might be wondering why Nintendo has launched a new DS handheld console only a few months after the release of the Switch, which is itself a very capable portable.

Although we’re hugely impressed with the way you can take the Switch around with you, it’s a lot bigger and doesn’t offer a very long battery life for playing on the move, meaning the 2DS XL is still better suited to portable play – though that could change if rumours of a Switch Mini turn out to be true. 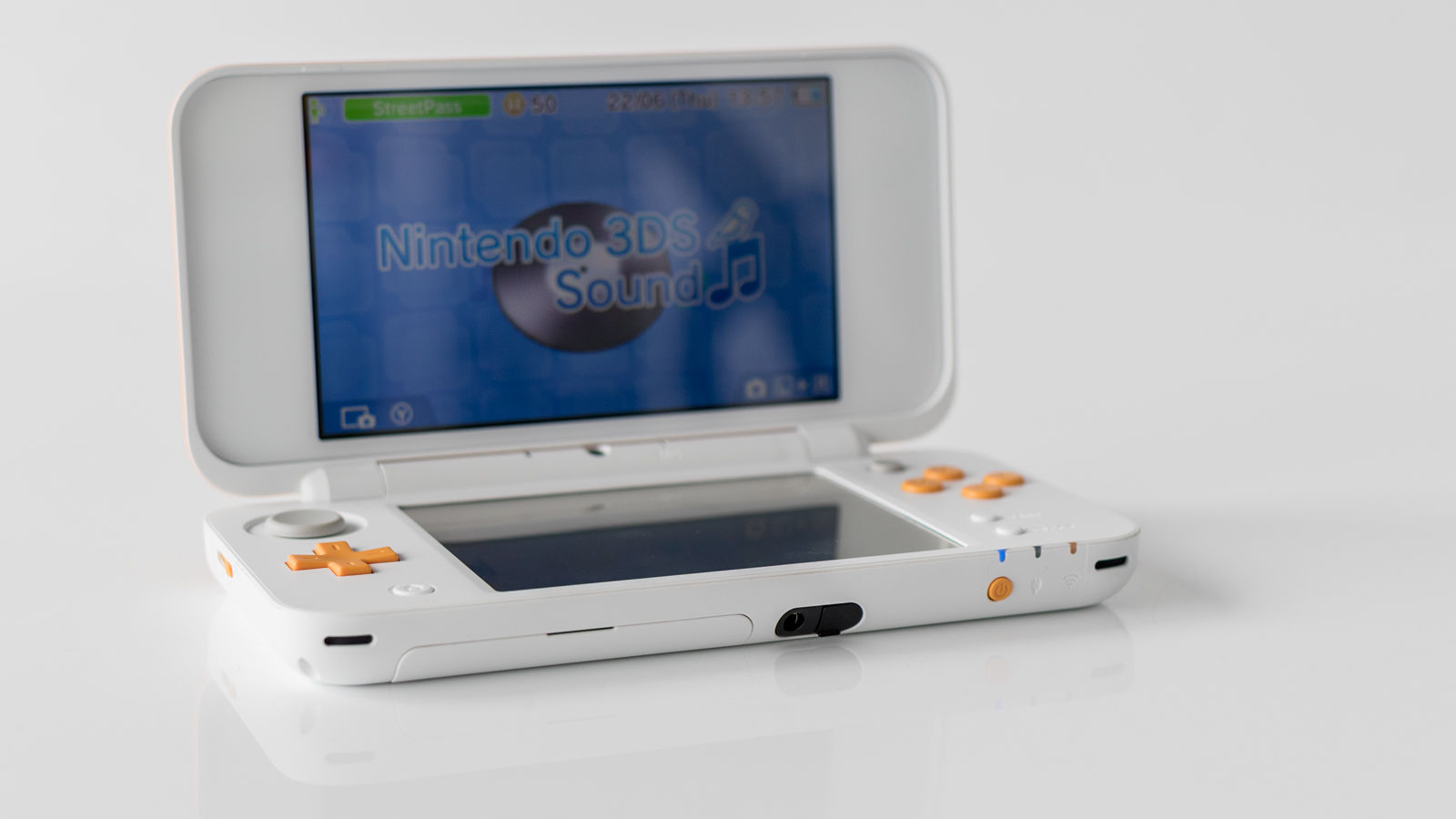 It’s the games that are the big difference, though. For Nintendo, these are two very different platforms, and have entirely different game libraries available to them – not least to take advantage of the dual-screen setup here.

The 2DS XL has the major benefit of access to the whole DS game library, and can play everything released on the DS, 3DS, New 3DS, or 2DS. At the time of writing, that’s six years of games from the 3DS family alone, and 13 if you go way back to the original DS release.

Nintendo shows no signs of slowing, either. There are plenty of new games on the way in summer 2017 alone, including Ever Oasis, Hey! Pikmin, Dr Kawashima’s Devilish Brain Training: Can you stay focused?, and Miitopia.

At E3 2017 Nintendo announced even more games on the horizon for the platform, including the likes of  Pokémon Ultra Sun and Ultra Moon and Metroid: Samus Returns.