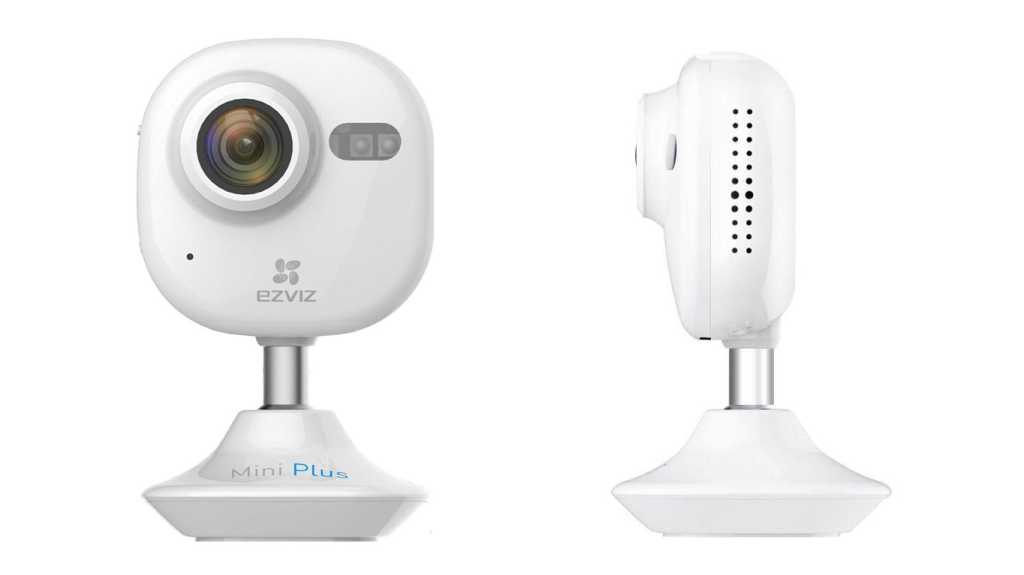 The Mini Plus is a great home security camera that works reliably and offers very good quality video. We’d like to see some improvements in the app both in terms of the interface and also to add some of the advanced options that you get only in the Windows app. It’s a shame there’s no free cloud recording option, but the fact it can record to both cloud and microSD means you have the choice. Ultimately, you’ll struggle to find another 1080p security camera with a similar set of features and diminutive size for less.

The choice of home security cameras is huge these days and while the big brands might be where you look first, there are some compelling alternatives.

If you’re after an indoor camera, the Mini Plus is the latest from Ezviz. This is a new brand (in the UK at least) from well-known CCTV manufacturer Hikvision.

The Mini Plus is a full-HD camera that can record to an internal microSD card and / or the cloud. It supports two-way audio, night vision and – amazingly – costs less than £100.

Ezviz Mini Plus: Price and availability

This makes it one of the cheapest smart home security camera we’ve reviewed, but do check out our list of the best cameras for home security for alternatives. EZVIZ’s own Mini 360 is well worth a look as it’s the same price, but lets you rotate the camera remotely – pan and tilt – so can be a better choice if you want to look all around a room, or perhaps both inside of a room and out through a window with a single camera.

If you just want to record to a microSD card, then buy one for the Mini Plus and that’s all you’ll pay.

If you want cloud recording, the option is available. It costs £4.99 per month for rolling seven-day storage and £9.99 for 30 days.

Ezviz Mini Plus: Features and Design

Much like the Y-Cam Evo, the Mini Plus is surprisingly small. It’s actually slightly smaller than the Evo, although it won’t make any practical difference. Both are white and should blend relatively easily into a light-coloured background.

But its conspicuousness will depend upon where you decide to mount it. Again, like the Evo you can place it on a shelf or a flat surface. Thanks to a magnetic base, you can mount it on anything made from steel.

And if there’s nothing suitable, there’s a steel plate in the box with wall plugs and screws. A decently long micro USB cable is included, and it plugs into a standard USB port on the wall charger.

This is useful, since you can easily buy and install a USB extension cable if it’s not long enough.

Setup is very easy. You first download the Ezviz app for iOS or Android. You then create an account (using just an email address and password).

Then you power on the camera and use the app to scan the QR code on its rear. As the camera is in setup mode, it asks if you want to use the Wi-Fi network to which your phone is connected and assuming this is correct, you need only enter the password for the network and this is then ‘pushed’ to the camera via Bluetooth.

After a minute or so, the app shows the video feed from the camera and you can begin to set the options you want.

One of your first tasks will be to install a microSD card. Up to 128GB cards are supported. It has to be formatted before it can be used for recording, so make sure you don’t need any data that’s already on it. 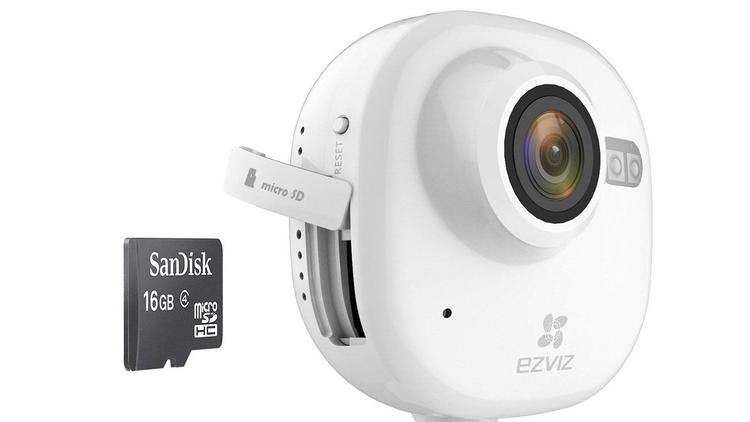 The app is relatively easy to learn and it’s intuitively laid out.

You see a thumbnail of the camera (or multiple cameras if you have several) and you can tap on the one you want to view the live feed. To see the video full screen, just rotate your phone to landscape.

In portrait video, you have controls below the video rather than to the side. These are (from left to right) to stop and start the live playback, to mute the camera’s microphone, to see a grid view of the cameras, to flip the video’s orientation (for ceiling mounting, say) and to zoom in on the video.

You can also zoom in by pinching two fingers apart, just as you would on a photo. 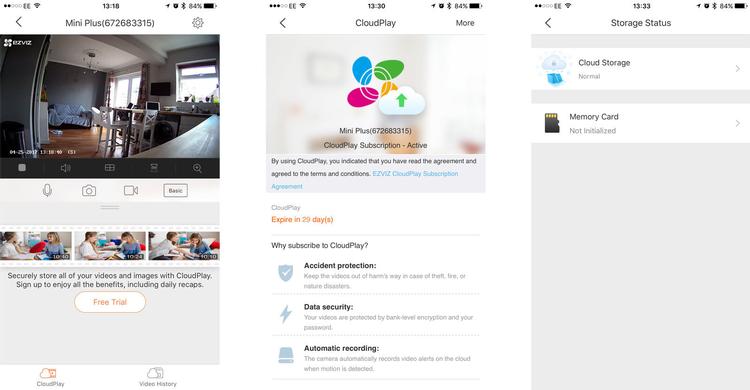 Below these controls are buttons for starting two-way audio, taking a snapshot and recording video on demand. On the far right is a shortcut for quickly changing the resolution between ‘Basic’, ‘Standard’ and ‘Hi-Def’.

This changes only the stream you see when viewing, not what is recorded. There are two streams and the main 1080p stream is recorded (at 15fps by default) to the microSD card. For video uploaded to the cloud, resolution is reduced to 720p to avoid using up a lot of your internet bandwidth. Both are recorded simultaneously.

One gripe is the lack of a shortcut to put the camera in sleep mode. The option is buried at the bottom of the settings screen. On other Ezviz cameras there’s a ‘Privacy mode’ shortcut, so hopefully this will be added to the app for this model soon. 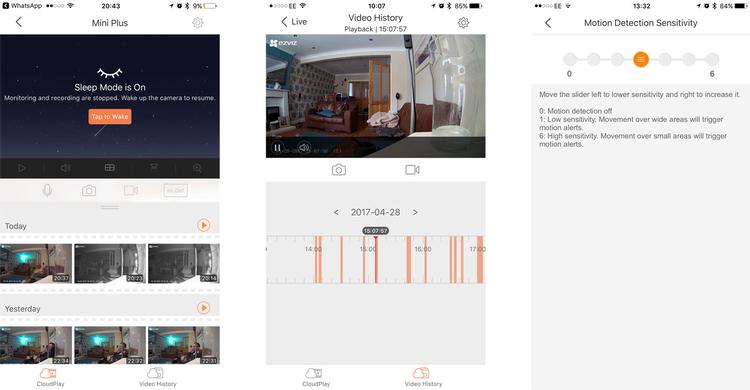 Unlike some cameras – such as the Nest Cam – the Mini Plus records only when motion is detected. The only control you have over this in the app is sensitivity, and there’s a sliding scale (above, right) with six positions. The seventh is ‘off’ but selecting this would mean the camera records nothing at all and can merely be used for live viewing.

If you want to set any specific zones to watch (or exclude) for motion, then you’ll need to download the Ezviz Studio app for Windows (below). 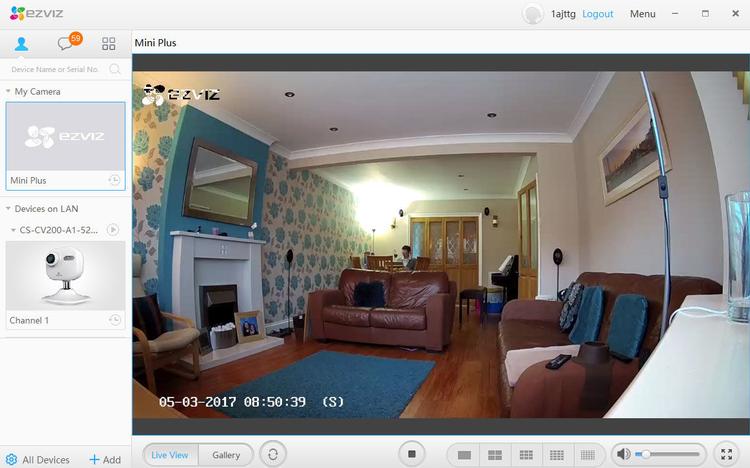 This gives you a crazy number of extra options and controls over the finer details of the camera’s image quality and recording options. You can, for example, choose to push up the frame rate to 22fps in 1080p, tweak the white balance or change the amount of time the camera pre-records when it detects motion. 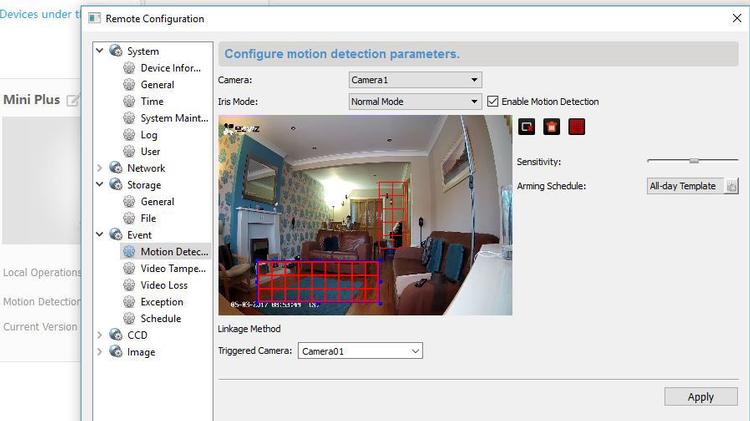 We’re assured that the mobile app will be updated later this year to include some of these options (hopefully motion detection zones) along with ‘Smart detection’. Currently, any motion will trigger a recording so you could end up with lots of clips where nothing interesting or important is happening.

But with the forthcoming smart algorithm, it will be able to detect humans and ignore everything else. The team is working on adding face recognition so you can be notified when someone specific enters the room, say.

Tap on Video History at the bottom of the app and you can see a timeline of recently recorded clips for each day. The default view is CloudPlay, which also provides a daily recap which involves a slide show from the various clips recorded that day. A slider bar lets you adjust how long each image is shown for, and it’s a reasonably nice way of reviewing the day’s events. 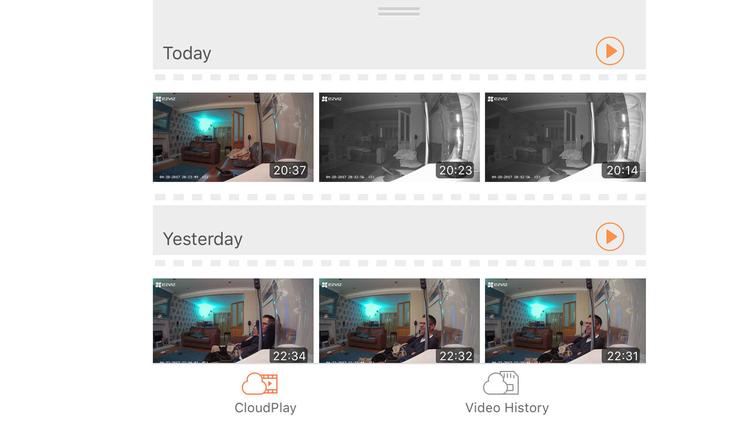 If you tap on Video History at the bottom right (a slightly confusing name which might be better called microSD storage) you get a scrollable timeline for quickly jumping to a particular day and time.

Any strips of red show that video has been recorded and you can drag the timeline to any red section and video will start playing. 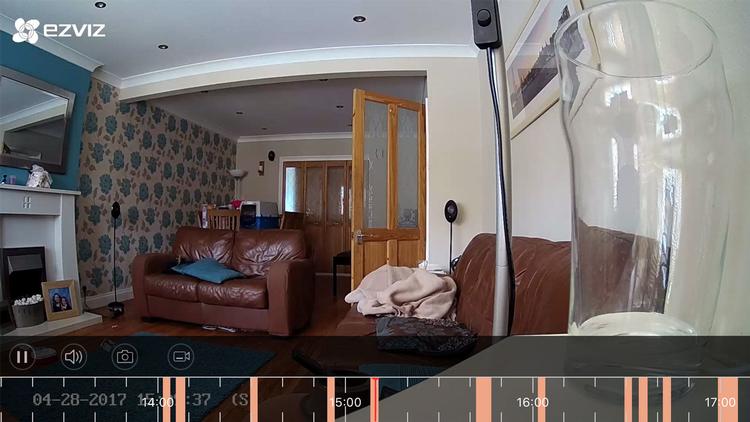 The date selection could do with being a little more polished, and it isn’t in UK format. A series of buttons, such as ‘Yesterday’, ‘Sunday’, ‘Saturday’ and a calendar view would be better.

A nice touch, though, is that you see loading progress as a percentage while you wait for clips to load.

While you’re watching, you can use the buttons to take a snapshot or even record a video. The latter sort of makes sense if you want to capture the moment something happens and share the photo, but recording a video of a video that’s already recorded is a bit odd.

If you use CloudPlay and a microSD card, it’s not clear whether you’re watching from the cloud or the card.

But for videos in the cloud, you can download them to My Album in the app, then save them to your phone’s camera roll.

Ezviz has clearly thought about alerts. There’s a general ‘Alarm notification’ setting which will give you alerts from the app whenever motion is detected.

That’s not ideal, so you can additionally set a notification schedule for each day of the week. However, this is simply between two times (such as 7.13am to 10.45pm), so you can’t set more than one period.

There’s another type of notification where you can the camera to make a sound when motion is detected. It’s the first camera we’ve seen to do this which isn’t sold as an ‘all encompassing security system’.

One option is a simple beep, and the other a loud siren-type alarm. But since you can’t apply this on a schedule (where you’d activate it only when everyone is out) it very quickly becomes annoying and you’ll turn it off.

Separately, Ezviz sells a smart alarm system. This works well with the camera and you can set it to send you a snapshot and an alert if the alarm is triggered.

Plus, thanks to IFTTT integration, you can also do plenty of other things.

The two-way audio feature works well enough, but the volume is too low and there’s no way to adjust it. We’re told this is being sorted in a firmware update.

When you get a motion notification from the app, you can tap it to launch the app and you’ll see a thumbnail image. Tap the Playback button to watch the recording.

We found playback on a mobile device was choppy if the video had only just been recorded, but much smoother a few minutes later.

Cleverly, the time and date stamp is always visible because an algorithm works out whether the characters should be black or white based on the colour in the video behind it.

Overall quality is very good, and especially impressive considering the price. Colours and detail levels are good, and the 135-degree lens means you see a lot of a room.

At night, the infrared LEDs mean the image is black and white, but the quality is as good as we’ve seen from even cameras costing nearly twice as much.