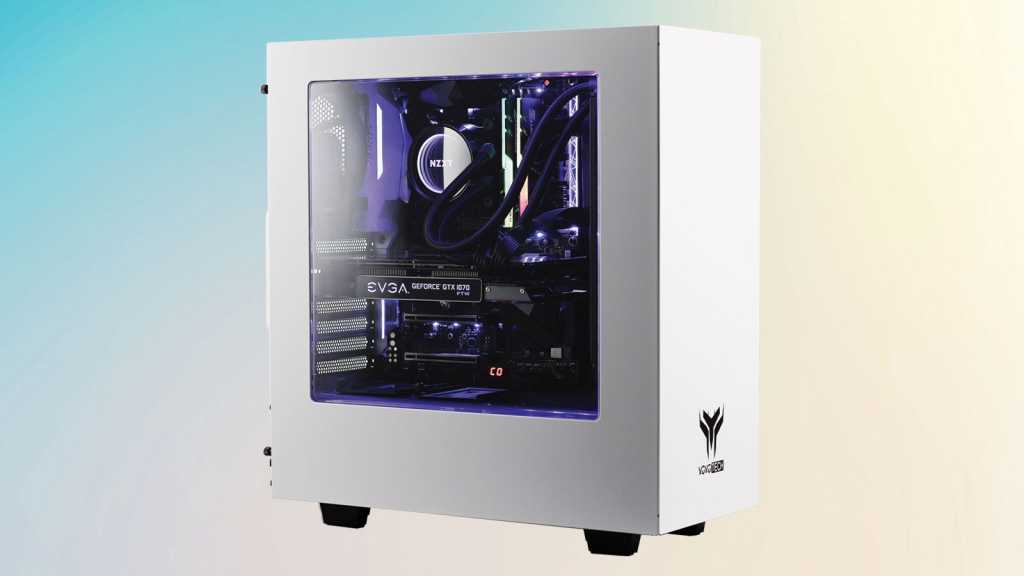 If you love bright, pulsing lights with customisable colours, then the YoyoTech BlackBox SP has got your name written all over it. If you love high-performance gaming, you’ll also enjoy the overclocked Intel CPU, Nvidia graphics and NVMe storage which combine to deliver superb performance for your money.

Perhaps the most ironically named PC we’ve ever reviewed, the BlackBox SPfrom YoyoTech is sure to stand out, both in performance and in looks.

Finished in dazzling white with bright metallic purple accents, YoyoTech’s Intel-based gaming PC certainly looks spectacular, but under that rather daring paint job we find a selection of well-chosen components pushed to the limit in the pursuit of the highest possible gaming performance.

You can buy the BlackBox SP from Yoyotech’s website for £1649, which also includes delivery. You can also make several adjustments to the review specs by hitting the ‘customise’ button before purchase.

You should also check out our list of the best gaming PCs as well.

Whether your initial response to the appearance of the BlackBox SP is one of delight or horror, you can’t dispute the elegance and space efficiency of the NZXT S340 compact mid-tower case – which is also available in a selection of other colours, including black – how boring!

The NZXT doesn’t pander to the needs of legacy component like optical drives, for which no space at all has been made available.

Instead, the entire front of the PC is a blank, minimalist panel of white, directly behind which sits the massive Kraken X52 High-performance 240mm liquid cooler which adds yet more razzle-dazzle to the PC’s already rave-like appearance with its own customisable RGB lighting effects.

And the party doesn’t stop there: the supplied Gigabyte Aorus Z270X Gaming 7 motherboard also comes with a built-in multi-zone LED light show and even the twin DDR4 3200MHz RAM modules self-illuminate like a pair of colour-changing glow sticks.

This gaming-centric motherboard offer massive upgrade potential with support for up to three-way graphics card options and triple NVMe PCIE SSDs in RAID 0 if you really want to push performance to the extreme.

Of course, you also get comprehensive automatic and manual overclocking with smart fan controls built in. Enhanced “Killer” network performance and Creative Sound Core3D enhancements are also built in, along with plenty of USB 3.1 Gen2 connectors and a Thunderbird port for high speed connectivity.

The YoyoTech BlackBox SP is most certainly a PC that’s screaming out for attention although, thankfully, all of these multicoloured lighting systems come with software controls so you can easily turn them all off when no-one is looking and you really need to concentrate on your tax return.

You’ll be pleased to know that the BlackBox SP also has the performance to back up all of this multicoloured customisation. YoyoTech has chosen a 3.8GHz Intel Core i5-7600K quad-core processor which has been overclocked to 4.6GHz.

This approach CPU sacrifices the Hyper Threading of the more expensive Core i7-7700K, which doesn’t give you useful performance gains for gaming, but gives you some extra MHz for free which saves you money that can be more usefully spent elsewhere in the system.

Another great component choice here is the graphics card. YoyoTech has selected an Nvidia GeForce GTX 1070 for this system.

Of course it’s not just any GTX 1070: in keeping with the overclocked theme of the BlackBox SP, the PC comes with an EVGA GeForce GTX 1070 FTW Gaming card which has been re-engineered from Nvidia’s original spec to allow increased base and boost clock speeds up from 1506/1683 MHz to 1607/1797 MHz out of the box.

It also comes with optional automatic overclock tuning and the enhanced cooling power capacity to allow it. And it lights up in user-configurable RGB colours, so it’s perfect for this PC.

Some non-illuminated components are also installed, including a 250GB Samsung 869 Evo NVMe SSD, plugged directly into the motherboard and a separate 2TB magnetic drive tucked away into its own compartment, while a 750W EVGA Gold 80Plus PSU supplies ample power for the system.

Overclocked PCs generally give very good performance for the money, and the Yoyotech BlackBox SP is no exception.

You can expect to crank the quality settings right up at resolutions up to 2560×1440 without dipping below 60 fps on many titles, and similar performance can be achieved at 4K with reduced quality settings although the the highest resolutions are a little more challenging for this GTX 1070 than a stock GTX 1080, despite its overclocked performance tweaks. It’ll also breeze through VR titles, if that’s your bag.

Outside of gaming, the YoyoTech BlackBox SP continues to perform well, convincingly outpacing Ryzen 7-based systems and coming in just a little behind the more expensive Core i7-7700K for most tasks.

A Core i7 will pull ahead in intensively multitasking scenarios like the Cinebench R15 multiple CPU test, but this is of no real advantage to gamers who will be served very well by the BlackBox SP’s overclocked Core i5.

Even at this price, you get Yoyotech’s basic ‘Silver’ warranty. This includes parts and labour only for the first year and requires you to ship the PC back to Yototech for repair at your expense. If there’s a fault in the first month, though, Yoyotech will collect, fix and return the PC. And chances are, if it’s fine after a month it will probably be fine for three years.

You can upgrade to the Gold warranty for £39.99 which gives you parts cover for all three years, and upgrades the first year to collect and return shipping.

For £69.99, the Platinum option is the same, but gives you collect and return shipping for the whole three years.