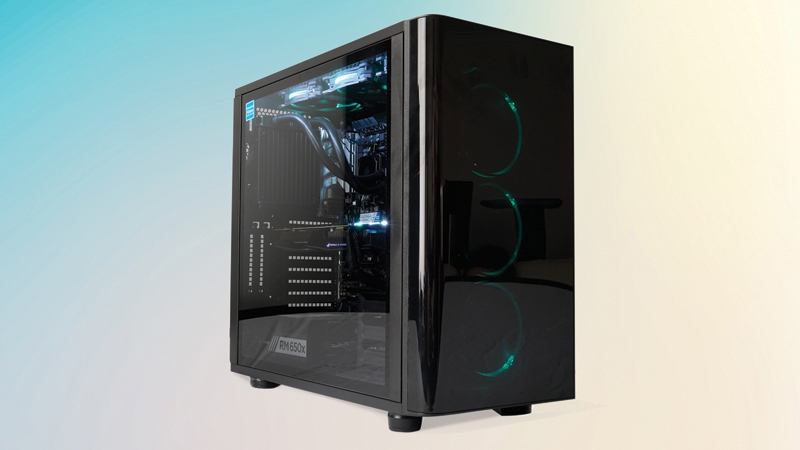 The Mesh Ryzen 7 Gaming PC-A is beautifully built, but ultimately flawed in its configuration. Let down by a slow SSD and a non-overclocked graphics card, yet coming with an unnecessarily expensive operating system, we feel this PC could do much better with a couple of minor tweaks to the spec.

You can buy the Mesh Ryzen 7 GAMING PC-A direct from Mesh online. When the page opens, you can click “add to cart” to buy our review configuration or “customise” to change the spec to suit your own needs – and to be quite honest, we suggest that you do.

This is an imposing beast of a PC even before you turn on the power thanks to tempered glass side panels which give a clear view of the components inside. These include the latest AMD Ryzen 7 1700X eight-core processor and a powerful Nvidia GTX 1070 graphics card.

The Thermaltake View 31 tempered glass RGB Edition Mid Tower chassis into which the system is built is a heavy, expensive-looking case that sits wider than the typical mid-tower PC and is fitted with glass side panels which let you see every single internal component from both sides. It also contains a trio of 140mm fans at the front which can be set to any of 256 available colours which glow through meshed front of the case. Another set of these same illuminated fans is also fitted to the top of the case.

Taking full advantage of the glass panels, Mesh has ensured that most of the rest of internal parts also support RGB illumination: firing up the PC for the first time results in the kind of sensory overload you’d get from turning on a set of christmas lights without taking them out of the box. LEDs hit you from all directions, gradually transitioning through a rainbow of gaudy colours, giving the PC a second function as a sort of high-tech lava lamp replacement.

Thankfully, whether these effects appear garish and jarring or rather more subtly engaging is entirely up to you, as the whole lot can be customised to your own preferences under software control. Keep the glass clean of fingerprints and the system really can look rather impressive.

On a more practical level, the case’s modular design allows for a variety of internal configurations and comes with removable dust filters which are especially important when the PC’s internals are constantly on show. See all gaming PC reviews

The Ryzen 7 1700X processor sits in the middle of AMD’s Ryzen 7 range and features 8 cores and 16 threads at 3.4GHz, boosting to a maximum 3.8 GHz for an individual core. The processor is topped with a tidy-looking Corsair H60 Hydro Series liquid cooler and the whole PC is powered by a 650W Corsair RM650x PSU.

An Asus AMD AM4 Ryzen PRIME X370 Pro motherboard forms the basis for this PC build. This is an advanced motherboard with support for both Nvidia SLI and AMD CrossFireX dual-graphics configurations, enhanced audio hardware, 10Gb/sec USB 3.1 support and a slew of overclocking and fan control options. Also key to this particular system is its support of Aura sync RGB lighting which can co-ordinate the various illuminated components in the system and place them under the control of a single software application offering preset effects modes and user customisation.

The motherboard’s M.2 slot is filled with a 250GB WD Blue SSD, and this is unfortunately a rather disappointing feature in what is an otherwise impressive gaming PC. Using an M.2 SSD is a great idea as it requires no cables and only a tiny amount of space, but a drive based on out-dated SATA technology rather than a much faster NVMe model is, we feel, rather less than a PC at this price point would deserve.

A Samsung 950 Evo NVMe drive would cost around £50 more, but deliver far greater performance. While the cost saving may be worth it to some users, it seems a strange one to make as Mesh has elected to install Windows 10 Pro rather than the Home edition, wiping out any cost saving made on the SSD and delivering no real benefit to most gamers. The PC is also supplied with a separate 1TB hard drive, where many other systems at this price might give you 2TB.

Of course, the GTX 1070 graphics card selected for this system is an Asus STRIX ROG model, with matching RGB lighting support, although it’s not the factory overclocked version.

As with all Ryzen 7-based PCs the Mesh Ryzen 7 Gaming PC-A comes into its own when performing many tasks simultaneously or exploiting the kind of parallel processing algorithms found in workstation-class software such as Cinebench R15. Unfortunately, this doesn’t translate into the best gaming performance results, although the system is certainly quite competent, you could certainly achieve better frame rates at this price, especially if you’re willing to sacrifice some of the, admittedly impressive, cosmetic enhancements offered by this PC.

There’s also the reduced storage performance you get from the SATA SSD which is reflected in the system’s rather low PCMark 8 Storage score and also has a detrimental effect on the other PCMark scores too. While this has no bearing on those all-important gaming frame rates, it will increase loading times on larger titles.

The included GTX 1070 graphics card is a good choice, offering solid performance results at high resolutions and quality settings. But, because the card isn’t factory overclocked, it’s not achieving the very best results we’ve seen from other GTX 1070s. It does however come with software tools to overclock it yourself, which should enable you to eke out some extra frames per second when you need them.

Overall then, performance is good, but it could be better. If you like this PC we’d suggest you consider customising the build slightly to speed it up a bit, especially if you don’t need Windows 10 Pro.

Mesh offers a lifetime warranty on labour, but parts are only covered for the first two years. For the first year only, a full collect and return service is provided. Much better warranty terms are available elsewhere.