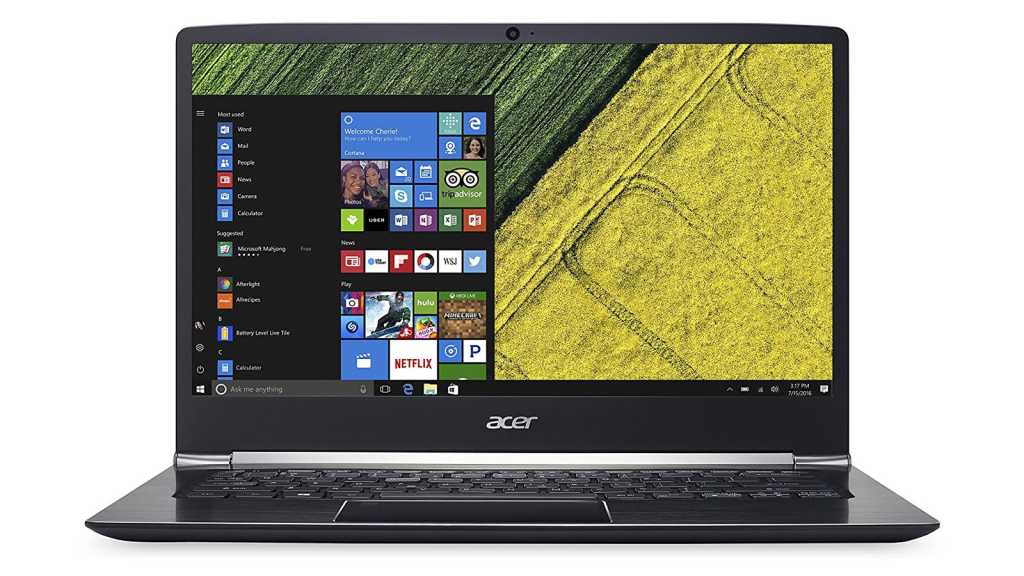 The Acer Switch 5 is a great all-rounder laptop for those who want high-end flavour without a price that’ll make you wince. While this isn’t the best-looking premium laptop around, the Switch 5 is also cheaper than just about all of them, by several hundred pounds in some cases. If you don’t hate the look and don’t mind a plastic trackpad, there’s little reason to delay. The screen is very good for the price, build quality is solid, performance is comparable to much more expensive laptops and there are even some advanced extras like a narrow screen surround. Acer has pulled out another great laptop deal.

The Acer Swift 5 is the sort of laptop to make you think twice about buying a MacBook. It’s slim, light, powerful, and still cost hundreds of pounds less than the comparable Apple model. And even the comparable Dell XPS.

Acer and Asus are masters at this game. There are Asus ZenBooks with slightly more expensive-looking designs (from the outside at least) than the Swift 5, and if you really want to spend as little as possible, we’d suggest looking at the Swift 3 too. It’s great.

However, these comparisons don’t take away from the Acer Swift 5’s brilliance. It’s versatile, very light, its screen is excellent for the price and it is great value.

There are two versions of Acer Swift 5. The model we were sent for review is the lower-end of the two, the model most likely to appeal to those who want an expensive-looking, light laptop that will still leave plenty of change from £1000.

As well as easily beating Dell on price, Acer also appears to beat arch-rival Asus. Its closest alternative, the ZenBook UX330, costs £849 for roughly the same innards as the £749 Swift 5.

Unlike most laptops, the Swift 5 comes with a 2-year warranty rather than just the one year, but it’s a “carry-in” warranty. This means you’ll have to hunt down a service centre, requiring a bit more effort than a collect-and-return or onsite warranty.

When we reviewed the Acer Swift 3, we were surprised to see an all-aluminium laptop at such a low price. Despite being more expensive, the Swift 5 actually gets rid of some of the metal, presumably in order to get thinner and lighter.

The underside is high-friction soft-touch plastic. It’s great at keeping the laptop in place should you use the Swift 5 on your knees, but means this isn’t an “all-metal” computer. Initially we thought the ridged lid was plastic too, but it is coated metal. Making metal look and feel a bit like plastic is a strange move, but it wouldn’t be the first such move Acer has made.

It’s one of those rare laptops that seems to want to impress you rather than the people in Starbucks looking at you tapping away as you sip a latte. Acer makes some of the quirkiest design choices in laptop land, and while the unusual lid texture is another example, it’s likely to split the audience rather than turn everyone off.

The benefits in cost and design are worth it anyway. At 1.3kg, the Swift 5 is very light for a somewhat affordable laptop, for example. And the 14.6mm thickness gives you virtually the same practical benefits as the thinnest laptops in the world.

While Acer hasn’t truly capitalised on the still-fancy materials used to make the Swift 5, its build is actually very good once you start prodding the thing. The screen doesn’t flex too much, and there’s virtually zero flex to the keyboard, which is more than we can say for some of Asus’s most recent laptops.

Any shortcomings here are really about the look. We’d suggest you do you best to look beyond them, given how great this laptop is to actually use.

A true crowd-pleaser, the Swift 5 does not lop off all traditional connections like some of the most recent, most expensive laptops. Instead, there’s a bit of everything.

You get two full-size USB 3.0 ports for all your normal accessories and peripherals, plus a USB-C 3.1 port for any newer gear that shifts to this standard.

Just as important, there’s a full-size SD slot and an HDMI, letting you connect to a TV or monitor. If you don’t want to have to buy any extra adapters or cables, this is the sort of connector arsenal you need. These connectors alone may be worth the extra 4mm thickness, compared to the latest 10mm-thick crowd.

There’s another extra too, a fingerprint scanner on the trackpad. These are starting to appear on a lot of new laptops, taking the lead set by phones in giving you a way to log in without using a password or pin.

It uses one of Windows 10’s built-in features, Hello. This is what lets you login using a finger scanner or camera-driven face recognition.

Like most we’ve tried recently, the Acer Swift 5’s scanner isn’t 100 percent reliable and sometimes takes a couple of attempts to work. However, it seems less of an issue when we’re clearly not paying masses of extra money for the feature.

Saying that, we’d be happy to sacrifice it for a textured glass touchpad.

The Swift 5’s is plastic, and therefore isn’t immune to a bit of finger friction squeak as you move around. It’s one of those things you’ll notice after you’ve been treated to a glass trackpad before, and is perhaps the first thing we’d change about the Swift 5, but this is otherwise a perfectly good pad. We are also being pretty picky as it’s a very good impression of textured glass.

Its clicker feels good, the size is fine and we didn’t have any problems with misbehaving gestures or swipes.

The Swift 5 keyboard is good too. Like most thin laptops its action is reasonably shallow, but nothing like the ultra-compressed keyboards of the latest MacBooks. There’s enough give to make long-form typing comfortable, and the keys feel high-quality.

After the minor disappointment of the plastic trackpad, we’re also glad to see there’s a keyboard backlight. This makes typing in the dark much easier.

One of the highlights of the Swift 5 is something you might not notice at first glance. It has a very slender screen surround, letting Acer cram a 14in display into a frame not much bigger than that of a 13in laptop.

It’s a slightly less extreme, but very welcome, take on what Dell does with its Infinity Edge XPS displays. It marks this out as a truly modern machine, which is impressive when the price is still a key draw.

The tech behind the screen is more conventional, using an IPS panel with a glossy top layer and no touchscreen, but image quality is great for the price. It can stand up fairly well next to laptops up to £1300, including the HP Spectre 13.

Its strongest suit is contrast. At 1045:1, it’s one of the better results you’ll see from an IPS LCD screen, making its images look punchy and bold, and maximising the impact of the panel’s colour chops.

The Acer Swift 5’s screen doesn’t have an ultra-wide colour gamut, and doesn’t max out the sRGB colour standard so is technically undersaturated, but in person the results look good. It hits 81.2% of sRGB, 58.2 percent of Adobe RGB and 61 percent of DCI P3: not a Hollywood colourist’s dream machine. But to less expert eyes the contrast makes up some of the difference in terms of pure perceptual impact.

Maximum brightness is great too at 351cd/m2, so while the glossy display finish isn’t perfect for working outdoors, the backlight is powerful enough to compete with the sun

This is a very nice screen, and it has one last neat extra too. The hinge folds back fairly far, to around 140 degrees. It won’t fold flat, but does make it easier to angle the screen if end up working with the Swift 5 on your knees.

One of the amusing traits of the Acer Swift 5 is that it’s actually faster than the more expensive Swift 7, because it uses standard Intel Core  U series laptop CPUs rather than the ultra-low-voltage type so highly efficient it doesn’t need a cooling fan.

As a result, the Swift 5’s i5 and i7 versions are roughly as powerful as any laptop using these processors, including plenty of models over £1000. The ‘roughly’ bit comes into play with parts like the SSD, which is slower than some ultra-premium models. It reads at 550MB/s and writes at 390MB/s, where the fastest break 1300MB/s. Unless you’re juggling mammoth amounts of data regularly, you may not notice the difference.

The RAM is also DDR3 rather than 2133MHz DDR4, the top speed supported by the CPU.

Our review model has a Intel Core i5-7200U CPU, a dual-core chip with a 2.5GHz standard clock speed and 3.1GHz turbo boost.

It feels very responsive in general use, and can take on just about anything you like. It’ll breeze through the light Photoshopping, has the power for hobbyist video editing. In this basic performance respect, it’s comparable with 13in MacBook Pro, whose £1949 model isn’t dramatically more capable. And that uses an older processor.

You get a very good deal here. The Swift 3 scores 7424 points in Geekbench 4, and 2369 in PC Mark 8 Home, which is what we expect from a 7th Generation Core i5 laptop like this.

Don’t expect too much from its gaming abilities, though. The Swift 5 uses the Intel HD 620 GPU built into the Core i5 CPU, and while fine for older titles, it can only handle the indie games you might play on your PS4 or Xbox One, not the AAA titles.

We had to strip Alien: Isolation down to its barebones graphics settings and resolution to 720p to get a playable-ish average of 31.5fps. As you’d want to play the game, at 1080p with the effects ramped-up, the game runs at 13.6fps.

This limited gaming power is consistent among virtually all very slim and light laptops, although Apple’s MacBook Pro models are better because they have Iris graphics chips. Iris GPUs are still made by Intel, but are more powerful. You don’t see them too often in Windows machines.

The Acer Swift 3’s fan tends to start spinning even when you’re just doing light tasks. It’s certainly not silent like the Swift 7. The fan is also has small diameter, and it looks like there’s just the one, whose outlet sits on the bottom. A small diameter means relatively high-pitch fan noise, as with most ultra-slim laptops.

We didn’t find it too annoying, but it’s worth bearing in mind if fan noise gets on your nerves. The Dell XPS 13 is quieter.

It’s a minor issue day-to-day, and is more than made up for by the great battery life. Playing a 720p video on loop at 120cd/m brightness the Acer Swift 5 lasts for 10 hours 55 minutes. That’s reasonably close to Acer’s own claim of “up to 13 hours” of use.

This is an excellent result, and is a clear sign there’s some clever power management going on behind the scenes. Pure battery capacity is very good too, though. A 53.9Wh battery is much larger than that of the 38Wh HP Spectre 13, and closer to the 60Wh of the Dell XPS 13.

This is a laptop that can comfortably get you through a day’s work as long as you don’t have to max out the brightness or do anything too CPU-taxing.

Finishing on one of the Swift 5’s few so-so elements, let’s have a look at the speakers. There’s one on the underside of each end. Comparing to our regular slightly-ageing MacBook Pro, a ‘fairly decent’ sounding laptop benchmark, the Swift 5’s speakers are reasonably loud and give a wide sound image, but the treble is a little brittle, giving off a tinny vibe. The whole sound isn’t reedy and thin, but the treble has this thin character, the impression of audio quality is at best fair.