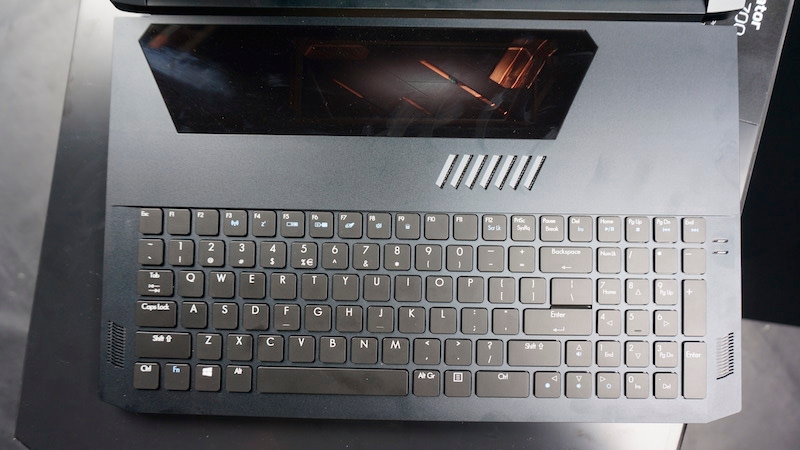 The Predator Triton 700 is a seriously impressive gaming laptop. However, while the window/trackpad might look cool and quirky it’s not ergonomic. Then there’s the fat price tag to contend with.

Gaming is one of the PC market sectors doing well. In fact, Acer says the growth is strong with an increase of 64 percent for its Predator range year-on-year. We were on hand at it’s ‘next at Acer’ event in New York to check out the new products.

A month on at Computex Acer has confirmed that the Triton 700 will ship with the Nvidia GeForce GTX 1080 GPU, though a cheaper model with the GTX 1060 will also be available. See also: Asus ROG Zephyrus review.

It might be cheaper than the 21X, but that’s not hard and the Triton 700 is still a laptop that requires a chunky piggy bank in order to afford it.

In design, the Triton 700 looks like a less bonkers version of the 21X with a similar dark grey aluminium chassis. It looks and feels great.

The most interesting thing about the design is the huge piece of Gorilla Glass above the keyboard – yes, above the keyboard. This, for starters, means you can see the internals of the laptop including the AeroBlade 3D fan and five heat pipes.

It looks pretty sweet, reminiscent of the windowed sides to gaming desktops. However, it’s not all for show as the glass can also be used as a touchpad – albeit a very hard one which will take getting used to as you can only tap it as it’s unclickable (no that’s not a real word).

While it’s been done before, it’s still quite bizarre – to look at and to use. It’s style over functionality here, for sure. You’re expected to use a mouse for gaming, of course, but there’s a bigger issue here than the trackpad.

Having the keyboard essentially flush to the front edge of the laptop means there’s no palm rest area. This means you’ll have to rest your hands on the desk next to the laptop which is not ideal in terms of ergonomics and comfort. Hopefully Acer will include a wrist rest with the laptop.

The keys are backlit and although the keyboard is mechanical it has an odd action due the short amount of travel. We like it, it will just take a bit of getting used to for those not used to it.

Acer is proud of the fact that the Triton 700 is just 18.9mm, similar to rivals like the Razer Blade and the MSI Stealth Pro, both of which are 18mm. It’s 2.6kg and we’re pretty ok with that considering the specs on offer inside.

As you’d expect from a laptop this price, Acer has opted for the latest 7th-gen Intel processors and you’ll get at least at Core i3-7300HQ or optionally a Core i7-7700HQ. See: Intel vs AMD.

These, of course, come with integrated graphics but that’s nowhere near enough grunt for a gaming laptop. Inside is also an Nvidia GeForce GTX 10-series graphics card – Acer didn’t originally say which cards you can choose from, but at Computex confirmed it would be the GTX 1080.

The model we look at in New York also had a GTX 1080, though we weren’t sure it would ship with this card as standard. Indeed, you will also be able to pick up a cheaper version of this laptop with the GTX 1060.

Less interesting, but relevant, specs include up to 16GB of DDR4 memory that can be upgraded to 32GB with two soDIMM modules. There’s also up to 512GB SSD using PCIem – two drives are setup in Raid 0.

All of this means you can expect great performance overall. In fact, Acer says that with a score of 17,000 in 3DMark, the Triton 700 has better benchmark results that laptops twice the thickness.

Although higher end Nvidia 10-series GPUs can support 4K, the Triton 700 comes with a 15.6in IPS screen that uses a Full HD resolution (1920×1080). During some hands-on time, the display looks decent but some may be disappointed not to get a higher resolution for the price.