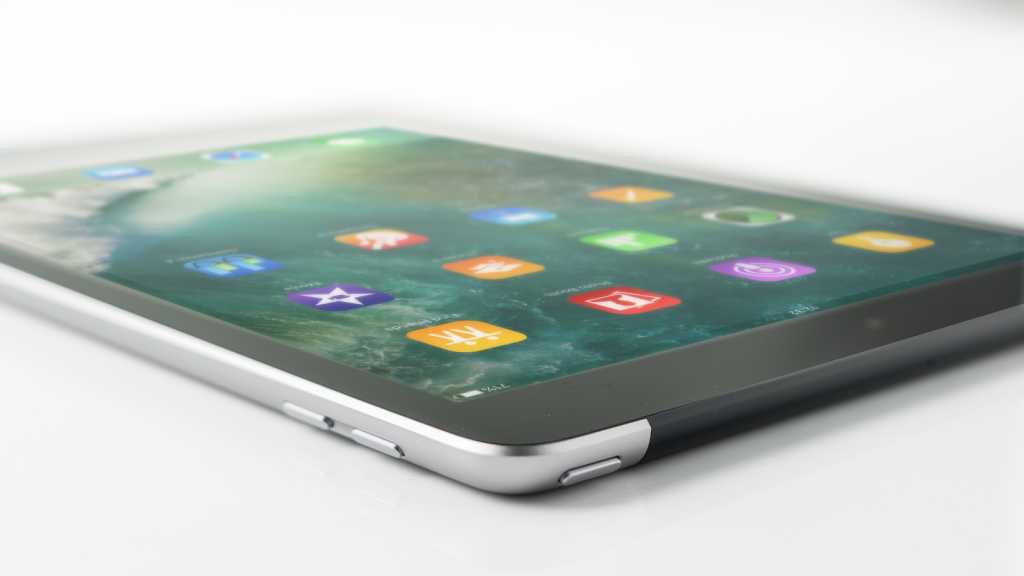 The 2017 iPad isn’t Apple’s usual big upgrade. Instead, it’s aimed at owners of older iPads who want better performance and the latest software features. It’s slightly disappointing that the screen isn’t laminated and that the cameras aren’t the best Apple offers in an iPad, but considering the price it’s good value overall.

It was rumoured for months, and then Apple announced it: a new 9.7in iPad to replace the iPad Air 2. We can understand why it’s not called the Air 3 as it’s not an upgrade in every area.

In fact, in some respects it’s a step down from the Air 2 but the price helps to make up for this.

At £339 from Apple, this is the cheapest launch price for a 9.7in iPad yet. There are rumours of an even cheaper iPad in 2018, though.

There are, of course, other tablets available. Head to our list of the best tablets to see the alternatives.

To look at, you’d think Apple had stuck with the iPad Air 2 chassis, but in fact it appears to have based the new tablet around the iPad Air 1.

It’s 7.5mm thick and weighs 469g, which is the same as the Air 1, and besides the absence of a lock / mute switch, all ports and connections are the same too.

One slight difference is the speaker grilles, which are formed from one row of holes rather than two.

None of this is a criticism, but it is disappointing to see a return to the Air 1’s non-laminated screen. There’s an air gap between the cover glass and the LCD panel which makes the tablet sound a bit hollow when you tap the screen.

You get used to it, but if you’ve already owned a tablet with a laminated screen, you’ll notice the difference.

Naturally, Apple isn’t aiming this new model at owners of recent iPads. It’s more of an upgrade option for those still using an iPad 2, 3 or 4.

Those on an iPad 2 will instantly notice the higher resolution, as it was the last iPad to have just 1024×768 pixels. Every model since has benefitted from a panel with 2048×1536 pixels, four times as many.

Powered by an A9 processor, the 2017 iPad is around eight times faster than an iPad 2 for CPU-based apps and a massive 23 times faster for games and other apps which use the GPU.

The main camera is also a lot better, with 8Mp at the rear (the iPad 2 had a 0.92Mp camera and the iPad Air 1 a 5Mp snapper). You’ll find extra shooting modes, too, including Live Photos, slo-mo and time-lapse video (which also has software video stabilisation).

At the front is a  1.2Mp ‘FaceTime HD’ camera which isn’t amazing, but is fine for video chats.

One little creature comfort that’s not found on many older iPads is TouchID. This scans your fingerprint and can be used not just to unlock the tablet, but also to authorise purchases in the App Store, on websites that support Apple Pay and to access some apps instead of using a password.

Battery life is the same as every other iPad at 10 hours. The battery has a slightly larger capacity than its predecessors, but run time for web browsing, watching videos and playing games will be roughly the same. Which is to say it’s very good indeed.

You won’t find any of the extra features from the iPad Pro range, so you can’t use an Apple Pencil with this iPad and it doesn’t have the TrueTone screen of the 9.7in iPad Pro, or its quad-speaker arrangement.

Performance, though, is great for the money. Here’s a selection of tests which show that the 2017 iPad is considerably quicker than even the Air 1 (if not always the Air 2).

With more processing power come more software features. This means you’ll get to join in the fun with all the new iMessage features you don’t get on the iPad 2, 3 and 4. There’s also Night Shift and the News app.

Plus, like the iPad Air 2, you get ‘proper’ multitasking. In apps which support it, you can run two apps on screen at the same time. So, for example, you can launch Notes then swipe in from the right and pick Safari.

This combination is just one of many and can be very useful if you’re planning a holiday or doing any kind of research as you don’t have to keep flipping between the two apps.

With a newer processor (and a 64-bit one), you’re also assured of at least a couple of iOS upgrades. It arrives with iOS 10, and will get iOS 11 when that’s released later this year. There’s no guarantee when it comes to software updates, though, and you may find that new features in iOS 11 and – further down the road – in iOS 12 aren’t available on this ‘budget’ iPad.