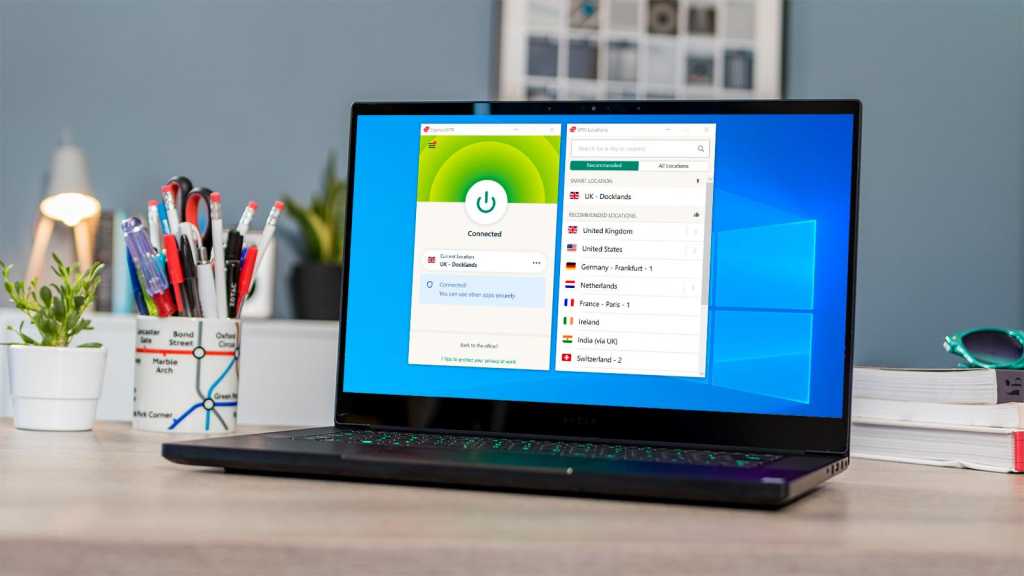 ExpressVPN lives up to its premium promise, offering a great service that does exactly what most people want it to. It’s expensive, though, so you do pay for the privilege.

ExpressVPN positions itself as a premium VPN service, and that’s why it costs more than a lot of its rivals. You won’t see any crazy deals offering 80% off as you will elsewhere, and the longest subscription is 12 months, not five years.

But is ExpressVPN worth $99.95 (around £75) per year when you can get two, three or even five years of use from rival VPN services for less? Keep reading to find out.

ExpressVPN – as with all consumer VPN services – grants an extra layer of privacy online, extra security on public Wi-Fi networks (such as in cafes and hotels) and the ability to unblock region-locked content, such as videos and websites.

In fact, unblocking it one of its biggest strengths: it claims to reliably unblock over 200 streaming service and also gives you a backup option – the MediaStreamer proxy service – if you find that the VPN isn’t unblocking DAZN, say, at the exact moment you want to watch a live sports event.

ExpressVPN also has its own encryption protocol, Lightway. This offers fast connection times and good speeds. This is important if you have a fast internet connection and don’t want your VPN slowing it down.

If you have any problems, live chat is available round the clock, too.

One of ExpressVPN’s other strengths is the range of apps it offers: Windows, macOS, iPhone, Android, iPad, Linux and Amazon Fire TV. But it doesn’t stop there. There are browser extensions for Chrome, Firefox and Microsoft Edge. And unlike virtually all other VPN services, whose extensions are merely proxies masquerading as VPNs, ExpressVPN’s extensions are more akin to a remote control for the main VPN app, so when you use them, you’re getting the full protection of a VPN rather than simply changing your IP address.

If you want a VPN primarily to unblock video and you have an Apple TV or another device for which there’s no VPN app, then ExpressVPN is a good choice. That’s because you can configure compatible routers to use ExpressVPN. That means every device connecting to the internet via the router uses the VPN connection, and this also gets around the five-device limit that ExpressVPN imposes for simultaneous VPN connections: a router counts as only one device.

Ordinarily, running a VPN connection on a router would be uninteresting to most people, but as router apps go, ExpressVPN’s is certainly the best we’ve seen.

It had a facelift in 2021, and is surprisingly easy to use. You can change server fairly easily, and it doesn’t force all of your computers and Wi-Fi gadgets to use the VPN: you can choose which devices do or don’t.

You can’t install ExpressVPN on any old router – you’ll need a compatible Asus, Linksys or Netgear – or you’ll have to buy a router with ExpressVPN already installed from a company such as FlashRouters.com.

The important things to find out are whether there are servers in the countries you want to unblock content in. Aside from that, you want those servers to offer fast connection speeds and be secure.

It’s worth mentioning that ExpressVPN allows P2P and torrenting, which some VPN services specifically forbid.

Although ExpressVPN rents its servers – as opposed to owning them and having exclusive access to them  – it uses what it calls TrustedServer technology. This is where the software runs entirely in RAM and doesn’t save any data to the hard drive. Although servers still have hard drives, these are read-only and contain only the operating system image needed to boot up the servers.

Put simply, it means anyone seizing a server (such as local authorities) wouldn’t be able to retrieve any user data from it.

It’s a commendable setup, but it’s worth understanding that rented servers aren’t quite as secure as a wholly owned and operated network where there isn’t an underlying operating system that – potentially – datacentre employees could access.

Not many VPN providers run their own servers though: almost all the big names use similar rented servers.

TrustedServer is just part of the overall privacy story. Although ExpressVPN is based in Hong Kong, the company is registered in the British Virgin Islands, a self-governing territory that isn’t subject to British laws. This offers extra peace of mind because, even though ExpressVPN (just like virtually every other VPN) operates a no-logs policy, even if some user data did somehow get saved, the local laws mean they can’t be asked to hand over data to authorities.

Most VPN services have a similar business setup, especially if they’re based in a country with unfavourable privacy laws such as the US, UK and others which share intelligence with each other.

ExpressVPN’s privacy policy states clearly (at the top of the page) that “We do not collect logs of your activity, including no logging of browsing history, traffic destination, data content, or DNS queries. We also never store connection logs, meaning no logs of your IP address, your outgoing VPN IP address, connection timestamp, or session duration.”.

ExpressVPN also runs its own DNS servers, which are also part of its MediaStreamer feature. This removes the risk that websites you look up can be seen or recorded by third-party DNS servers.

Another good security feature is the kill switch which is available in the Windows, macOS, Linux and Android apps. This stops any data being sent or received if the VPN connection unexpectedly drops, keeping you protected.

You can also tweak the kill switch to allow local devices (on your home network) to continue working while stopping all remote traffic. When the VPN connection is reestablished, the internet connection to any other app that requires it will be restored.

On top of this, split tunneling is available in the Windows, Android and macOS apps (as well as the router version). What this does is let you choose which apps use the VPN connection and which don’t. The advantage is that you can still access local websites or devices – such as wireless printers – without any problems while simultaneously accessing overseas sites via the VPN.

Another option if you don’t want all apps using the VPN connection is to install and use one of the web browser extensions to limit the VPN’s scope to only websites you’re visiting in that browser.

Performance & ease of use

ExpressVPN is very easy to use. The apps have a simple interface: just pick a country and press the big button to connect. If there’s a slight criticism it’s that login isn’t consistent across apps: the iOS app asks for an email address and password, but to sign into the Windows app you need your activation code or an email link.

All apps have the same updated look and feel and work in the same way. Android owners will appreciate the useful widget that makes it easy to connect to a server without even launching the app. Another thoughtful touch is that, in the app itself, there are shortcuts to launch apps after you’ve connected to a server, and you can pick your favourite apps for the list.

Rather than do what others have done, ExpressVPN decided not to use WireGuard but to instead develop its own protocol called Lightway.

This is now out of beta, and has been made open source, after being audited for any security holes.

ExpressVPN says it is roughly 2-3 times faster than OpenVPN, which means around 250-400Mbps. However, we were unable to verify this, as we didn’t have access to a broadband connection fast enough.

Of course, if your broadband (or mobile) connection is slower than that you won’t really notice much of a slowdown at all.

One box that most people will want ticked off is support for Netflix’s US library. And whenever we’ve checked this we’ve had no issues streaming from one of ExpressVPN’s US servers. Similarly, it will unblock Netflix Japan, Australia and France.

As mentioned, it will also unblock many, many other services and was happy to unblock BBC iPlayer when we tested it in early 2022.

If you do have any issues ExpressVPN also offers the aforementioned MediaStreamer DNS servers. You’ll find instructions for how to use it on the company’s website for various devices, from laptops and PCs to smart TVs. Essentially, you’ll lose the encryption from the VPN but will be able to unblock the content you want.

Not all VPN providers have 24/7 live chat but ExpressVPN does, and it’s great. It’s a shame this is only available on its website and not directly through the mobile apps. In those, the Help section basically lets you email tech support and wait a few hours for a response.

While the past 12 months have seen some positive things happen – Lightway is out of beta, and the apps were updated – there were also some negatives for ExpressVPN. It was acquired by Kape Technologies in September 2021.

You can read about this in more detail, but suffice to say it has a somewhat chequered history. It claims the past bad practices are gone and that ExpressVPN operates as an independent company to all the other companies (including other VPNs) that Kape owns.

ExpressVPN’s CIO was in trouble the same month, after it emerged he had – prior to working for Express – been involved in hacking governments for the UAE. ExpressVPN defended him, saying that his knowledge and skills were an advantage for a VPN company, rather than a disadvantage.

Ultimately, for most people choosing a VPN, the company ownership isn’t particularly relevant. The fact ExpressVPN is owned by Kape doesn’t affect its ability to unblock content, and may be a possible black mark  only to those looking for the ultimate in privacy. In which case, take a look at Hidden24.

At £9.87 / US$12.95 for one month’s use, ExpressVPN is about the same price as its rivals. However, almost no-one pays for a VPN month by month. Typically, providers offer huge discounts for subscribing for a year or two.

It’s worth remembering that most VPNs charge you a higher price when you subscription renews, but you’re free to choose a different VPN after the two-year deal ends and get another low price.

Don’t overlook the number of devices you can use with a VPN service. Where Surfshark, for example, allows you to use the subscription on an unlimited number of devices, ExpressVPN lets you use it on five (unless you use the router app).

ExpressVPN offers a 30-day money back guarantee, so you’ll get your money back – no questions asked – if you’re not happy with the service for any reason. You can pay by credit cards, PayPal, Bitcoin, and a wide range of other options including GiroPay and YandexMoney. So if you want to pay anonymously, you can do so.

ExpressVPN offers a great service, especially those looking to unblock video streaming services beyond the usual US Netflix, Disney+ and other US-based services.

The apps work well, there’s a wide choice of countries and servers, solid support and plenty of step-by-step guides for installation on devices where apps aren’t available and decent security features to ensure your activity remains private.

Price remains the biggest drawback, and while for some people it will be well worth it, rivals such as Surfshark and NordVPN offer similar security, good unblocking for popular streaming services and both cost considerably less when you opt for their longer subscriptions.