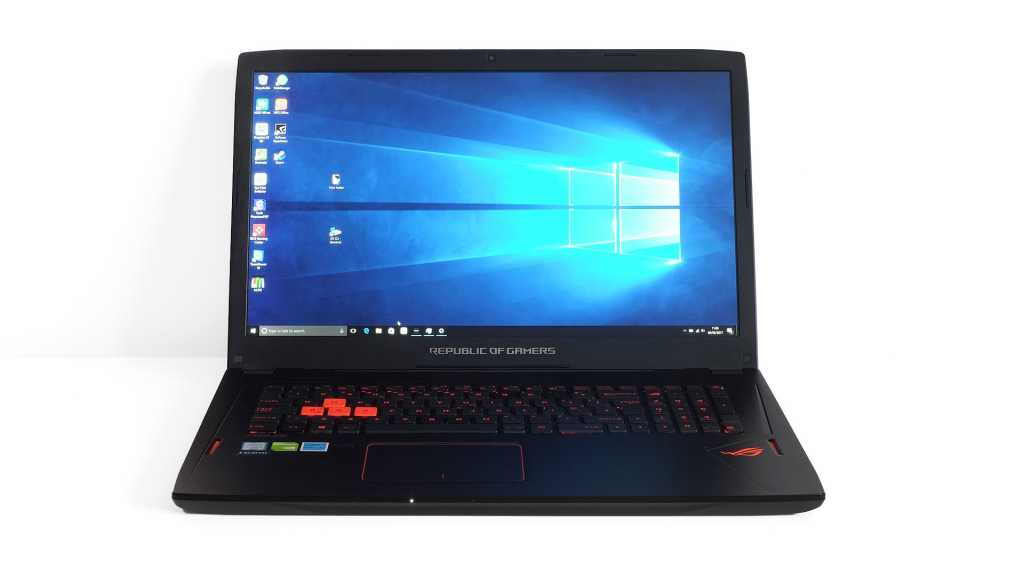 We have just one issue with the Asus ROG Strix GL702V: its trackpad does some strange things, most likely because of driver issues. Operating under the assumption this can or will be fixed, this is a great gaming laptop. It’s not incredibly expensive by today’s standards but still gets you desktop-grade gaming power, a good display, solid build and fair battery life. Thanks to the great power of Nvidia’s latest laptops graphics cards, this could well be the only gaming machine you need. And this particular one is hundreds cheaper than some others using the same GPU.

The Asus ROG Strix GL702VM is the kind of laptop you need if you’re a serious gamer but don’t have the cash to spend on the very best processors and graphics cards. It’s not cheap, but is far less expensive than the latest MacBook Pro. See also: Best gaming laptops

Don’t think it’s riddled with compromises either: its Nvidia GTX 1060 is significantly more powerful than the previous-generation GTX 980M, and you’d have to spend almost £2000 to get a laptop with one of those.

You can buy the the Asus ROG Strix GL702VM for £1129 from Amazon. As we’re talking about a gaming PC, and one released as the pound if weak, that only gets you a mid-grade core spec.

It has a high-power variant of Intel’s Core i5 CPU, 8GB RAM, a 128GB SSD and 1TB hard drive. You may find gaming laptops with more RAM and a faster CPU at a similar price, but to buy one would probably be a mistake. For gamers, GPU power means more than almost anything else.

Asus also offers a higher-end version of the GL702VM that upgrades the RAM to 16GB and the CPU to an Intel Core i7. It costs £1349 from Saveonlaptops, a £150 upgrade.

Both variants come with a one-year collect and return warranty.

For the last couple of years, Asus’s G752-style laptops have provided models easy to recommend. The Asus ROG Strix GL702V we’re reviewing here isn’t necessarily worse, but it is quite different.

This is a much slimmer and lighter laptop than the G752, reviewed. It makes handling heat and noise trickier, and leaves the GL702V with a shallower keyboard, but many people may find this laptop far easier to live with.

Its 17.3in screen will seem imposing if you’re used to 13in models these days, but its weight and thickness are not. At around 2.7kg, it’s too heavy to carry around all day, not to mention too large to fit in most rucksacks. However, moving it from room to room isn’t something to dread, which can be the case with some 4kg gaming beasts.

That’s not to suggest the Asus ROG Strix GL702V is ashamed of its gaming habit, though. The slimmer frame rules out any truly outlandish fan outlets, but you do get plenty of flourishes from Asus’s Republic of Gamers series handbook.

The logo and a pair of decorative slashes into the lid light-up red, as does the keyboard backlight. There are similar non-lit flashes of red on the keyboard itself, and even the underside.

Typical of almost all high-end gaming laptops, the Asus ROG Strix GL702V has a metal lid but the rest is plastic. There’s a brushed-like finish to the keyboard surround, but the main design intent here is moody-looking red on black. No-one’s trying to pretend this is a gaming ultrabook.

The Asus ROG Strix GL702V doesn’t have an optical drive, however, which you will still find on Asus’s largest gaming laptops. Connectivity is comprehensive, though.

The sheer breadth of sockets a laptop has to include to get this coverage is significant. On the left side are a mini DisplayPort with Thunderbolt, HDMI, USB-C an Ethernet ports, and a USB 3.0.

On the right are two additional USB 3.0 sockets and a full-size SD card slot.

There’s not much left to ask for.

There’s a well-spaced but fairly conventional laptop keyboard, without the extra travel seen in heavy-duty gaming laptops like the Asus G752 and Alienware 17. Key action feels high-quality and there’s a pleasant resistance to the keys, but predictably slightly shallow.

We find it comfortable to type away day-long on, though, and anti-ghosting tech lets you tap keys as fast as you like without any missed presses.

It has a red backlight, matching the other bits of flair on the laptop. If you’re in a situation in which you can’t use the light, the WSAD keys are bright red to make them stand out even if lighting is poor.

Necessary? Probably not for most, but as Asus bothered making this move someone must have asked for it.

The GL702VM’s large 17in frame also provides room for a full NUM pad, although the row of dedicated macro keys seen in some of Asus’s largest laptops is absent.

Similarly, the trackpad is fairly conventional. It’s relatively small for a laptop this large, but no gaming laptops have huge trackpads, under the assumption many will plug in a mouse anyway.

The trackpad’s surface is very smooth, and uses integrated buttons that aren’t too noisy or difficult to click. However, in its current state does have an annoying driver issue that causes the cursor to leap across the screen at times, seemingly a result of too-high sensitivity confusing the presence of a second finger for a swipe. Be prepared to have to fiddle around with drivers and/or Windows 10 settings to get the GL702VM’s pad working as intended.

With a 17.3-inch display, the screen doesn’t look anywhere near as pixel-packed as some of trendier slim and light laptops found at the price. However, this is still arguably the best resolution for the machine.

Its graphics card can handle some demanding games at QHD resolution, but for 4K gaming you’ll need more power than this laptop can provide.

This is an IPS LCD display with a matt finish, turning reflections into much more diffuse, much less distracting, splodges of light.

Display quality is very good, if not quite among the very best laptop screens.

For example, its top brightness is 320cd/m2 where we recorded 380cd/m2 from the Asus G752. The GL702VM’s is less searing, but as these laptops are unlikely to be used outside in bright sunlight often, its no big deal. 320cd/m is still pretty bright.

Contrast too is a little below the 1000:1 we like to see in a top-end laptop at a solid 812:1. Like other matt-finish laptops, you’ll notice this as a slight blue tint to the screen’s backs when the backlight intensity is high.

Colour performance is again good but not standard-setting, covering 85 per cent of the sRGB colour standard. We’d be hard-pressed to notice any undersaturation with our eyes, though, particularly as the GL702VM’s screen also covers colours outside the sRGB spectrum too.

For those into screen performance, it covers 62.4 percent of Adobe RGB and 71.9 percent of DCI P3.

If our reception of the GL702VM’s screen sounds lukewarm, it’s only because it’s roughly what we expect of a high-end laptop. It’s still a very capable display.

The screen has the chops to fit in with its high-end rivals, but in the variant we’re using at least, the GL702VM has a real mix of entry-level and high-end hardware.

8GB of DDR4 RAM and a 128GB SSD are the minimum you’d want in a system this expensive. There’s a 1TB hard drive too, but as it’s so much slower than the SSD you may be left juggling games to keep your most-played ones on the solid state storage. Games installed on the SSD will load quicker.

The CPU is similar. It’s a Core i5-6300HQ rather than an i7, generally favoured in gaming PCs. It’s a quad-core CPU so still faster than the dual-core i7 processors you’d see in a £1200-1400 ultrabook, but as our gaming tests show, the extra CPU power may be worth the upgrade.

Running the built-in Thief benchmark, the CPU actually bottlenecks performance, managing an average 66.4fps at 1080p ultra settings, and 75.5fps at 720p, low settings. This is to an extent a quirk of the benchmark, which is very CPU-intensive, and the fantastic results when playing Alien: Isolation are more indicative of how good a gaming machine this is.

Alien:Isolation runs at a blistering 197fps at 720p, low settings and a, well, still-blistering 135fps at 1080p max settings. This is significantly faster than the results of the first GTX 1060 laptop we reviewed, presumably because the drivers have improved so much since launch.

For most gamers who want a 1080p gaming laptop, the Strix GL702VM is exactly the sort we’d recommend. GTX 1070 and GTX 1080 laptops are eye-wateringly expensive, and their power only currently useful in models with screens of resolutions in excess of 1080p.

It’s difficult to overstate how much better the GTX 1060 is than last year’s GT 960M. Not only are the new laptop cards much closer to their desktop counterparts than before, Nvidia also made huge performance strides more generally with the Pascal generation.

Despite holding the Thief test back, the Intel Core i5-6300HQ processor is also very capable. It’s more powerful than the CPU of the £2000 MacBook with Touch Panel, for example. You can edit video with this laptop. It scores 9393 in Geekbench 4, and you ca expect a score around 12000 points from the Core i7 £1349 version.

One consequence of a relatively slim frame, considering the powerful GPU, is that at times of strain the fans have to work quite hard. Most of the time the Asus ROG Strix GL702V is near-silent, and give out a fairly light inoffensive whoosh during light gaming. After a while the underside and area above the keyboard get warm, eventually spreading into the keyboard itself, but no parts became worryingly hot during testing.

However, max the system out and after 10 minutes or so the fans do kick up to a higher gear. There’s no high-pitch whine, but the noise is noticeable.

The speakers do have a chance of competing with it, though, thanks to a bulky, thick tone. There’s more bass than the average, and a smooth mid-range that’s better for games and movies than a bog-standard thin laptop speaker.

Treble clarity is limited, mind, making the GL702VM sound quite sultry and dark next to something like the MacBook. At times we were also left wishing for 10-20 per cent extra volume, but we imagine many of you would use a headset or headphones for any serious gaming anyway.

The use of an HQ-series CPU rather than a low-power U-series one instantly tells you this laptop’s battery life is not going to be stellar. However, it is still better than some gaming laptops, lasting 4 hours 55 minutes when playing a 720p video on loop at 120cd/m screen brightness.

That’s fairy good for a laptop not designed for ultra-portable use, enough to last for long meetings, train journeys or whatever reason you might have for needing to be away from the plug for a while.

You won’t get that sort of stamina when gaming, though. Expect 90 minutes, max, when the GL702VM is maxed-out or close to it.