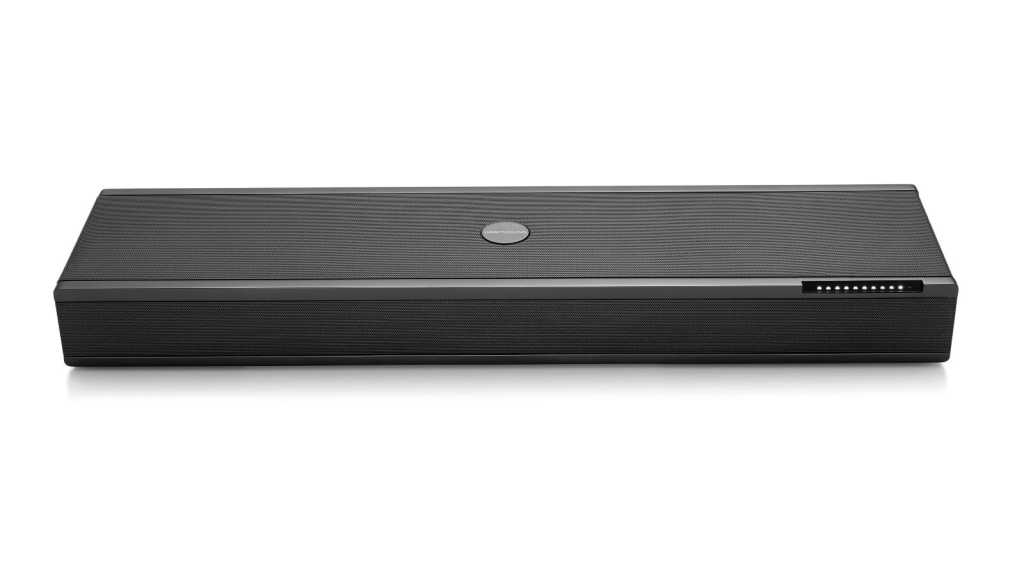 The ONE P70W is a great speaker, whether you use it as a traditional TV soundbar or stick it on a shelf and use it to play music via Wi-Fi or Bluetooth. It’s a shame that Wi-Fi adds £100 to the price compared to the ONE P70, but even at £399 it rivals the quality of speakers costing even more.

Orbitsound is a British company that makes great-sounding speakers. The ONE P70 is the first of its new generation of what it’s calling an intelligent multipurpose audio solution. But to you and me, it’s a Bluetooth soundbar that can be mounted in various positions. There’s also a version with built-in Wi-Fi which is called the P70W.

Both models look identical and are a combination of the firm’s SB60 sound base and the more recent A70 sound bar. That’s because they have an integrated low-profile subwoofer like the SB60 rather than a separate box like the A70.

But you can position the ONE horizontally like a traditional soundbar, or sit it on its rear edge on a shelf so it’s vertical. It can also be wall mounted above or below a TV, and all the fixtures and fittings for doing this are included in the box.

You can buy ONE P70 from Amazon for £299, but it’s no longer available  direct from Orbitsound as it’s no longer a current product. There are also white and great-looking Bamboo versions which are the same price.

It’s a lot cheaper than the airSOUND A70 which costs £499, and it undercuts other soundbars from Bose and Sonos which are twice the price.

If you want the version with built-in Wi-Fi, which is the current model, that’s available from Orbitsound and John Lewis but it’s £100 more at £399.

Again, it comes in black, white or bamboo but the latter two can only be purchased from Orbitsound.

The P70 was the first product to be designed entirely in house, and it looks quite different from the older A70. The P70 weights a reassuring 5kg and measures 700x173x77mm, and it’s the same for the P70W.

The cabinet made from ‘engineered’ wood and covered at the top, front and sides in neat metal grilles. The Orbitsound badge can be popped out and rotated 180 degrees so the logo is the right way up no matter which speaker orientation you choose.

On one end are buttons for controlling volume and input, and a simple (and also reversible) LED display shows volume, bass and treble levels along with green, red and blue indicators so you can tell which input is being used.

The display is mounted at 45 degrees to make it visible regardless of orientation, but the reflective surface can make it tricky to see unless you’re in front of the speaker.

Underneath is a recess into which power, analogue and digital cables can run. The power supply is an external box, and the two wired audio inputs are 3.5mm minijack and TOSLINK optical. Cables for both are included.

There’s no HDMI input or output, as Orbitsound says there’s no benefit for most people – and it keeps costs down. The third input is Bluetooth, so you can pair your phone, tablet or other device and play music wirelessly.

If you buy the P70W you get Wi-Fi and a companion app simply named ‘Orbitsound’ for iOS and Android. This allows you to connect the speaker to your home Wi-Fi and stream music either from your phone or tablet or from a service such as Spotify, TuneIn, TIDAL and others. 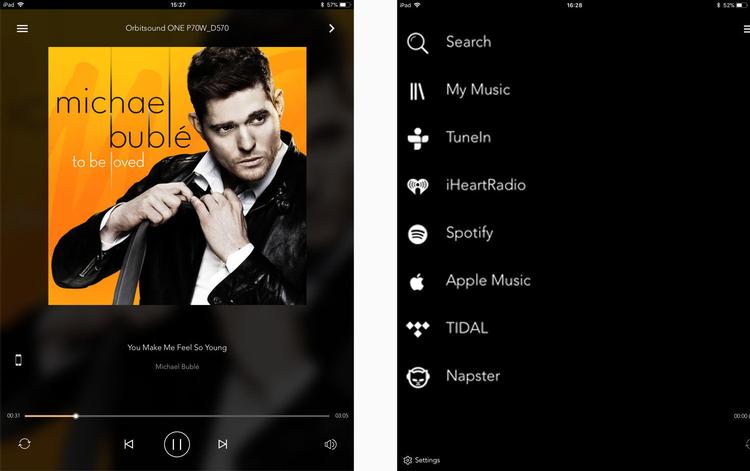 On the bottom are bosses for 200mm VESA mounts for wall mounting, and screws and wall plugs are included.

Inside is a 5.25in subwoofer – the same size as in the SB60 – and four custom-designed 2in woofers. Two of these are placed right next to each other in the centre at the front, and the other two are placed on each end. These are Orbitsound’s signature: airSOUND. The middle speakers provide clear vocals, while the side speakers deliver the ‘left’ and ‘right’ information for stereo sound. This arrangement helps to avoid the traditional deadspots when listening off-centre, and also serves to create a much wider soundstage than you’d expect from a self-contained speaker bar.

There are a couple of other nifty features. One is that the speaker can learn buttons on a standard infrared remote control. So you can use buttons on your TV or set-top box remote to control the volume, input and power rather than having to grab two remotes just to watch TV.

The other is an optical volume boost which can be enabled if your TV’s output is too quiet.

You will need to use the setup guide to do anything more than adjust volume or switch inputs, though, because the minimalist display and minimal number of buttons mean you need to use special button combinations.

Thanks to the two front drivers being so close together, clarity of vocals and speech is excellent. Whether you’re watching TV or listening to music, the ONE is crisp and focused.

The smaller cabinet means that bass isn’t quite as powerful as the SB60, but for a compact all-in-one unit it’s very good. If bass is your priority, you may be better off with a Sonos Playbar (£699) or a sound bar with a separate subwoofer, such as the A70 (£499).

However, the P70 and P70W succeed in their aim to be a self-contained unit with great sound quality.

And as ever, the airSOUND part does its job admirably. It widens the soundstage way beyond what you’d expect and delivers stereo audio that sounds more like a surround-sound system.

Quality doesn’t deteriorate at quiet or very loud volumes, although we did find you have to turn it up louder when in the vertical orientation. This stands to reason, as there are no speakers in the top surface.

You priority might be a soundbar to use mostly for video, but it’s also great for music too.

When using Bluetooth, it’s easy to pair with your phone and in our tests, we found it reliable with no cutting out or dropped connections.

Similarly, if you go for the P70W, it’s simple to connect it to a Wi-Fi network (it takes less than a minute) and you can then use the app to play from Spotify, TIDAL or one of the other streaming services on offer within the app. If you’re using an iPad or iPhone that includes Apple Music, while on Android it’s Google Play Music.

We struggled to get TuneIn to work, though, as every search we tried returned an empty list of results.